A new TTC streetcar iPhone app has joined the fray, and after a quick test, I'm inclined to give it two thumbs up. Called simply Next Streetcar, this new offering comes just weeks after the release of the well received Rocket Radar, designed by former blogTO contributor Adam Schwabe. Given this proximity, and the fact that we've already reviewed Rocket Radar, it seems a comparison is in order.

Perhaps the best quality of Rocket Radar is the simplicity of its interface. After selecting the app, it quickly determines one's position and pinpoints the arrival time of the next streetcar prominently at the top of the screen, which then counts down in one-minute intervals. With a simple swipe, one can also get a ETA on the next five streetcars, should he or she require that information.

Next Streetcar's interface is also straightforward, if not quite as intuitive. But the little that one gives up in first-time ease of use, he gets back in added functionality. One reason Rocket Radar is so easy to use is that it doesn't offer one the ability to manually select a route and stop. Not so with Next Streetcar. By tapping on the listed route, the app will take you to a menu that lists all streetcar routes in the city. This is potentially a big plus if one is using the app to chart out future transfers or trying to determine the arrival time of a streetcar at a location different from the one he or she currently occupies.

To be fair, Rocket Radar does offer a selection of nearby routes that one can swipe through, which might be all one needs. After all, even though Next Streetcar will, for instance, tell me when the next four cars are departing from the Queens Quay LRT Station, if I'm located at St. Clair and Oakwood during rush hour, this isn't particularly relevant information because these cars will have all come and gone far before I arrive. In the evening when service has thinned out, however, this could be quite nice to know. 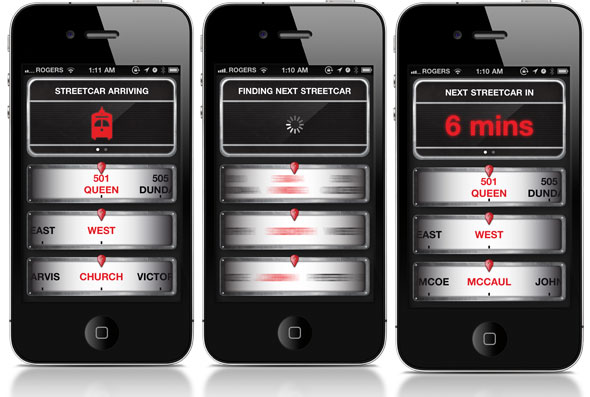 One of the other main differences between these two apps is the next car arrival countdown. As mentioned above, Rocket Radar provides this information in one minute intervals. Next Streetcar, on the other hand, offers this information by the second. Should one be considering a absolute last minute dash to a streetcar stop, I suppose this might come in handy, but this feature is not without its problems.

Forgetting the fact that it tends to exaggerate the slow passage of time while in the midst of a long wait, the second-by-second countdown isn't always perfectly accurate. During my tests of the app, I noticed that it would often jump to the next car's arrival time before the initial countdown had reached zero. I also noted a few occasions when it adjusted itself by few seconds here and there mid-countdown. Based on these observations, I tend to prefer just receiving the info in the one-minute intervals offered by Rocket Radar.

As far as price goes, Next Streetcar is currently being offered at 99 cents to Rocket Radar's $1.99. Make of that what you will, but they're both less than a token, so I'm inclined to just write off price as a determining factor all together.

So what's the verdict? Based on my needs, I'm forced to call it a draw. Next Streetcar gets bonus points for its added features, but I'm not entirely convinced of how often I'd actually benefit from this increased functionality. And given the mini-problems I had with the to-the-second countdown, I tend to favour the interface of Rocket Radar.