SeeClickFix was founded in New Haven, CT back in September of 2008 to allow users to report and track 311 issues (a.k.a. non-emergency urban problems) in given a community through a simple to use web interface. In the years that have followed, the website has slowly but consistently grown, expanding to include a mobile app and to cover cities across the US and eventually to Toronto (and Canada) courtesy in part to Joe Pantalone.

The idea is a pretty straightforward one -- by providing a platform for both citizens and governments to monitor minor problems, the chances of addressing them should increase and a more participatory model of democracy might be fostered -- but having found out about the site only recently, I was curious as to how well it's working in Toronto.

Upon a first visit, one realizes rather quickly that this isn't sexy stuff we're talking about here. Potholes, damaged signs, broken park benches, and graffiti are typical problems that are reported. But regardless of whether or not such issues are boring, the fact of the matter is that they do have to get fixed and will remain a nuisance until this has been done. So the question is whether SeeClickFix actually makes this process a whole lot easier than other options out there.

Theoretically speaking the answer to this is a yes; if the project functions the way it's supposed to -- which basically means that the citizen, community groups and municipal governments remain engaged and motivated to hold up their end of the bargain -- this is an excellent example of the way in which social networking technology can be used to improve communities. 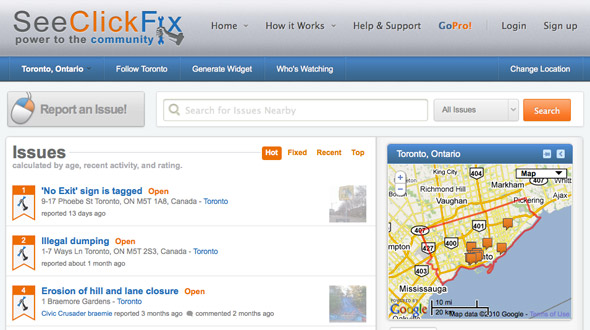 But along with the fact that SeeClickFix Toronto has a relatively low level of participation on the citizen end (perhaps to be chalked up to its newness), one of the problems it must face is keeping the "fixers" motivated. Although citizens and community organizations (like a BIA, for instance) can address some of the problems reported on the site, the neutral nature of the platform might jeopardize the degree to which local governments attend to the problems reported.

Although Toronto 311 is a "watcher" of problems on SeeClickFix -- that means one gets notifications about problems in a given area -- there's something decidedly more passive about that than actually getting a phone call or, to a lesser extent, a direct message on Twitter. In those scenarios, a direct dialogue has been initiated that ties both the person who reports the problem and he or she who receives that report into a slightly more committed relationship. If something's not dealt with in a timely fashion, for instance, there's the ability to hold someone accountable.

Perhaps, however, that's a little cynical. SeeClickFix reports a 40 per cent success rate for solving reported problems (overall, not necessarily in Toronto), and as it builds steam here, one would think that it'd be hard to ignore. Not only that, SeeClickFix argues that the ability to report anonymously will increase some people's willingness to participate. In the town of its founding, it has met with great success, so the model certainly has potential.

But, contrary to the popular assumption "if you build it, they will come" it seems to me that they key to SeeClickFix's success is getting the word out that it exists outside of New Haven and Philadelphia (where it's also done well). Toward that end, the mobile app -- which uses a smartphone's camera and geo-data to make the reporting process as easy as possible -- might go some way toward seducing people to try the project out.

Well, that and getting the 40 per cent success rate up.