How's Rob Ford doing on Twitter (and does it matter)?

Throughout the 2010 mayoral campaign in Toronto, Twitter (and social media in general) was one of the chief tools that the candidates used to disseminate their platforms. And more. Few will forget the notorious @QueensQuayKaren, a fake account/identity created by the Rob Ford team in an effort to do damage control in the wake of the Dieter Doneit-Henderson scandal.

It was a savvy if morally questionable use of Twitter, and if nothing else, it got me wondering how Ford (and his team) might employ social media strategies in the role of mayor. His predecessor, David Miller (@iamdavidmiller), was of course, a big-league tweeter, with over 14,000 followers and 5000+ tweets to his name when he left office. In fact, more and more mayors have taken to Twitter as a way to stay connected with the residents of the cities they represent and govern.

So how's @TOmayorford doing so far?

Well, forgetting the possibility that his team may have an army of fake accounts tweeting away about "respect for tax payers" and "efficiencies," the answer has to be "meh." Although his account is somewhat active, I'd be shocked to learn that Ford actually sent out any of the 41 tweets listed under his handle. Nope, this one smells likes its the domain of an intern or low-level staffer. The majority of the tweets are announcements about appearances, City Hall news, and thank you notes. Not exactly captivating, interactive stuff.

This shouldn't come as much of surprise, as it would seem pretty obvious that most of Ford's base is not on Twitter. But, all the same, there's no doubt that this particular social media platform offers an excellent opportunity for politicians to appear engaged and to connect with a small but generally influential (i.e. media types) portion of a given city's population.

In light of this, let's have a look at what some of Ford's colleagues in other cities are up to. 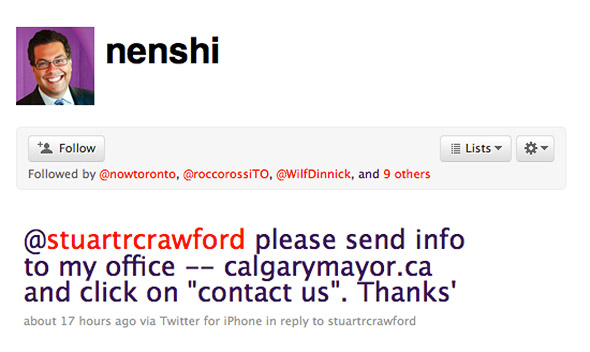 Rob Ford -- Mayor of Toronto
@TOmayorford
Following: 283, Followers: 2730, Tweets: 41
Style: In a word, boring. This is the type of Twitter account that's maintained because someone thinks it's necessary to do so, not because there's a whole lot of interest in actually using it as a communication tool.

Naheed Nenshi - Mayor of Calgary
@nenshi
Following: 756, Followers: 10,179, Tweets: 4,019
Style: Personal, interactive, responsive. Nenshi tends to shy away from tweeting official announcements and the like in favour of carrying on numerous conversations with his constituents.

Gregor Robertson -- Mayor of Vancouver
@MayorGregor
Following: 1,036, Followers: 9,688, Tweets: 692
Style: Although consistently active, Robertson uses his Twitter stream mostly to inform his followers about official Vancouver-related news that comes out of city hall. That's not a bad thing, but he's clearly less interactive than some of the others on the list.

Peter Kelly -- Mayor of Halifax
@mayorpeterkelly
Following: 313, Followers: 1,170, Tweets: 234
Style: Kelly tweets around once a day, mostly about Halifax events and the weather. Not a whole lot of personality here, but every once in in a while he gets excited about something (last example: a skating oval). 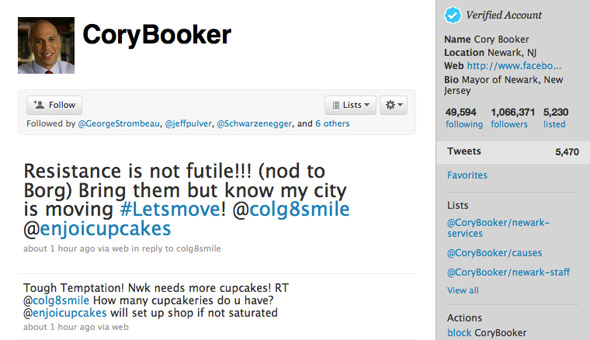 Cory Booker -- Mayor of Newark, NJ
@CoryBooker
Following: 49,582, Followers: 1,066,367, Tweets: 5470
Style: Mega-user. I'm not sure if Booker takes the time to "follow" everyone personally, but his account is the most of active of any mayor that I've seen. Tons of retweets, links and personal info shared (he's on a diet, FYI). The model mayoral feed.

Michael Bloomberg -- Mayor of New York City
@MikeBloomberg
Following: 84, Followers: 43,851, Tweets: 867
Style: Not be confused with @NYCMayorsOffice, Bloomberg has lots of followers -- it's New York, after all -- but he's not particularly interactive. At 867 tweets, he sends out updates regularly, but many of these are retweets from other official NYC Twitter accounts. The rest tend to be announcements regarding city affairs and enticements to tourists to come visit the city. 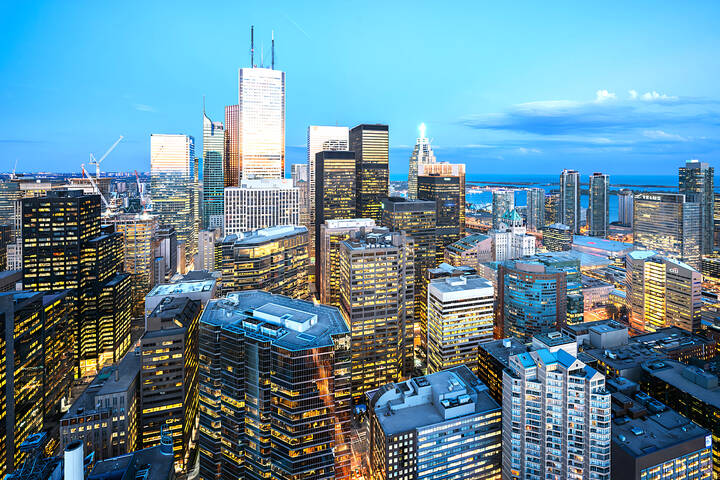