It's that time of year again - when Tweets are fewer and far between, Facebook photos are all from holiday parties, and year in review articles are aplenty. When I look back at last year's list of the Top 10 Toronto-based web startups it's interesting to see how some of the companies have progressed. Some, like backtype, are still plugging away in Silicon Valley. Some, like Rypple, had a big year - they raised over $7 million in new funding. And some were purchased, including Bumptop, which was acquired by Google in May (not too shabby). This year's list is similar but with a twist - we're still featuring the top 10 web startups, but we're also adding a few categories for companies who made a splash but don't necessarily fit the web startup mold. Read on for my list of the Top 10 Toronto-based Web Startups of 2010.

If you missed the war of the real-time photo-sharing applications this year let me fill you in. If you're a smartphone user it's annoying to take a photo and then upload it to each of your social networks individually. This year startups like Instagram developed mobile and web applications that allowed you to snap and share a photo simultaneously. One of the main competitors in the space is Toronto-based Burstn, which was started by Dave Senior and Josh Davey, launched in August, and is a recent graduate of Ryerson's Digital Media Zone. Having tried their competitors, I can say that Burstn's online gallery, geo-tagging and instant sharing make it stand out from the group. Now to convince the rest of the world. 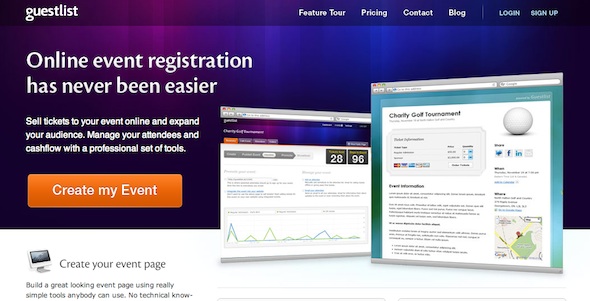 Chances are if you attended an event in Toronto this year the event page was powered by Guestlist. Event registration is a crowded space, with competitors like Eventbrite and Meetup, but Guestlist has done a great job of proving its value with it's clean, slick interface and intuitive set-up process. If you're hosting an event you can create an event page for free in less than five minutes, and you can even integrate the page into your own website. The company launched in July 2009 but really took off this year - two of the founders joined full-time and they started charging users. They're also about to pass 4,000 events hosted on the site to date.

I like companies with good taglines, and MyCityLives has a great one: taking you one step beyond Google Street View. I first wrote about their online video platform in October as part of my roundup of local location-based companies, and they've only continued to garner buzz. The company launched in beta in May 2010, and since then over 700 videos of the city have been uploaded with over 80,000 views. Founders Adam Ben-Aron and Adil Dhalla also secured $500,000 in funding from the Canadian Media Fund in October, and doubled the company's size to a whopping four people. Next year the team will focus on building mobile applications and building their presence across Canada.

Bringing in revenue after mere months is often a pipe dream for web startups. So that's why local company StickerYou has earned a place on this list. After launching earlier this year they've already processed 10,000 orders online for their custom stickers and sticker sheets, and revenue continues to climb. They've also partnered with big brands including DC Comics and Ford. Now if only my sticker collection when I was little was as lucrative...

Toronto-based online peer-to-peer lending community CommunityLend has been in the works for years but made its official debut in February 2010. Since then the company has attracted over $7 million in loan demand and has commitments to over $11 million in lender capital. They announced a partnership with AutoTrader and launched a new product extension at FinanceIt.ca. And like Howard Stern and Oprah before him, founder Michael Garrity even has his very own radio show, The Finance Hour.

One of the later launches this year, Wave Accounting debuted its online accounting application for small businesses on November 16th. Founder Kirk Simpson recently announced that they signed up 1,000 customers in less than a month. The company has been profiled in media across North America, and has been endorsed by local entrepreneurs including Mark Evans. Oh, and they've raised a cool $1 million in angel financing.

If revenue is hard for startups to achieve, then millions of pageviews is even harder. Local online trend community TrendHunter makes it look easy, with 350 million pageviews to date and over 31 million monthly. Founder Jeremy Gutsche is a constant fixture on the international speaking circuit, his book Exploiting Chaos was a bestseller this year, and he's featured in prominent media on almost on a daily basis talking about what's on the forefront of cool. Not bad for a company that touted baby toupees as the next big thing.

If 2009 was the year of companies getting on Twitter, 2010 was the year of companies demanding analytics. The question of the ROI of social media was tackled by web analytics companies aplenty, including Canada's own Radian6. Local startup Sysomos, founded by University of Toronto professor Nick Koudas, entered the fray in 2008 but saw their greatest success this year with their acquisition by MarketWire. If that didn't catch your eye then perhaps one of their surveys did - the results appeared in countless media outlets this year, including Mashable and the Huffington Post.

Viigo started 2010 as just another growing startup taking advantage of the mobile application trend. The company's BlackBerry application aggregates information you care about into one dashboard, whether it's the weather, sports scores or breaking news. So it wasn't a huge surprise when CEO Mark Ruddock announced in March that the company was acquired by RIM for an undisclosed amount.

TalentEgg, a careers site for new grads, has really broken out of its shell this year (groan). The company grew its revenue and client base by 100% in 2010, and added big names like Accenture and IBM as clients. They also grew their partnership with The Globe and Mail, working with them to provide content for their careers section as well as their Canadian University Report. They're almost at 750 articles on their online magazine, and their highest traffic day ever coincided with the launch of their Focus on Accounting series.

When I was researching this list I realized there were a few trends and companies that made a big splash this year but didn't fit into the web startup mold. So this year I'm adding a few honourable mention categories to recognize some of Toronto's most buzzed-about companies:

Startup Weekend events around the world have launched startups like Foodspotting, and Toronto was up to the challenge of producing the next hot mobile app. Local entrepreneurs including Satish Kanwar, Matt Rintoul and Brian Gilham built Task Ave., a location-based reminder application, in just two days. They won the competition, and weeks later they were presenting the idea to renowned NYC investor Fred Wilson. They recently launched the app in private beta, and will be opening it up in the new year. Good thing, because I always forget to buy milk when I'm out.

Two other local entrepreneurs, Brett MacLean and Mark Pavlidis (who is also working on Task Ave.) developed Tweetagora, a popular Twitter application for iPhone that lets you filter out unwanted terms or users, and build "agoras" based on people, terms and hashtags you're interested in. The duo presented the app at the Chirp conference in San Francisco in front of some of Silicon Valley's biggest names, including Twitter co-founder Evan Williams and Biz Stone.

Mobile developers of the year: Polar Mobile and Endloop Studios

If you have a Smartphone chances are you've used an application built by Polar Mobile or Endloop Studios. Endloop founders Ken and Garry Seto took advantage of the iPad's release earlier this year with their iMockups wireframing application, which was listed by tech guru Robert Scoble and publications like Mashable as one of the top iPad apps. They recently received funding from Montreal's Year One Labs, the fund's first investment.

Though the company's Endloop X social gaming platform will be based in Montreal, the company is still developing applications in their new King West office in Toronto. Local company Polar Mobile also had a banner year led by founder Kunal Gupta, from their international expansion, their World Cup application, or their partnerships with big names like the NHL Players Association. They company now has over 400 apps used by seven million people in over 100 countries.

Unless you didn't touch a computer this year you were probably inundated by the numerous group buying sites that invaded Toronto. And the Toronto-based entrants each made a splash in their own way - from TeamBuy's appearance on Dragons' Den, to FabFind's $10 iPad fiasco, to TeamSave's partnership with Kijiji. They also spawned a new trend - the daily deal aggregator. Sites like OneSpout and DealPage exist simply to collect the deals into one place - meaning that consumers (including me) have cashed in on deals all year long.

So there you have it - the top 10 web startups of 2010, with a few extra categories for good measure. Who would you add to this list? And who do you think will make the list in 2011? I have my eye on companies like Connectsy, DateIdeas, Guard.ly and Themify - and I'm sure we'll see some hot ones launch next year.