The most innovative tech companies in Canada

When I think of innovation I think of scientific breakthroughs, new inventions and emerging technology. What I don't think of is men and women in suits. But at yesterday's Canadian Innovation Exchange there were plenty - investors and corporate bigwigs there to mingle with entrepreneurs, discuss the state of Canada's innovation culture, and get insight into the next big thing.

The one-day sold-out conference was held at the MaRS Discovery District, itself known for fostering innovation and new technology, and was billed by event organizers Achilles Media as "a gathering of the key players in the innovation economy which will showcase and accelerate the development of the great technology-based innovation emanating from Canada." A long-winded way of saying "we'll show off some startups to other entrepreneurs and fancy people."

The most interesting parts of the day was the Canada's Hottest Innovative Companies showcase. The participating companies, all of whom applied to present early this fall, were selected to present a six-minute demo of their product or service, and answer questions from panelists who included the head of Facebook Canada, Jordan Banks. The three different showcases represented three different industries - digital media, information and communication technology, and clean technology.

The companies came to present from all across Canada - from Brandon, Manitoba's 360 Replays, which provides real time 360 degree camera coverage of an event, to Barrie, Ontario's gShift Labs. That company makes Search Engine Optimization software that helps marketers optimize an entire web presence.

Founder Krista LaRiviere, a serial entrepreneur who founded and exited Hot Banana, says the software helps marketers to rank better in organic search results, but it also factors in social media, press release optimization and web analytics - something she says is an $8.1 billion industry. She says their software is an alternative to an SEO consultant, and is much cheaper (plans start at $149/month during their beta period). 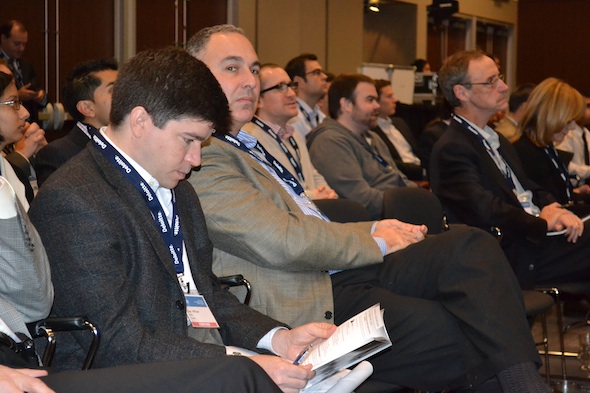 Another demo company was Wantsa, which was billed as "what Groupon will grow up to be" - a combination of group buying and an advertising platform. Since Groupon just turned down a multi-billion dollar acquisition offer from Google I'd say they're pretty grown up already.

Wantsa was founded before the group buying craze emerged though, in 2006, and went to market in 2007 (thought it started as a recommendation engine app on Facebook). They now have 22 employees and have raised $5 million in private funding. The site allows businesses to create a deal (prepaid deals and discounts, survey rewards, etc) and post it for consumers. The company also licenses and private labels its technology to media organizations.

A really big trend that emerged this year is the concept of ad re-targeting, online advertising that's based on a consumer's previous actions. For example if you visited Company X's website, then navigated away to a big site like CNN.com, retargeting allows Company X to purchase ad space on those big media sites on a per-ad basis to target you there.

It's more effective since you've already established intent by visiting the company's website (I've been retargeted by companies including Vzaar and Milo, and it definitely throws you off). One company seeing a lot of success with it is Retargeter, which is based in San Francisco, but local company Chango has also developed technology to help companies do "search marketing beyond the search engines."

The company's CEO, Chris Sukornyk, explained how their technology allows companies to target consumer intent using keywords. Companies can import their keywords from Google AdWords, and Chango finds users by matching those keywords to their past searches. They've partnered with several publishers and are currently collecting over three billion searches per month (they'll be as big as Bing by the end of the year, though that's not saying much). They also developed a new technology called real-time bidding that allows them to buy individual ads on content sites (hence how a small company's ad can end up on CNN's website). 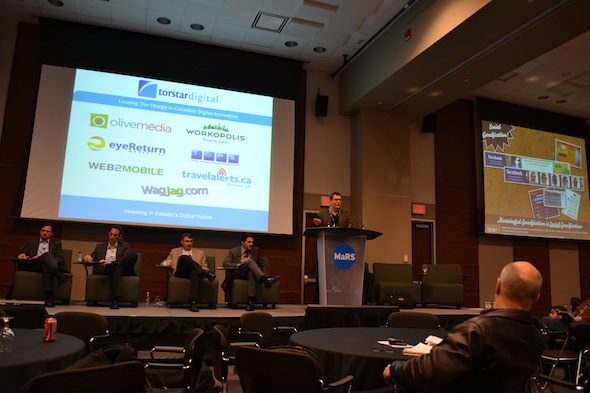 Other notable presenters included trend-spotting website Trendhunter, which was started by local entrepreneur Jeremy Gutsche and now gets 31 million pageviews monthly; next-generation calendar application Tungle, which is based out of Montreal and is used by 40% of Fortune 100 companies; and Xtreme Labs, an application company that is looking to focus on healthcare (would you swallow a pill embedded with a microchip if it would send your health information to your mobile phone? We'll see).

While the three showcases weren't a competition, CIX did name one company from each as "honoured with distinction." They were gShift Labs, GreenMantra Recycling Technologies and BlueCat Networks.

The day's schedule also included panels and keynotes, which weren't always as well-received. A keynote by HP Software Enterprises VP Russ Daniels was delivered to a sparse audience, though that could have been because it was directly before lunch. Several of the panels were well-attended though and focused on the early-stage investment landscape for entrepreneurs in Canada.

Mark MacLeod, a partner at Montreal seed stage venture capital firm Real Ventures, moderated a panel tackling the Canadian seed and angel funding landscape. Panelists ranged from investors including Duncan Hill of Mantella Venture Partners to seasoned entrepreneurs, including Bruce Croxon who founded LavaLife (you have him to thank for all those annoying commercials).

The panelists talked about how the cost of starting a technology company has come way down in the past 10 years, which has led to increased competition. They also talked about the benefits of failure, something that seems to come up at every startup-focused conference on earth. "You will learn more from failure than you will from success. You'll enjoy success more though," said panelist Parminder Singh. And of course the question of Us vs. the Valley came up, with the panelists arguing there are so many reasons to look for investment at home (tax incentives, mentorship) instead of hoping for a seed investment from well-known Silicon Valley investors like Dave McClure.

Despite the abundance of suits, it was actually a good event with the right mix of investment-focused panels and entrepreneurship-focused demos. Keep an eye on the list of innovative companies who presented - you never know which one could become the next Facebook.