Does anyone in Toronto use QR codes?

When I was at the South by Southwest Interactive festival in March 2010 I noticed something different about the namebadges. They still had a person's name, photo, and Twitter name, but this time they also had a funny-looking bar code that kind of resembled a tech geek's Rorschach test. The code is called a QR code (which stands for Quick Response code), and in this case it allowed attendees to scan the code to immediately receive that person's contact information in their smartphone - no annoying business card exchange required.

QR code technology has been around since it was developed by a Toyota subsidiary in 1994. Since the explosion in popularity of mobile technology and social media the codes seem to be popping up everywhere, allowing companies to link to multimedia content on the web, or to content on mobile devices. Other mobile technologies including location-based app Foursquare have seen tech-savvy early adopters jump on board but have failed to hit mass adoption. But companies large and small, many of them in Toronto, are betting that QR codes are the next great marketing tactic.

QR codes are popping up everywhere - from a Kylie Minogue music video (the code linked to the word "love"); to Christmas wrapping paper that links to holiday videos; and even wall paper made by Canadian company Rollout (just in case you think the codes need to be plastered all over your living room). 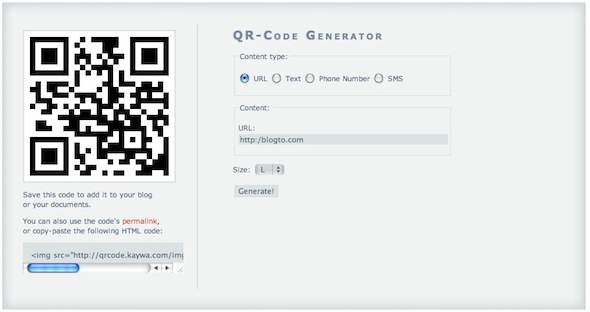 They're becoming so ubiquitous because you can generate them easily, put them anywhere, and link to anything you want. You can create a code yourself in about 30 seconds by going to one of many QR code generator sites and linking a code to a URL, text, or other multimedia content. You can then save the code and add it to your blog, your company's documents, or anywhere else you want. Maybe you include it on your company's brochure so people can link to your website, or take a cue from SXSW and make your next event a little bit more interactive.

For someone to read the code they have to have a QR code scanner application installed on their mobile phone, though there's no standard app across all platforms as of yet. Users simply open the application and snap a photo of the code, and the content is then delivered to your phone. And when I say simply I mean you have to hold your phone extremely still to capture the code correctly - something that wasn't exactly easy at a crowded SXSW party.

Some Toronto companies are leveraging the technology and introducing it to traditionally offline industries. ClikBrix is a QR code and mobile web solution for realtors and brokerages, and allows prospective buyers to scan codes on For Sale signs to get more information about the listing. For a monthly fee agents and brokers create property listing mobile webpages, which are then associated with a QR code.

"We built Clikbrix to help real estate agents easily take advantage of the explosion of mobile users, as well as both energize and reduce volume of printed materials by making them interactive," says Ted Geatros, a partner at the company. "Clikbrix enables real estate professionals to meaningfully stand out in this extremely cluttered marketing space."

And it's not just small companies who are using them. RBC recently introduced the technology as part of its sponsorship of the Tim Burton exhibition at the TIFF Bell Lightbox. The company sponsored the audio guide, which is available by scanning one of the QR codes located in the exhibition. 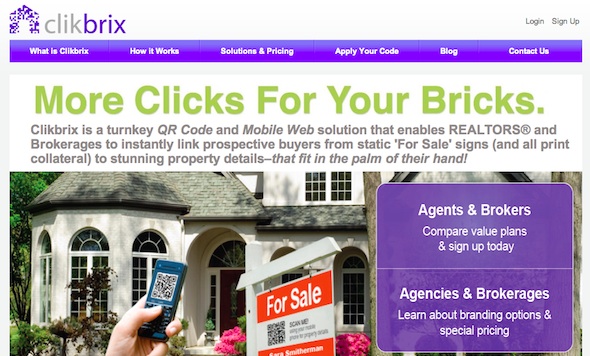 But I'm going to venture a guess and say that the average person strolling past a For Sale sign doesn't have a QR code reader enabled on their phone, and neither does the average die-hard Tim Burton fan, which limits their effectiveness. Companies might be using them to up their cool factor - using QR codes now is kind of like having a Twitter account in 2007, it means you're ahead of the curve - but I'd love to know if they're seeing any success.

Local digital agency Delvinia recently surveyed Canadians on their knowledge about QR codes. The company has been using them in their client projects since 2008, but laments the fact that the North American market isn't anywhere close to the adoption rates in Japan and Europe.

In the survey they found that many people didn't know what the heck they were - some even guessed they were a crossword puzzle or a "complicated maze." Once the concept was explained though many said they were interested in using them.

This is my problem with the codes as a consumer. Scanning one at SXSW was really the first time I really took the time to scan a code and actually use the data it linked to. In that case it saved me the hassle of transcribing someone's card into my contacts, which was worth downloading the app to scan it and actually taking the time to capture it. But why would I ever stop in front of an advertisement, scan the code, and link to another advertisement?

Unless there's a value proposition for the consumer, like a discount, I think advertisers might be wasting their time. At the end of the day it's all about the average Joe using the technology in their day-to-day routine - and I just don't think it's there yet (ask your parents if they've heard of them. I bet the answer is a resounding no). Have you scanned a QR code before? Will you now?