TEDxToronto offers a "Call to Action"

It's hard to get notable people like Al Gore, Jane Goodall and Tony Robbins behind one cause - let alone on one stage. But If you're familiar with TEDy ou know that it's a regular occurrence. TED (which stands for Technology, Entertainment, Design) started in 1984 as a conference with a big idea: to cultivate "Ideas Worth Spreading," now their tagline.

TED has now expanded to include two exclusive annual conferences - you have to apply to get in, and even then you pay thousands to attend; and the uber-popular TED Talks, 20-minute videos from some of the world's most inspiring thinkers - one of my favourites is Ken Robinson's talk on why schools kill creativity.

The organization also recently expanded to include TEDx events - independently-organized events in cities around the world. The first TEDxToronto event was held last September, and yesterday some of the city's brightest thinkers gathered for the second.

The one-day event, held at Glenn Gould Studio inside the CBC building on Front St., was organized by a group of local volunteers, including Paul Crowe and Dan Jacob. The event centred around a series of 20-minute TED-like talks and performances combined with official TEDTalks videos. As with the official TED conferences, the goal was to spark dialogue about social issues and provide "A Call to Action" - the day's theme.

The lineup of speakers was eclectic to say the least. First up was Boonaa Mohammed, a poet who kicked things off with a bang talking about racial and religious issues (as he put it "we'll begin to explain why fundamentalism still begins with fun"). Then there were entrepreneurs like Bruce Poon Tip from GAP Adventures, who talked about eco-tourism and sustainability. He made me think twice about where I travel when he said that only five of every 100 tourist dollars spent in developing nations stays there. Dr. Catherine Zahn, president and CEO of Toronto's Centre for Addiction and Mental Health (CAHM) talked about addiction, and told the crowd that one out of five of us would have a brush with mental health issues or addiction in our lifetimes. One of her main points is that there's not a "bubble of saneness" that "normal" people live - it's permeable. The crowd was abuzz when host Sarah Taylor of MuchMusic introduced Dr. Zahn as doing some "crazy things." 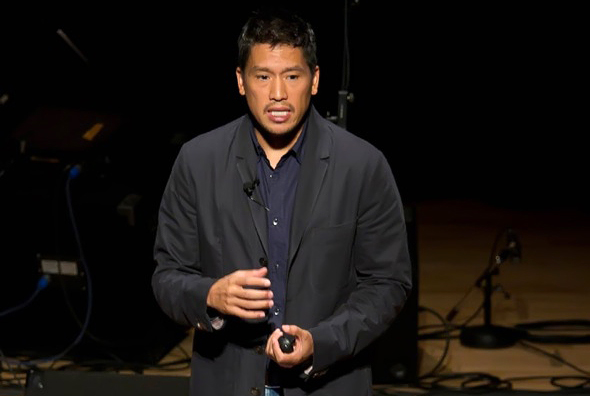 My favourite speaker of the day was Drew Dudley, founder of Nuance Leadership. He spoke about the concept of leadership, and why we've made it into something beyond us - it's now about changing the world, and it's overwhelming for the average person. He spoke about what he calls "Lollipop moments" - when your simple action changes someone's life without you even knowing it. "We need to redefine leadership in terms of lollipop moments," he said, and his call to action was clear. "My call to action is that we need to get over the fear of how extraordinarily powerful we can be in other people's lives."

Other speakers included Neil Hetherington from Habitat for Humanity Toronto; Sol Guy, the creative mind behind K'Naan's latest successes; and Neil Pasricha, author of The Book of Awesome. There were teaser videos made for each speaker on the TEDxTO YouTube channel, and they'll be posting full speaker videos later this year. And of course there were TEDTalks shown throughout the day - I especially liked Graham Hill's talk about why he's a weekday vegetarian, or "Weekday Veg" as he liked to call it. His idea is simple: nothing with a face from Monday-Friday, and then meat on the weekends. Simple idea, but I'll still stick with my bacon thanks.

The audience at the event was equally as eclectic. Attendees had to apply to attend the free event, and were hand-picked by the organizers. From my spot in the crowd I recognized several of the city's digital media crowd peppered in with non-profits and entrepreneurs. For those not able to attend the live event (there were only about 150 spots available due to space issues) it was live-streamed online, and satellite events were held at the Centre for Social Innovation, MaRS, and schools across the country.

The day was full of big ideas and inspiring people. Not much caffeine though (I couldn't take my coffee into the theatre and there was about a half-hour lineup for a free cup). Whether any of those ideas make it further than the walls of the Glenn Gould studio is another issue, but there were 1,200 people at the after-party at 99 Sudbury who were likely reflecting on the day's events. Until we gather next year to discuss the biggest and best local ideas, I'll be watching TEDTalks to keep me motivated - but just be careful, they're addictive.

And in an effort to be transparent, I should note that I helped tweet the event and was a volunteer with TEDxToronto last year.