When Microsoft launched Bing in June last year, I took zero interest in the new search platform. I suppose there's various reasons for this, but chief among them, no doubt, is the fact that I've been thoroughly indoctrinated by Google, whose various services always seem to work more intuitively than similar products on offer from their competitors. I'm far from alone in holding this opinion. Recent statistics indicate that Google absolute destroys other search engines with 83.34% of web query volume compared to Yahoo at 6.32%, Baidu at 4.96% and Bing at 3.25% (via Net Applications). 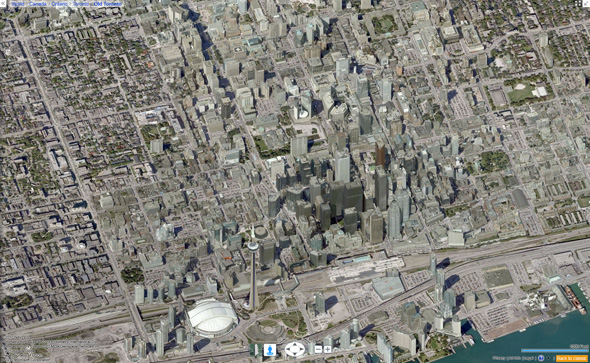 So this isn't news. Everyone knows that Google rules search-based services. And yet I was surprised to learn recently that there's at least one thing that Bing does better than Google (at least for now), and that's aerial maps. Although Google is slowly rolling out 45째 aerial imagery in select cities, Bing has offered this feature since its inception (Bird's Eye arrived in Toronto via Live Maps in May 2008).

Called Bird's Eye, the imagery is compiled from photos taken from low flying planes. And once you use it, the standard from-the-top view currently offered by Google in most cities seems virtually useless. Because the oblique angle from which the imagery is captured allows the user to see both the side and the top of the landscape or structure in question, it's so much easier to explore a city and its various landmarks. Add to that the remarkably high resolution, and you have a multiple hour time-suck on your hands. 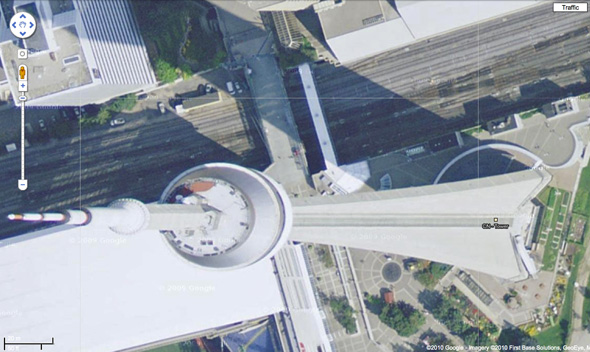 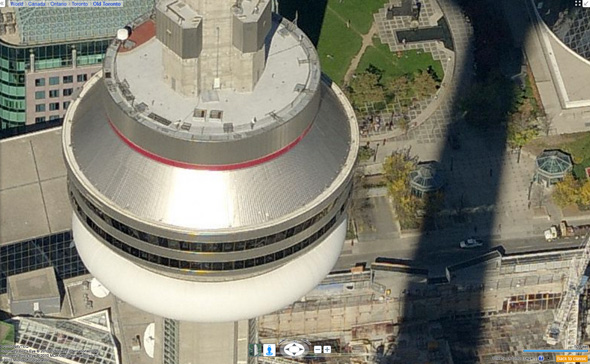 Note the superiority of the Bing imagery below.)Now, as I mentioned, Google does have similar technology in place for around 30 cities worldwide (none in Canada yet), and you can bet that they're working hard to increase that number. But while Google's version allows one to zoom out a little further without the map looking a bit like a cartoon (which happens when Bing "enhances" certain buildings), there's another cool feature on Bird's Eye that might (and I do mean might) keep it ahead of the curve for a little while longer. The technology allows users to do a 360째 loop around whatever they're looking at. Even without the special 3-D plugin to make this process seamless, a few clicks on the curved directional arrows makes it possible to circle around a point of interest. 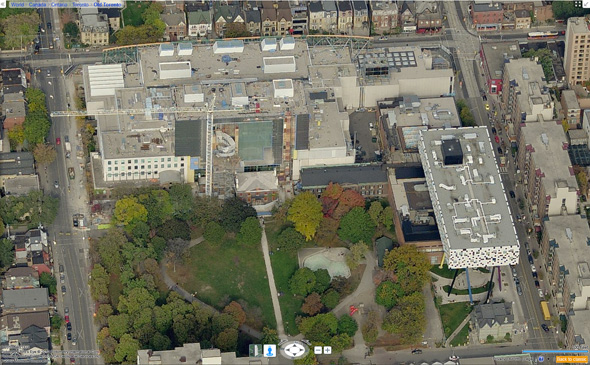 So, despite the fact that they're a pain in the ass to embed, often slow in tracking across new terrain and Toronto lacks the Streetside feature (which is the Bing version of Google's Streetview), I have to admit that from the standpoint of general entertainment, I'm pretty impressed with these maps. But who knows, maybe this little discovery I'm sharing is all just old news? Bing has been around for over a year, after all. But, based on the user stats cited above, I get the sense this is still worth sharing.

If you're looking for a few minutes to kill, you could do a lot worse that exploring Toronto via these maps.

To use the Bird's Eye feature in the map below, simply select that option from the top menu and explore away.

Scott Pilgrim vs. The World video game is stacked with hilarious Toronto references