Is a wireless price war coming to Toronto?

It seems like ever since the wireless license auction in 2008 new carriers have been popping up left, right and centre. First it was WIND Mobile in December, backed by powerhouse entrepreneur Anthony Lacavera. Then it was Public Mobile, with their cheeky commercials highlighting everyday Joes and their wireless needs. Recently we saw DAVE Wireless launch their consumer brand name Mobilicity, backed by John Bitove.

So many companies, so many unlimited plans - in fact these simple unlimited talk-and-text plans are the cornerstone of their offerings, all roughly targeting the same demographic: the working class talk-and-texters who don't need add-ons like data. They're also targeting the people frustrated by the contracts and arbitrary charges involved with the Big Three - they don't require contracts and promise no hidden fees.

At first it seemed like consumers were jumping on the 'wireless warriors' bandwagon - people were happy to finally break free from the incumbents and support the little guy in this David vs. Goliath battle. Then we started to hear grumblings about the coverage areas. And people complained that even the lowest priced packages weren't comparable to similar plans in the United States. And then the media began to question how successful these companies actually were at attracting customers, and how viable they would be down the line (WIND just took on a $700 million loan to expand its service nationwide).

So it was like the icing on a bittersweet cake when Rogers announced on June 30 that they would be launching a new unlimited talk and text brand called Chatr, apparently in a move to compete with brands like WIND Mobile. They already operate so-called discount brand Fido but Chatr will offer unlimited talk-and-text plans. 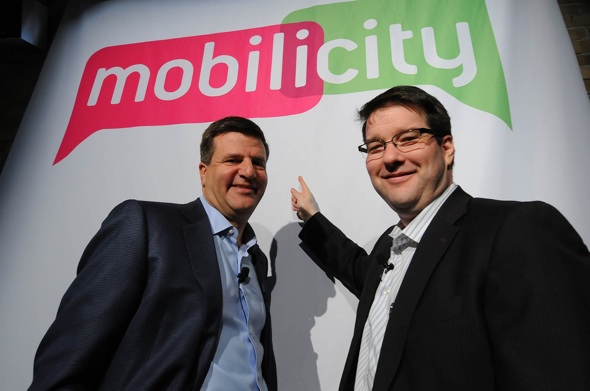 The news wasn't received well by companies like Mobilicity - in fact Chairman John Bitove brought reporters to his office on July 9, calling Chatr an "abuse of power" and threatening to launch legal action against Rogers.

I spoke with Bitove on Monday and he didn't tiptoe around his feelings for Rogers. "Introducing 'fighting' brands to eliminate the competition is in direct breach of Section 78 of the Competition Act," he said. "And the intent of the Chatr brand seems clear, considering the timing of its launch, the markets Rogers has chosen (and not chosen) and the hit it's willing to take on its revenues. There is absolutely no question in my mind that it's leveraging the other parts of its business to try and destroy the competition."

Rogers has said the Chatr brand will be urban-focused, which is where the discount brands primarily operate. "If Rogers likes our plans and pricing so much then why doesn't it offer unlimited pricing in all markets, not just where it competes with us?" Bitove asked. "The answer is simple, it can't compete with our cost base and will need to subsidize the Chatr brand from its other businesses to compete with us."

This isn't the first time Rogers has played in the unlimited plans space. When they acquired Fido in 2004 the brand had unlimited plans, but they were removed from their offerings, leading Bitove to question their motives. "It's clear that what Rogers did with Canada's first unlimited talk offering, City Fido, which it bought and closed down, that it doesn't want Canadians to have simple unlimited affordable rate plans," he says. "It wants to try to kill us and then play the same old game with Canadian consumers."

So what are the major players saying about Chatr, and about their plans to compete with the low-cost carriers? Last week I stopped by TELUS' back-to-school preview, where they spent more time talking about their new partnership with the CFL and upcoming device launches than about the wireless wars.

I spoke to Anne-Julie Gratton, Senior Communications Manager, about their reaction to the new entrants in the wireless scene. "It's not just a question of the price, but nobody has the same needs for their phones," she says. She says they're focusing on the diverse needs of their customers, and didn't indicate any new launches - they already operate lower-priced Koodo.

One of the other big guys, BELL, already has two discount brands - Solo Mobile and Virgin Mobile Canada. So far they've been mum about whether they'll drop prices at their existing brands or launch a new one to compete.

The company at the heart of this media firestorm, Rogers, declined to respond to the questions I sent them about Bitove's comments, and sent a canned statement about Chatr's impending launch. They have commented on the issue before though - John Boynton, Rogers' executive vice-president and chief of marketing, told The Globe and Mail that Mobilicity "seems to be all about this company and not about customers," adding that all this competition should be good for the consumer.

I asked Public Mobile and WIND Mobile to comment on this story but they didn't respond by my publication deadline.

The bottom line is what's best for us - the consumers. While we may have our grievances against the new entrants, we can also rattle off a list of complaints about the Big Three - bad customer service, hidden fees, inflated rates...the list goes on. Add to that a recent report by Bank of America Merrill Lynch stating that Canadian wireless companies have the highest profit levels (46.7% in the first quarter) among 21 developed nations and it's easy to see that talk, text and data prices could still go a lot lower and the carriers could still be plenty profitable.

The new entrants can kick and scream all they want, but it seems inevitable that the Big Three will launch competitors or drop the prices of their discount brands, and sooner than later. And that's a good thing. Companies like WIND, Public Mobile and Mobilicity were supposed to finally bring decent mobile phone service to Canada but with limited handsets and pricing that's still steep compared to other countries they deserve the competition they're about to get.