Usually the decisions made at big tech conferences in Silicon Valley don't affect our small, local businesses. But that's not the case with Chirp, the recent Twitter app developers conference held in San Francisco on April 14th and 15th.

They, along with the rest of the audience, were surprised by some of the decisions announced -- namely Twitter's purchase of popular iPhone application Tweetie.

I talked to Bretton about Chirp, the difficulty of developing on someone else's API, and what the news means for his app (hint: you'll still be able to filter out tweets about Justin Bieber).

Tell us a bit about why you decided to build TweetAgora.

We came up with the idea behind TweetAgora last Summer over patio beers. We were talking about the incredible potential of Twitter, while lamenting the signal-to-noise problem that comes with following lots of people. It's a problem that comes up with any social network: it's fun at first when things are relatively quiet, but as your network grows it starts to get unmanageable. Unfollowing people causes hurt feelings, some topics (like television shows & conferences) will just never be of interest to some people, and it's hard to find "the good stuff" through all the crap.

We realized that this was a problem that needed solving, and we had the skills to solve it...so once our schedules opened up, we decided to build our dream Twitter client! It's first coming out for the iPhone, then iPad, and finally on the Mac Desktop.

What differentiates TweetAgora from other Twitter clients out there?

There are no shortage of Twitter clients out there, but for the most part none of them have brought anything new to the table. With TweetAgora, we've got a very clear differentiator in the form of filters. We're tackling the noise problem by creating a nice easy way to filter out tweets by keyword (no more Justin Bieber!), to mute people (so you can still get messages & mentions from them but without the rest of their tweets), to turn off conversations when things are getting too chatty, and to get rid of annoying Foursquare/Gowalla/Formspring updates. To improve the signa side of thingsl, we're providing the ability to view all of the links/pictures/retweets in your stream, and introducing "Agoras," which are basically super-lists made up of any number of lists, keywords, or people you want. We're doing a lot of other neat stuff, but those are the big features that differentiate us from everyone else 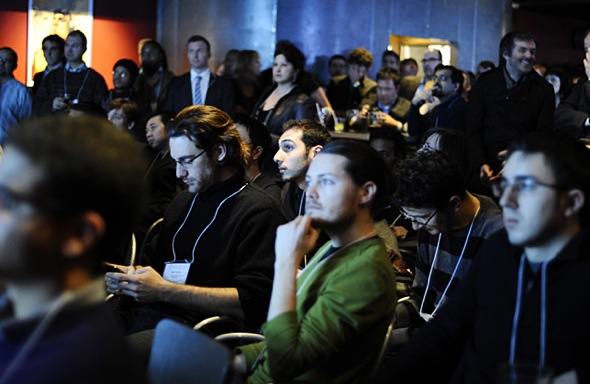 How did you react to the news that Twitter acquired Tweetie?

The gut-reaction was definitely an f-bomb or two (or 28), but once those were out of the way we realized that it actually benefits us. Twitter needed an official app to reduce the friction of joining the service, especially considering that something like 70% of accounts are "inactive." By providing a clear on-ramp to use Twitter on mobile devices (Tweetie for the iPhone and the Twitter client they built for Blackberry), more people will end up using Twitter the way it was intended: on the go. Anyone who's going to buy TweetAgora has already bought Tweetie anyway (at least once), so our target market of "power users" hasn't really been affected. It benefits us because the more people Twitter gets to actively use the service, the more people will potentially "graduate" to a more advanced client like TweetAgora.

What do you say to people who argue that it's risky to build your app around another company's technology?

There are certainly pros and cons to standing on the shoulders of giants (in this case, both Apple and Twitter). Building on an existing platform means you have a built-in user base, and in our case it wouldn't make sense to build a filtering application for a brand-new (and empty) service. Obviously there are risks; when one of those giants rolls over we have to be ready to shift our weight accordingly. Luckily we're a two-man team, so in terms of agility we're better positioned than a large company might be. Overall, we believe that the pros outweigh the cons. We'd rather solve existing problems on the platforms people are using than try to create our own.

How have your plans for TweetAgora changed since Twitter's announcements at Chirp?

The main thing that's changed since Chirp is that our motivation to get TweetAgora out the door has been turbo-charged. Our worry was that Twitter would announce API-level filtering (thus standardizing our differentiator), but after listening to the presentations & talking to some of the Twitter people, it doesn't look like that'll happen any time soon (if at all). Chirp was an absolutely phenomenal conference, and if anything it just reinforced our decision to build on the Twitter platform.

What were the reactions of the "union of third-party Twitter apps" you talked to at Chirp, and how did they vary?

There was definitely some trepidation before the conference started, but after all of the announcements and discussion, the vibe was much more relaxed. Most of the app developers we talked to recognized that there's more than enough of the Twitter pie to go around, and that the key going forward is to provide a clear value-added differentiator. In addition, Twitter's announcement of "Promoted Tweets" (and their plan to split revenue 50/50 with apps that chose to use them) seemed be well-received. Maybe all the really bitter developers decided to stay home?

How was Chirp beneficial to you as a developer?

Seeing Twitter's roadmap was important for future development, but the biggest benefit came from the social side of the conference. On day one we had a front-page interview on Mashable.com, demoed to Robert Scoble (who said he'd use it for Agoras alone), and had lots of great conversations with other developers. On day two we met (and later partied with) a bunch of the Twitter executive and staff, and got selected to demo in front of all 1000+ conference attendees (including a panel consisting of Google's Marissa Mayer, Twitter's Jay Goldman, VC superstar Paul Graham, and Blippy's Phil Kaplan). So from a developer standpoint, it was pretty good...but from the standpoint of a small startup looking to get noticed, it was phenomenal!

What's the timeline for TweetAgora's release?

Our goal is to have it in the app store by May 14th (which is the deadline to submit for an Apple Design Award). So we're aiming to have it submitted to Apple in the next 7-10 days, and then pray to the App Store gods for a speedy approval (ie: sacrifice a Blackberry on the Apple-altar)

How can the Toronto tech community help out?

The best way to help us out is by using it once we're on the app store! We'll be offering a slightly pared-down version of the app for free (only showing 50 tweets, no multi-account function, and no Foursquare/Gowalla/Formspring filtering), and the full version will cost $4.99. So everyone will have a chance to play with it a little bit before deciding to drop the "whopping" five dollars for the full version (no limit on tweets, multiple-accounts, and being able to filter out Formsquare, Gowalla, and Formspring tweets). Also, if you see someone in your feed complaining about too many TV or conference-related tweets, be sure to point them to TweetAgora!