Toronto Museum Project has the right idea, but remains a work in progress

Have you ever wondered why the city of Toronto has no museum of its own? Ever been traveling and visited a place like the Museum of the City of New York or the Museum of the City of San Francisco and thought -- why doesn't Toronto have one of these? As a history nerd and avid museum-goer, I believe such places go a long way toward establishing and maintaining the cultural identity of cities. And that's why I was excited by the plans to open the Toronto Museum Project opening in the Canada Malting silos.

Don't get me wrong. Toronto has its fair share of great museums. There are no less than 10 historic museums run by the city, including Spadina House, Todmorden Mills, Colborne Lodge, and the Historic Zion Schoolhouse (anyone remember taking a class trip there and being made to wear a costume and use slates and chalk?)

Then there are places like the Bata Shoe Museum and the ROM that have fantastic exhibits from around the world but mostly ignore the city in which they're located.

Toronto's smaller museums do a great job of showcasing what it was like to live here in the 19th century, and they educate tourists, schoolchildren, and other museum-goers about certain families, communities or spaces. But how great would it be to have our own place that considers the entire history of the city and its people?

Of course, I'm not the only one who wishes that Toronto would build its own museum, and in the last decade the City has been working on plans for just such a place. The Toronto Museum Project has been in the works since about 2002 when it was decided that the Canada Malting silos at the foot of Bathurst Street would be the future home of a place to share and display our history.

When things stalled due to a lack of City funding, however, Director Karen Carter made things happen anyway. In a recent interview with the Star, she said "I like to think of ways to manifest our dreams when we can't have the perfect dream." So she secured a $300,000 federal grant from the Department of Canadian Heritage, and the project went digital. The website launches today with an event at Fort York.

I've checked out the new site, and I have to say that while it contains some interesting artifacts and stories, I'm not in love with it. The current exhibit, "100 Artifacts, 100 Torontonians, 100 stories, 100 exhibit ideas," is touted as "an entree into exploring Toronto's history," but I can't help but want more.

When you look under the "Stories" tab, you'll find 100 small boxes that you can click on to view various exhibits. While such a comprehensive lay out could be nice, it's hard to see what exactly each item is. If you want to click randomly at tiny boxes, that can be sort of fun, but if you're interested in say, women's history, or the history of immigration, or military history, it's hard to know where to go to find an artifact or story that will interest you.

By clicking on an image, you're taken to a page that displays a photo, an "overview" of the artifact, a "curatorial comment" and an interview with a Torontonian who tells a related story about the artifacts. 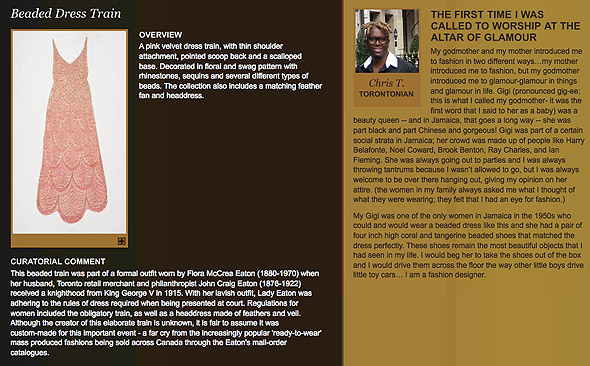 My criticism of this technique of blending images with curatorial comment and stories from Torontonians is that some of the connections between the objects and the stories seem a bit forced. For instance, the pink velvet sequined dress belonging to Flora McCrea Eaton at the knighting of her husband in 1915 is a beautiful artifact, and the website allows you to zoom in very close to see it in detail.

The image is paired with a great story by Chris T. about what he calls "the first time I was called to worship at the Altar of Glamour," when his mother and godmother introduced him to fashion as a child in Jamaica. Both are interesting bits of Toronto's history -- I'm just not sure that putting them next to one another does justice to either story. I just want to know more about both! 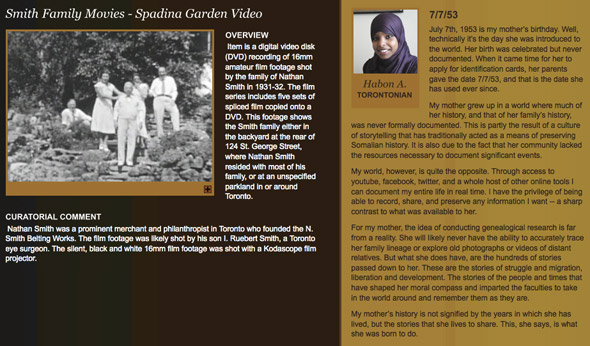 Another weak pairing is made between the Smith Family Movies in the Spadina Gardens and an interview with Harbon A. Just a brief thirteen seconds of footage shows the Smith family in the early 1930s posing in the gardens, while Harbon provides a thoughtful discussion of her mother's family history and "the stories that she lives to share." I don't really see the links between the two, but beyond that, while the footage is sort of interesting if only for the clothing, it doesn't compare to Harbon's introspective story.

But there some are some pairings that do share a symbiotic relationship. "Lighting the Fire," for instance, is a concert program from Mahalia Jackson at Massey Hall in 1953 paired with stories by Bertha S. who talks about the concert and the impact that it had on her own musical career. This is precisely the type of pairing that I'd like to see more of. 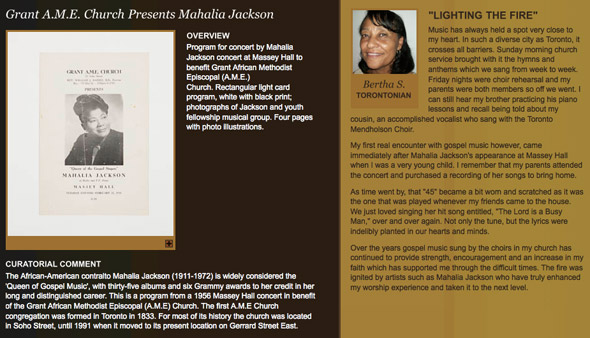 So while I think the Toronto Museum Project is to be commended for colouring outside the lines when it comes to traditional museum exhibits, a number of the entries left me either confused as to the connections between the artifact and stories, or wanting to know more about both. The artifacts and stories get short shrift here, but maybe more will be added in the future.

And in an era when small museums are struggling to remain open, attract enough visitors and display their massive collections in small spaces, maybe online projects are the way of the future.

That said, when it comes to artifacts, I'd rather see the thing itself in a museum. There is something about the experience of paying your money, getting a sticker for your sweater, and walking around in the quiet, darkened space looking at objects from the past, even if they are behind glass. So I hope that the City does move forward with an actual museum in the Silos or another location.

But in the meantime, despite its shortcomings, I'll be spending more time clicking on the tiny squares at Toronto Museum Project.