When dairy cows start tweeting is it safe to say that Twitter is slowly taking over the world? OK maybe not, but a group of 12 dairy cows in Brant County, Ontario, have recently started "teat tweeting" and even have their own website.

It's all thanks to a collaboration between Marcel O'Gorman (head of the University of Waterloo's Critical Media Lab) and Ron Broglio (an English professor from Georgia Gwinnett College in the States). This new social media project, affectionately named the Teat Tweet Dairy Diary, aims to show consumers the often highly technological nature of farming and how the industry is changing.

I for one don't imagine robotic milking machines (effectively creating a self-serve milking bar for the cows) when I think of Ontario's dairy farms, but Voluntary Milking System (VMS) technology is becoming more and more popular among farmers in Ontario and beyond.

Farmer Chris Vandenberg of Buttermine Farms (who's cows are doing all the tweeting) told me that he isn't the only one using this new robotic milking technology, there are about 25 farms using VMS in southwestern Ontario alone. It's even more widely used in Europe, where the technology originated.

The system works by linking the cows to robotic milking pens through an electronic RFID collar. The collar tells sensors at each milking pen when the cow last gave milk, how much she gave, and how long it took. If there hasn't been enough time since the last milking, the robot won't let her into the pen.

The inspiration for the project came to O'Gorman and Broglio through talking to Chris and other farmers using VMS technology. They came to realize how drastically it's changing dairy farming.

With cows able to milk themselves any time they like, farmers using a VMS system act more like information managers than they do farmers. Dairy Diary was conceived as a way to both allow the farmer to regain intimacy with his cows, and allow people to learn more about where their milk comes from. 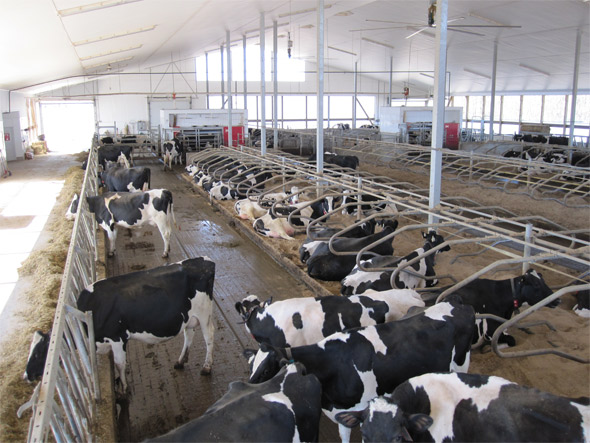 So how do the cows tweet? Marcel O'Gorman and the crew at the University of Waterloo's Critical Media Lab didn't want to share all their secrets, but they did tell me that data individual to each cow is pulled from the robotic milking system and that tweets are generated for specific cows based on their interactions with the robots. The messages are drawn at random from a database, sort of like a chatbot.

For example, the sassy bovine Attention Please (@AttnPlease) might tweet something like "I just squirted 11.8 kgs of milk out of my teats in 5:11 seconds. What did you do today?"

Other things the cows share in their tweets? How often they get shot down by the robots (SNAP!), how much they ate while in the milking pen, which of their teats is the slowest, and how good the automated cow brusher feels.

I have been following Attention Please for a couple of months now, and the tweets are often quite funny. The project recently landed itself on The Huffington Post's "9 CRAZIEST things that can Tweet" list.

Dairy Diary was launched back in December and will be running for a year. You can check out pictures and bios of each cow on the Teat Tweet website, and follow them on Twitter (but they all tweet pretty much the same things, so you really only need to follow one): @AttnPlease, @ChargeCindy, @ChargeGina, @ChargeMabel, @ContrastAmanda, @FreerideSpeedy, @FrostyLace, @GoldwynWindy, @Jerry_J_Lo, @KurtAppeal, @MontgomeryMae, @MortyFy