A 2.0 version of the coupon book

Have you ever stopped yourself from trying something different in the city because you were worried that it might not be a good bang for your buck? Well, thanks to the traction the concept of collective buying on the web is getting, you have one less reason to worry about your bottom line and one more to get out and enjoy yourself.

Although it's been around for about a year and a half, TeamBuy.ca seems to be coming up on more people's radar of late. Founded in Toronto by Edward Yao and Andrew Hutchings, TeamBuy combines the power of buying in bulk with the community dynamics of web 2.0.

Upon graduation from Queen's and U of T respectively, Yao and Hutchings found that trying to experience all that Toronto has to offer was not the most affordable of propositions.

"It was a struggle for us, and we figured that tons of other people were feeling the same way. We wanted to find a solution" explains Yao. "The premise behind the site is that businesses will offer huge incentives because our users are essentially buying in bulk. Hence, the company's somewhat predictable slogan, 'If we buy together, we save together." 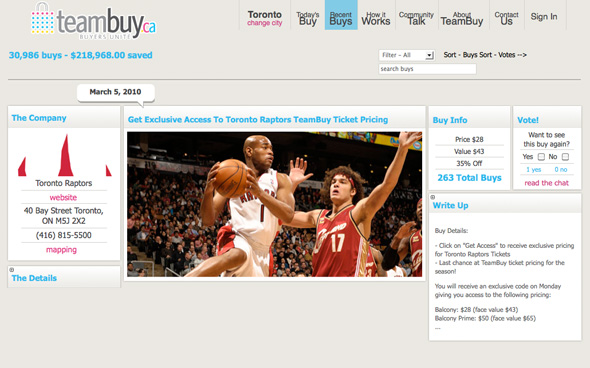 Basically, TeamBuy offers a different deal every 24 hours from various businesses in Toronto that must be purchased directly from the TeamBuy website on the day the deal is offered. It seems the deal can be for pretty much anything: restaurants, spas, salons, even things like go-karting and golf lessons.

Raptors Tickets and savings at Smoke's Poutinerie are two popular examples, but you can find more samples of recent deals here. With each deal averaging at about a 50% discount, it's pretty alluring.

However, here is a slight caveat: each offer has its own set of details, which include expiry and restrictions. I pay close attention to these so that I know what I'm buying in to, and you should too.

For every deal there is also a set minimum number of buys that the businesses require to offer the incentive. Once that minimum is reached everyone gets the deal. If it's not reached, it doesn't go through and thus nobody is charged. Most of the time the deals go through, but it is dependent on the offer and relative interest from users. So the idea is that if you like a deal, you'll want to share it with friends, which will increase the chances of it going through and your avoidance of disappointment.

There was, however, no disappointment to be had when I bought the Chippy's fish and chip deal that recently went through. I received the voucher in my inbox the next day, but I didn't redeem for a month later because I got a little busy with work (remember to check on expiry dates).

When I finally decided to redeem, these were the steps I took: I found the voucher in my inbox, printed it, and headed over to Chippy's, where the cashier took it without any hiccups. It's that simple, which is important. Having to jumping through hoops to get a deal often defeats the purpose, doesn't it?

In no time I was given two haddock fish and chips, two tartar sauces, and two drinks. The original price was $26, but we got it all for $14 -- not bad at all! I'm sure the 174 others who purchased this deal would feel the same. 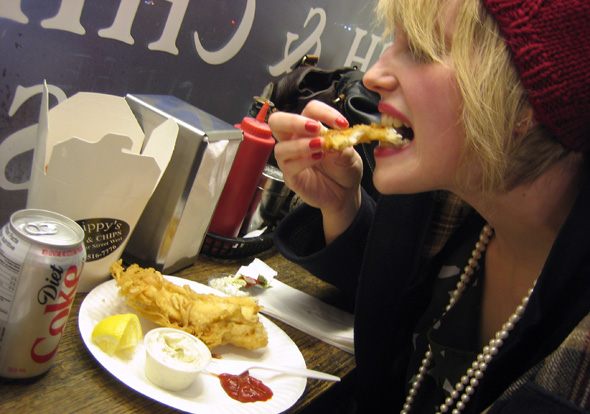 Keep in mind I'm not British, but I really liked the fish and the chips. And despite what past reviews say, they do have ketchup and malt vinegar available at your fingertips. All in all, the experience was a a good one.

Would I have tried Chippy's without TeamBuy? Maybe. Did the TeamBuy light a little fire under me to try it? Yes. Was a 50% discount on my trial worth it? Absolutely. TeamBuy-ing is a great way to try Toronto without spending a ton of money, and I'm looking forward to what else they have to offer.