More E-Book Readers Available in Toronto, but the Best Ones are MIA

Sony introduced the latest models in their line of Readers this week at the ROM, as part of the company's push to maintain their status as a major player in what's still a tiny but potentially massive part of the consumer electronics market. Sony Canada's showcase of their refreshed e-reader line came a day after a similar Sony event in New York, and gearheads who follow tech news couldn't help but note that the big news at the Toronto event wasn't what Sony was showing off, but what was missing.

The ROM event focused on two new Sony Readers - the PRS-600 Touch Edition, and the PRS-300 Pocket Edition, both of which replace earlier models, and which will be available for sale at a wider range of retailers, like Best Buy. (Earlier Sony Readers could generally be had only from the company's website or its Sony stores.)

Puneet Jain, director of marketing for Sony's e-book division, also announced Mac compatibility for the Reader, a two dollar drop in the Canadian price of the e-book version of New York Times bestsellers on their e-book store, and a few new content partnerships, introducing Jane Pyper, City Librarian for the Toronto Public Library, to detail the Reader's compatibility with their e-book lending program, and a rep from publishing house Harper Collins to talk up their e-book catalogue. Additionally, Sony announced that they were (finally) moving away from proprietary formats to the ePub standard, which looks like it might end up doing for books what the mp3 did for music.

What was missing was the Daily Edition, also known as the PRS-2121, which made its debut at Sony's event at the New York Public Library the previous day, and caused waves of online buzz across the tech blogs. Built to compete with Amazon's Kindle DX, the Daily has 3G wireless (courtesy AT&T) to enable computer-free access Sony's bookstore. Like the DX, it's big (with a 7" touchscreen) and expensive ($399 in the US,) and meant for digitally-inclined commuters and tech freaks intent on going paper-free with a vengeance, right down to their magazines and morning paper.

The Daily Edition will be unavailable in Canada for the foreseeable future; in fact, it's entirely likely that, by the time the company can forge partnerships with service and content providers to make the thing viable here, Sony will have moved on to an entirely new model. According to Puneet Jain, Sony Canada is more concerned around building a market for basic e-readers before they start competing in what, even in the US, is still a specialized niche. 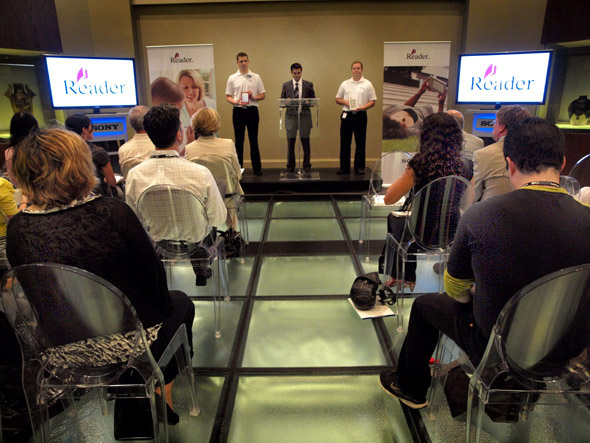 On the same day that Sony held their ROM event, a similar launch was happening in Montreal, pushing the French versions of the Pocket and Touch editions, and partnerships with French book retailers. The company is obviously intent on capturing the high ground of the e-book battleground here, which will be far easier as long as the Kindle remains available only on Amazon's US website, and competing devices (Hanlin's EZ Reader, Bookeen's Cybook Opus, Samsung's Papyrus) are, as far as Canada is concerned, mere internet rumours.

It's an article of faith, even among publishing industry die-hards, that print will eventually cross the same digital Rubicon that music and video did years ago. The wonder is that it hasn't done so sooner, as most document files are generally smaller than the average mp3, and a tiny fraction of even the most compressed video, though the impediments to print's migration from paper to bits are clearly more cultural and logistical than technological.)

The presence of Pyper and the Harper Collins rep at the ROM event was meant to underline the acceptance of e-books by the publishing industry, and signal their eagerness to be active in the creation of a digital book market and not (one hopes) litigious and truculent enemies, like the TV and movie business and - especially and disastrously - the record industry. Which is nice, but it's probably daily news consumers that'll end up making e-readers as ubiquitous as personal music or gaming devices, and since that market is being developed in the US first, Canadians will end up as spectators until a critical mass of demand surges over the border and overcomes the logistical barriers, at least.

Whatever happens, Toronto will probably be at the heart of it, as the country's densest population centre, and therefore the place where we'll start seeing e-books in public. (I have personally only spotted a Reader in use twice, both times in the hands of what I'd have to describe as a prosperous older gentleman apparently employed in the financial sector. Among the e-books many atypical characteristics is that it seems to be a technology adopted by older consumers first.) 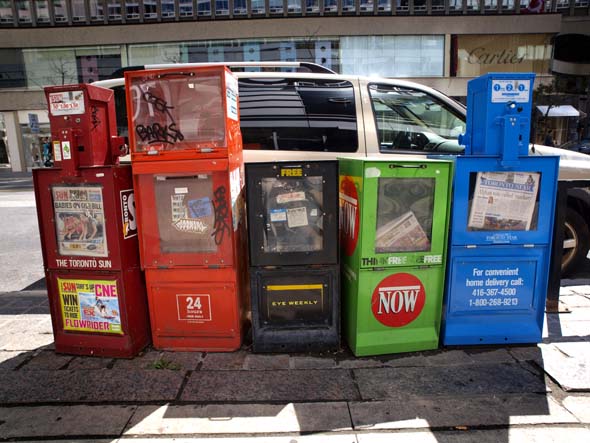 A Daily Edition-type device that could download newspapers and magazines through wifi would only succeed if a) cell service providers supported it or b) a public wifi network was in place - preferably both. I'm sure that Sony is feverishly trying to get the former in place, but the latter, either based around transit networks like GO's trains or the TTC's subways, or concentrated around broad range hot spots radiating out from the downtown, remains a pipe dream.

The anxiously unknowable X factor, of course, is the potential consumer, and since you're already happily shifting your reading habits online, that would probably be you, the blogTO reader. What I - and Sony, and Amazon, and everyone else with some sort of interest, financial or otherwise, in the digital reader - would like to know is if and when you'd make a gizmo like the Sony Reader part of your commuting baggage.