While I'm sure it was just a coincidence, there was still something ominous about the Bell truck briefly idling outside the Gladstone Hotel last night. Had they caught wind of our discussion? Had Bell sent their lackeys to quash our dissent, I chuckled quietly to myself, as I stared out the window?

Of course, there was nothing truly sinister about last night's Open Internet Town Hall, hosted by SaveOurNet.ca. Instead, the evening proved to be a successful one, full of drinks, discussion, and most importantly, a focus on net neutrality. Yet, at times, it seemed as if that focus was hard to reach.

Chances are, you're probably confused, or entirely unaware as to what net neutrality is - and you're not alone. As the name implies, net neutrality is about keeping the internet open, or neutral. This means that ISPs like Bell and Rogers should not have the power to dictate what services their customers can and cannot use. One example is the decision both ISP's have made in previous years to throttle, or limit, certain types of online traffic - particularly P2P file sharing services, or some forms of video streaming.

But even at last night's event, with a group whom I'd assume to be a fairly technological bunch, there was a fair amount of uncertainty surrounding the issue - sometimes from the guest speakers themselves.

Those chosen to speak on the evening's panel, and hopefully clear up any confusion, included Rocky Gaudrault, CEO of the popular alternative ISP Teksavvy, Mark Surman, Executive Director of the Mozilla Foundation, Derek Blackadder of CUPE, and local bloggers Raymi the Minx and Sass. There were also a number of special guests in the audience as well, with a brief appearance by the NDP's Olivia Chow.

To be fair, the panel offered a good variety of opinions and perspectives, both from within the industry, and outside it as well. Yet there were still times at which I questioned whether those opinions were really relevant to the topic at hand. Raymi and Sass, for example both admitted they only became aware of net neutrality in the week before the debate, a fact that was fairly obvious throughout the course of the evening.

Rocky Gaudrault, as the CEO of Teksavvy, probably prompted some of the most interesting discussions of the evening. For the uninitiated, his ISP has been lauded as a strong supporter of net neutrality, and staunchly opposed Bell's throttling and traffic shaping practices. Teksavvy, which shares Bell's DSL lines, has been directly affected by these practices.

Gaudrault made a great case against Bell and Rogers' traffic shaping practices, noting that, if the two company's lines must be throttled to fend of P2P-caused congestion, why do they continue to offer increased speeds to customers? 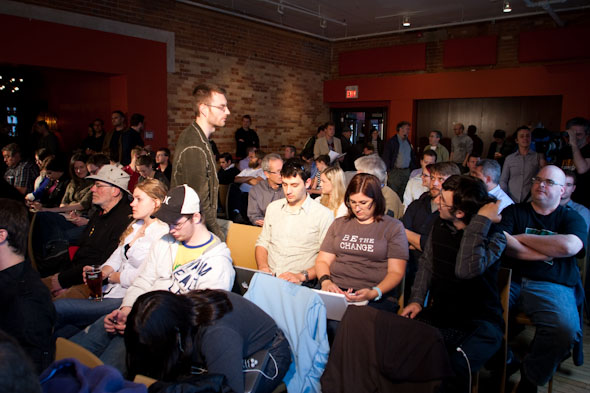 More so, he reiterated his strongly held opinion that ISPs should be acting merely as gateways, and not responsible for policing content. Opponents of net neutrality often point to traffic shaping or filtering measures as an ideal way to prevent piracy and other illegal materials from being traded across the net.

While both Gaudrault and Sermon proved to be bright moments in the evening's discussion, Search Engine's Jesse Brown - one of the evening's special guests - had no problem pointing out a number of the movement's questionable strategies. Of particular concern was the impression that net neutrality was an inherently left-leaning issue, and not something that right-wingers would necessarily support.

Meanwhile, Brown noted that a separate movement, which aimed to bring overseas news network Al-Jazeera to Canada, had also approached those who had signed up for SaveOurNet.ca's net neutrality campaign. A number of people in attendance expressed confusion regarding the move, further clouding the goals of the net neutrality campaign.

Overall, the evening's discussion proved constructive. Those who were aware of the issue had the opportunity to question and discuss with those directly involved in the issue, while those with less understanding of net neutrality were, eventually, enlightened.

Yet, the confusion regarding net neutrality is frustrating. For an issue that directly affects a technology so prevalent in our daily lives, it's slightly maddening that such puzzlement is so widespread. While there's no doubting that the concerns of Brown and others are legitimate, it's these sort of issues in the first place that make net neutrality far more difficult to understand.

While last night's town hall was a good step in the right direction, net neutrality has proved to be an issue that still needs to be clarified, and in a way that's inclusive to all. Raising awareness is key because net neutrality affects us all; it's a campaign that's about more than just being online, but being on board as well.