It's a little known fact that there's an internet search giant within the heart of the city. While there's no large-lettered logo, nor the space for a sprawling campus, rest assured, Google is here - and right under your nose.

Hearing that one of Google's main Canadian offices was located within the Toronto Life Square building was an exciting prospect for a geek like me. Not only would I have the chance see our internet search overlord in the flesh, but I'd have the opportunity to meet the people who make it tick - and see how Google Toronto adds a touch of local flair to its unique office space as well.

To be fair, the company's Toronto location is mainly a sales and advertising branch, but an interesting one all the same. Those unfamiliar with Google's Mountain View, California headquarters might be surprised to know that the search giant's offices are far from the stereotypical monotony of the corporate world. Gone are the muted grays of office cubicles, instead replaced by a colourful and laid-back environment that appears more University lounge than workplace.

Yet, it's still an office, after all, so there's never any shortage of work to be done. There are, however, a number of things that make Google Toronto one of the weirder, yet wonderful, workplaces in the downtown core, and Google employee Tamara Micner was on hand to give me a tour. Meeting her in the company's sixth floor lobby, you could already tell this was a distinctly Google office, awash with a combination of reds, yellows, blues and greens.

Tamara joked that the swath of primary colours make some employees feel as if they've re-entered pre-school.

It's a colour scheme that repeats itself through the office; yet, there's a very distinct, Canadian flair to the building Google employees call home. Stepping off the elevator, I'm greeted with two, battered chairs, lovingly transplanted from the now-retired Montreal Forum.

Further down the hall, Tamara explained that those sorts of additions are intended to tailor each office as best as possible to the location they're in. She shows me to each of their conference rooms as a further example, which are all location themed from places across Canada. I see Inukshuk and West Lake Louise before reaching the lunch tables, appropriately named after the Calgary Stampede. 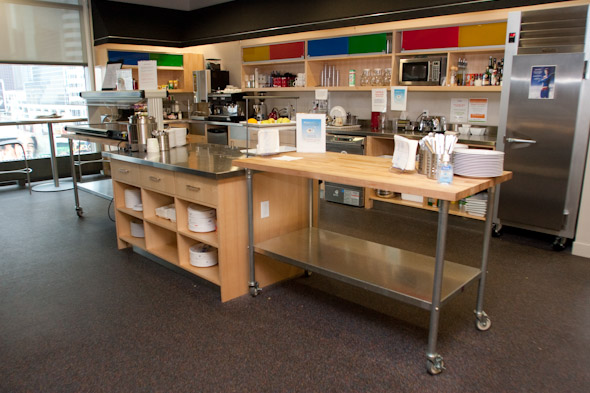 But do all these amenities and flair really improve the traditional office environment? Hoping to find an answer to that question, I had the chance to speak to Shannon Deegan, Director of People Operations at Google's Mountain View offices, and previously, and employee of the Toronto office.

"I remember coming into Google thinking, you could have the perception that they're doing this because they want people to stay late. Give them a free dinner and they're going to work longer hours. And then you get here and you quickly realize that that's not the reason for that," Deegan explained.

"I think that's the reason for the cafes, and the foosball tables. Some of it is to let off a little steam, because people do work really, really hard. But I think most of it is to get people interacting outside of scheduled meetings."

Google is by no means the first company to provide these sort of services to their employees, but I get the very distinct impression that they're the ones doing it best. It's encouraged amongst employees that some of the best ideas are the one's that happen outside of the workspace, and it's initiatives like these that try to break the monotony of traditional office life as much as possible.

But those aren't the only people habits the company has tried to break - in fact, the green initiatives employed by Google are probably some of the most rigorous in Toronto.

"There's this constant feeling that the environment matters, and I think that they encourage the offices to really do something that has a local impact," continued Deegan, when asked about the company's role.

In California, the company is known for its leading role in green-conscious projects. A large amount of the company's campus is powered by rooftop solar panels, with more still coming from one of the state's many, expansive wind-farms. While working from a Toronto high-rise doesn't always make these sorts of initiatives possible, Tamara explains how the company saves energy in other ways. 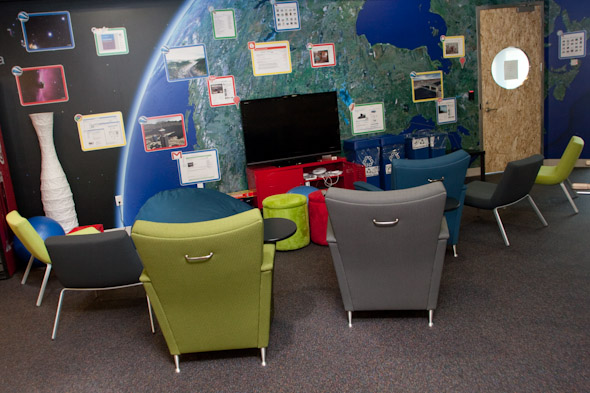 "One thing we do here is we work with Bullfrog Power, which matches your power consumption with alternative energy, like wind power," said Micner, on how the company offsets its carbon footprint in the city. "In Mountain View, we use solar power partly to power some of our buildings, so it's comparable stuff."

But from what Micner told me, this is only the tip of the iceberg: The rubber surface on sections of the office floor is made from 100% landfill-recycled tires; most of the chairs and workstations are made from anywhere between 80-100% recyclable material as well. Even the company's logo, which hangs from the reception area's ceiling, is made from at least 90% post-industrial recycled materials.

These are the sort of initiatives that you might not immediately realize, but they go along way in preventing waste, and promoting more renewable ideals. More so, it's the sort of innovation that Google encourages company wide, while challenging the traditional office stereotype as well.

For more pictures, check out my 'Google Toronto' set on Flickr. Many thanks to Tamara Micner and Shannon Deegan for having me as well!