The TTC, GPS, and mobile devices appear to finally be united! Using the satellite-based services of a company called NextBus, the TTC now has what appears to be (LIVE!) mobile-friendly, GPS-enabled tracking on our streetcar routes.

It's really easy to use. You simply visit the NextBus TTC web page, choose your route, then direction, then your starting point, and voila! You have predicted arrival times for the next streetcar(s). This is small-step-giant-leap stuff for Toronto transit. 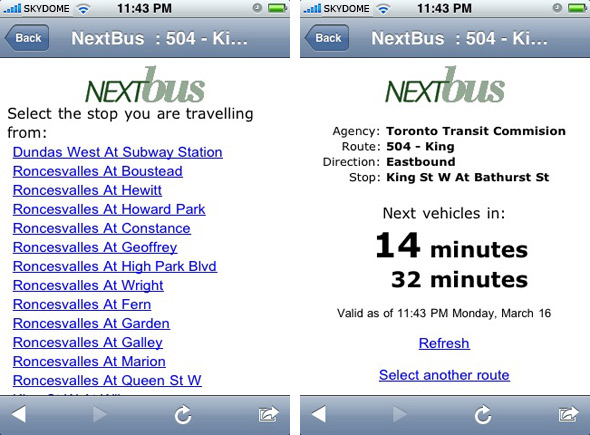 NextBus was awarded the multi-million dollar contract way back in September of 2006. The long wait aside, I'm super excited to see things finally starting to become functional, and can't wait to see this in fully developed form (and on buses).

Tonight, a Tweet by larrylarry at 9:48pm was the first I'd heard of the news of this Beta (or is it still in Alpha?). No related TTC news releases have been issued to my knowledge (we usually get them... although @braddttc IS on vacation), so this may or may not have been a "leak". On the NextBus site, Toronto has not yet been added to the list of transit system choices within Ontario (although Guelph and Thunder Bay do appear). The service is also not yet accessible via the TTC's official website (only a static streetcar schedule is posted there).

I was just about to crash for the night when I got the news, so I haven't been able to give the service a real test run yet, but I'm pretty sure we'll see a slew of early user reviews pour in on the web tomorrow. It may be that just a small number of vehicles are being tracked. Hopefully it's left live from now on, so we can try it out.

If you have had a chance to play around with this, feel free to drop your early reviews/comments/suggestions in this post. We'll gladly collect feedback and later send it off to the TTC and/or Nextbus. In the meantime, here's an explanation of how NextBus works.

UPDATE: Tuesday, March 17th, 3pm: Spacing is now reporting that the TTC has yanked all but two routes (the 510 and the 509) from the prototype. Le grand boo. I guess this makes sense though. Given that this is far from the finished product, there's not much point in the public having access to a system that isn't nearly ready for reliable use.