Tonight Joshua Davis (Wikipedia) steps outside his familiar medium of the web and debuts his first-ever line of housewares at the Umbra Concept Store.

Davis, a highly acclaimed web designer and Flash guru, is also in town this week for the Toronto leg of FITC. Yesterday he spoke to a packed room of conference attendees about his recent work, Tropism exhibition and his partnership with Umbra.

As it turns out, Davis was brainstorming with his business partner about how he could launch a housewares line when, as luck would have it, Umbra called. They didn't need to say much to convince him to start sending them design ideas; and today those designs are officially unveiled including a collection of household garbage cans, laundry containers, frames, prints, pillows, and bedding. All of them were designed in Flash. 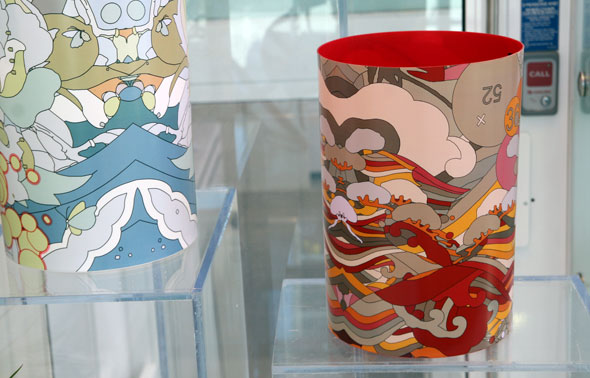 The good news for Joshua Davis fans is that most of the stuff will be for sale (or available for order) and if you get to tonight's party early enough you might just walk away with one of his signed cans. The only item that won't be available is the bedding. Word on the street is that Umbra is still mulling whether to take this into production. Early feedback is that it might be a bit too kid-friendly and they're not sure it's something that's going to sell. So, if you like it, definitely let Umbra know!

For more about tonight's launch at Umbra, check this flyer or photos on Davis' Flickr.