Toronto.com is celebrating its ten year anniversary, or so enthuses a press release which arrived in my inbox this morning. Aahh, Toronto.com. What fun would we have if we didn't have a site like you to kick around? In fact, part of the reason we started blogTO way back in 2004 was because of the general consensus that existing Toronto web sites sucked - with Toronto.com the most annoying culprit of the bunch.

So with its tenth anniversary upon us we thought it might be fun to take a closer look at Toronto.com. Despite all its detractors it's still the elephant in the room. It gets more traffic than any other site covering Toronto culture, restaurants and events. The site claimed to reach 1 million unique users in January which would put it ahead of Now Magazine followed by dine.to, Martini Boys, blogTO, Torontoist, Torontolife.com and Eye Weekly.

But despite its success, longevity and prized domain name all is not well in Toronto.com land. A quick peak at the chart above (yes, that's declining web traffic) tells the beginning of the story.

Last Spring, when traditional media finally started taking the emergence of blogs and social media more seriously, and trends like web 2.0 had begun to cement themselves as more than passing fads, I received a call from a local head hunter asking me to interview for the position of General Manager at Toronto.com.

Toronto.com was broken and needed fixing, he admitted. Everyone knew it. Toronto.com knew it. Parent Torstar Media (also owner of the Toronto Star) knew it. The higher-ups wanted to put a new team in place that would make the site more interesting and relevant in today's ever-changing online landscape.

For the record, I agreed to meet with representatives from Torstar Digital but declined to be formally interviewed or considered for the position. Weeks later they announced they were filling the position internally - Candice Faktor would be the new GM - a nice endorsement for Ms. Faktor but not exactly a sign of embracing new ideas and energy from those not already indoctrinated in the Toronto.com culture. 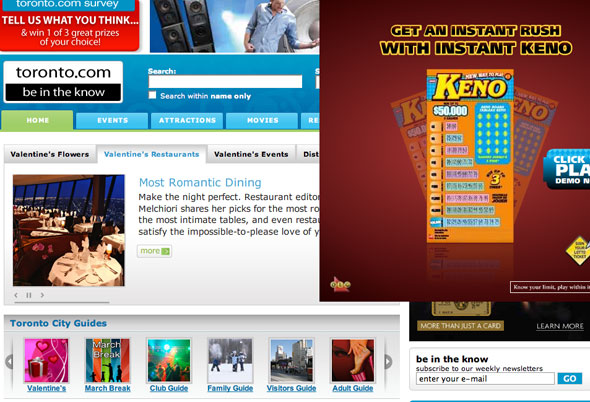 Over the course of the summer Toronto.com then started rolling out some new changes. First there was the new site design - a clear statement that the new team was embracing the aesthetics of web 2.0. I say aesthetics because I'm referring to the look of the site only. Beyond a new vibrant colour scheme, some glossy buttons and rounded corners, the site failed to embrace the principles of web 2.0 - openness, community and collaboration.

Looking at Toronto.com today there's no linking out - an old school way of thinking (Hi Eye Weekly and Now Magazine!) that you insult your readers' intelligence and pretend that no other sites or competitive information sources exist. You never link to other sites, never mention the competition and do whatever you can to prevent readers from leaving your site and exploring the vast wonders of the Internet.

Smart strategy? The numbers likely tell the story here. As indicated in the above charts, both page views and reach have been declining for some time. (The charts above show a three year time frame). In my discussions with media planners (folks who buy online ads on behalf of large advertisers) they continue to be disgruntled with the site. It's too expensive and doesn't perform well - but they often still buy ads on it because it remains the largest site in Toronto and their clients ask for it. (I'll ignore for now the possibility they might be influenced by free gifts and Leafs tickets)

There have also been a number of missteps in launching and integrating partner sites. By now, visitors to Toronto.com and The Toronto Star's web site will likely have noticed the integration of something called Our Faves. It's a bit of a hapless site where they ask readers to create a profile and a list of their favourite places in the city.

We've spent about a million dollars less on a Facebook application that does something similar. And guess what, it has more users. Their most popular restaurant - Burrito Boyz - has only 71 faves compared to 161 - for Salad King - on blogTO's Toronto Faves Facebook Application.

So what's next for Toronto.com? Is there a magical prescription to cure what ails them? For starters, it will likely take more than hiring a new Managing Editor (Rob Maurin). The writing continues to be formulaic and safe with recent features on March Break activities and Valentine's Day Singles Events as examples A and B. It will require a new approach (let's start with user comments and linking out) that embraces the way all of us like to experience the web.

If gossip that floats around Toronto web circles is accurate, Toronto.com is still losing money. For a web site with the default city domain name, ten years under their belt and the financial support of one of the largest media conglomerates in North America that's a champagne celebration short of inexcusable. But, hey, since it's an anniversary and we don't want to spoil the party - here's to you Toronto.com.