It was a rough night for Toronto Maple Leafs fans Thursday.

Not only did we lose our first game against the Montreal Canadiens, the Leafs also lost their team captain John Tavares—likely for the rest of the playoffs—following a brutal, concussion-causing collision with the knee of Habs player Corey Perry.

But Michael and Sara Adamson, arguably two of the Leafs' biggest fans, are optimistic about our chances.

If the saying Go Leafs Go was a house, it'd be the Adamsons' Toronto home on Merton Street, which is currently draped from roof to lawn in Toronto Maple Leafs gear.

Like they do whenever Toronto makes the playoffs, the Adamsons have completely covered their home, a.k.a. #LeafHouse, with banners, jerseys, and a Leafs Nation scoreboard (tragically now sitting at 0-1.) 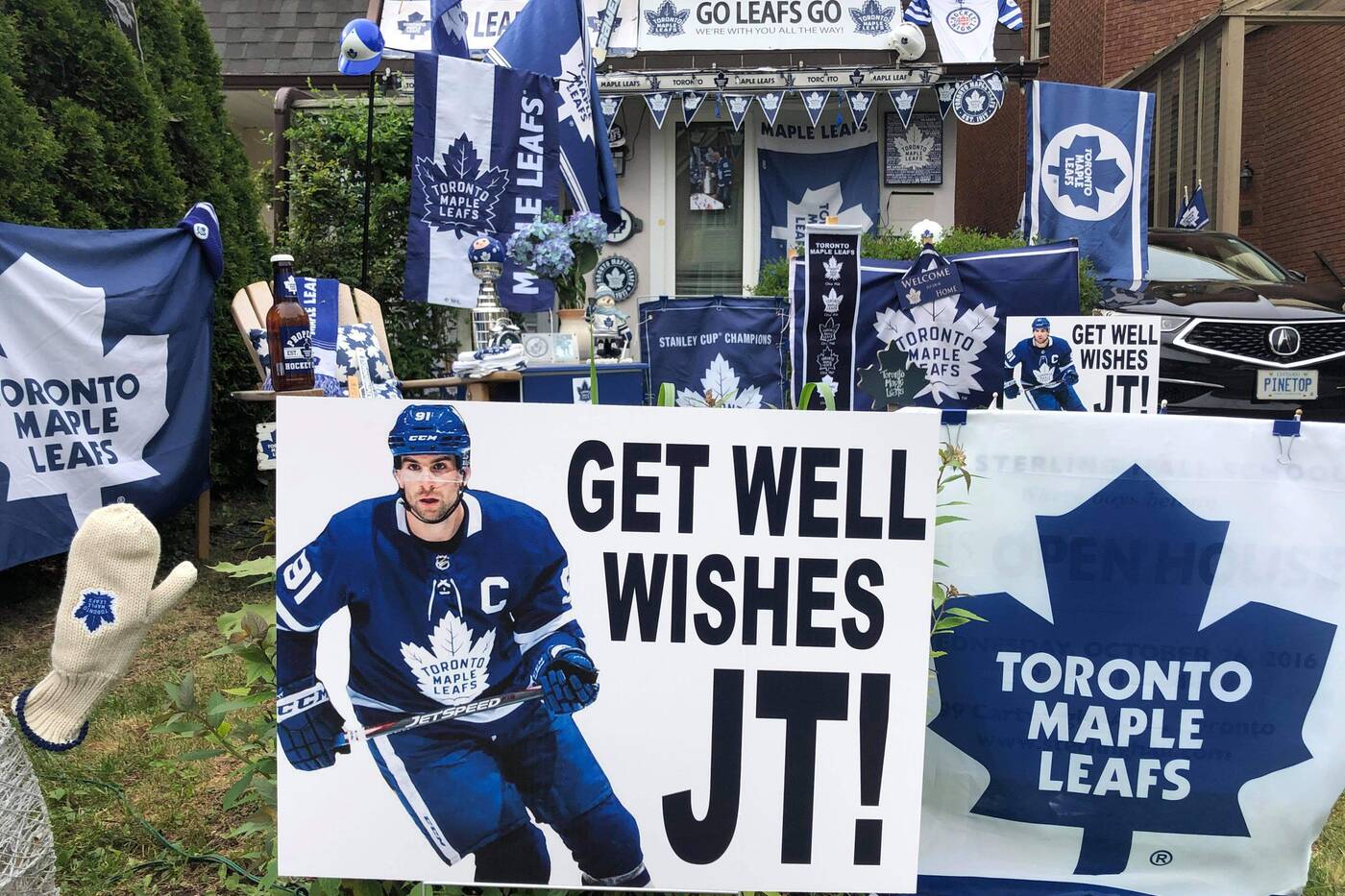 Michael and Sara Adamson have added a get well sign for Maple Leafs captain John Tavares after a brutal concussion during game 1 in the series against the Habs. Photo courtesy of Michael Adamson.

The Adamsons tradition started in 2000 with a few flags and a little poster, says Michael. By 2013, the Leafs had made it to the playoffs again. They added a little more stuff.

Over the six years since then, the couple – both teachers – have been acquiring more Leafs merch, upping the blue-and-white paraphernelia to about three times the original intensity.

"This is what me and my wife do together, she's such a driving force of the display," says Michael to blogTO.

"It's a lot of fun. It's fun for us to cheer for the team... It’s strange not having crowds of people come over, but the honks are really great."

Usually the Adamsons put out a table hockey game in front of the house and turn the occasion into a kind of block party. This year's COVID-19 edition has been a private affair, with a new snowman on the lawn sporting a pandemically appropriate Leafs face mask.

"This year with the pandemic, we especially want people to be happy," he said. "It’s amazing the neighbours don’t complain, but if it was year-round, it might be different."

Obviously, the Adamson were hoping to tally a Leafs win Thursday night with the NHL playoffs kicking off, but the Habs ended up taking the game 2-1. The couple has since added a get-well sign for Tavares since his injury.

The Merton Street home has obviously attracted some hate from Habs fans, but thats to be expected, considering the rivalry between the Maple Leafs and their sworn enemy is more 80 years old.

Despite the fact that it's been 54 years since the Maple Leafs won the championship (the longest drought in the NHL), Adamson says he's "straight-up optimistic" about the Leafs finally taking the title as champions this season.

"The Leafs are better built for the playoffs this year and they've been topping the North all season long. They're going to be just fine."

Here's the schedule for the remainder of the series.