A Toronto running group is comprised of chefs from some of the city's most popular restaurants who cook for each other after their runs.

While Toronto has a multitude of running groups for people of all ages and abilities, The Food Runners may be one with some of the best perks. 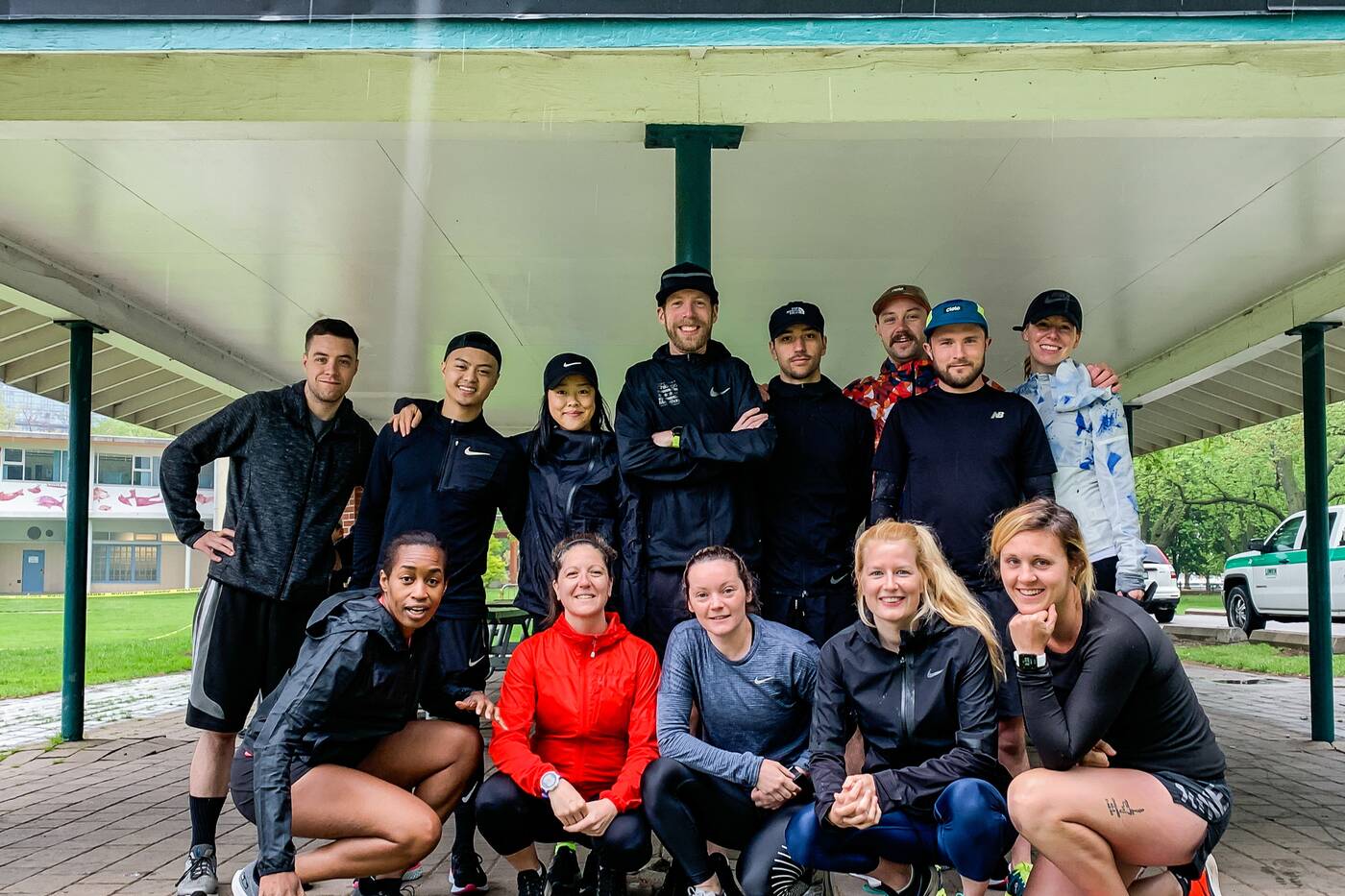 The Food Runners have been meeting up to run for six years.

Founded by Chuck Ortiz in 2014, the majority of the group is made up of people from the city's restaurant industry. Prior to COVID-19, they would meet up every Wednesday for their weekly run and refuel session.

This consisted of running anywhere from five to eight kilometers and then sitting down for a snack or meal prepared by one of the group's chefs. Each week the cooking duty would rotate, so everyone got a chance to provide the group with their specialty. 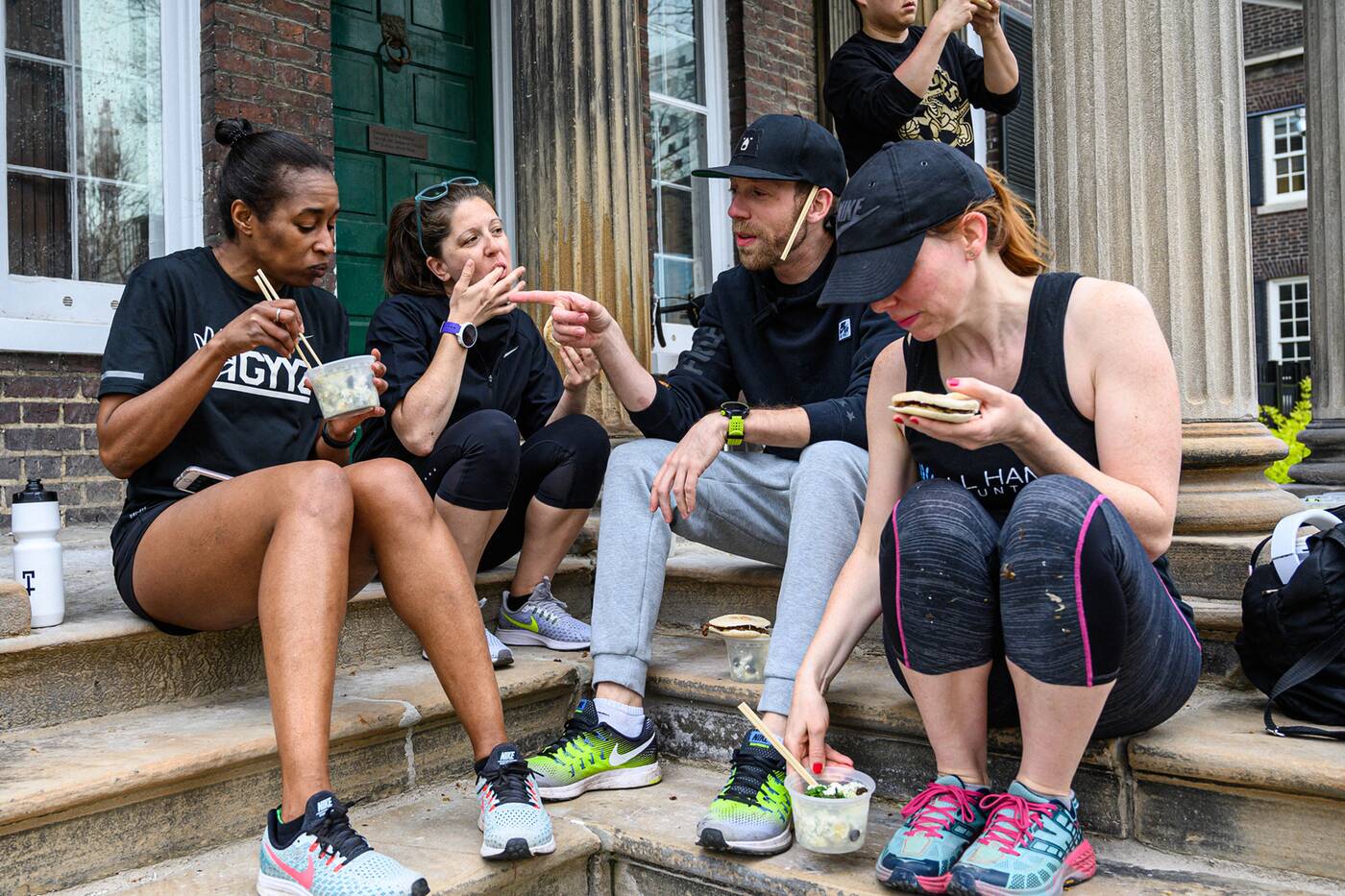 Prior to COVID-19, the group would sit down to enjoy a meal or snack together after every run.

They have chefs from restaurants and bars across the city, like executive chef Hans Vogels from Momofuku Noodle Bar. Other places that have been represented in their group include Bar Piquette, Sugo, Maker Pizza, Eastbound Brewing Company, Matty's Patty's and more. 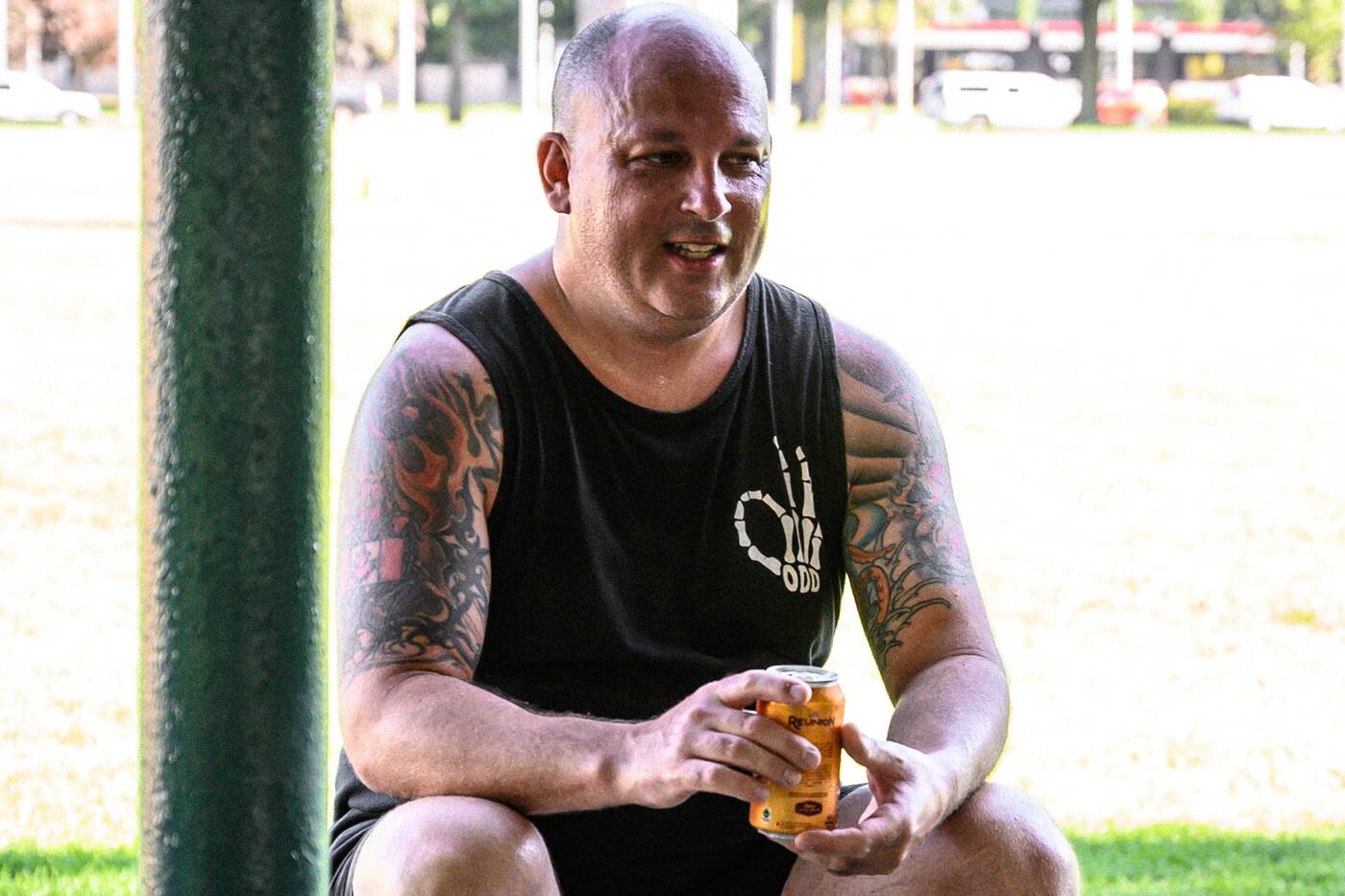 Hans Vogels is an executive chef at Momofuku and a member of The Food Runners.

Cayla Schafer joined the group in 2016 after working in the restaurant industry for over 10 years. She was introduced to The Food Runners after a co-worker brought her to one of their runs, and since then she's been an avid member.

She told blogTO that the food prepared for them is top-tier. She joked that all of the meals have made her accustomed to a pretty high standard of cooking. She says that she had one salad that she still dreams about. 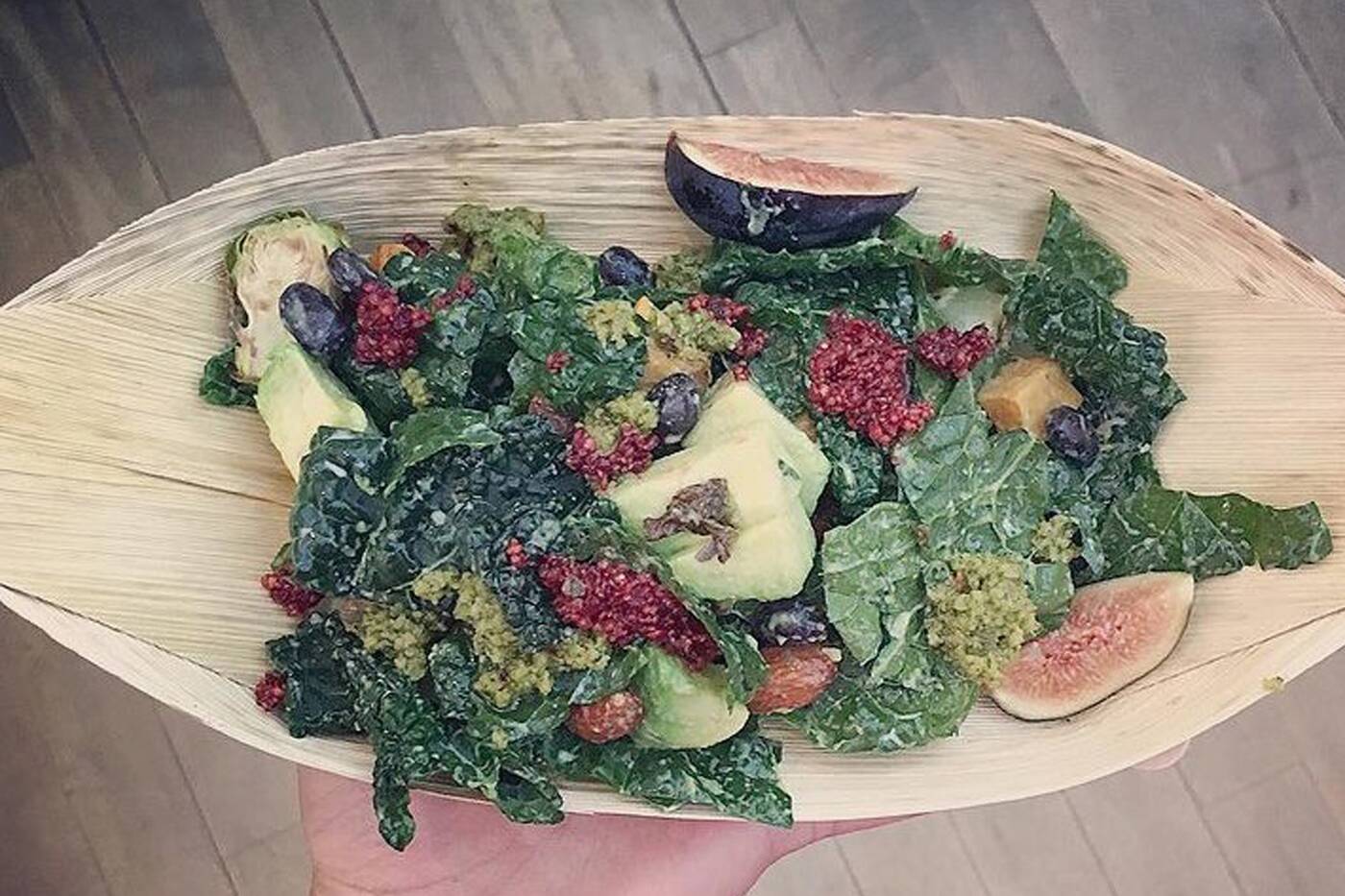 This salad was Cayla Schafer's favourite meal with The Food Runners.

"The salad changed my life. It was made from dino kale, roasted sweet potato, brussels sprouts, avocado, almonds, figs and citrus vinaigrette. It sounds so simple, but it was like an explosion of flavour," she said.

Ortiz told blogTO that the meals can range greatly, including everything from smoothies to ramen noodles to breakfast pizzas. Of course, any food is greatly appreciated after running up such an appetite.

The idea for The Food Runners began when Ortiz was working at a food magazine. He wanted to help address the issue of addiction and mental health in the food industry. 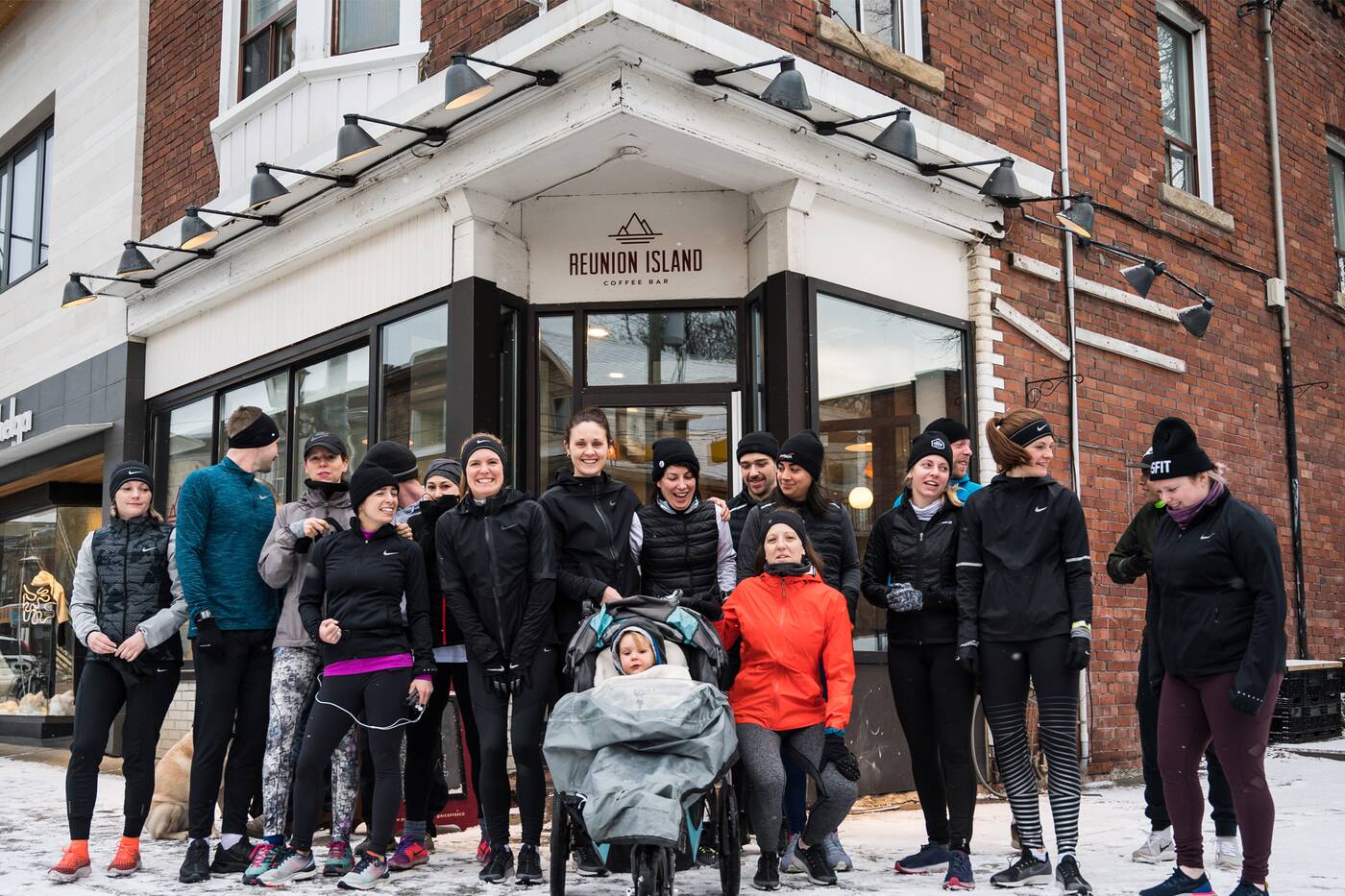 The Food Runners at Reunion Island to refuel after a run.

"Anyone that has worked in the industry knows how hard it is. I drank so much when I was in the industry. It’s a rat race, everyone's trying to outwork everyone else. It's high stress, high pressure, high volume, all the time," said Schafer.

Ortiz believes that problems with alcohol, drugs and poor mental health are not uncommon for restaurant workers, but it's an issue not often talked about. 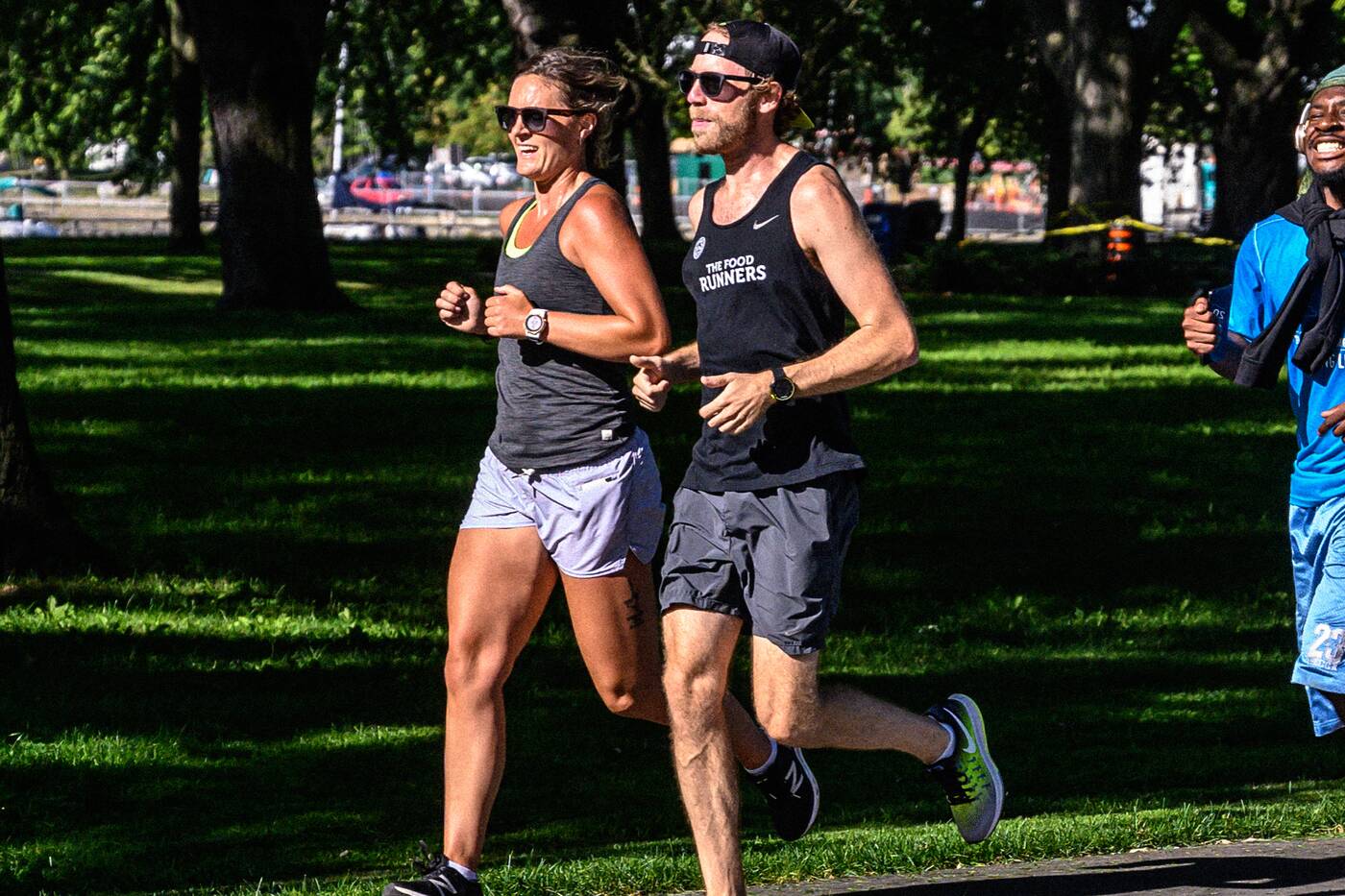 The Food Runners run year-round, with an exception of a Christmas break.

"I decided to get people together and do something healthier. A lot of chefs that I know don't have the chance to do anything healthy in a community setting."

So he decided to reach out to Nike and see if they would support him in his mission. Luckily, they quickly partnered up and so The Food Runners was born.

The company provided the group with the proper shoes, running gear, and equipment to get everyone started. 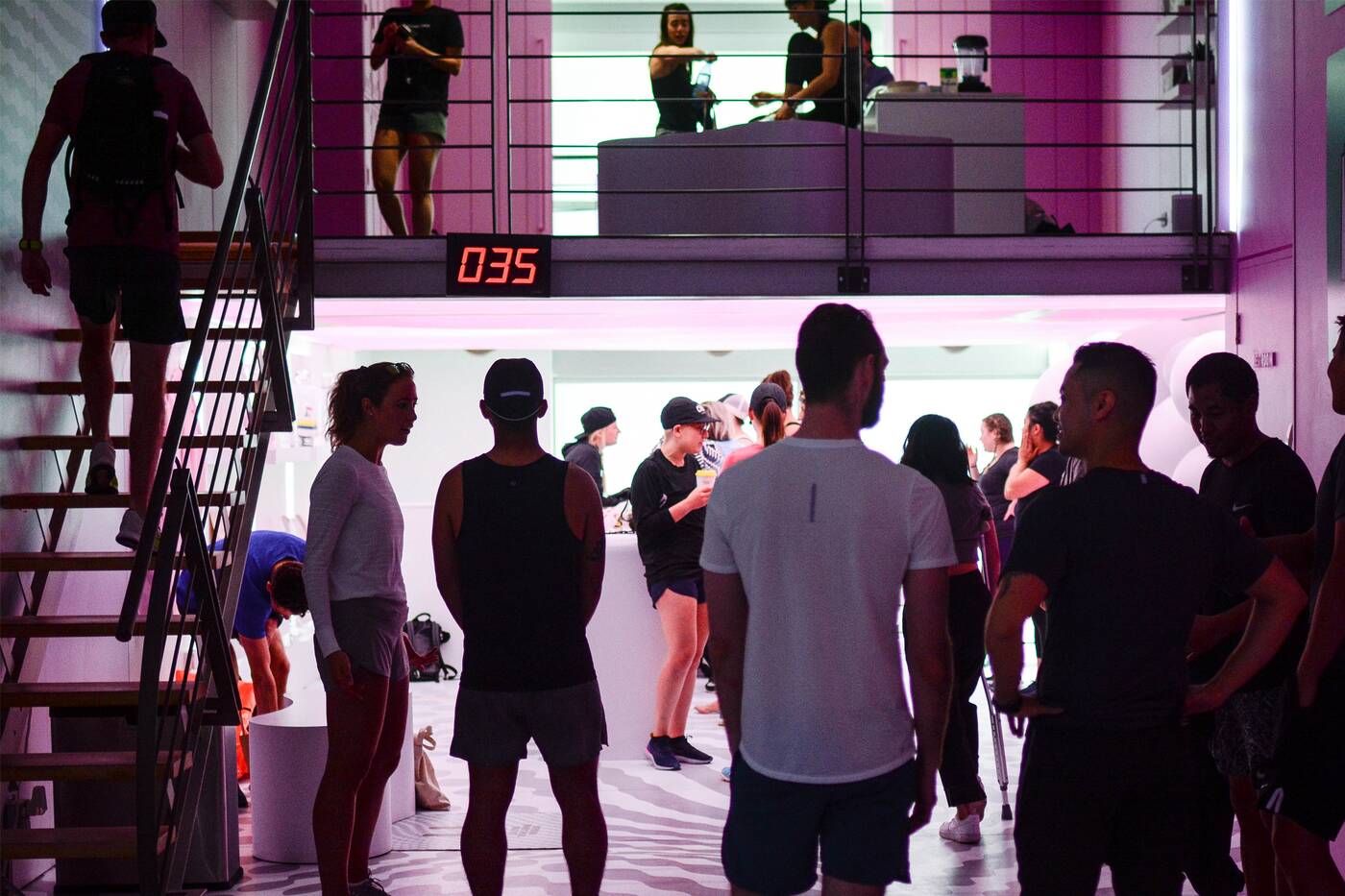 The Food Runners use the Nike Loft as a home base.

"Nike was kind enough to give us access to the Nike Loft, which was basically our home base. But the most important thing about the partnership was them giving us a training coach," said Ortiz.

The group has now been running and eating together for six years. Ortiz tells blogTO that this is actually the first time in its history where they had to take an extended break due to COVID-19 restrictions.

He says that even back when Toronto wasn't in full lockdown, they decided to break from having weekly meetups. Of course, following recommendations was important to the group, but they had a more personal reason for the decision. 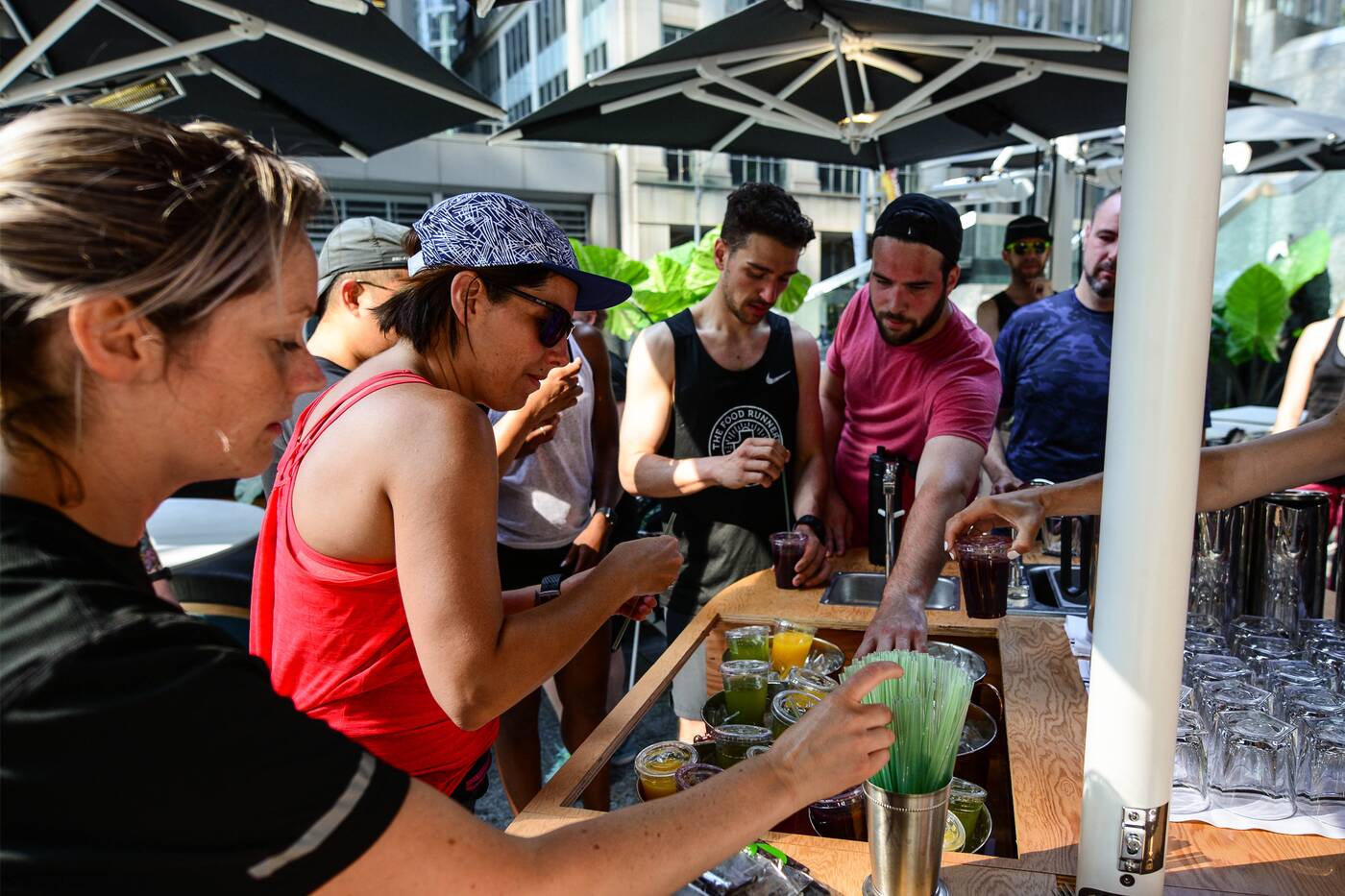 Sometimes the group's refuels are as simple as a smoothie.

"Since a lot of us and our friends are in the food industry we were all greatly affected by the pandemic. We felt that it was our responsibility to do our part in staying safe. It wouldn't make sense for us to continue meeting up to run and eat when our community is struggling," said Ortiz.

Currently, the group has been working out and running remotely. They have a group chat which allows everyone to stay in touch and share their routes. However, the group is optimistic that they will once again be able to run together. 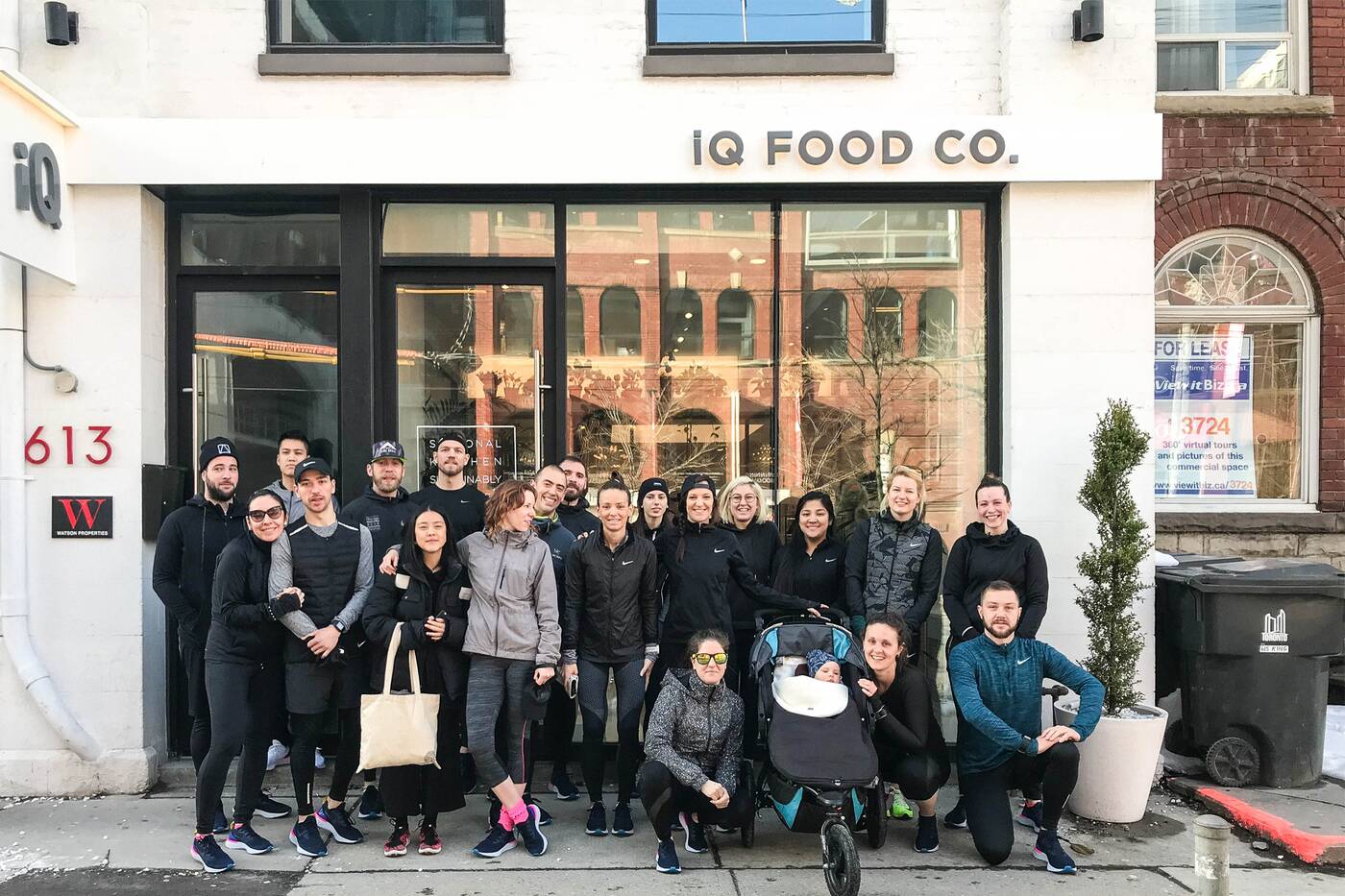 The Food Runners outside of IQ Food in Toronto.

They are known for being a very welcoming and uplifting group. Schafer herself had felt intimidated by other run groups in the city, but says she has made some of her best friends through The Food Runners.

"After COVID-19 we're definitely going to come back because there's so much power in the community aspect of running," said Ortiz.

He would love to see The Food Runners evolve into a more holistic program that includes yoga and other forms of training, along with their runs.