The rules and regulations for Ontario business owners have changed and shifted countless times since the pandemic first arrived, and many have complained of inconsistent and unclear messaging from the province since the very beginning.

Now, one gym owner in Toronto says the rules surrounding outdoor fitness classes for regions in the lockdown phase are just another example of this ongoing issue.

Thomas Wendelboe is the owner of Breaker Strength, a boutique fitness facility in North York. He told blogTO he invested time and money into creating a safe outdoor space for small fitness classes after the province announced that Toronto would be going into lockdown because the guidelines initially stated that was allowed.

But just three days later, the province quietly and quickly changed the rule.

"Recognizing the seriousness of COVID-19, we built an outdoor add-on to our fitness facility over the summer in order to provide our members with a safe, socially distant place to work on their physical and mental health," Wendelboe told blogTO.

"When the colour-coded system was released, we saw that outdoor fitness was allowed, even within the confines of the grey lockdown. In order to best serve our members, we ordered non-walled tents and heaters in preparation for the inevitable winter shutdown."

A screenshot of the province's guidelines for the grey zone taken by Wendelboe and shared with blogTO from the late afternoon of Friday, Dec. 20 — the day the lockdown was announced — states that "outdoor sports, classes and use of amenities, limited to 10 people" are allowed. 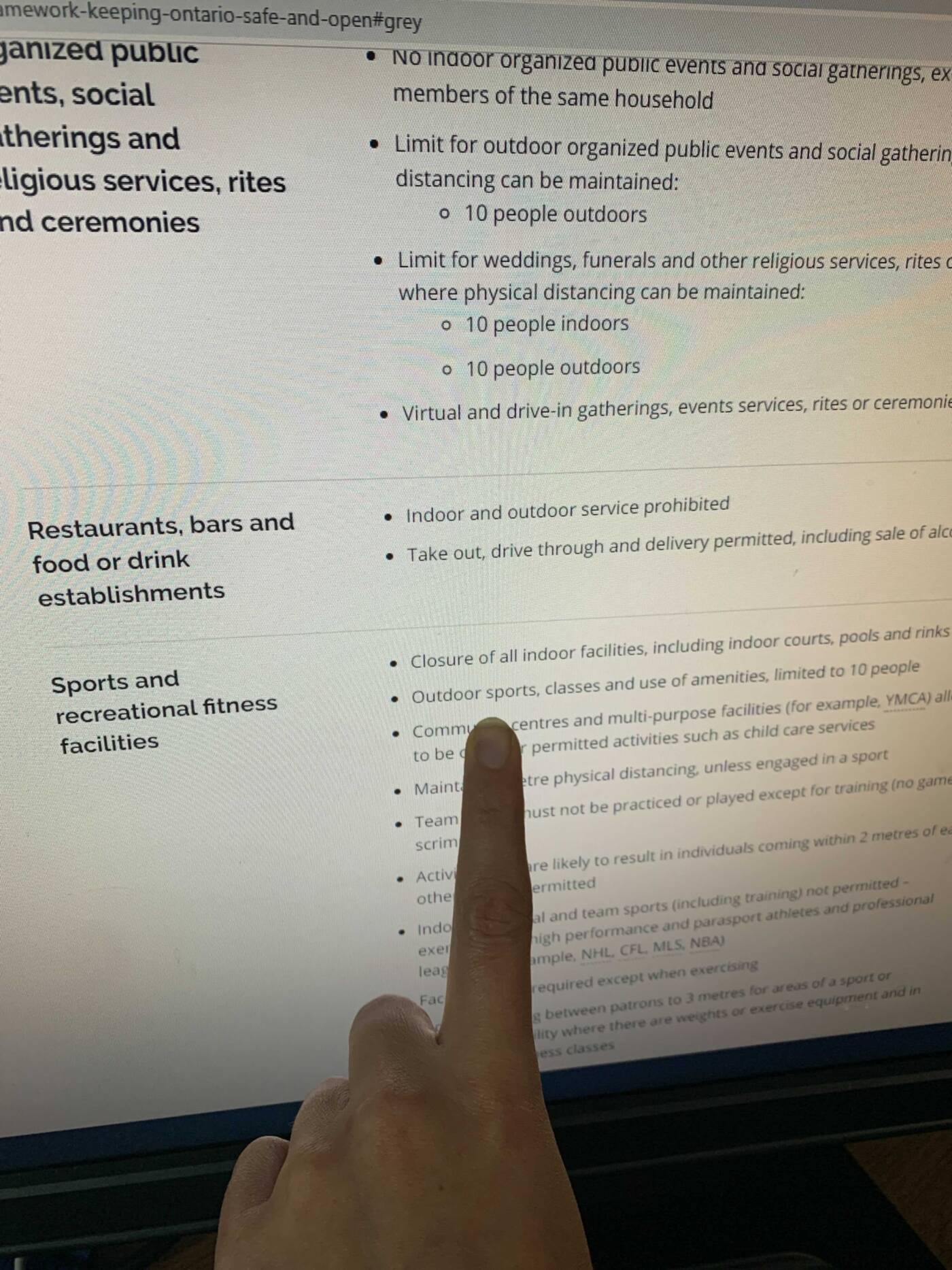 After seeing these rules and verifying that they hadn't changed later that night, Wendelboe said he invested thousands of dollars and dozens of hours into shoring up an outside training space fit for winter over the weekend.

"Our members braved the snow as early as 6 a.m. Monday and our staff showed up early to shovel and salt," he said. "While it wasn't perfect, everyone was happy to have a space to work on their health and wellness."

But by Monday afternoon, Wendelboe discovered that the rules for outdoor fitness had been updated to indicate that facilities for both indoor and outdoor sports and recreational fitness activities must be closed.

The gym owner said he immediately pivoted to online classes upon learning of the updated rule, but many of his customers said they much prefer to work out in the snow than their cramped 500-square-foot apartments and shared living spaces.

Toronto friends: Anyone know of fitness studios planning to offer physically distanced, outdoor classes through the winter? My beloved 6 a.m. #F45 parking lot classes are over. I’m not afraid of snow. I am afraid I won’t exercise without someone yelling at me.

And it turns out Wendelboe isn't the only gym owner that was caught off guard by the rule change.

"Over the last two days I have spoken with other gym owners, many who did not know about the switch in the guidelines," he said.

"It turns out, neither did the 'Stop the Spread' hotline, which has provided varying answers to gym owners throughout the city with some people told outdoor training is fine, and others being told it is forbidden."

But beyond the confusing guidelines, Wendelboe said the problem is made worse by the lack of reasoning for banning outdoor fitness.

He said it is generally understood that exercise is essential for maintaing overall health and helps prevent things like obesity and diabetes, both of which are associated with increased COVID-19 mortality rates.

With gyms closing again, my mental health is at all time low. I vouch for more Free Mental Health counselling centres! As many are no longer taking anymore clients. Help the citizens of Toronto😥 Phone/text counselling isn’t where it’s at..@fordnation @TOPublicHealth

On top of this, he said many Toronto residents do not have the resources or space to exercise in their own homes.

He added that some of his clients, including doctors, nurses and other professionals of all ages, have actually asked him to keep the outdoor space open, despite the guidelines, promising to keep quiet about it.

"The ban on outdoor training is nonsensical from a scientific perspective and is unfairly punishing people who don't own large properties," he said. "While operating indoors is possible with proper ventilation, we understand that enforcement is not likely possible. However, ventilation isn't an issue outside."

Gyms have literally been open for 6 days in Toronto after being closed for 6 weeks and Toronto Health thinks they are the cause of the increased cases? I’m no scientist but even someone with my IQ knows that makes no sense. #COVID19 #COVID19toronto #COVID19Ontario

Mostly, though, Wendelboe said it's the government's lack of clarity that is making it impossibly difficult to run a business in these already challenging times.

"The government is making it very challenging for me to personally remain positive. I am able adapt to guidelines and want to do my part to stop the spread of COVID-19, but the illogical last minute changes make it impossible," he said.