Donaldson becomes only the second Blue Jays player to be named MVP - George Bell won the award in 1987.

Going into today's announcement there was much discussion whether Trout or Donaldson would walk away with the prize. Cain was never really in contention despite the hype video put together by the Royals earlier this week.

Both Trout and Donaldson had numbers strong enough to win but voters were likely swayed by the Blue Jays' better team performance - they captured the American League East while the Angels failed to make the playoffs.

Donaldson established career highs this year of 41 home runs and 123 RBIs. He was acquired from the Oakland A's during the 2014/15 off season in a trade that saw Canadian Brett Lawrie go the other way.

Donaldson quickly became a fan favourite for the high flying Blue Jays. His man bun even prompted one fan to re-design the Blue Jays' logo. 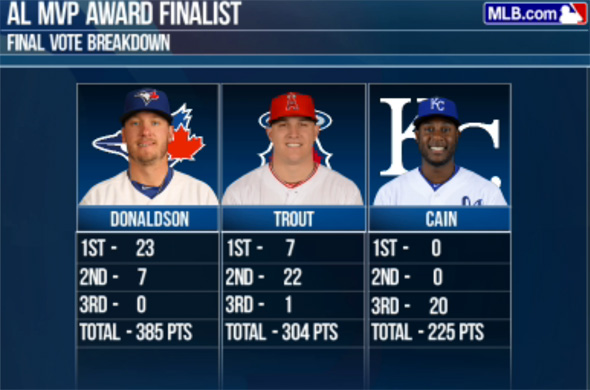