Sonic Boom officially welcomed the public to its brand-new space in the Robertson Building at 215 Spadina Ave. last month (and held a massive funeral party for its former Honest Ed's digs ). The change of address for the iconic record store, which has spent the last 13 years serving audiophiles in the Annex , with a newer location in Kensington Market , comes reluctantly after the sale of Mirvish Village forced them to vacate the lower portion of Honest Ed's . Thankfully, the big move hasn't wiped out the store's inventory or aesthetic.

Many frantic hours were spent prepping the new Boom for its grand opening on September 27. The space was most recently used as an American Apparel factory outlet , and while the staff already had their work cut out for them to exorcise the ghosts of improperly dyed metallic jeggings from the premises, an equally difficult task was combining inventory from two separate stores into one unified location. 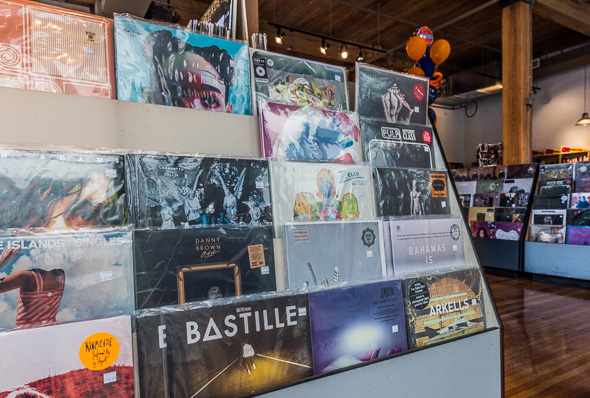 As you may recall, Sonic Boom's original Bloor Street flagship was bigger than the one in Honest Ed's, hence the second branch in Kensington Market to house the overflow of vinyl and old-school paraphernalia. But with these new digs measuring a solid 13,000 square feet and centrally located on the southern edge of Chinatown, it made sense to bring everything together under one roof again. 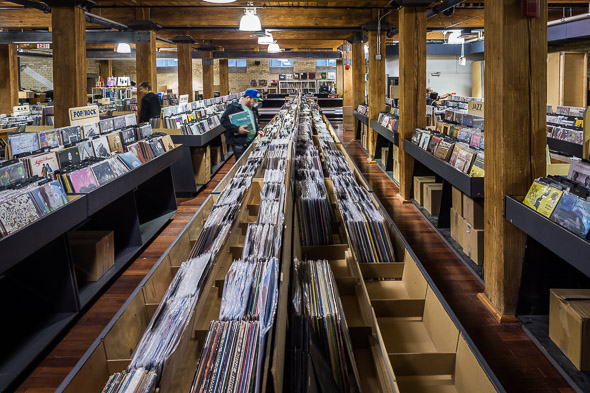 Walking up Spadina's east side, I was immediately greeted by the storefront's expanse of large windows, one emblazoned with the distinctive orange and blue logo. These massive glass panes will soon be filled with Sonic Boom's signature window displays designed by Tim Oakley, but for now they let a flood of sunlight wash over the front room. High ceilings and exposed wooden beams make for a decidedly more urban-chic feel than previous iterations of the shop. 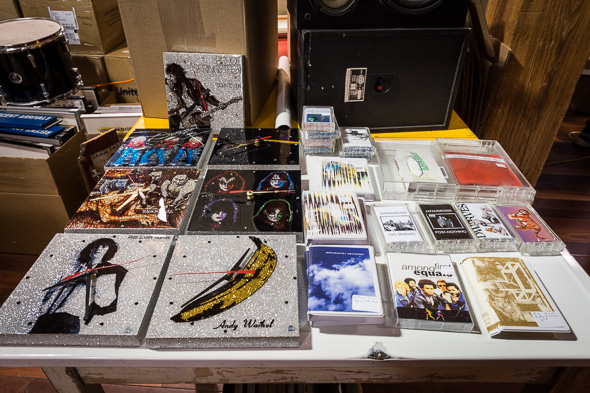 "The top floor is kind of a smaller representation of the store as a whole," says owner Jeff Barber. It has a little of everything, including new releases on CD and vinyl, audio accessories like Urbanears headphones and Crosley turntables, plus Herschel bags and other fashion accessories. The entirety of their book collection is shelved along the back-right wall, with a pretty replete catalogue of 33Ă˘âŚ" paperbacks that's tough not to geek out over. 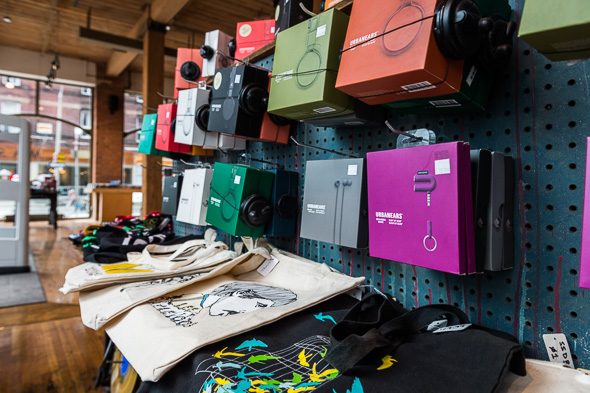 The merch on this level is accented with a bit of quirky decor that'll be new to you unless you visited the Bathurst location during it's final days. The "Captain Fantastic" Elton John pinball machine is charming and totally makes sense in the midst of all this vintage music gear; the animatronic stuffed bear looming over a container of batteries may need to be explained to me, though. 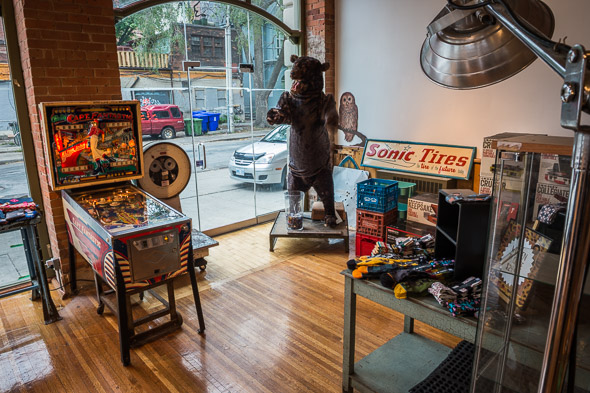 Descending down the stairs at the back of the room leads me into the vastly bigger basement, which contains the bulk of the music selection. The rows-upon-rows of new and used stock will be totally recognizable to any previous Sonic Boom patron - every music genre is still well-represented here, though with particular emphasis on rock and indie. 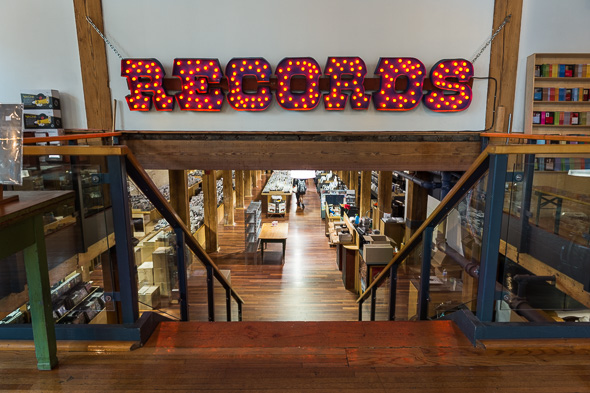 A pretty sizable DVD and Blu-ray collection is starting to fill out the front half of the room, while display cases towards the back show off cool box-set and oddball collectables (for example: thanks to this setup, I now know that a Celine Dion/Anne Geddes collabo exists. Amazing). 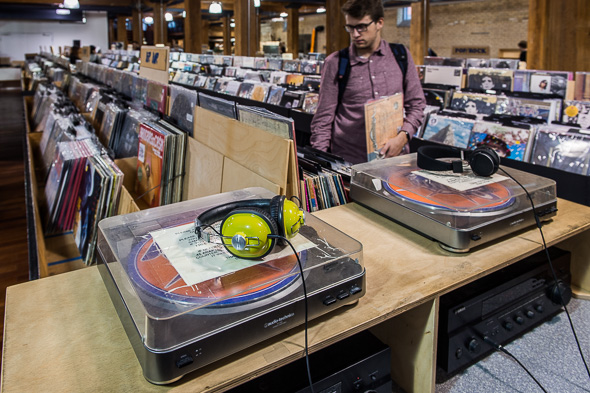 That back end of the basement is where Sonic Boom will continue the tradition of in-store concerts, which in the past have featured the likes of Dinosaur Jr., Sloan, Aimee Mann and The Weakerthans , just to name a handful. The stage isn't set up yet, but the stack of guitar amps and mic stands against the wall are a sure enough sign of live tunes to come. 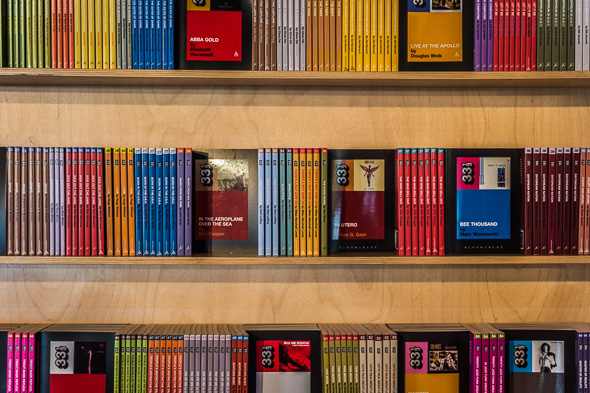 Leaving the Annex behind was surely a tough sell for both Sonic Boom's customers and crew, who've come to consider the store an integral part of the neighbourhood. But the new address' increased foot traffic, expanded space and close proximity to Queen and Spadina's many hip hangouts should ensure that not much will change for Toronto's largest independent music shop. "We're sad to leave the Annex," Barber says, "but we're excited about becoming a part of this neighbourhood." 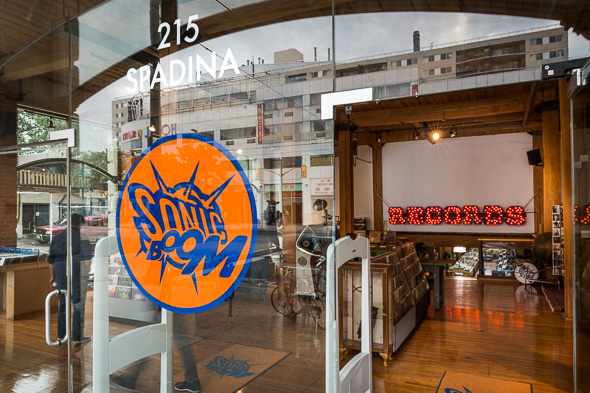