Seven Crowns Tattoo is your definition custom ink shop. Not your typical storefront shop on Queen or Bloor. Nor is it downtown like some of the other shops we've checked out. They're the type of shop that you suss out, knowing what to expect when you walk in. 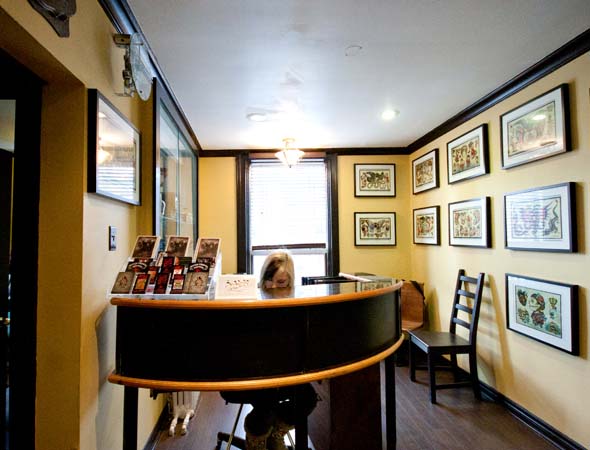 Seven Crowns is the only tattoo shops in midtown, a stone's throw from Yonge and Eg. As I walk along Yonge passing a row of independent restaurants, the odd Starbucks and some other cafĂŠs, I see Seven Crowns' unassuming sign. That's all. A sign and a door leading you up a set of stairs. At the top of the stairs, on your right is a hair salon, brightly lit and as you would expect. On your left is a tattoo shop with a different flavour. 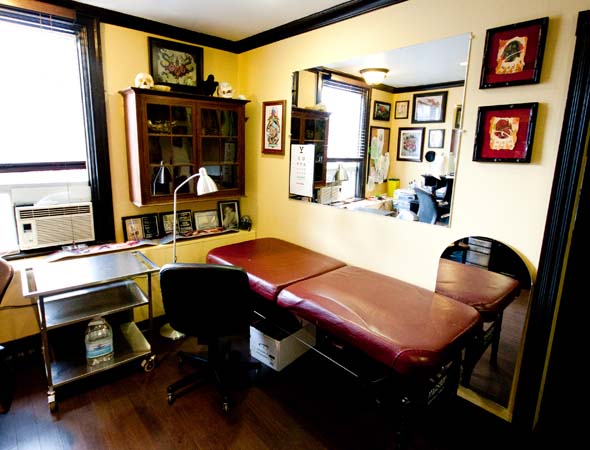 There's no flash tattoo art on the walls, something common at most of they city's top ink joints. Well, that's a half-truth; there's one small collection of flash from 1925. The shop's classic aesthetic, in co-owners Matthew Ellis, 37, and George Brown, 36, own words, is turn-of-the-century. Well, turn-of-the-century saloon with the din of tattoo machines. They both sport playful facial hair and are both clad in black. The shop is equal parts art and antiques in the main section, as they own two of the suites on the floor. They recently expanded and added the front suite where they have the reception desk and a couple tattoo beds this summer. They also expanded to a current tattoo staff of five to help support the area's burgeoning walk-in crowd. 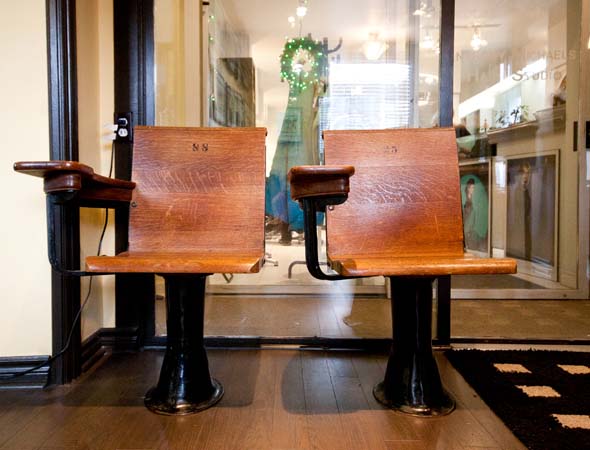 Ellis and Brown both worked at Way Cool Uptown for 10 and seven years, respectively. Before that, they both had completed apprenticeships and paid their industry dues. And with solid clienteles and reputations built, they decided to branch out. To open a custom shop. "Just not the everyday, run-of-the-mill work," says Brown, perched on one of the shop's stools. And with no other tattoo stores in the immediate vicinity, they set up shop in 2008. "It hasn't been completely bastardized up here yet, and hopefully we can hold onto it," says George, speaking of the locale. "We thought we would inject something cool into it." 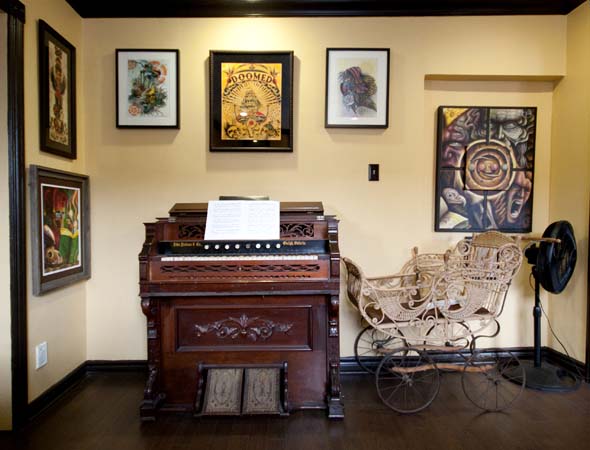 Sitting there, chatting with them, Ellis and Brown are no-bullshit guys. They're there because they genuinely seem to enjoy what they're doing. And that's part of the reason why they got out of the storefront tattoo scene: complacency to the artform. It has now become a rule at Seven Crowns: "Complacency is not acceptable here," Brown insists. Because, with a half-laugh, Ellis explains that about 40 percent of his work is cover-ups from "scratcher" shops. And that's just plain sad however you cut it. 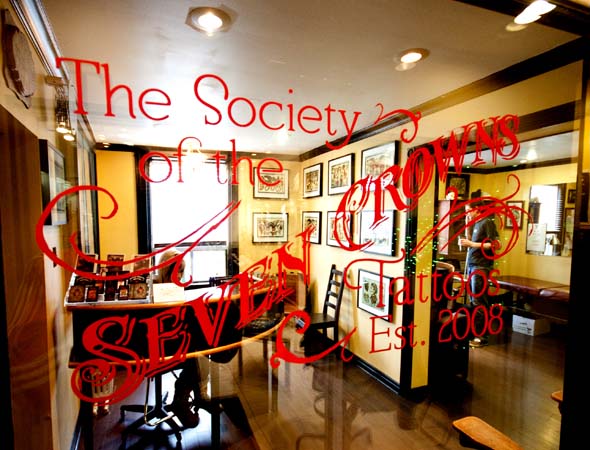 Asked to explain their individual styles, they take pause. "We all have our own bend on those traditional styles," says Brown. It goes along with the store's classic, unique vibe. Even when asked to do flash work, they put a custom spin on it. "You start to develop a style of your own. Well, you're developing away from a style. The tattoos have committed styles, the artists don't exactly," explains Ellis. And that's why all they need is a front door with a sign - they have carved out a receptive clientele based off their work alone.

"Most people are seeking us out, not necessarily for us, but for what we do," says Ellis. That typically speaks for itself.

All tattoos are at $150/hr across the board. "Hagglers can haggle elsewhere," says Brown. 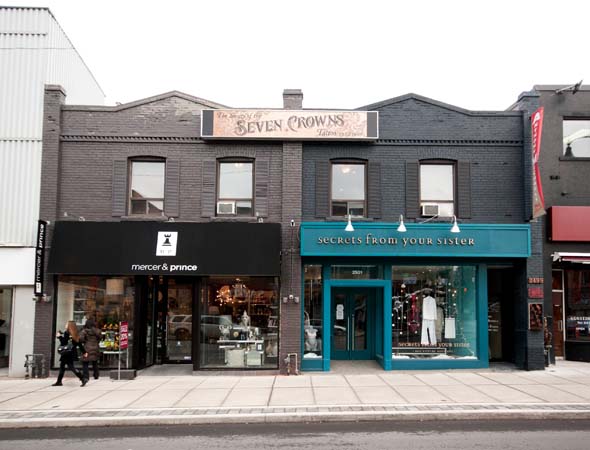