Tuk Tuk Canteen is a cozy snack bar inspired by Cambodian cuisine and the flavours of Southeast Asia. The Roncesvalles restaurant is in the space that was once home to burger joint The Rude Boy.

It's named after the three-wheeled, motorized rickshaws that can be found in Southeast Asia. 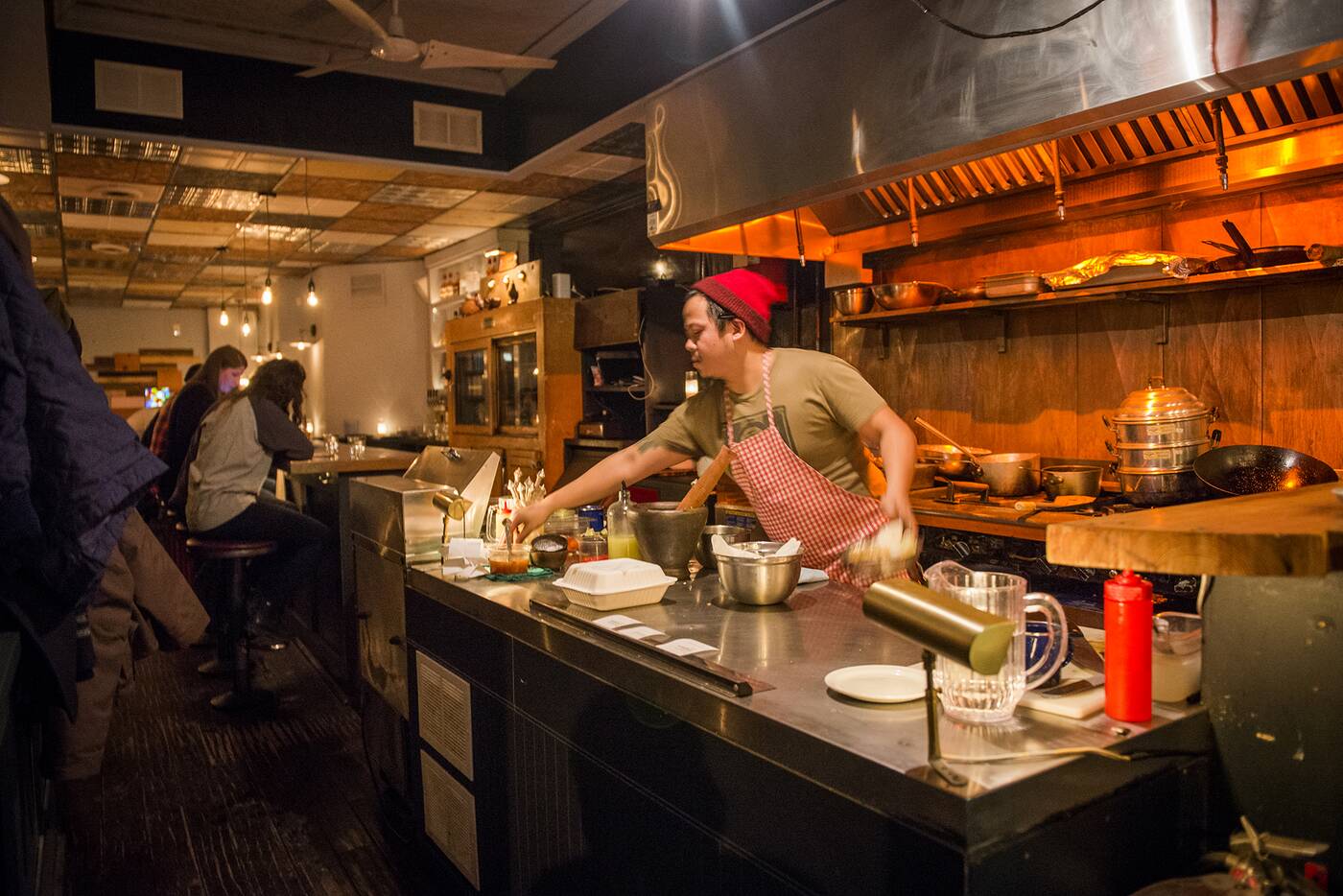 Inside, the pungent scent of fish sauce is everywhere. Chef/co-owner Mike Tan who previously plied his trade at Oddseoul, The Contender and a bunch of other local spots can usually be found in the open kitchen right by the front door.

A collaboration between Tan, restaurateur Alex SenGupta and bar manager Meaghan Murray, this 40-seat, dinette-style space has an experienced team behind it. 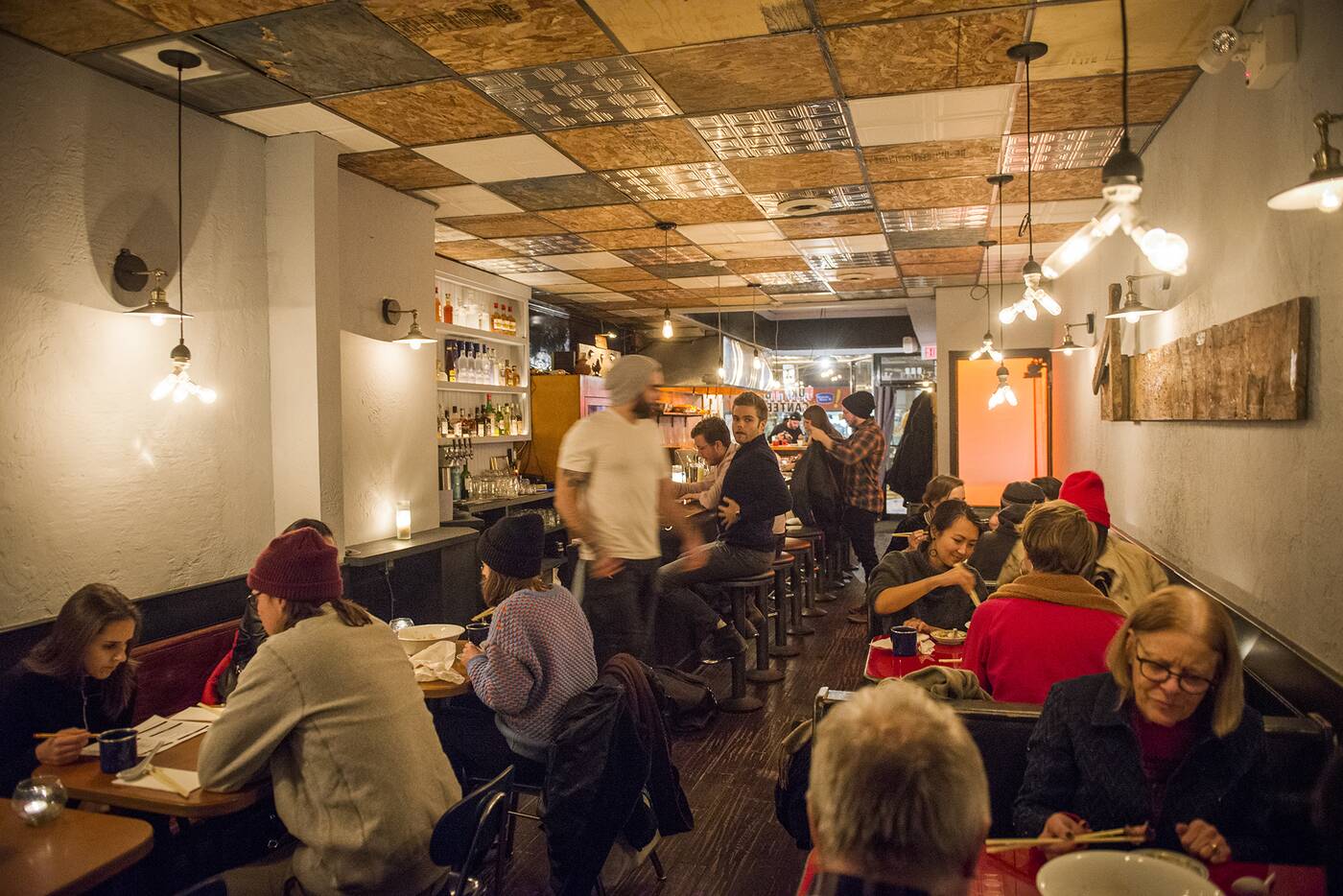 Food here is influenced by Tan's mother's Cambodian cooking and the flavours he grew up eating.

There's no wine on the menu, but there are four beers on tap ($7.75-$8.50), comprising a Collective Arts gose, Czechvar Czech Lager, a pineapple IPA from Mill Street and a peach cider from Brickworks. 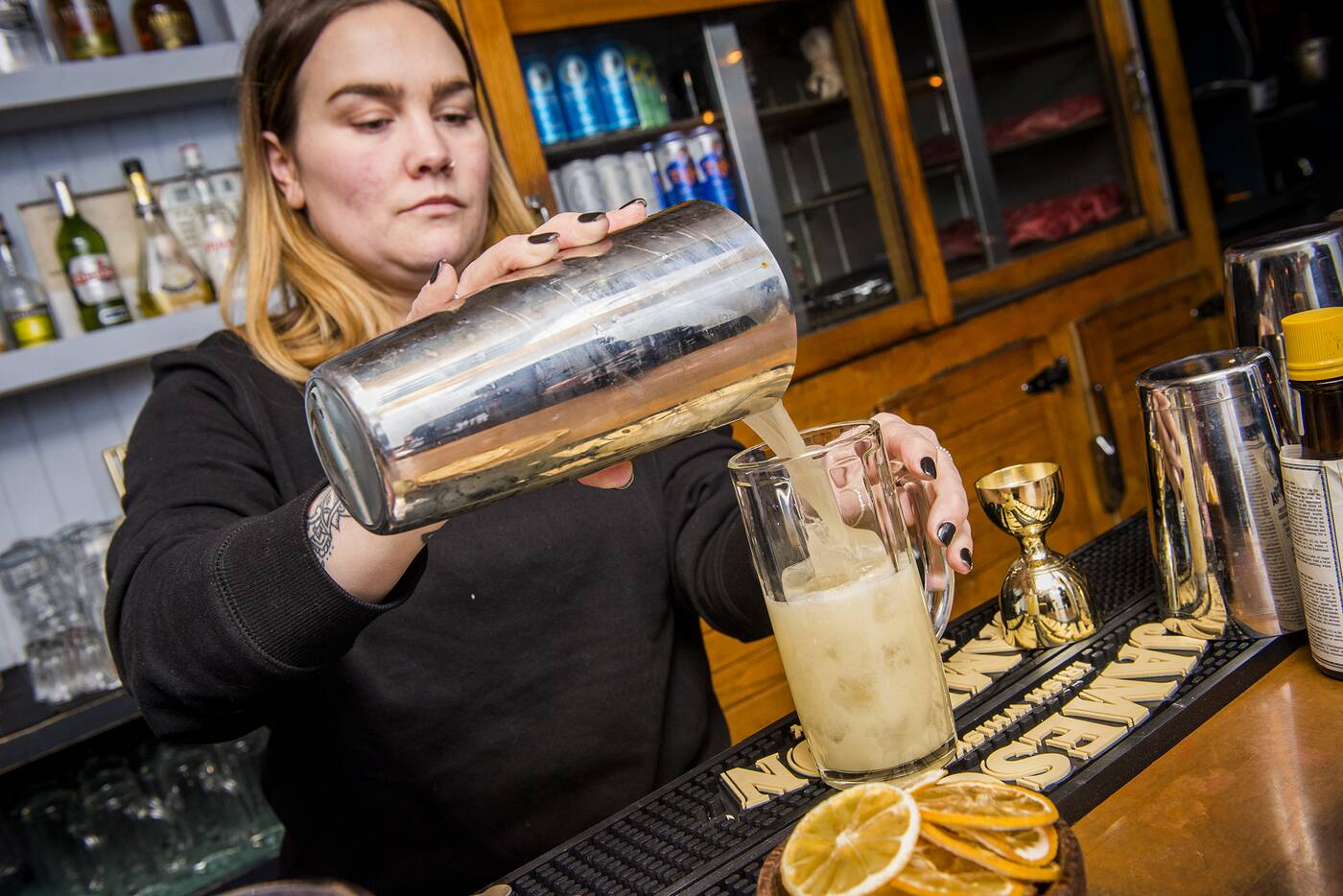 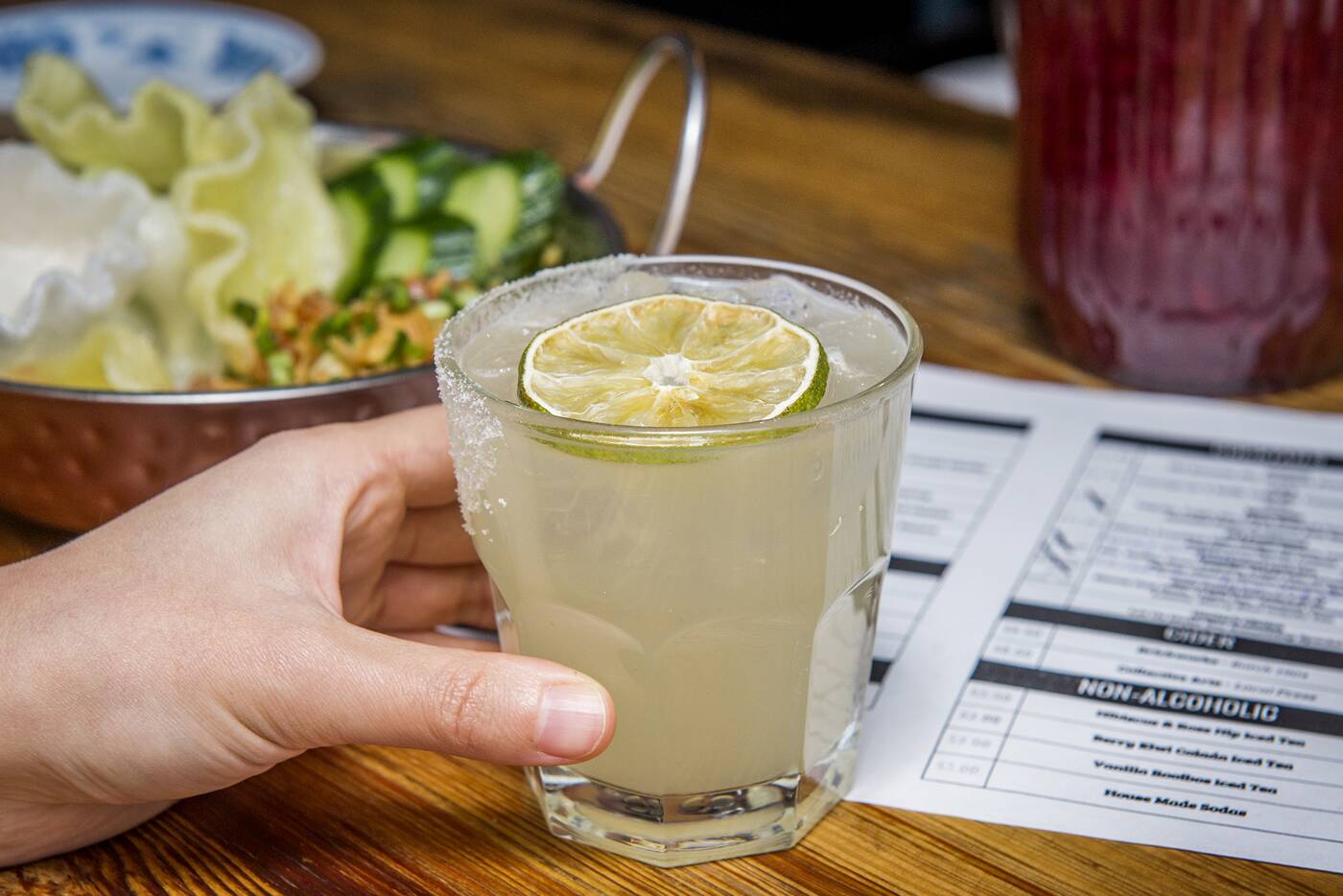 A Margarita ($13) contains the requisite tequila, Triple Sec and lime, along with an interesting twist of toasted coconut syrup, plus an artful coconut-sugar-and-coarse-salt smudge on the rim. 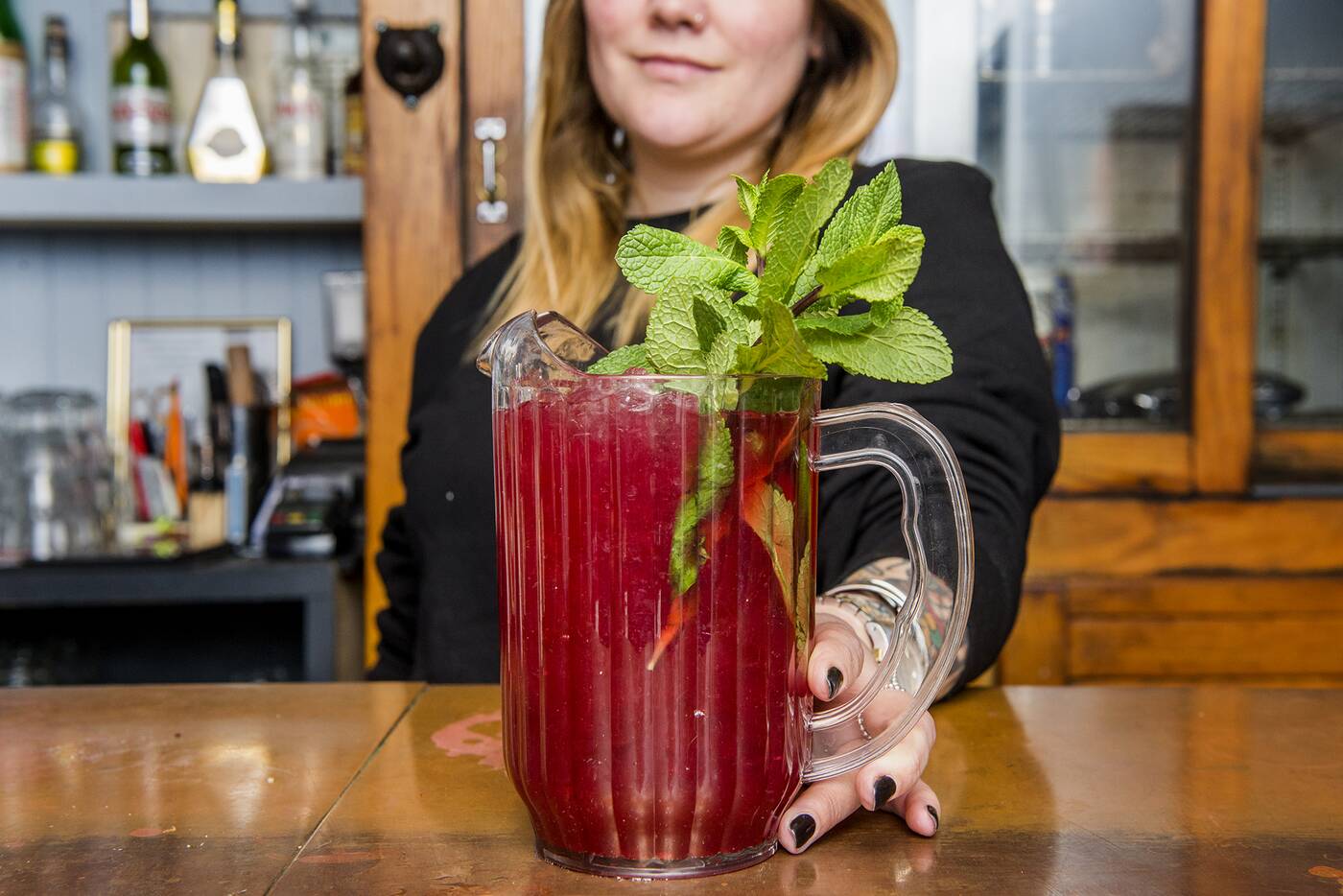 For a shareable boozy beverage, there's the Rum Punch ($18 for two people, $35 for four), which tastes like those "fruit punch"-flavoured drinks I had as a kid, but spiked with Mount Gay rum and Triple Sec to acknowledge my adulthood. 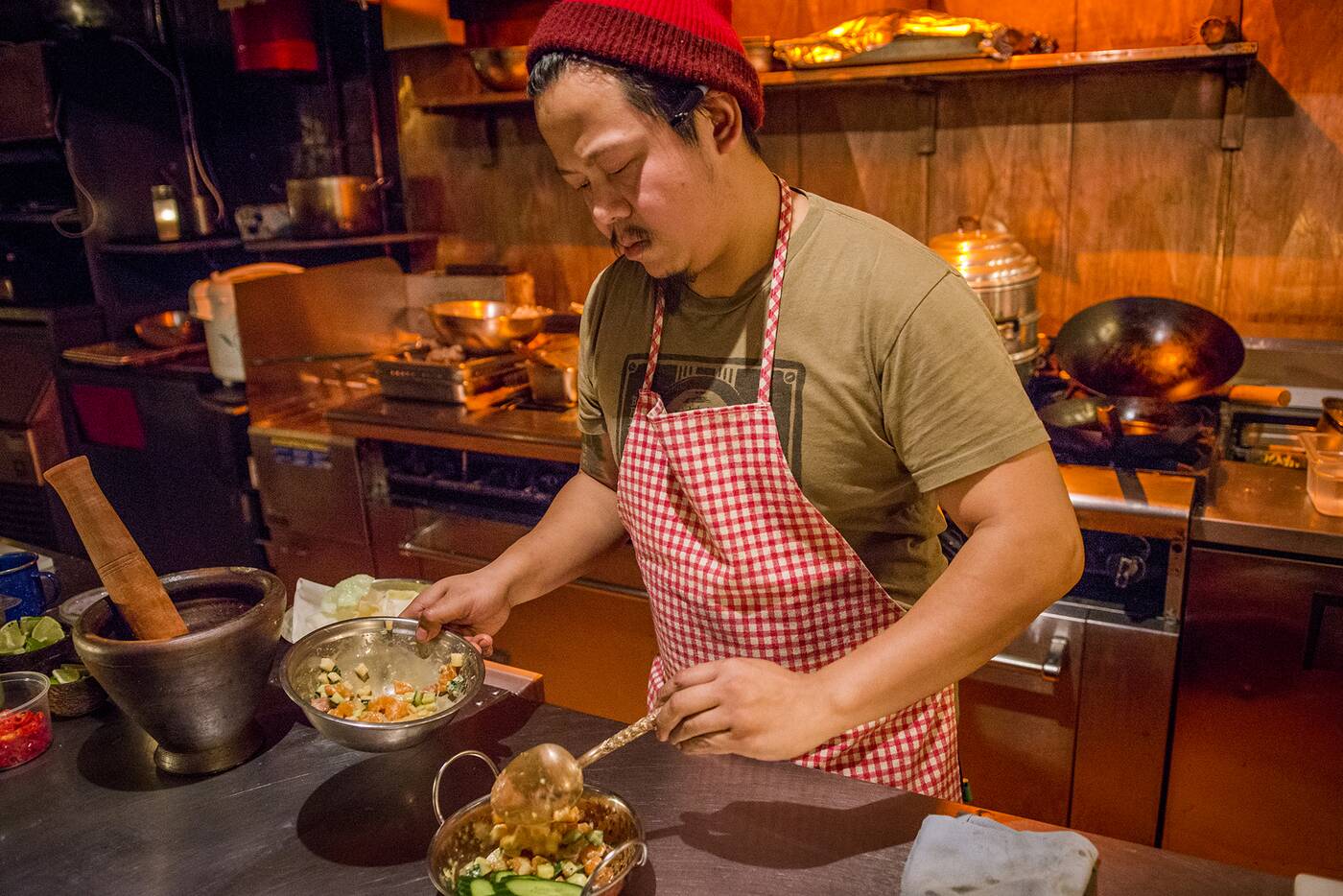 To place an order, the concise list of shareable dishes can be ticked off like a dim-sum menu.

I'd recommend sitting at the "chef's table" seats right up at the front if possible, to get an up-close view of the kitchen action, as it's exciting to watch Tan use his mortar and pestle, steamer or wok to prepare the food. 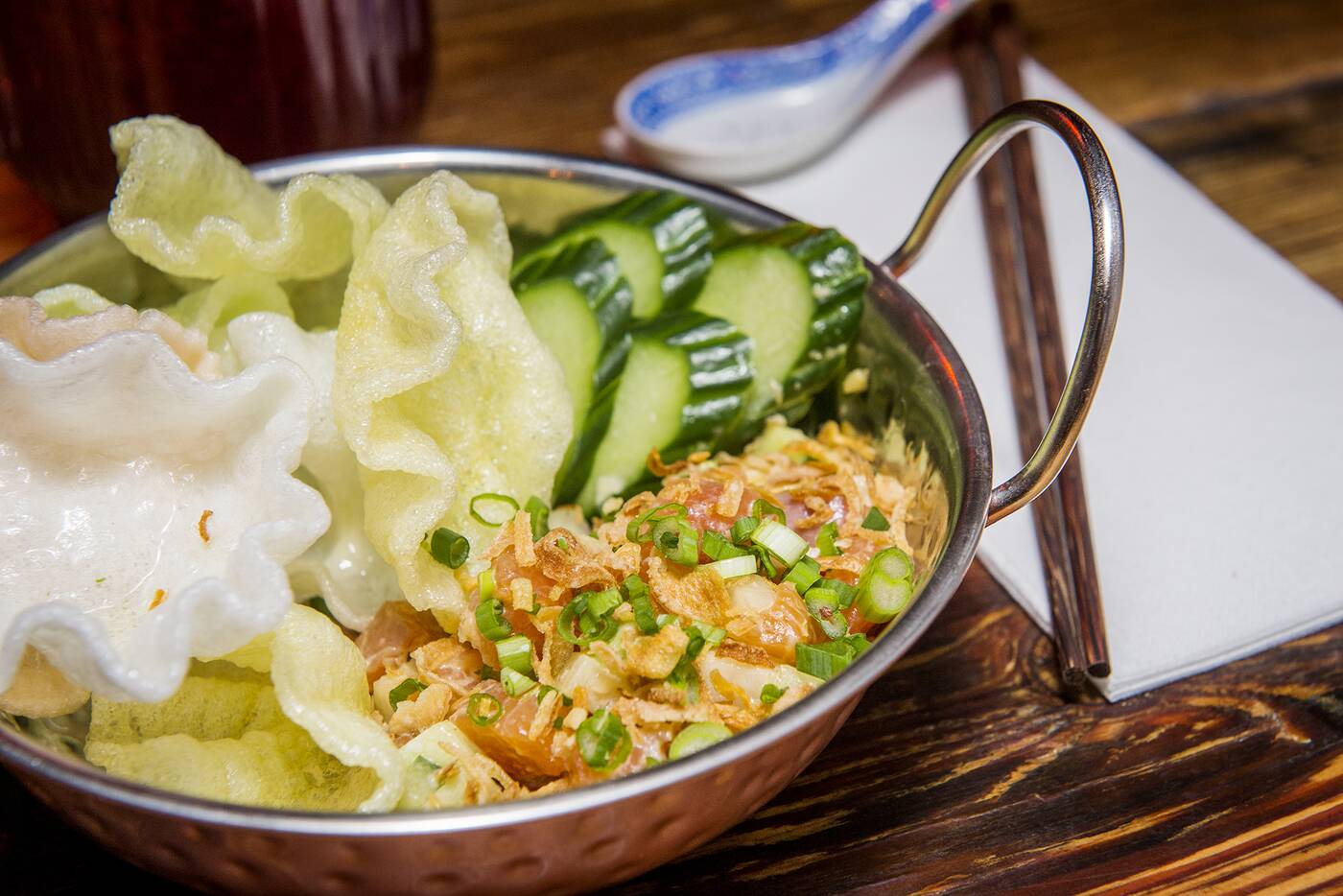 The prawn crackers are the perfect vehicle for picking up the flavourful pieces of salmon, and it's a creative Asian interpretation of this classic. 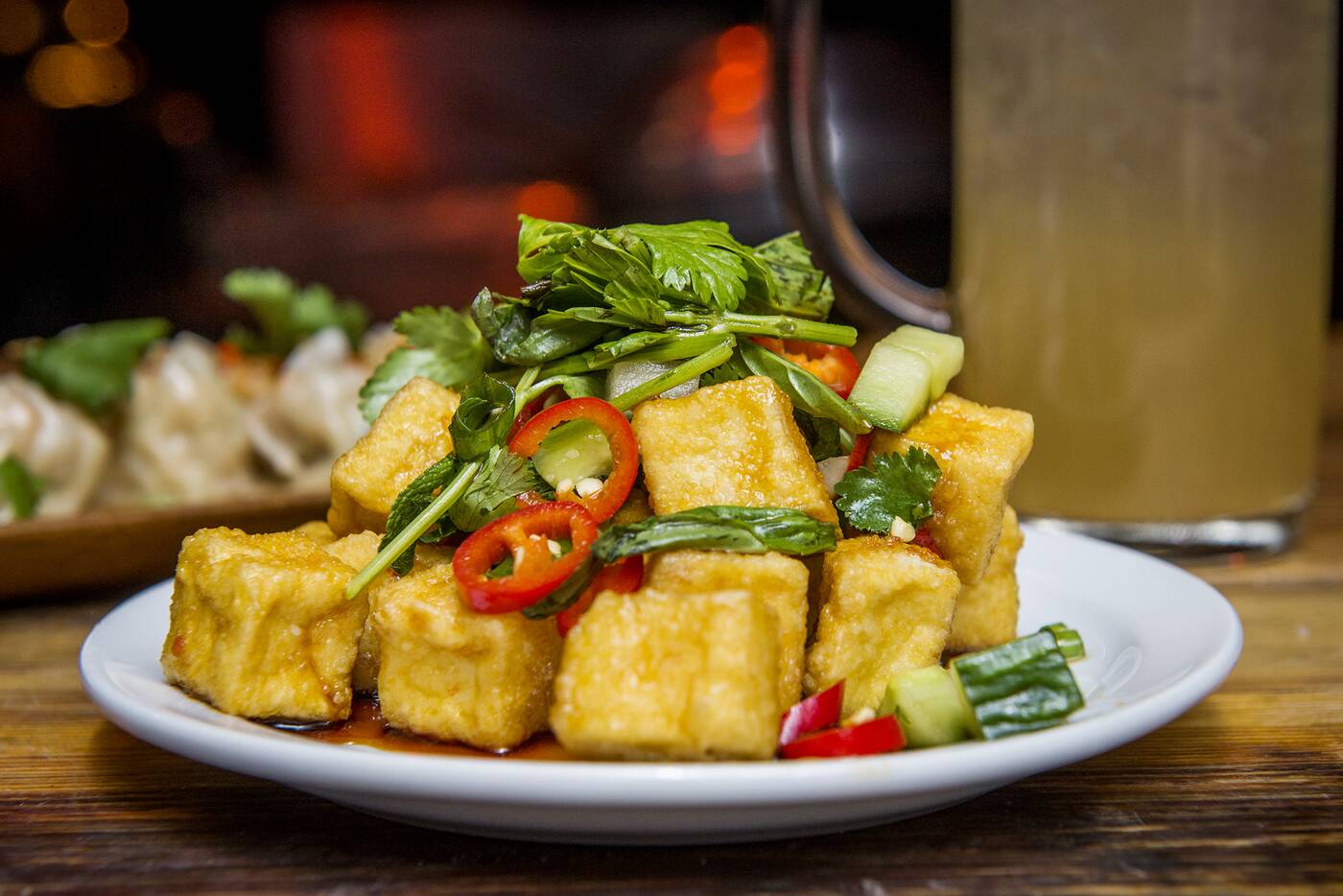 Cubes of marinated crispy tofu ($11) with sweet-chili soy is topped with herbs. They hit all the right notes and textures: salty, sweet, slightly spicy, crisp and soft. The wafting aroma of this is intoxicating and it tastes like something you'd eat at a street stall in Asia. 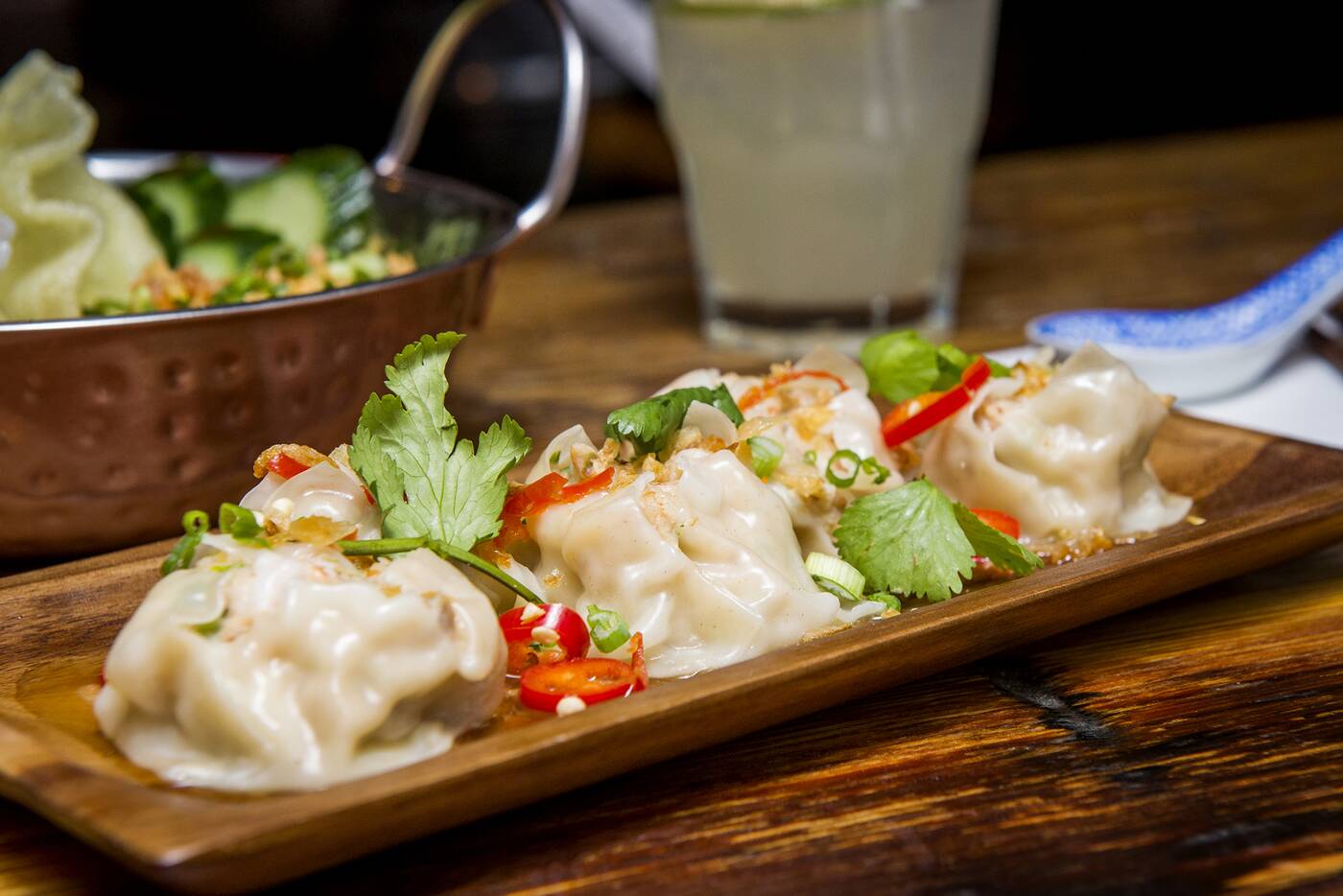 Make sure to order the steamed siu mai of crab, shrimp and green peppercorn ($16) with garlic fish sauce.

The crab and shrimp meat are mixed with green peppercorn and Cambodian kreung (a fragrant house-made paste of lemongrass, galangal, lime leaf, ginger, garlic and turmeric) before they're wrapped, steamed and covered with sweet and spicy garlic fish sauce. 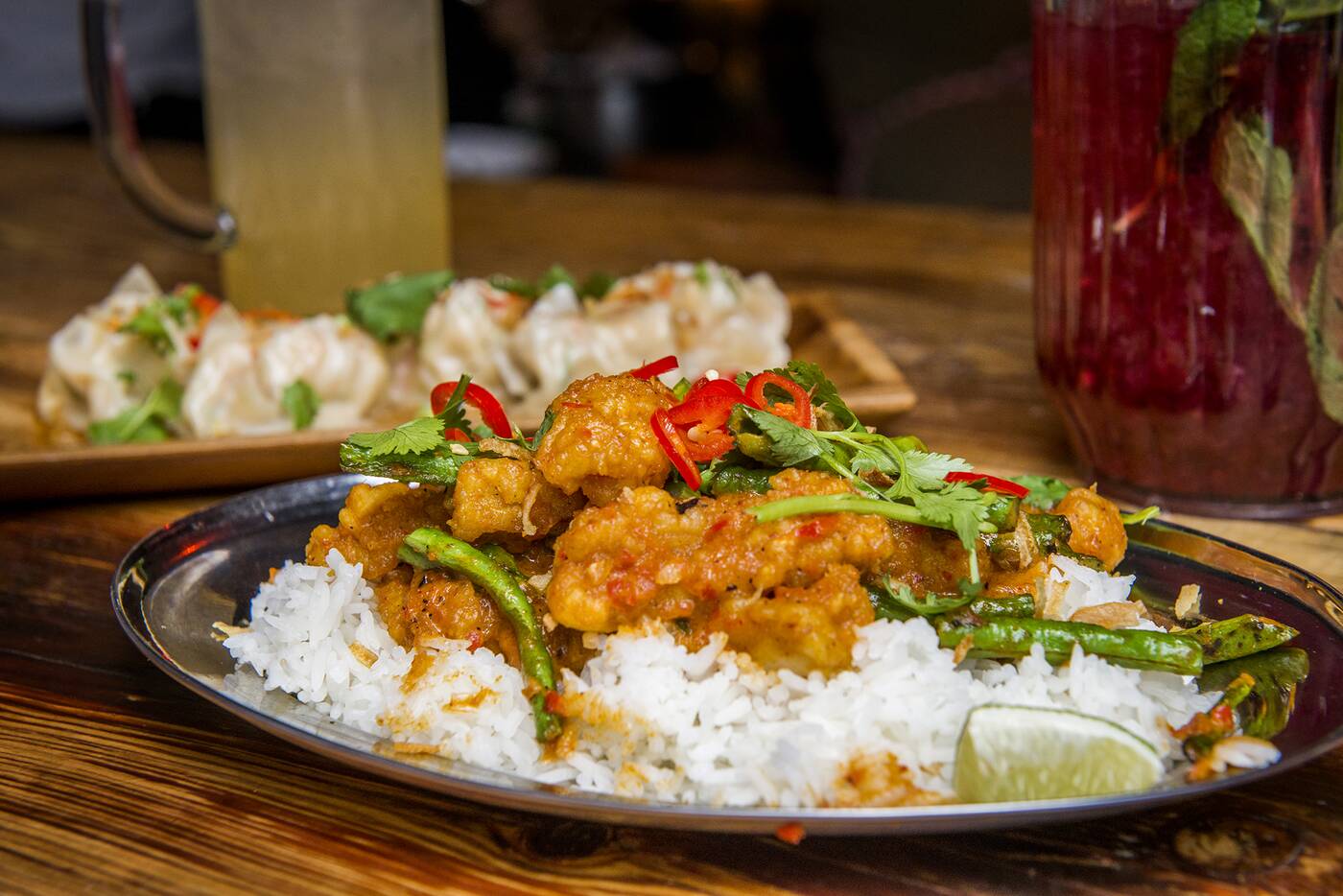 While the food here isn't exactly traditional Cambodian food, much of it still carries the flavours and spirit of the cuisine, and most importantly, everything tastes good. 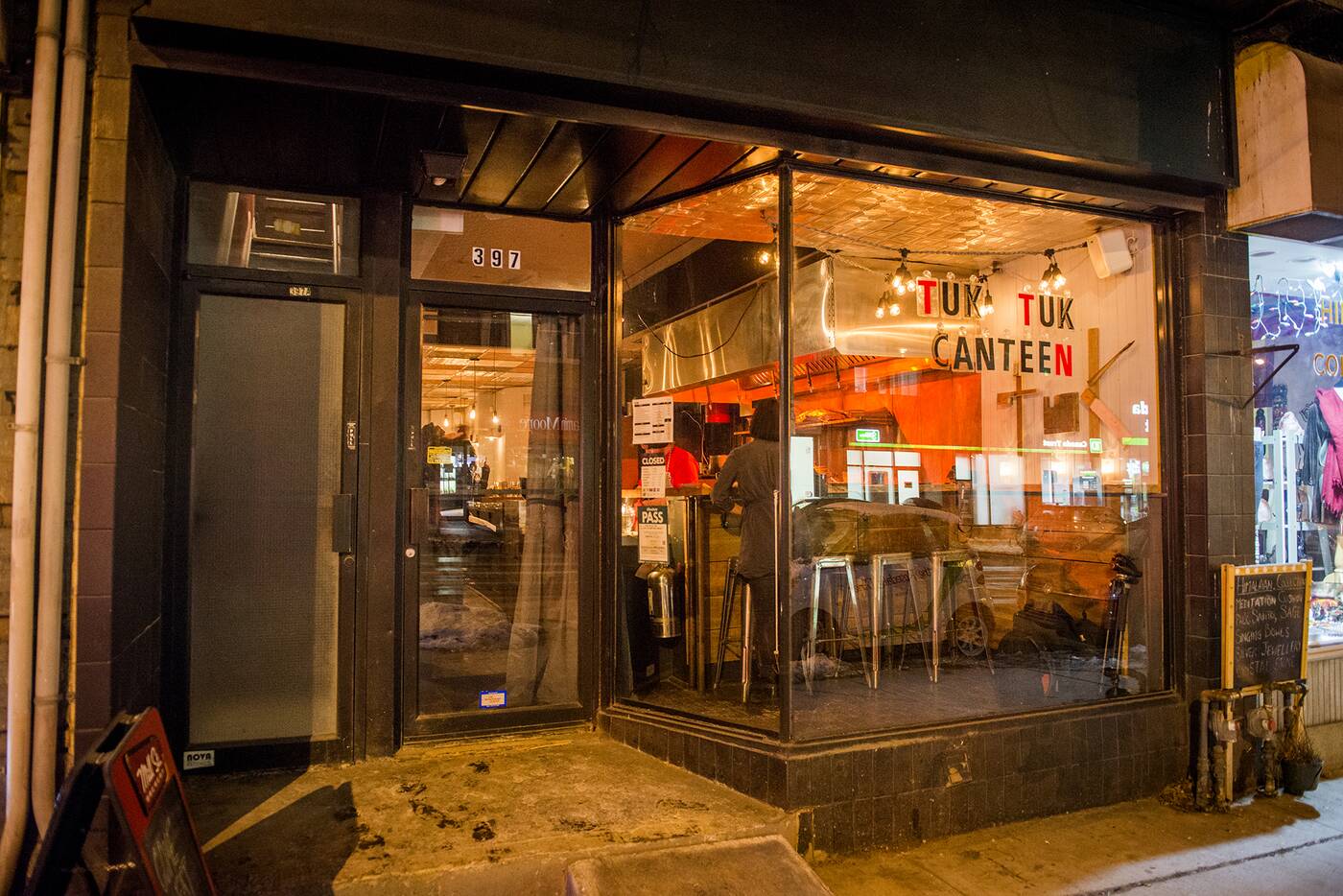