This End Up, sandwiched between sports cafes and a whole lotta businesses that start with "Brasil", is the latest restaurant to open up on the stretch of Dundas West that is Little Portugal joining the likes of the Federal Reserve and Midfield Wine Bar . Open now for just over a week, part owner Karen Young says they're still in their soft opening, but when I stopped in last weekend - save for the lighting - there was nothing soft about it. 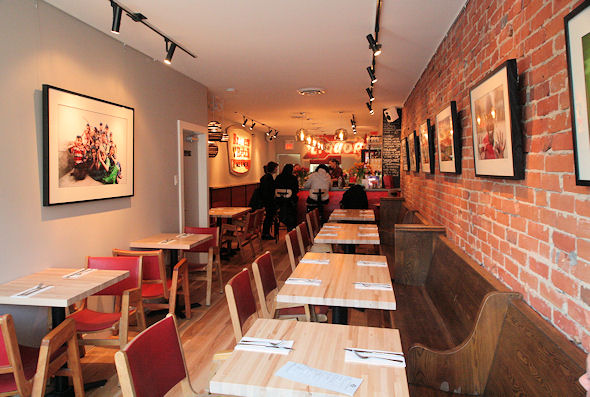 Occupying the spot that was once a restaurant aptly named Kilo Buffet , Young and her partner have transformed the space, with the only surviving remnant of its previous incarnation being the vertical signage outside proclaiming its identity as a restaurant. Inside, church pews against exposed brick serve as seating, and lighting is provided by Edison bulbs and vintage electric signs advertising Liquor! and the Brewers Retail. 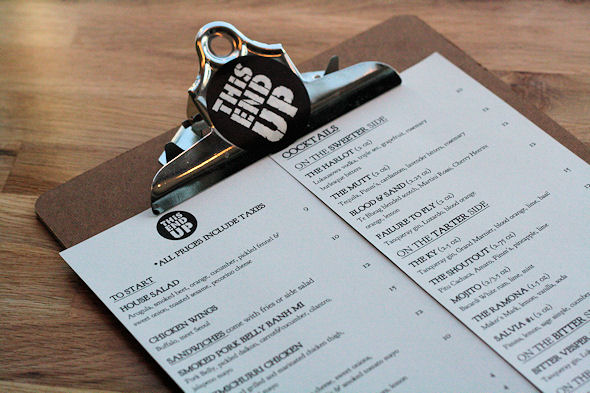 As of our visit the menu was on the small side, but Young promised more items to come as they settle in. Not that a small menu is anything to be docked points for, as it is well thought out with a few sandwiches and a burger on offer, as well as a salad, wings, and intriguing starters (aka Nibbles) like Frito Pie and Pickles & Sticks. Their cocktail menu is nowhere near lacking, and is nicely organized into the categories of sweeter, tarter, bitter, spicier and bubblier, so those about to imbibe know what they're getting into. 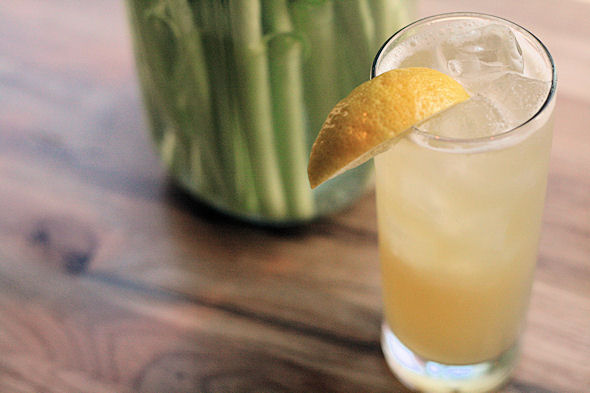 Speaking of cocktails, I started with The Ramona ($12) from the tarter selection while my girlfriend went with a something a little sweeter, this being The Mutt (also $12). I've been on a bit of a bourbon kick lately, so the Ramona with its Makers Mark, lemon, vanilla and soda hit the spot. It was definitely pucker-inducing, but very refreshing - front porch on a rocking chair in the deep South kind of refreshing - at the same time. 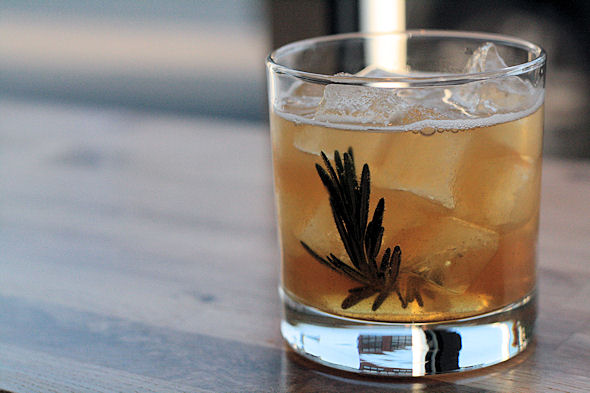 The Mutt (tequila, Pimm's, cardamom, lavender, bitters and rosemary) was a little herbal for my liking, and we tasted sage over rosemary which may have served more as a garnish than anything else. Nevertheless my girlfriend enjoyed it and said it would be a repeat offender given the chance. 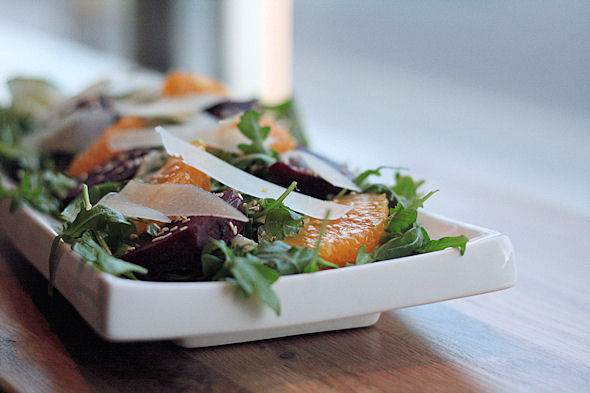 Halfway through our drinks, the food arrived. The House Salad ($9) composed of arugula, smoked beets, orange, cucumber, pickled fennel, sweet onion, toasted sesame, and shaved pecorino made for a very striking presentation. I'm not crazy about beets (they always taste a bit, for lack of a better adjective...dusty) but I really enjoyed the smokiness of these ones as it defined their flavour. All of the different flavours and textures complemented each other and overall it was just an incredibly fresh salad. 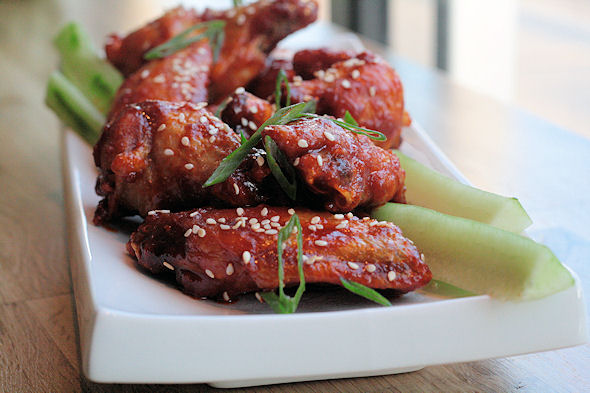 The wings ($10) described as "Seoul meets Buffalo" might be their signature dish. Made with gochujang, a soy and chili based Korean condiment, Buffalo wing sauce, and sprinkled with sesame seeds, they were a little bit sweet but with a spicy kick. The wings themselves were a decent size, and with around ten of them on the plate, the price is right.

Already a bit full at this point we halved the vegetarian sandwich and split the generous portion of shoestring fries it came with. Made with marinated & spiced chickpeas, and topped with black olives, parsley, pickled cucumber and smoked tomato sauce it was good enough to convert a staunch meat-eater at a table nearby (I wasn't eavesdropping...his voice carried...), and the pickled cucumber was an amazing touch.

The fries didn't look like much, but wow were they tasty. With some crispy, and some a bit mushy (in the best of ways) with just the right amount of salt, and served with smoked ketchup, they were probably the best fries I've had in a long time. 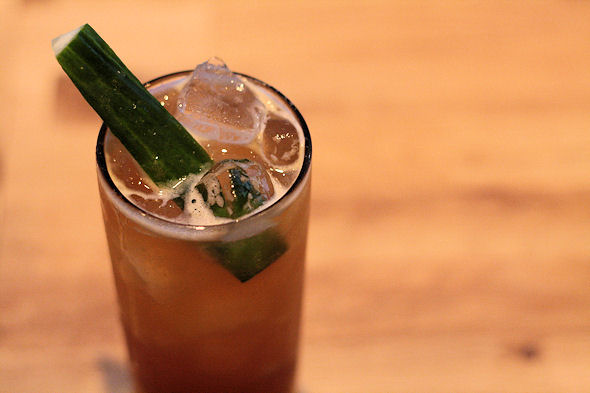 We finished the night, not with dessert (baked by OMG ) but with another cocktail of course. Salvia #1($10) hailed from the tarter side and it was our favourite of the three. Made with Pimm's (yes, more Pimm's), lemon, sage simple and cucumber soda, it was a bit sweeter than The Ramona, but still tart enough to be listed as such. 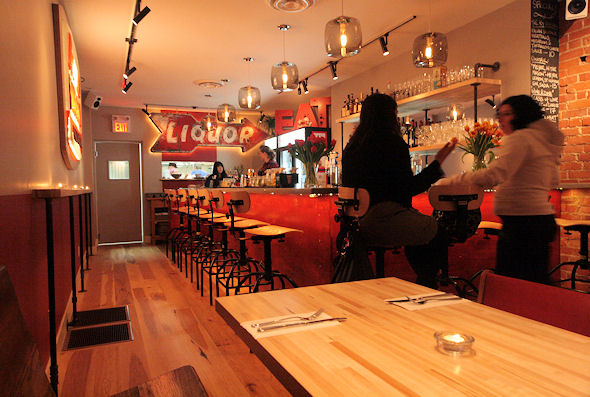 This would have been a definite do-over for me, but as the drinks were on par with, or higher than the food prices, it would be the last for the evening. I love the trend toward more complex cocktails these days , but hate that I can't always afford them. 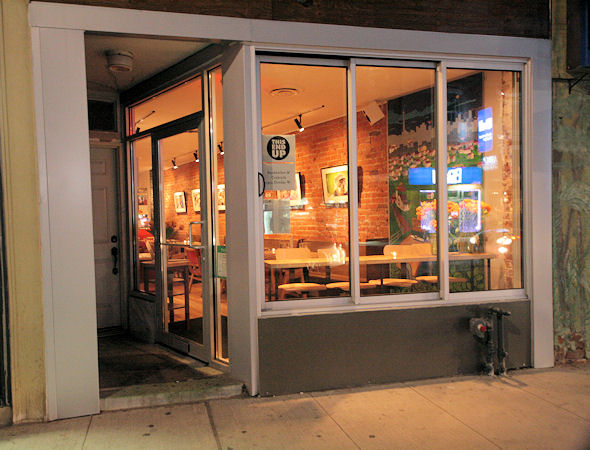 With its laid back atmosphere, and genuinely friendly service, I for one will end up back here again...after all, partaking in delicious food and cocktails while sitting on a church pew is just about the closest thing to a religious experience I'll ever have.