Tea-N-Bannock has been serving Indigenous food for close to a decade, already outlasting several others on a similar mission including Pow Wow Cafe, NishDish and Ku-kum.

This spot for Aboriginal dishes like fry bread, fresh-caught fish, bison and Navajo Indian tacos opened on the edge of Little India near Gerrard and Greenwood back in 2012. 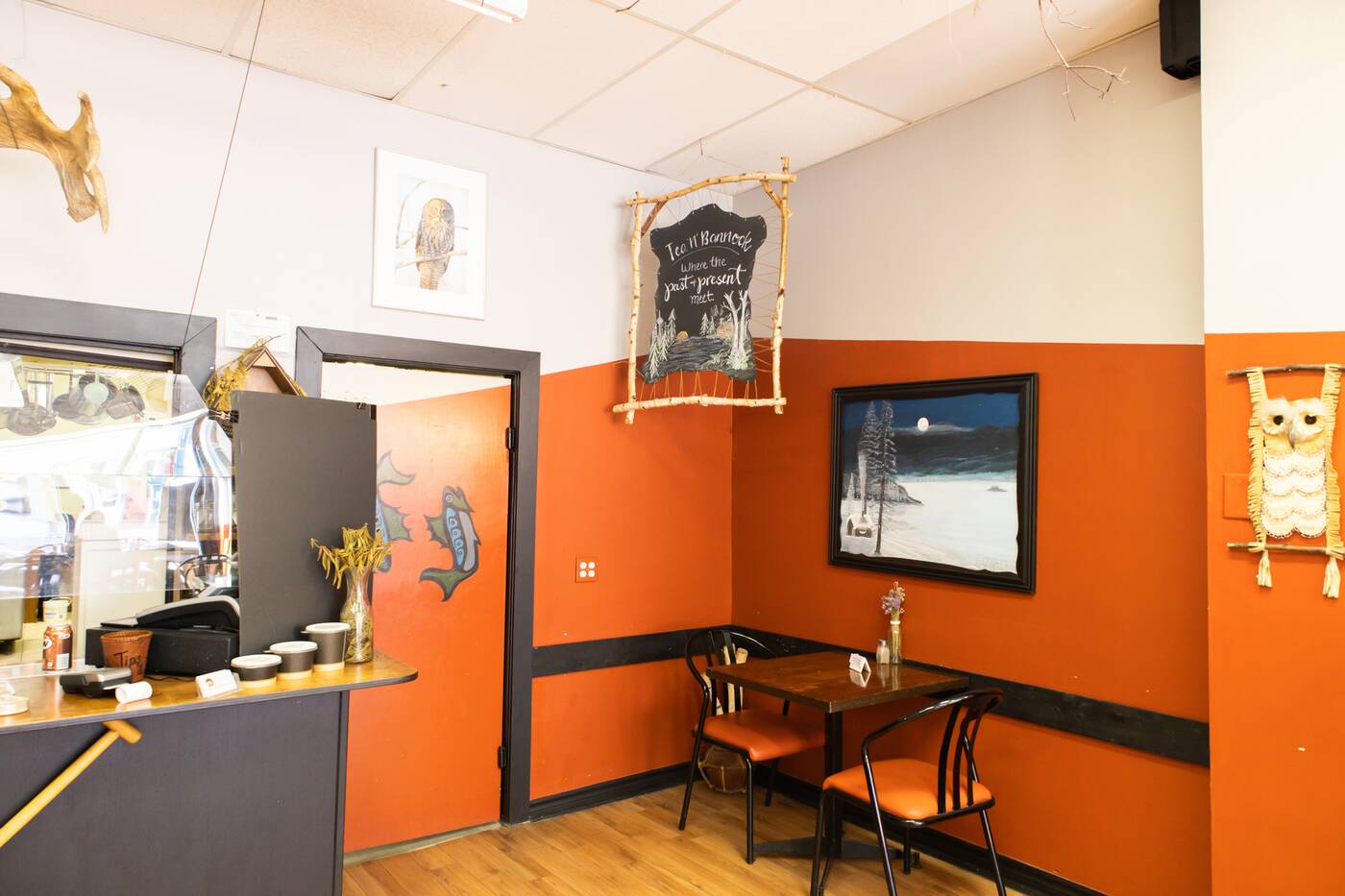 Although pretty minimal, anyone's first entry into the dining room is sure to be welcoming – no matter if you're in search of a homecooked meal to remind you of home or it's your first time trying Indigenous food. 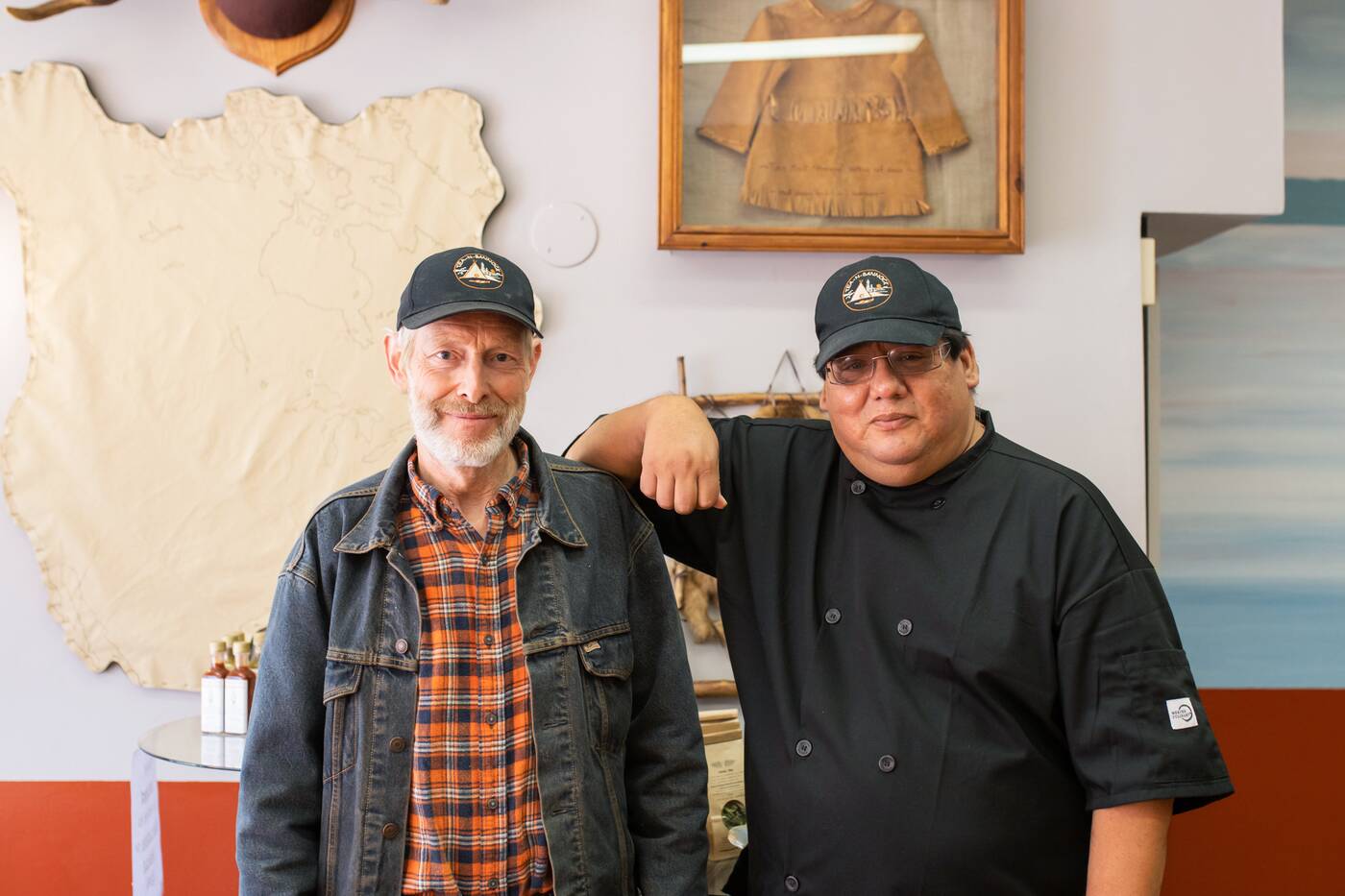 Born in Southampton part of the Saugeen Nation, Norton has been cooking since 1989 and is trained in French and Italian cuisine. He got his start at a five-star resort in northern Ontario as a breakfast cook. 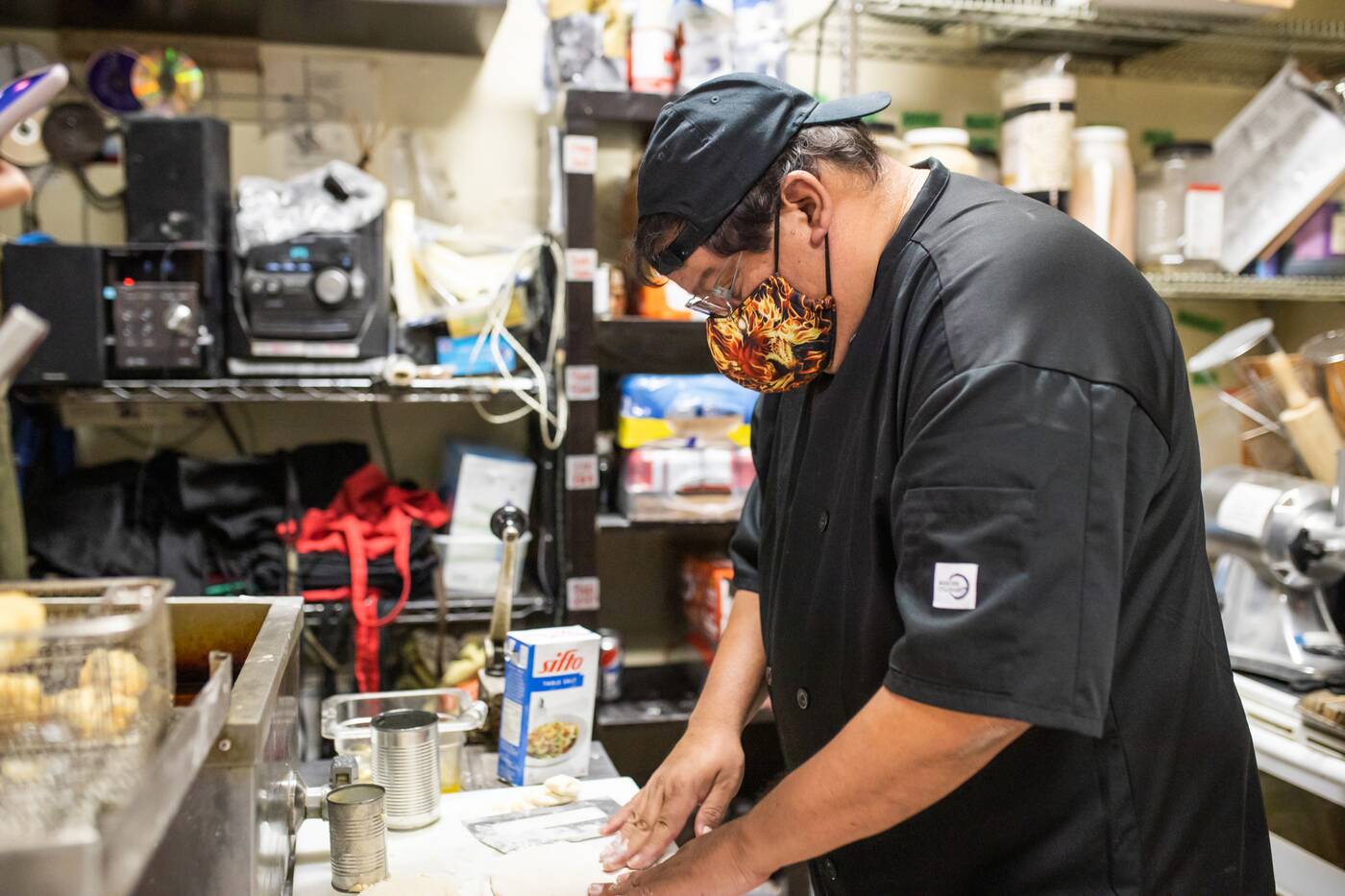 First Nations food is pretty new to the 30-year chef, however. He was part of the '60s Scoop, a period from the 1950s to the 1980s that saw thousands of Indigenous children taken from their homes to be adopted by white families.

A visit to Tea-N-Bannock for a bison burger two years back changed that when a simple dinner quickly turned into his latest kitchen gig. 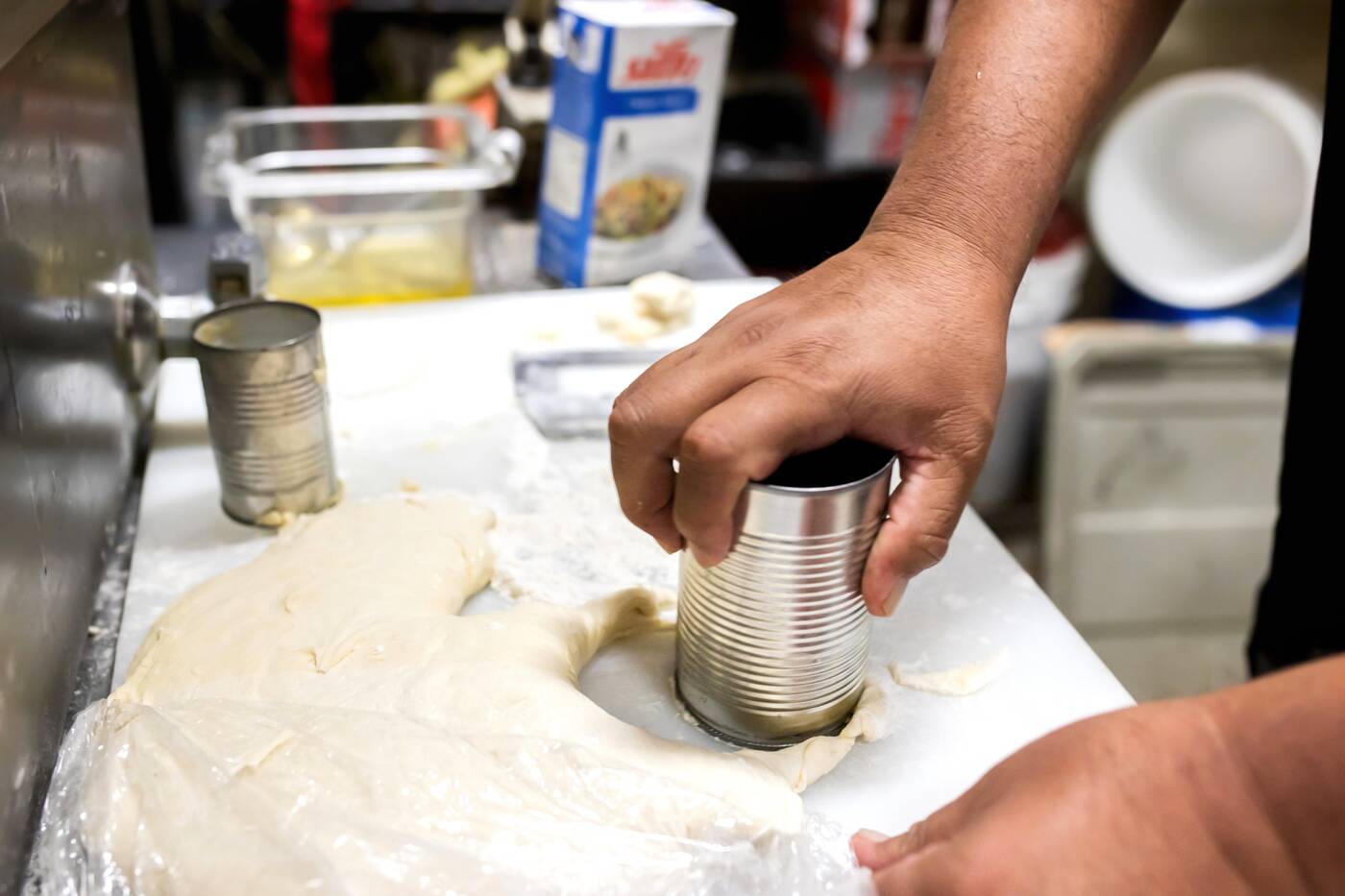 As the name suggests, bannock is an important part of the menu here. The traditional bread is made simply with wheat flour, baking powder, salt and water, and comes baked or fried. 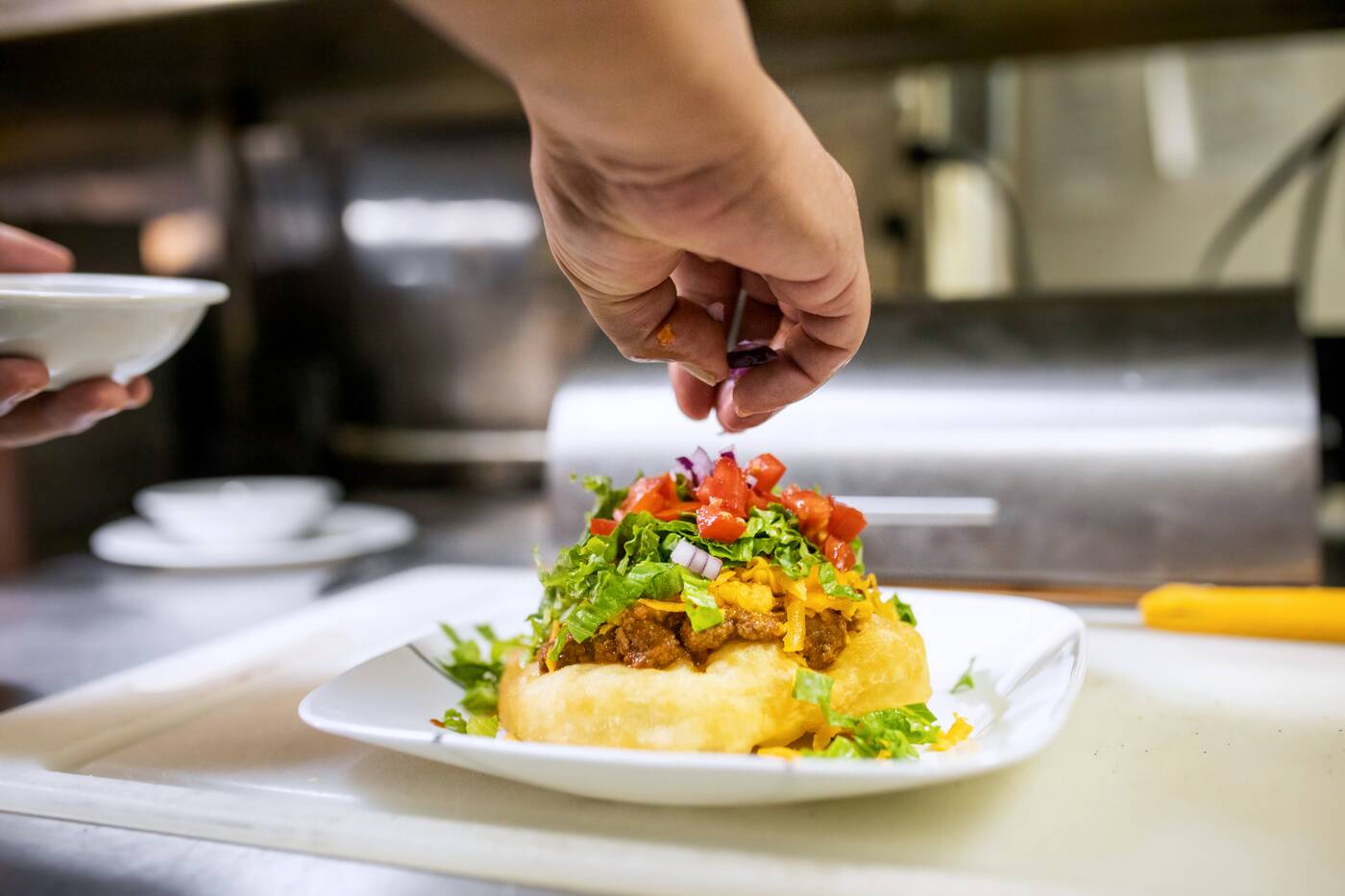 Fry bread is used as the fluffy foundation for the Navajo taco, which was first introduced in the 1960s by the Navajo people – one of the largest tribes of Native Americans in Arizona, New Mexico and Utah. 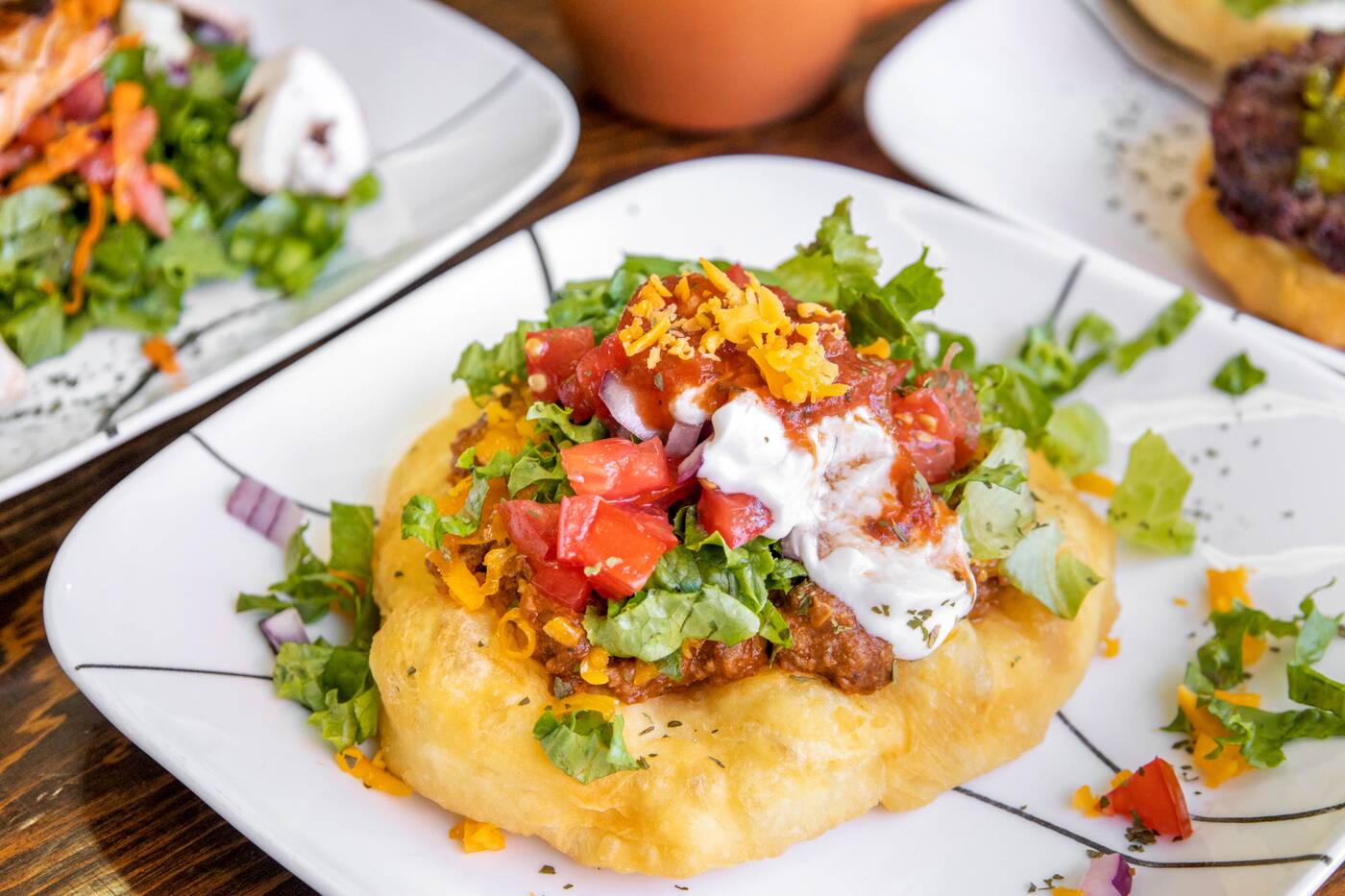 I'm impressed by the size of the small taco ($8, large: $12) that comes piled with chili-like ground beef, tomatoes, lettuce, onion, cheese, sour cream and salsa. There's also an option to get it without meat. 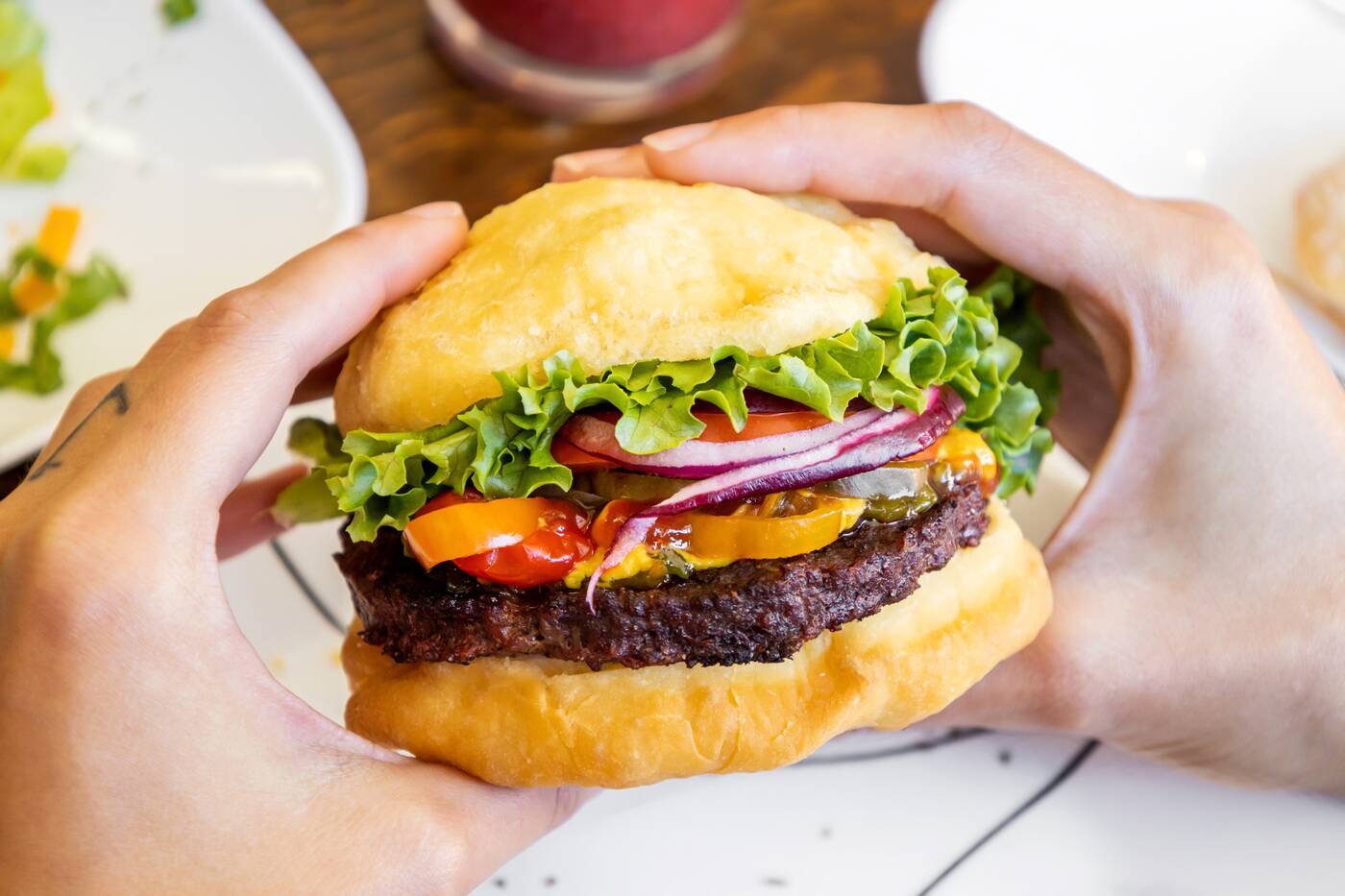 Another popular food, here and on the Pow Wow Trail, is the bison burger ($12). The Alberta bison is much leaner than beef with no gamey taste to it at all. Bannock is used as the bun while lettuce, onion, tomatoes and hot peppers add some extra dressing. 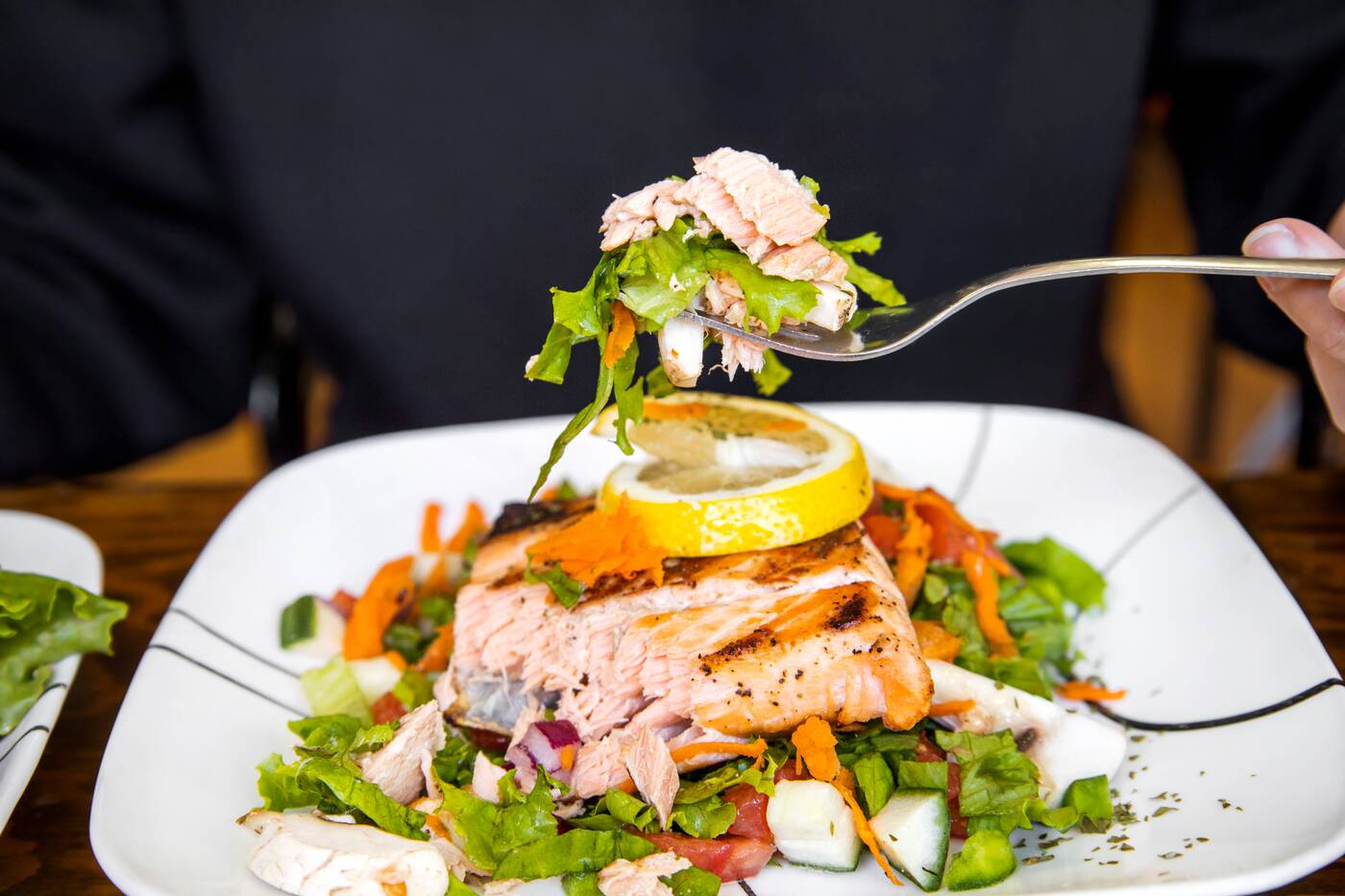 Also on the menu is plenty of Canadian-sourced fish including wild-caught arctic char from Nunavut and pickerel from Indigenous communities along the northern lakes.

The salmon ($19) is lightly smoked and served with your choice between salad or a side like wild rice from Manitoba. 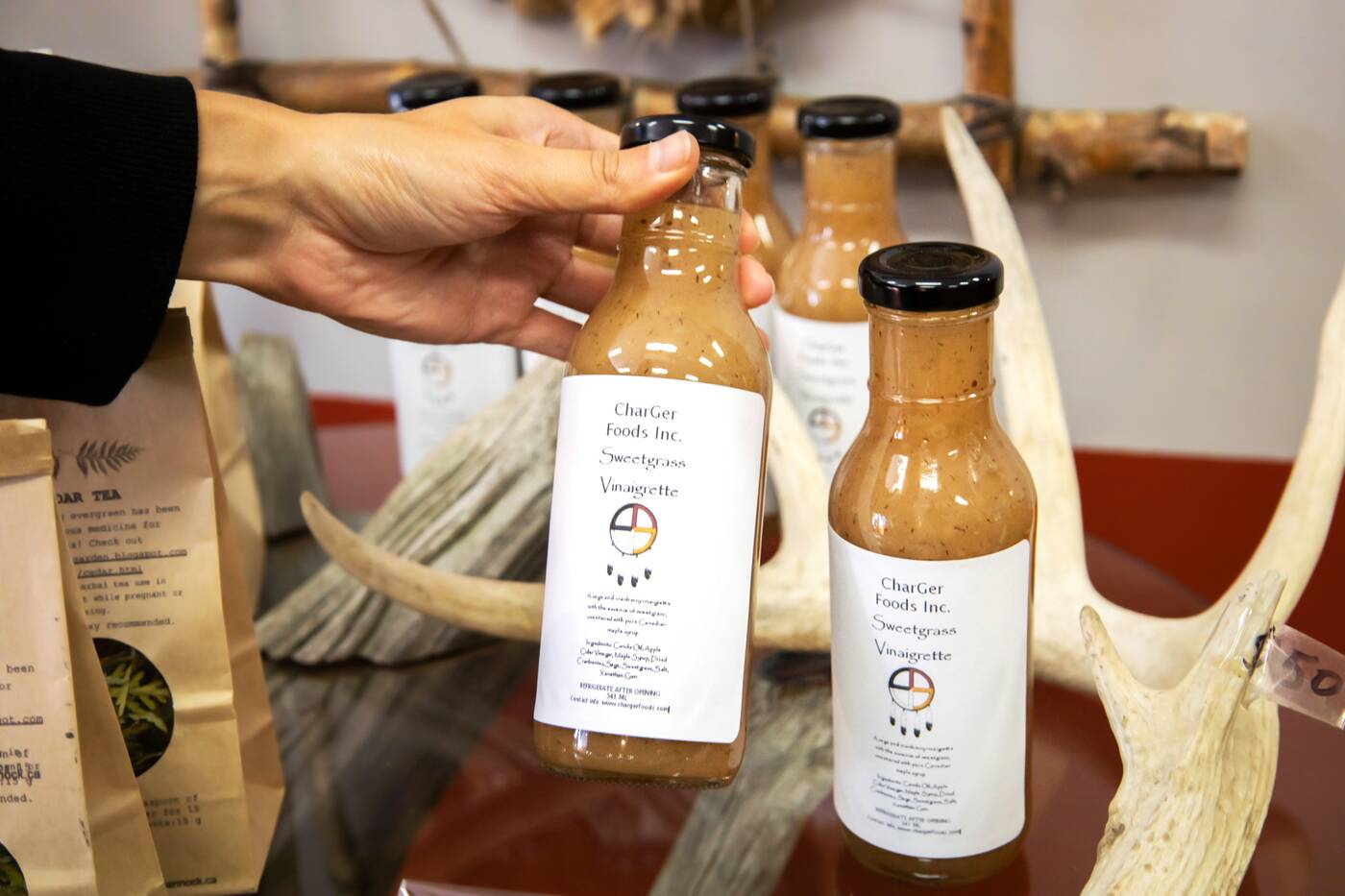 The sweetgrass vinaigrette for the salad is made by Charles Catchpole, an Anishinaabe chef and member of Couchiching First Nation. Find it available by the bottle at the entrance. 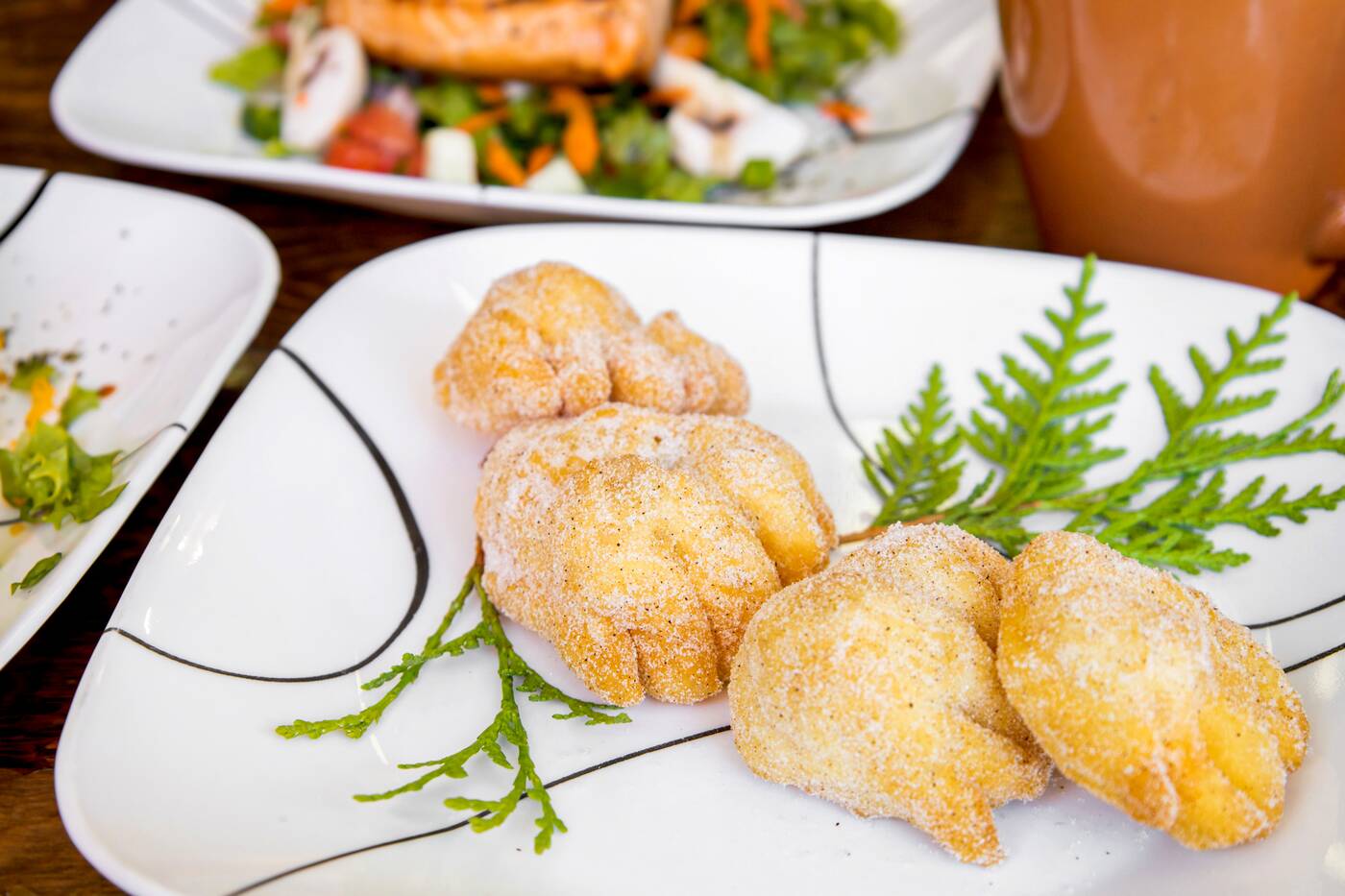 Leave room for dessert and get an order of the bear paws ($3). The fried dough paws are sprinkled in just the right amount of cinnamon and sugar. Pretty similar to BeaverTails, expect a bit of a crunchy outer pastry with fluffy, slightly chewy insides. 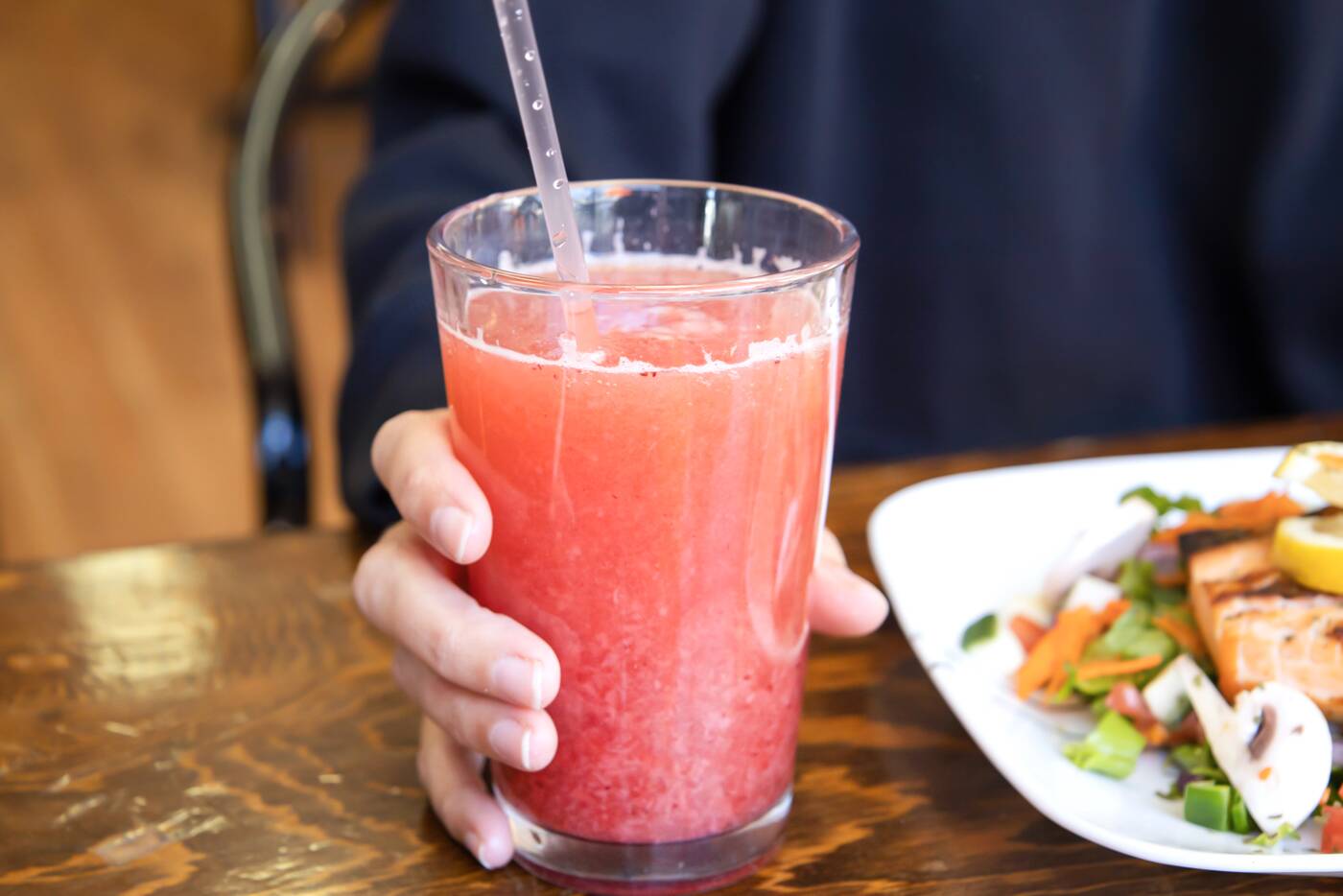 For the strawberry juice ($4), real strawberries are ground in-house into a concentrate and blended with water and sugar. It's super refreshing with a natural fruit taste. 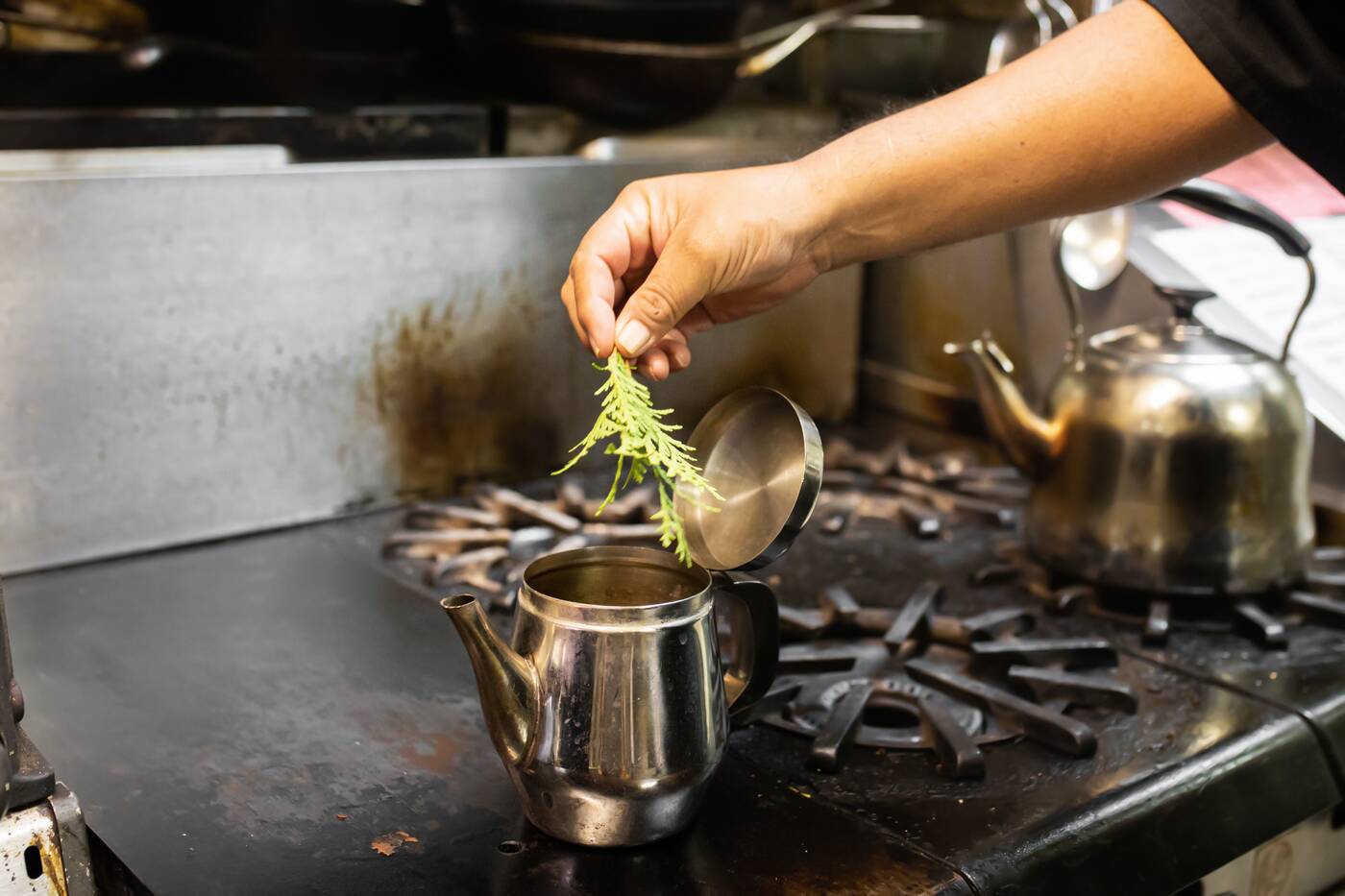 Cedar tea ($1.75) is served with handpicked cedar from northern Ontario. In fact, the pot prepared for us includes simmered branches picked by Miller just last weekend. The comforting drink is used to help treat fevers, chest colds and the flu. 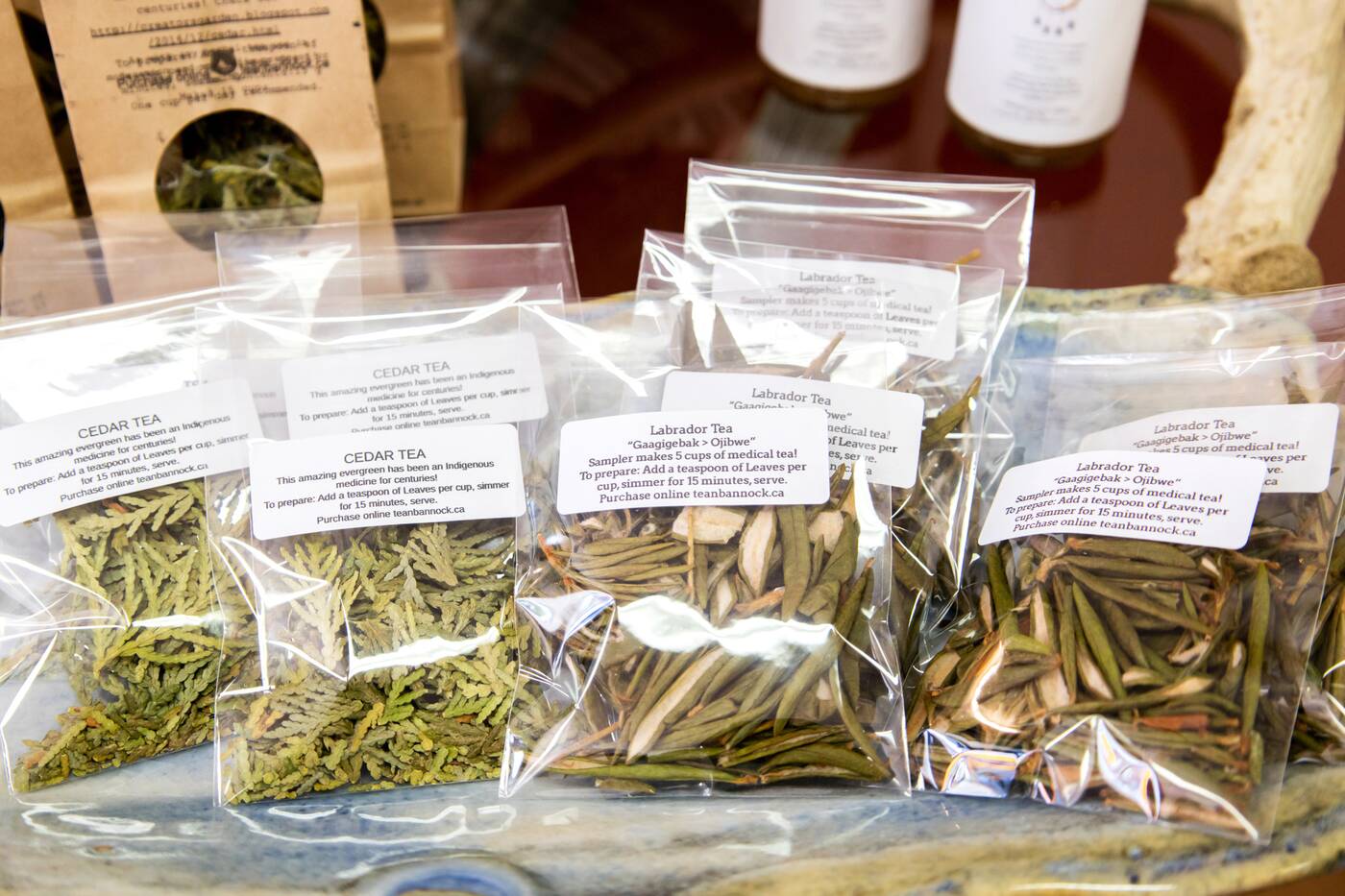 Bags of loose cedar and Labrador tea are also available at the entrance if you're interested in taking some home. 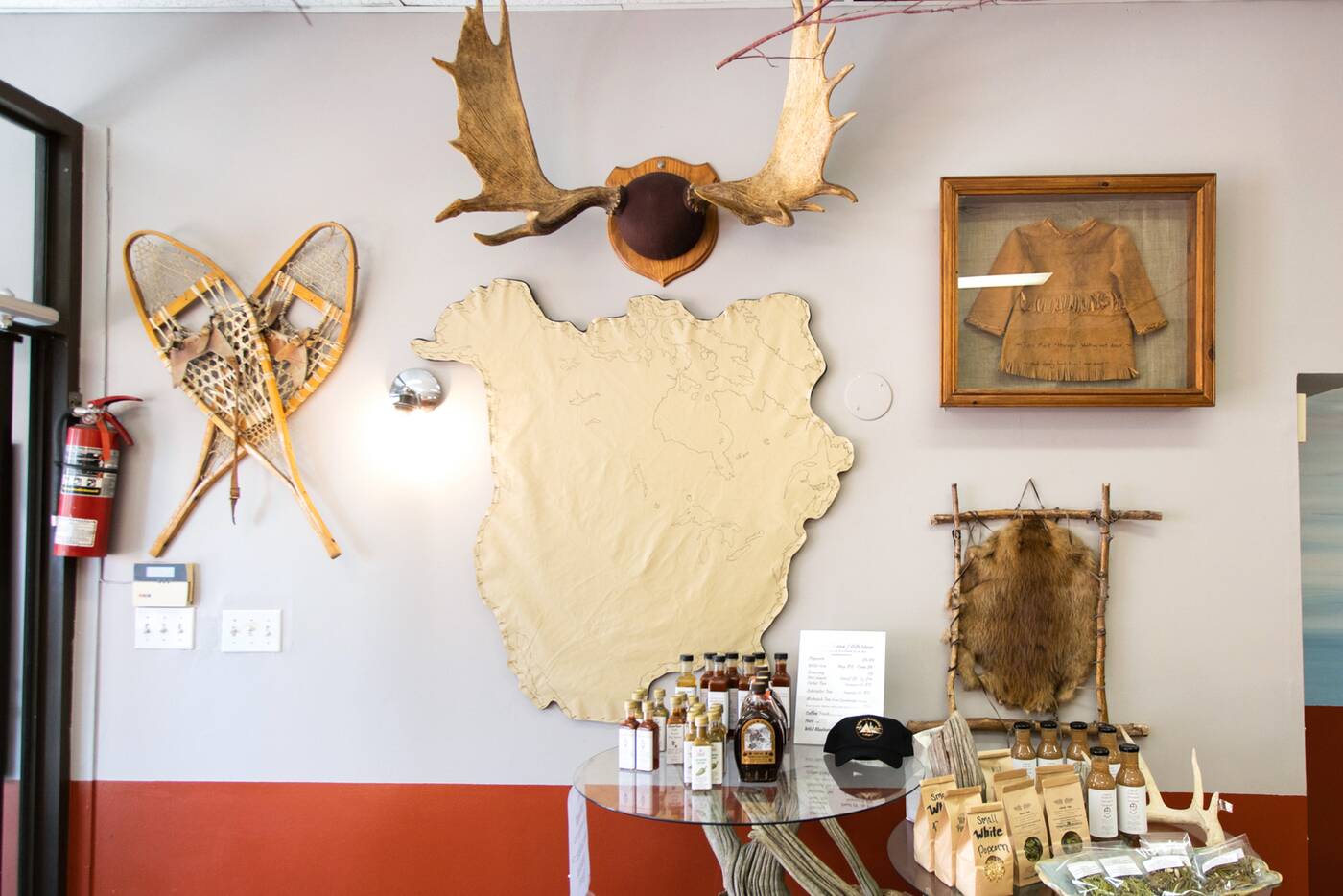 Tea-N-Bannock isn't the spot for those in the market for fast food – you might wait a good 20 minutes for a bison burger. Though no one seems to complain.

With zero hustle or bustle in sight (even on the busiest of nights), it's really a space to sit, relax and chat, ideally over some tea and bannock. 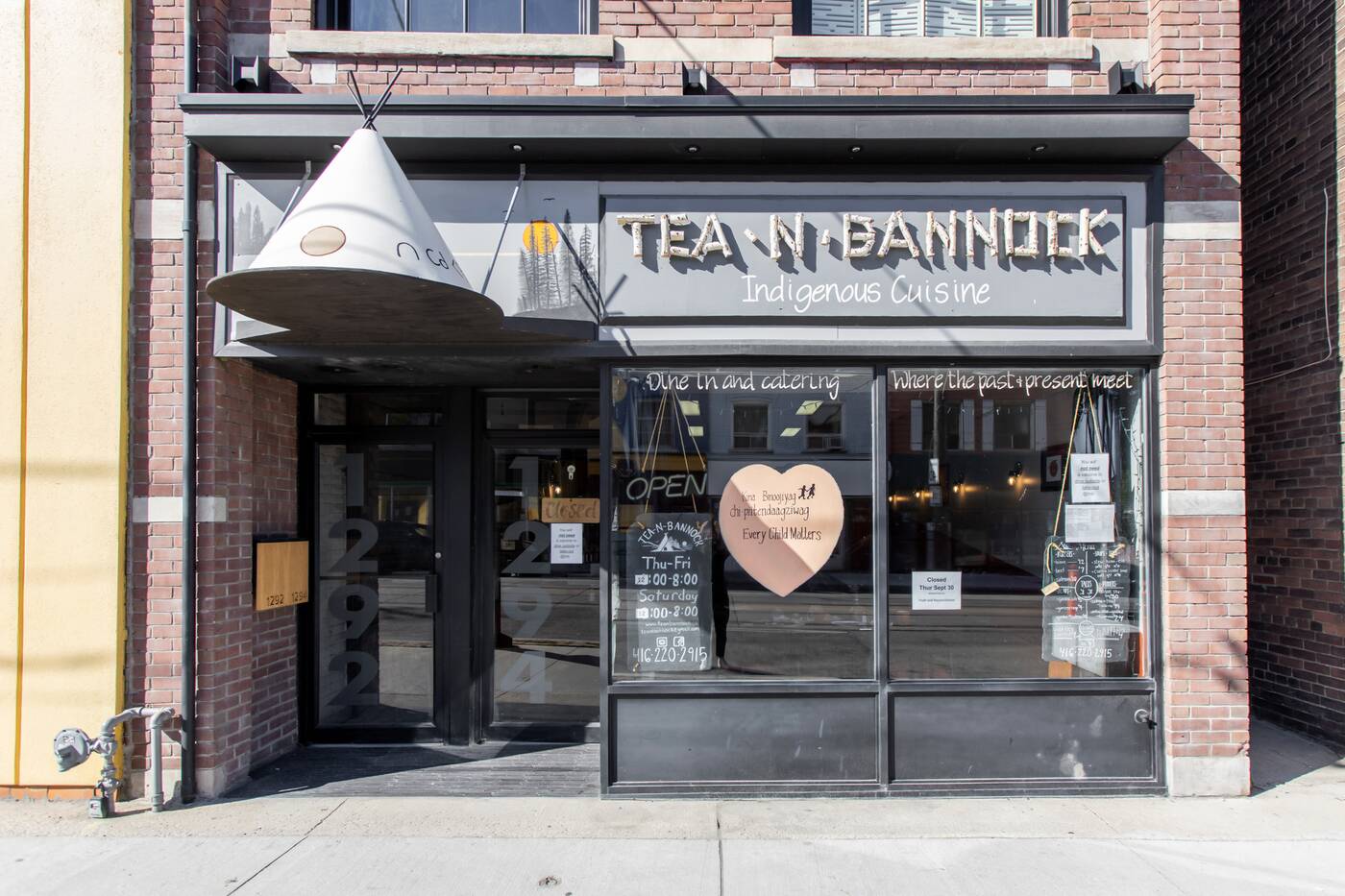