The demand, plus recognition by enRoute's annual best new restaurants list for best takeout gave the team the confidence they needed to consider a second, more relaxed concept. 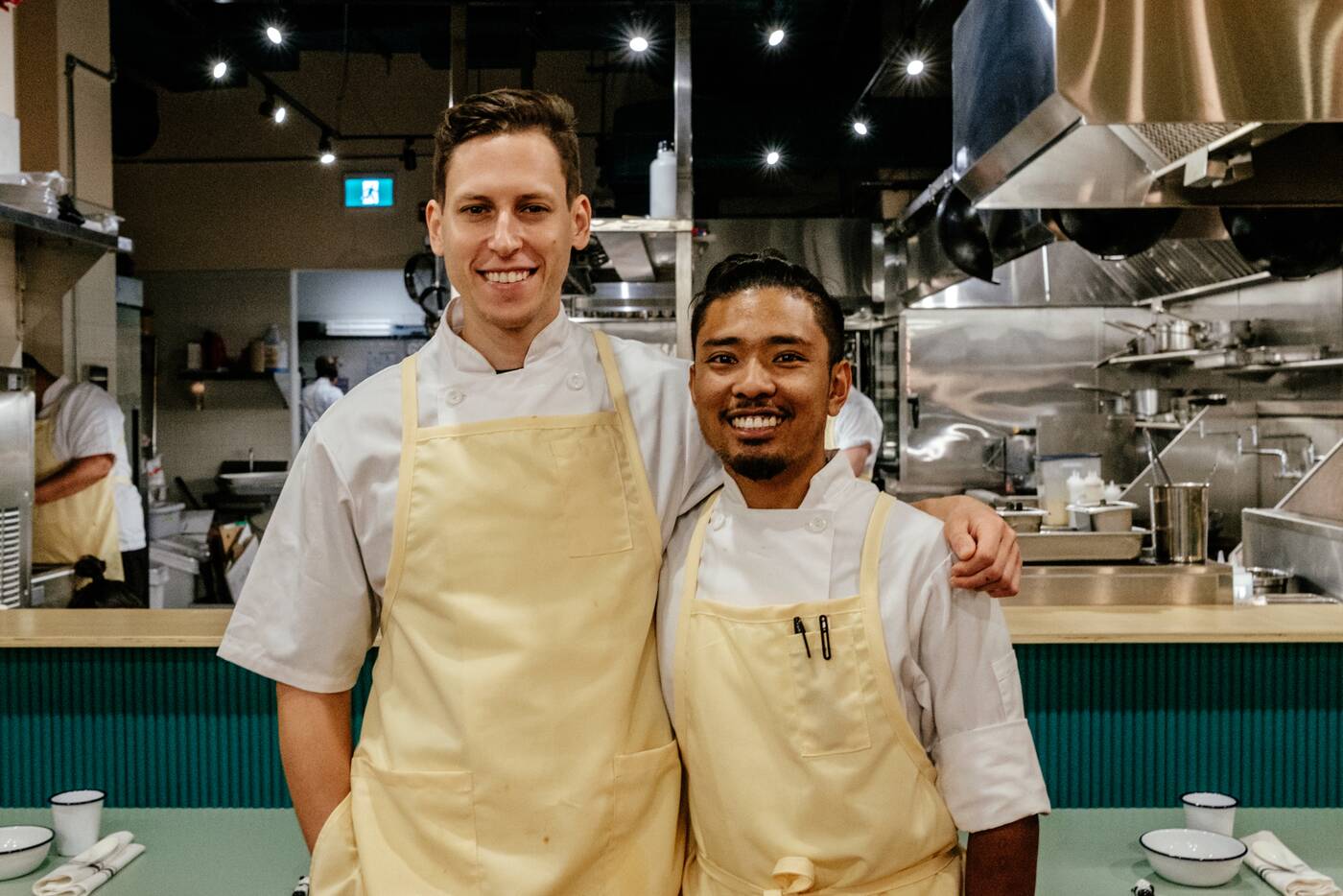 “Sunnys exceeded all expectations,” said Schwartz. “Being sold out for 11 months showed us that there might be something with Sunnys. So, we decided to open a second brick-and-mortar concept where we could cook dishes that we wanted to do that might not work as well at MIMI.”

Sunnys bills itself as the funky downtown cousin to MIMI. The latter is more of an American Cantonese meets American steakhouse experience, whereas Sunnys is what Schwartz describes as home-style food that comes “out of the wok or grill and onto the plate.” 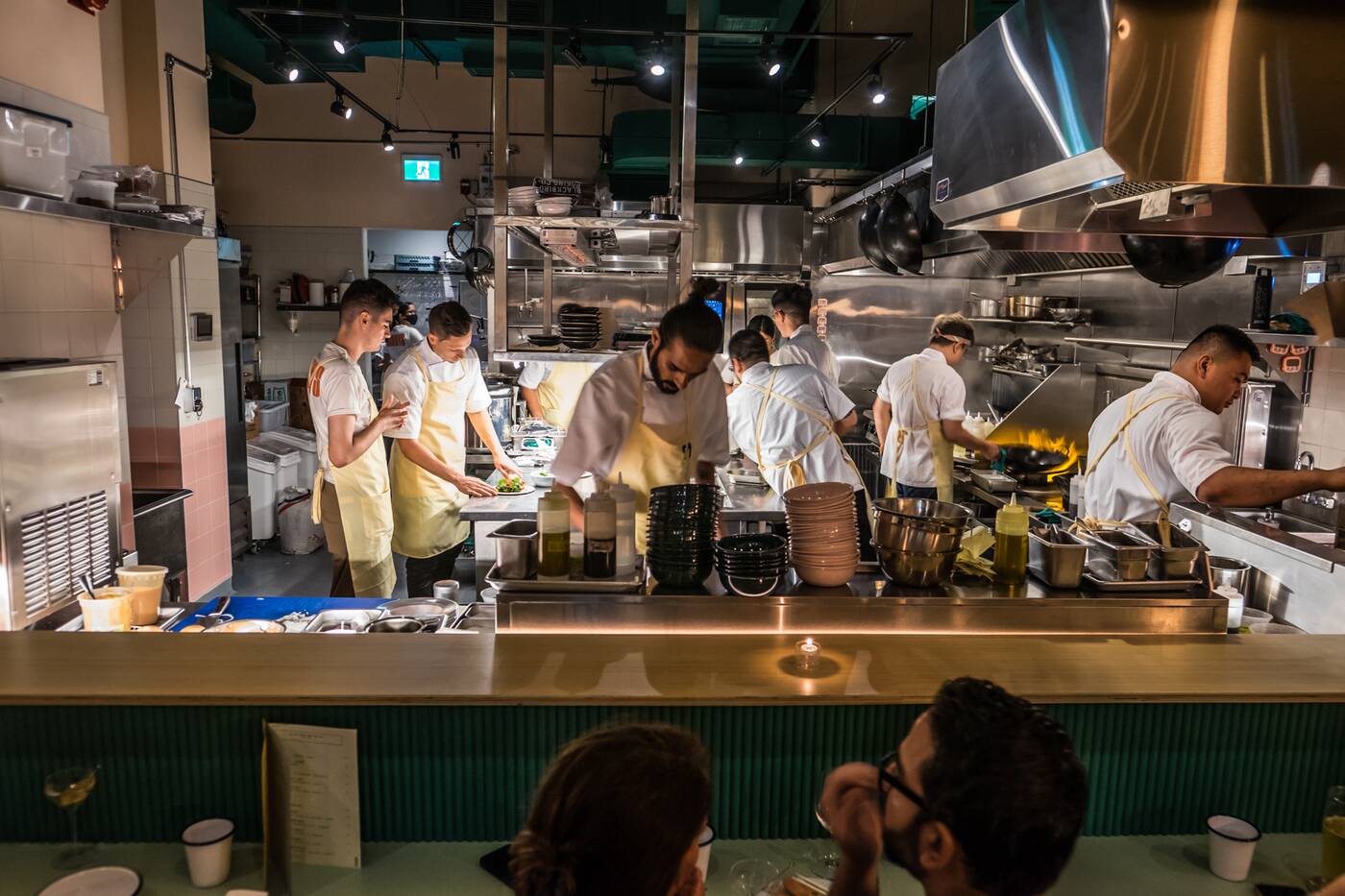 Along with Schwartz and Chong, head chef Joseph Ysmael, sous chef Peter Nguyen, and wok cook Eddie Ling are behind the menu that's inspired by the bolder flavours and coveted textures found in Chendu and Xi'An, plus the open-air dai pai dong (food stalls) of Hong Kong.

Here, Ysmael and the team man the charcoal grill and wok, coaxing out the traditional flavours and textures that's prized by the culture but could be new to many diners. 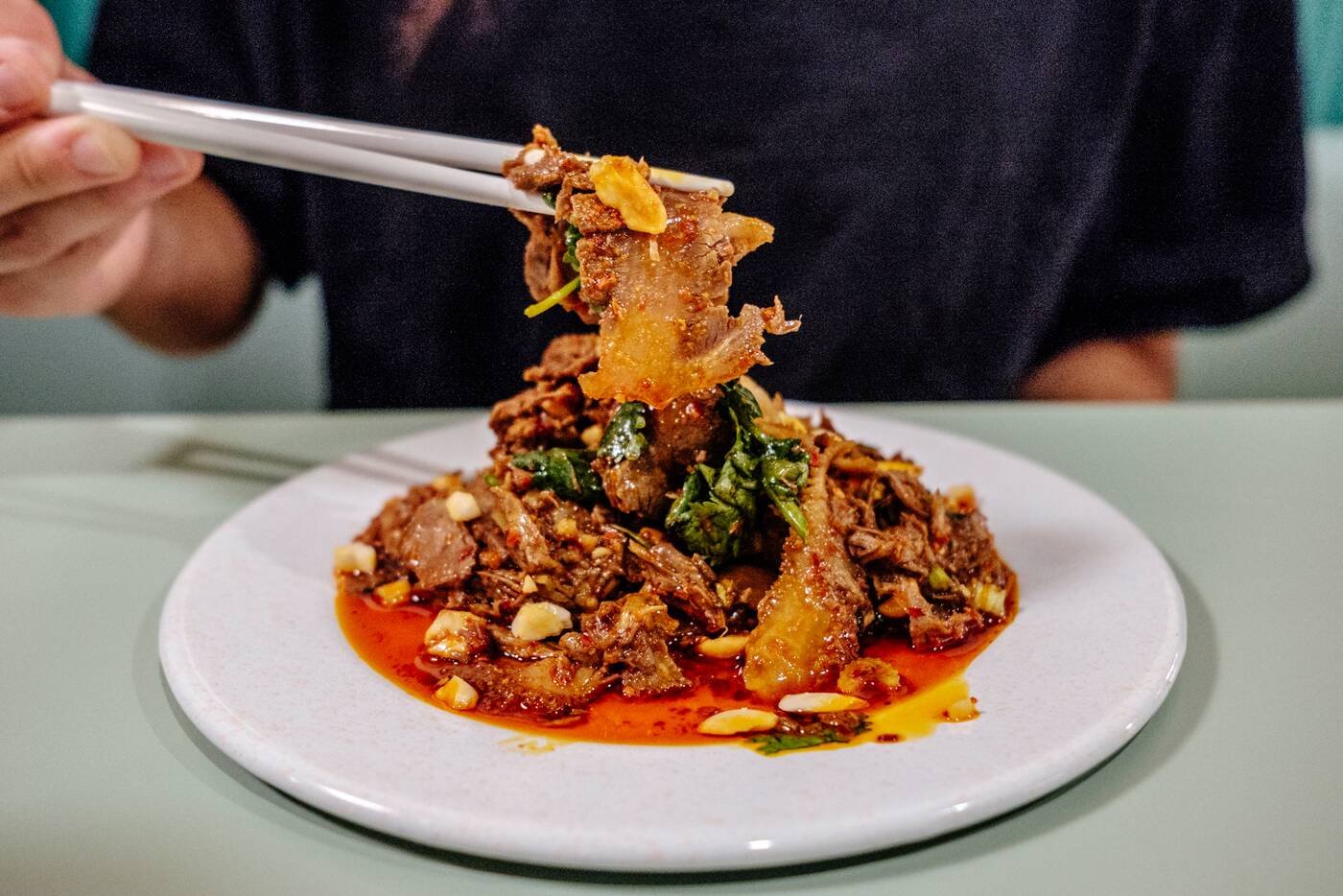 Sunnys' signature dish, the Husband and Wife Beef ($22) is the perfect example of this embrace of textures.

The cold starter is composed of ribbon-like shavings of master sauce braised shank, tendon, and tripe that are tossed in chilli oil and then dusted with peanuts.

It's a benchmark take on the slightly numbing Sichuan dish with the glorious collagenous, chewy, and crisp textures of the offal coming through in what is essentially a meat salad. 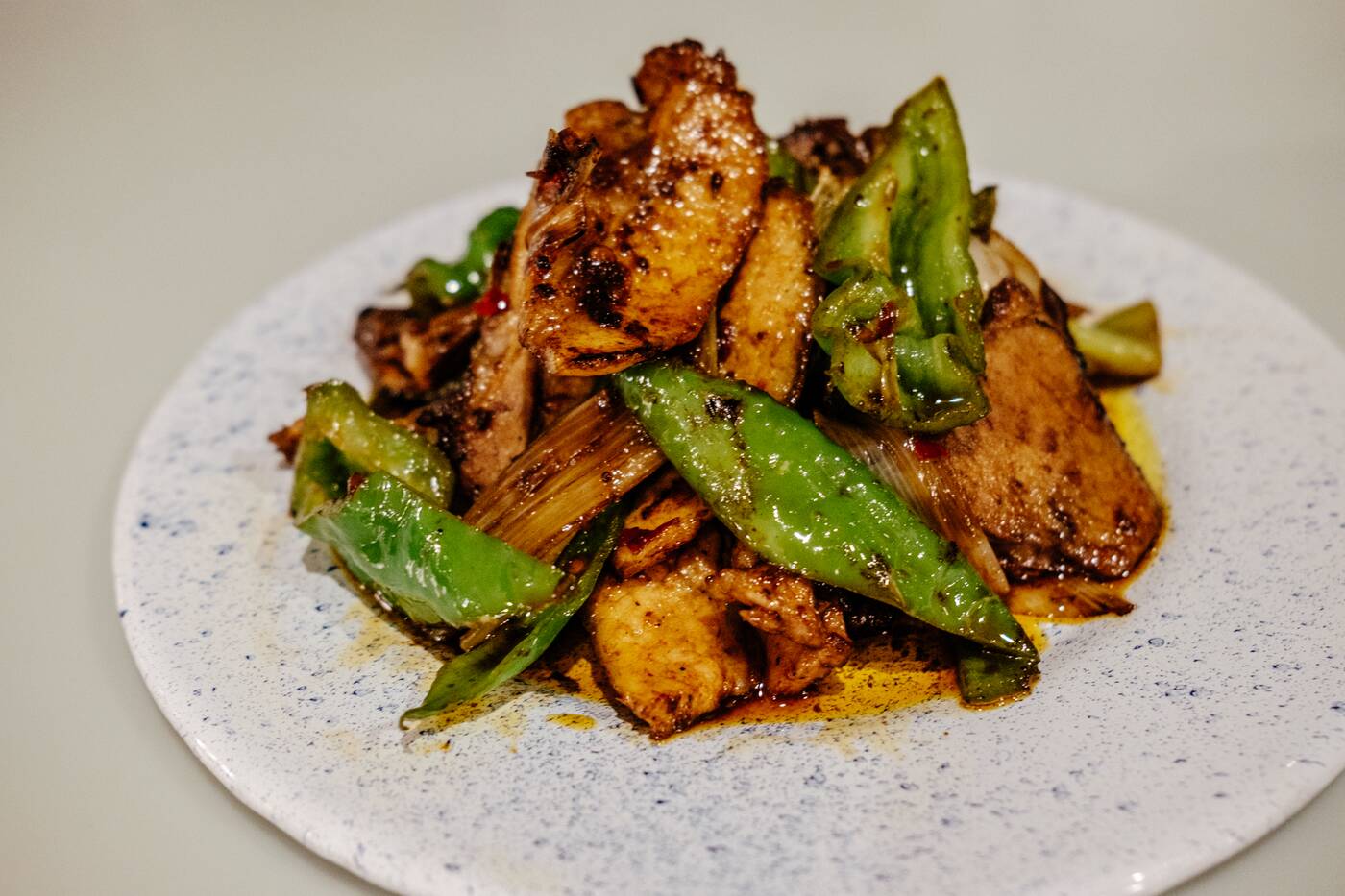 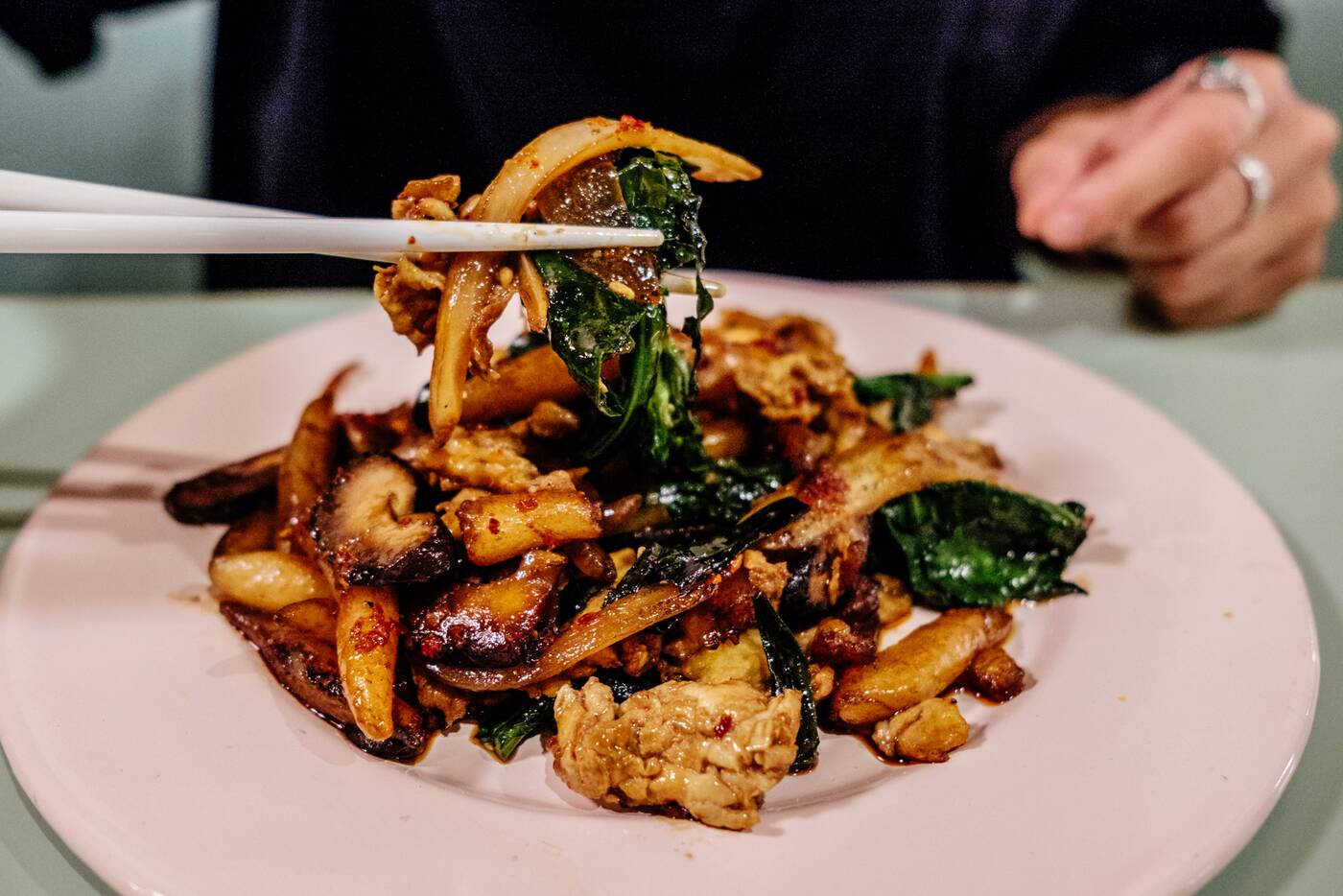 The Guangdong classic Silver Needle Noodles ($17) uses hand-rolled noodles sourced from a nearby supplier and are simply stir-fried with shiitake mushrooms, scallions, and a blend of three soy sauces. 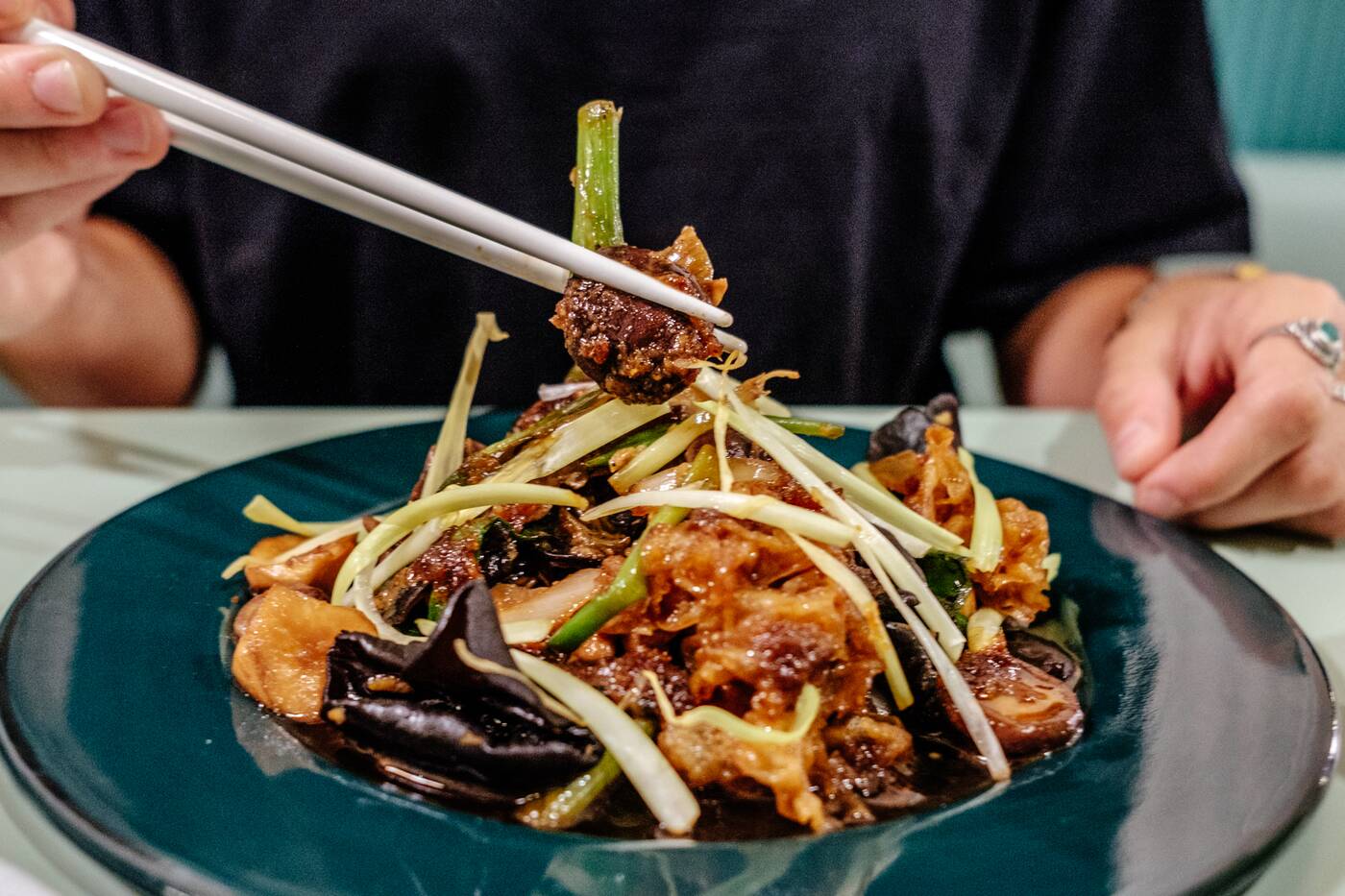 Meanwhile, the King Mushroom Stir Fry ($18) is an umami-bomb that slicks the fungi, garlic scapes, and ruffly snow fungus with homemade sacha sauce. 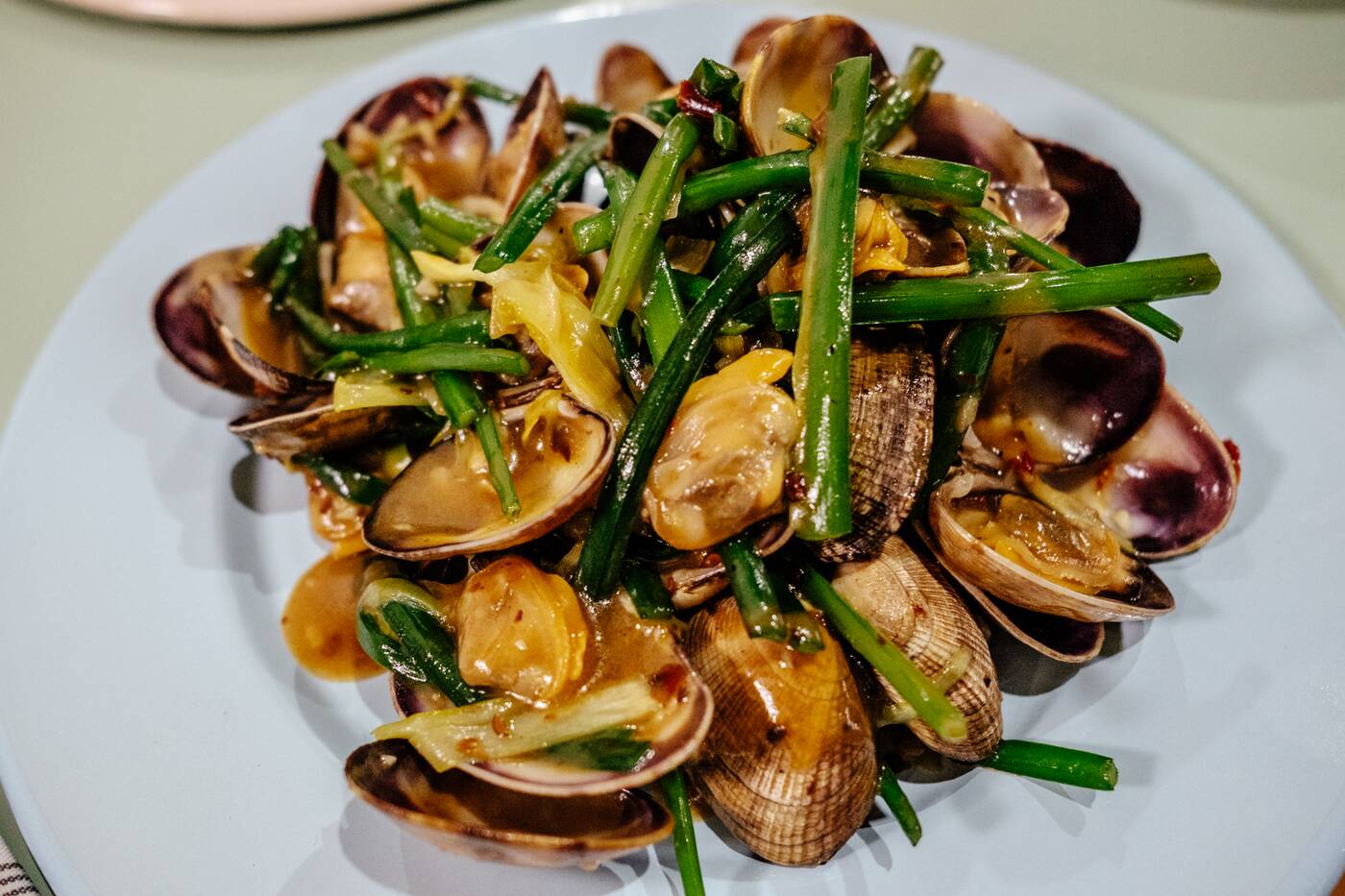 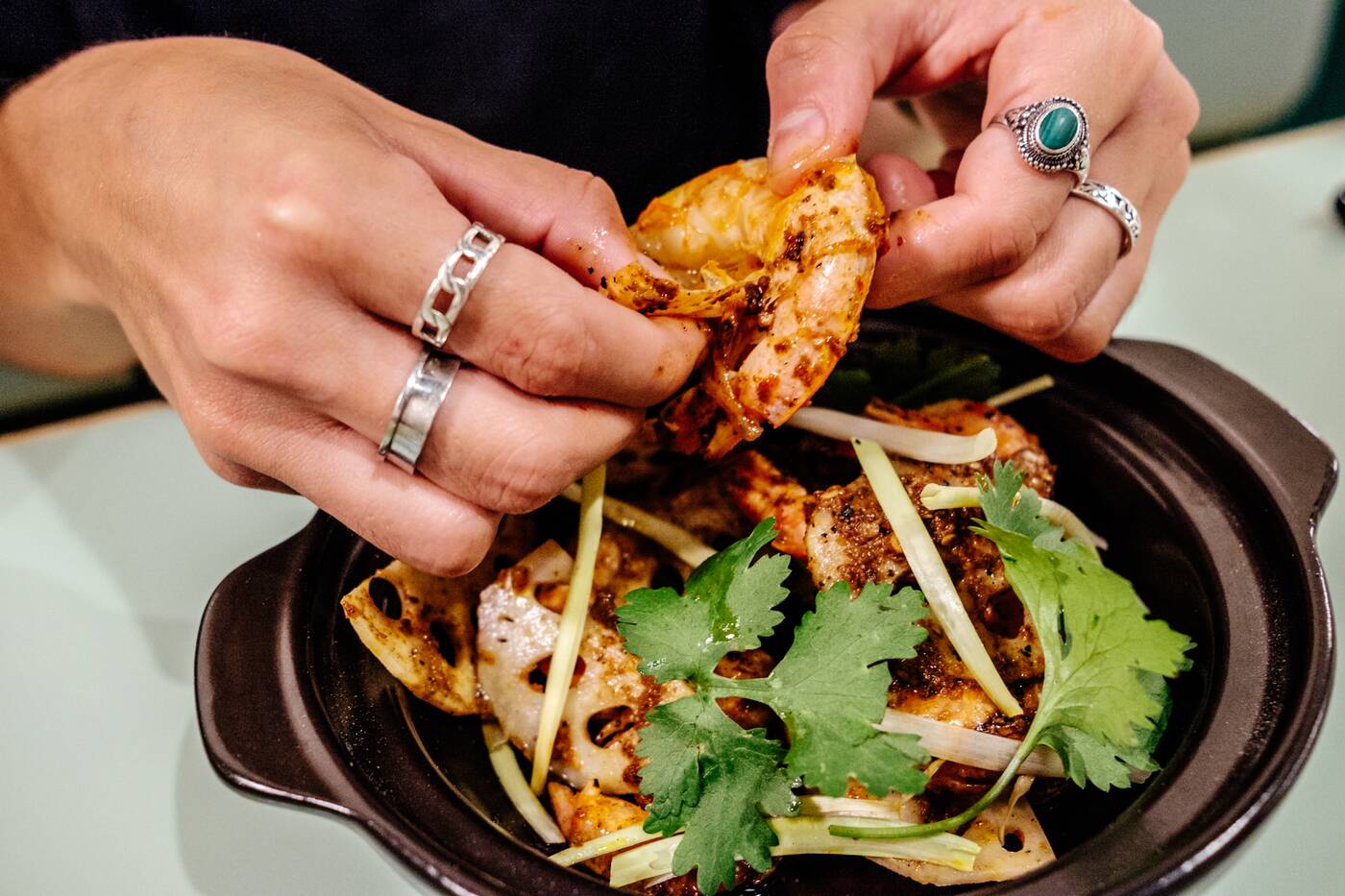 The charcoal barbecue takes centre stage in dishes such as Hot Pot Red Shrimp ($24). Buried under slices of lotus root, whole shelled shrimp are coated with doubanjiang, caiziyou (rapeseed/canola oil), and fermented ginger to give that coveted lip-tingling mala heat. 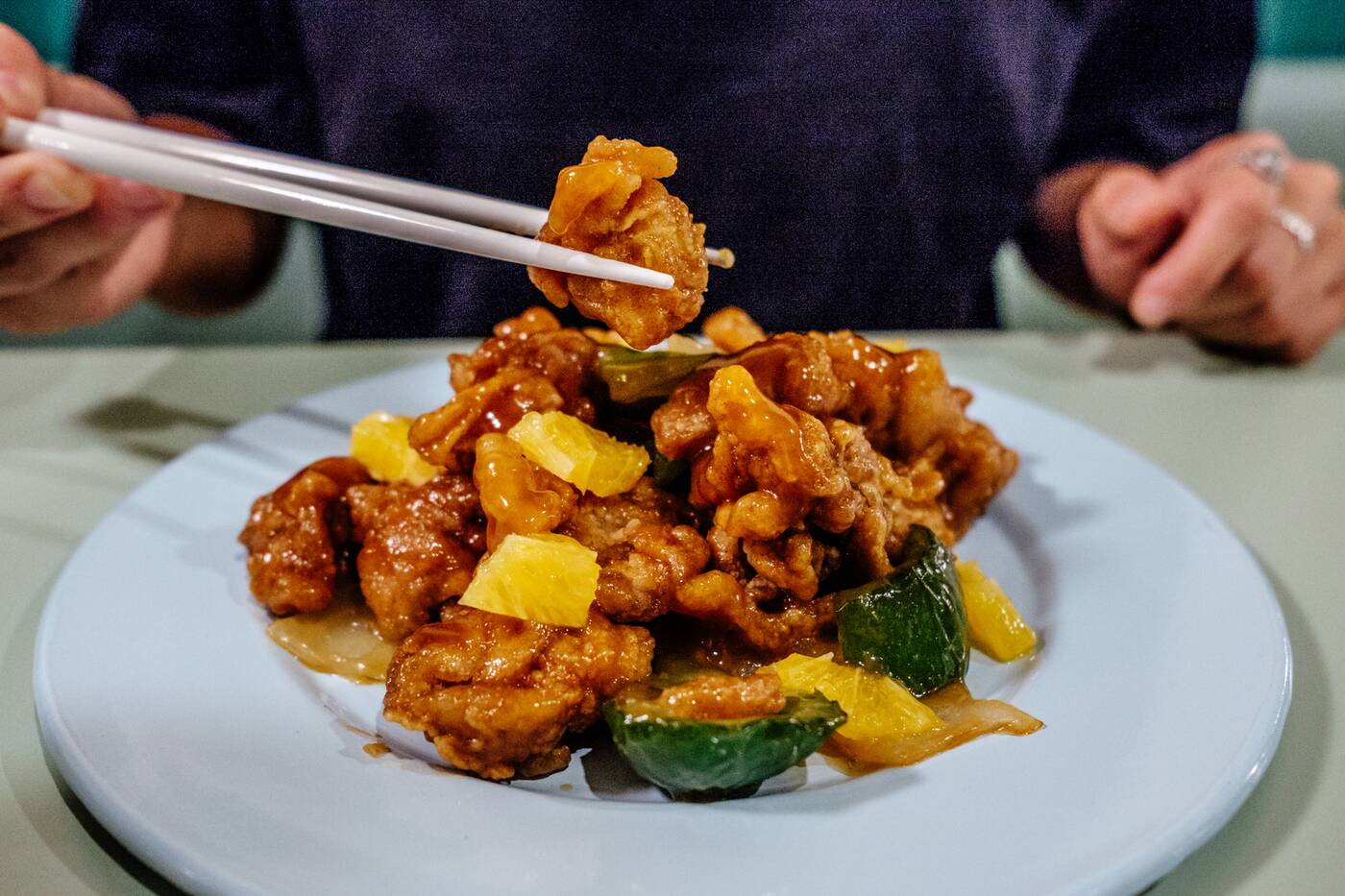 Then there's the cheeky nod to a very legit style of Chinese cuisine: American Chinese food. Created by the head chef of Panda Express in Hawaii in 1987, Orange Chicken ($24) at Sunnys is a touch more refined.

The kitchen wok-tosses crispy double-fried chicken chunks with scallion, ginger, garlic, aged tangerine peel and a homemade orange glaze. And yes, those are pieces of pineapple hiding among chunks of bell pepper in there. 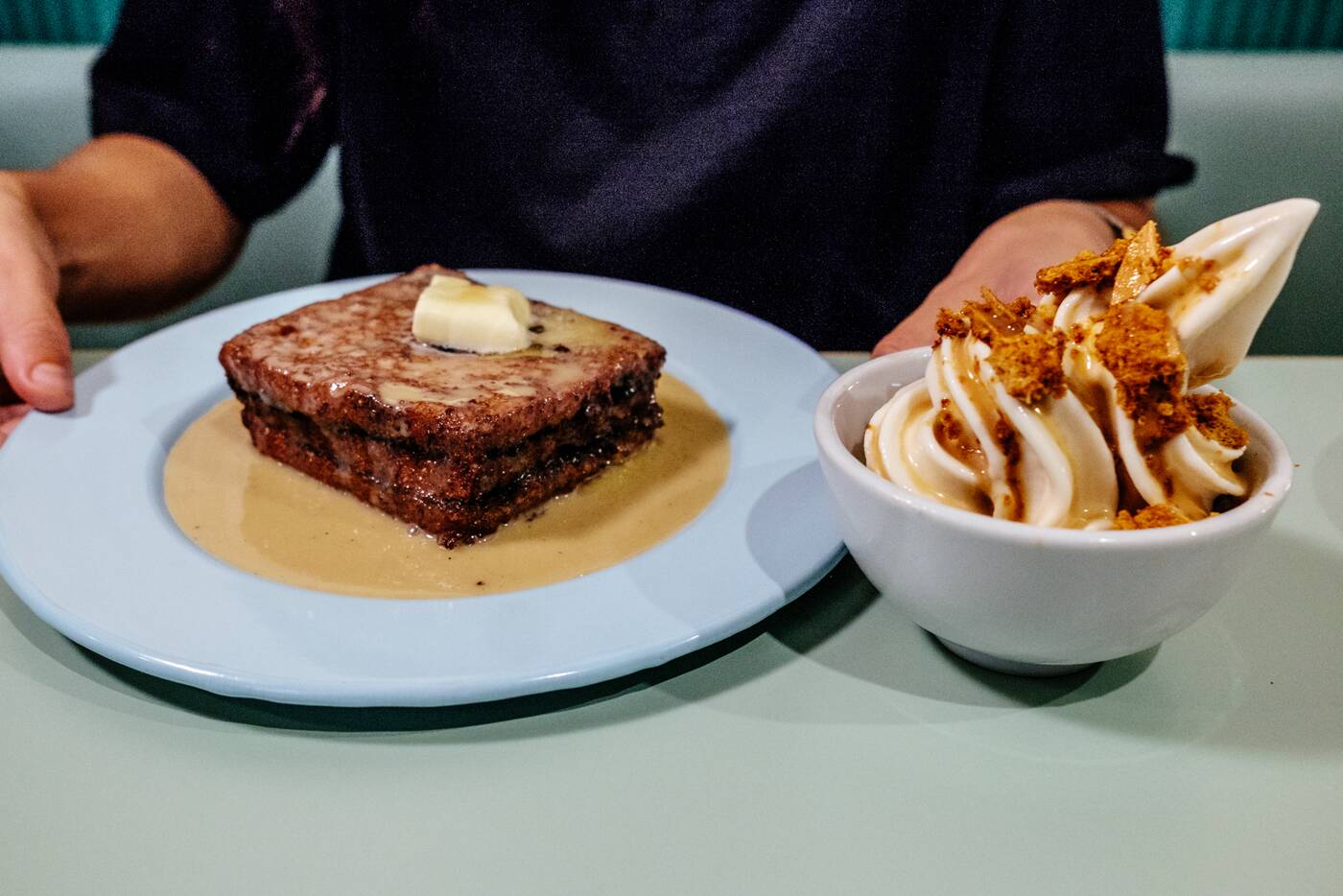 To finish, there are two desserts, both using ingredients sourced from neighbouring Kensington Market vendors. 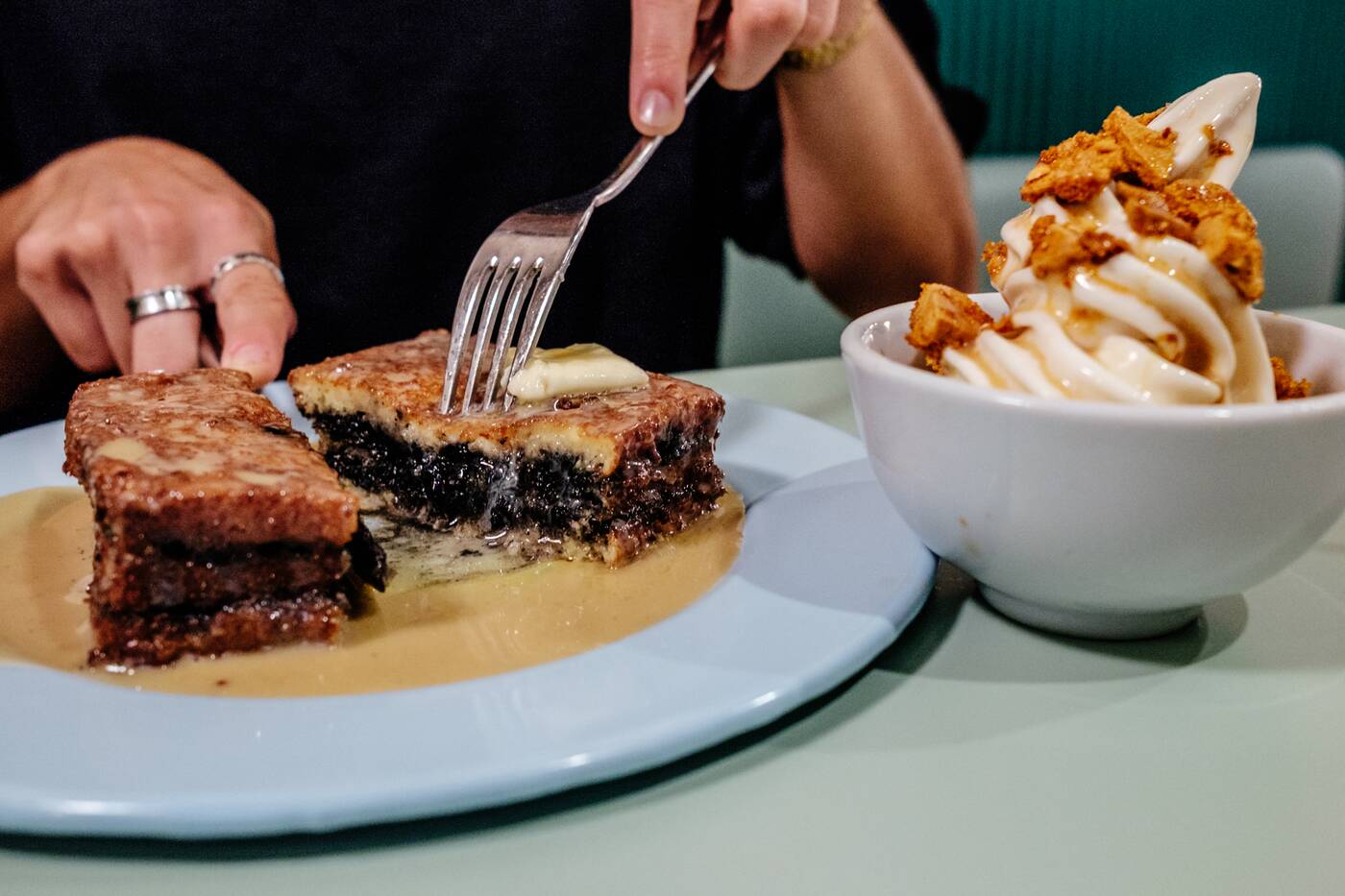 Prepared like French toast, the shareable dessert is drizzled with oolong-infused condensed milk and a pat of butter – stereotypical of Hong Kong diner fare – to finish. 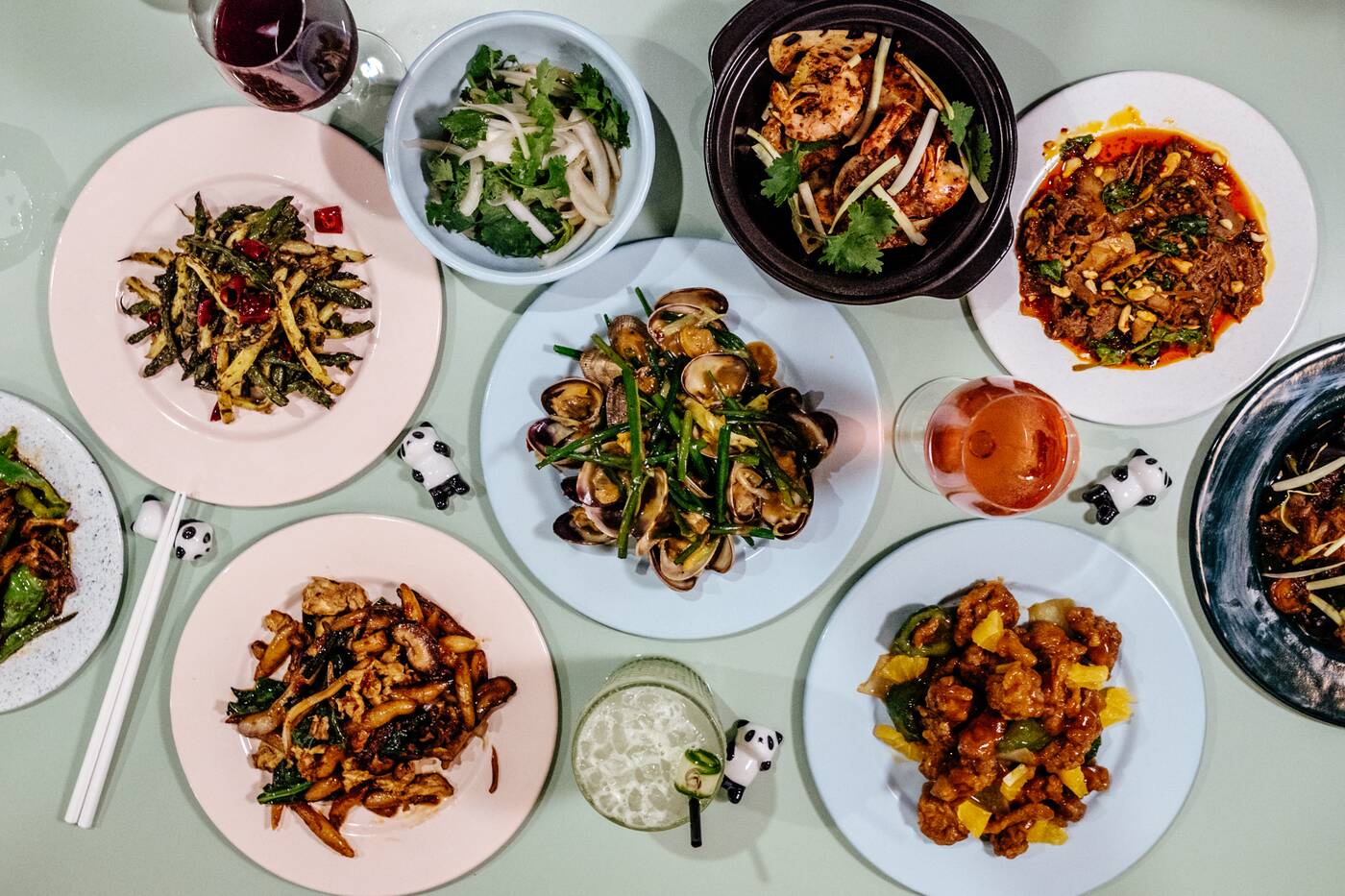 Can't decide on what to order? If you're a group of four or more, the kitchen can cook up a storm for you at $75/per person. 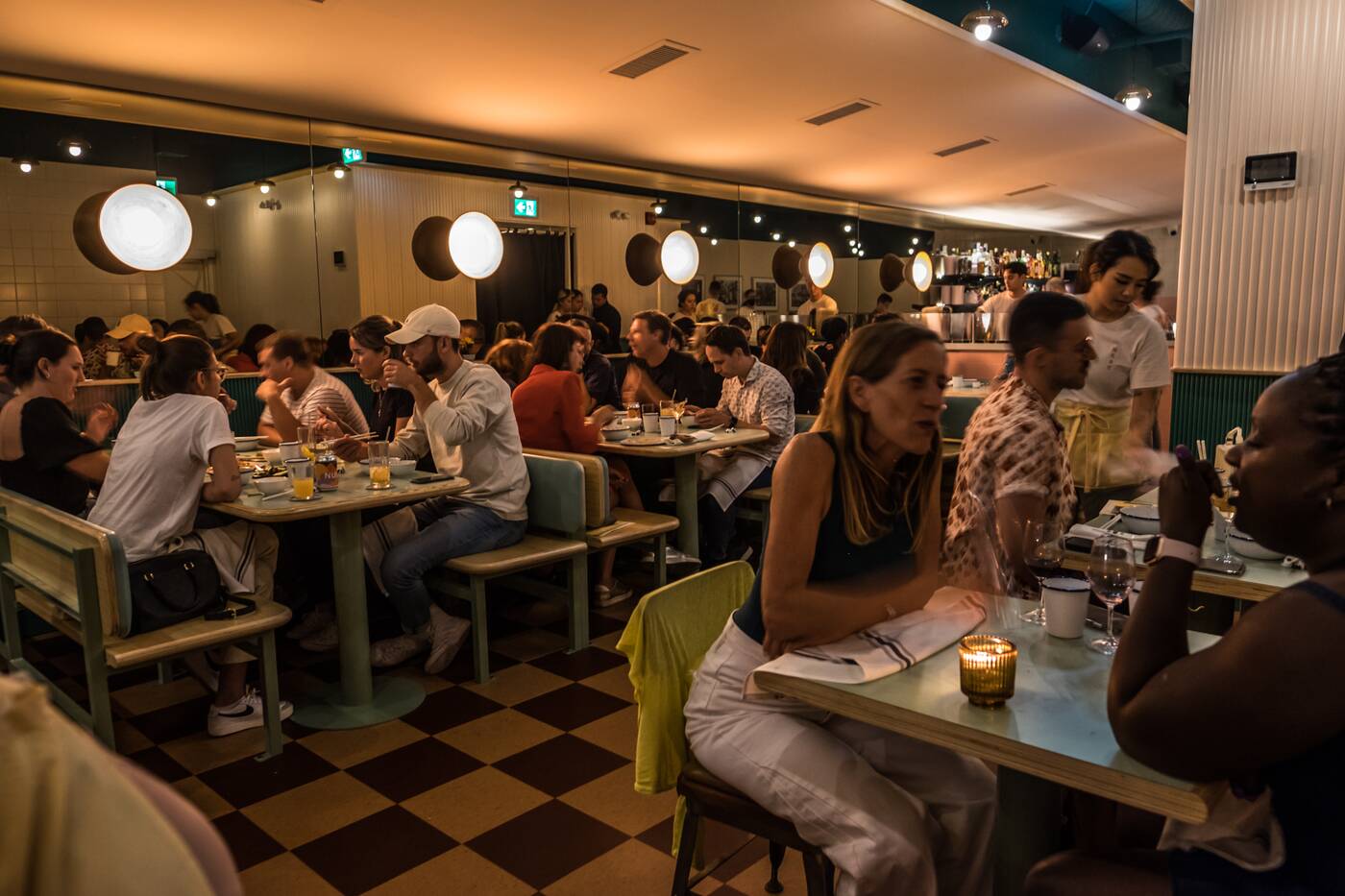 In addition to a wide range of old and new world low-intervention ("natural") wines, and beers, the space specializes in sakes and has a deep roster of Baijiu (Chinese liquor).

Head bartender Nick Chong is behind the crafted libations that include flavours from the Chinese pantry like hawthorn, wolfberry (aka goji berries), osmanthus, Chinese pear, or using sesame oil in a fat-washed cocktail.

The Green Delirium ($18), for example, is a fresh and vegetal absinthe-spiked cocktail that's made using cucumber skin tequila, snap pea syrup with lime and St. Germain. 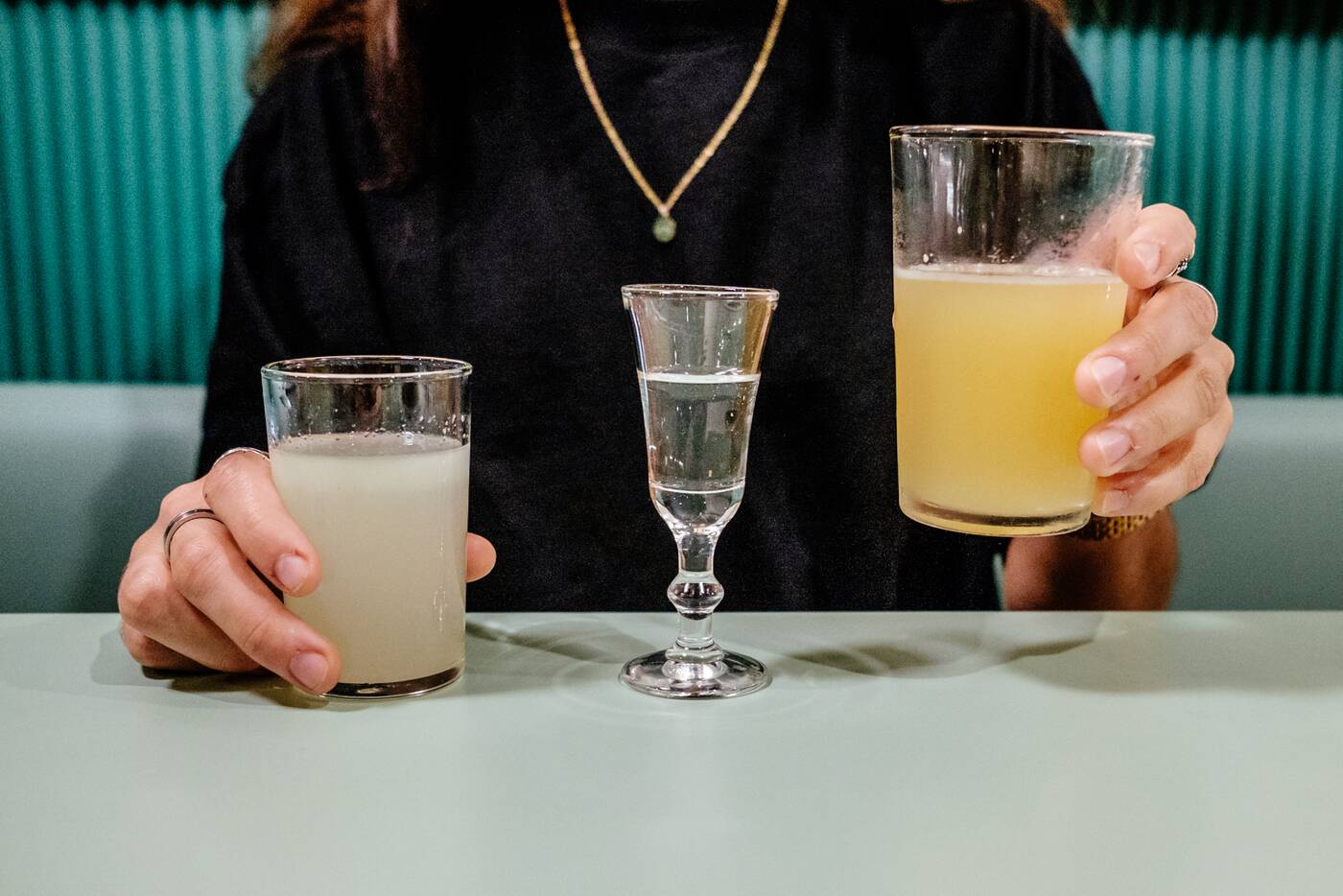 But then there's the table engaging Gunpowder Slap ($24). The three-part challenge features daiquiri, a shot of baijiu, and draft beer from Burdock, which you're expected – for better or worse – to drink in rapid succession. 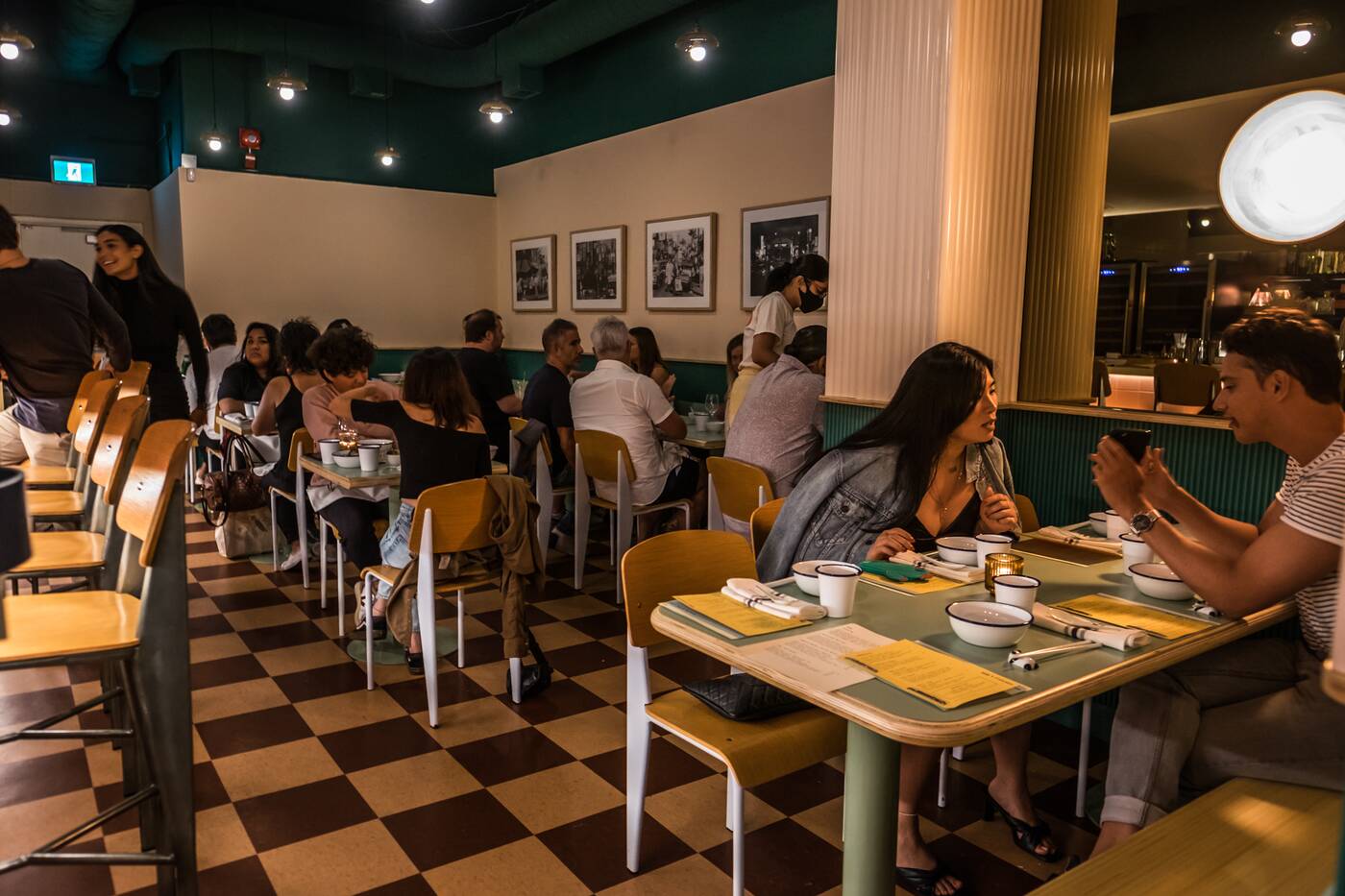 Matching the menu, the moody room takes a page from classic Hong Kong-style diners with their retro mint-green and dusty rose colour palette.

In addition to low lights and a playlist consisting of 70s and 80s disco and funk, the rear dining room wall features vintage black-and-white photographs of Chinatown and Kensington Market.

Next season, they'll add a 25-seat patio, but until then you can dine in one of the 75 seats inside that are split among booths, two-top tables, and high bar stools. 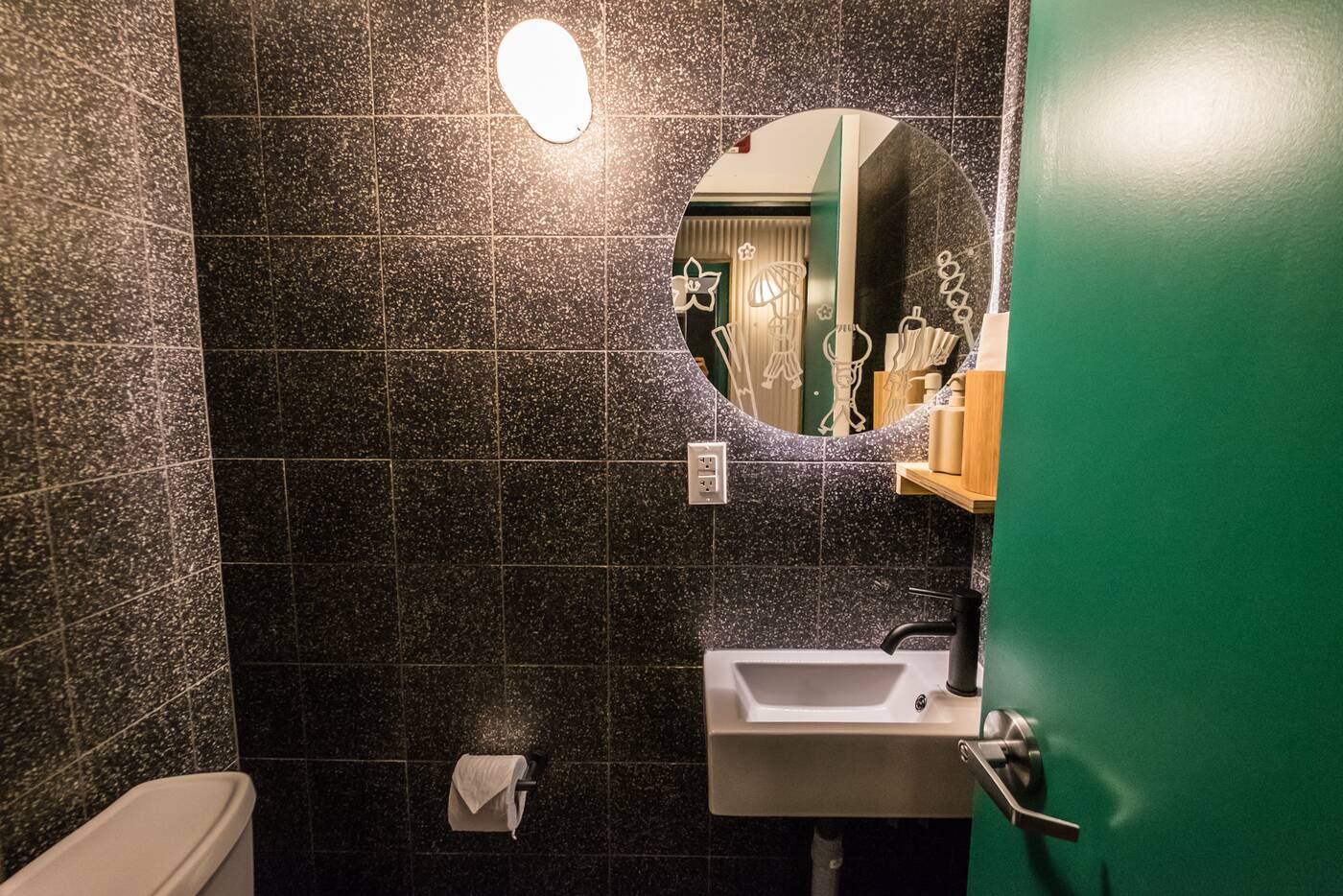 Known in the community for their philanthropic efforts, the Big Hug Hospitality team has commissioned their menu designer Justine Wong of Patterns and Portraits, to paint the restaurant’s bathroom mirrors.

The display will feature a different Canadian artist every four months, with the mirrors being auctioned off to raise proceeds for the Fort York Food Bank and a charity of the artists' choice. 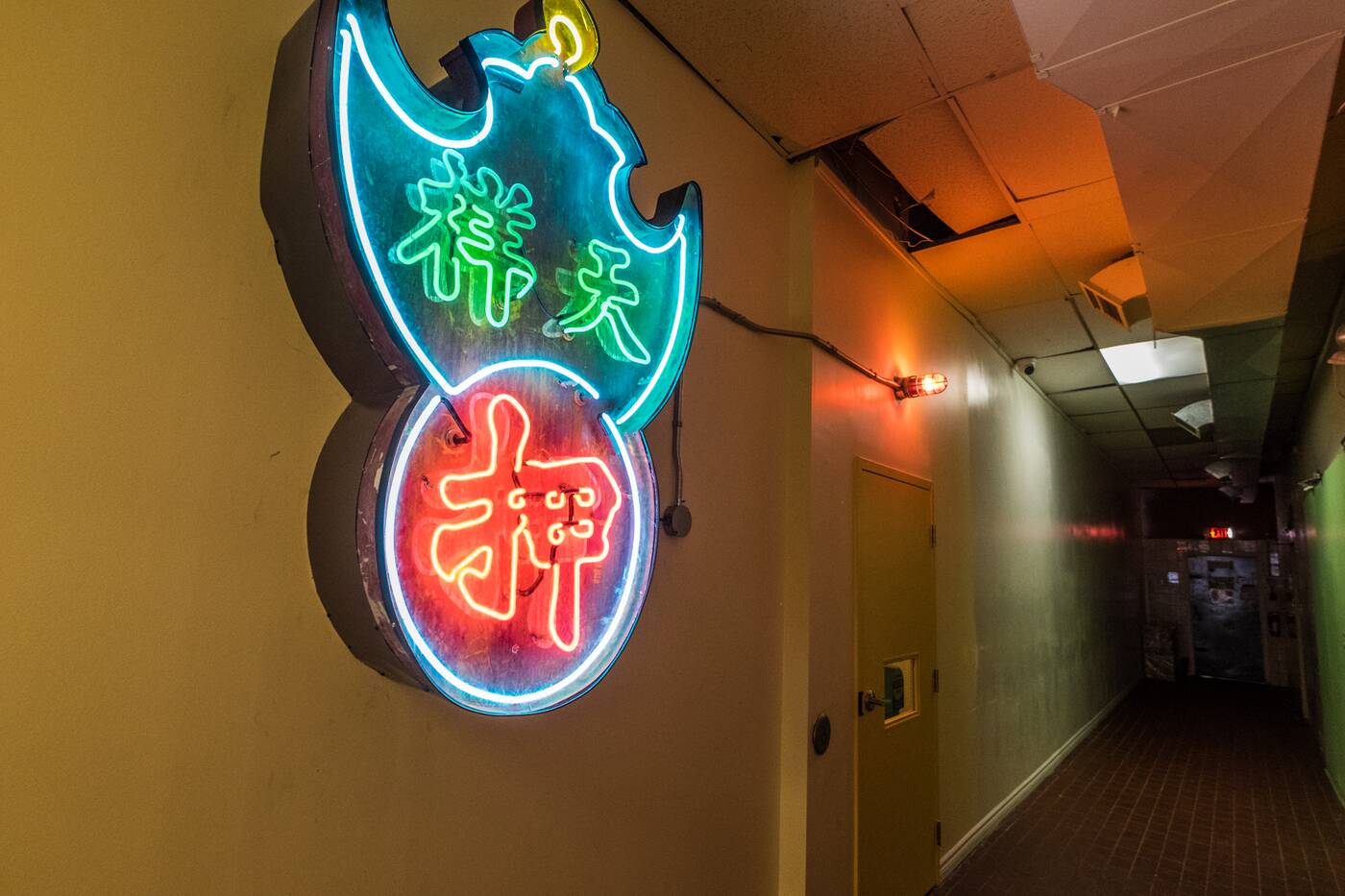 Sunnys Chinese takes over the former home for Cold Tea, Kensington Market’s best-known worst-kept secret. For the uninitiated, you can find the entrance to the restaurant at the far end of Kensington Mall where there’s a neon sign and the red goal light above the door.