Cold Tea is one of Kensington Market’s worst-kept secrets. In a neighbourhood where a hidden speakeasy or after-hours club is always right under your nose waiting to be stumbled upon, this bar in Kensington Mall marked only by a red light above the door fits right in.

The name itself is taken from local jargon, code for beer often served less than legally in teapots at Toronto’s nearby Chinatown restaurants. The spot is still owned by originators Stacey Welton and Oliver Dimapilis. 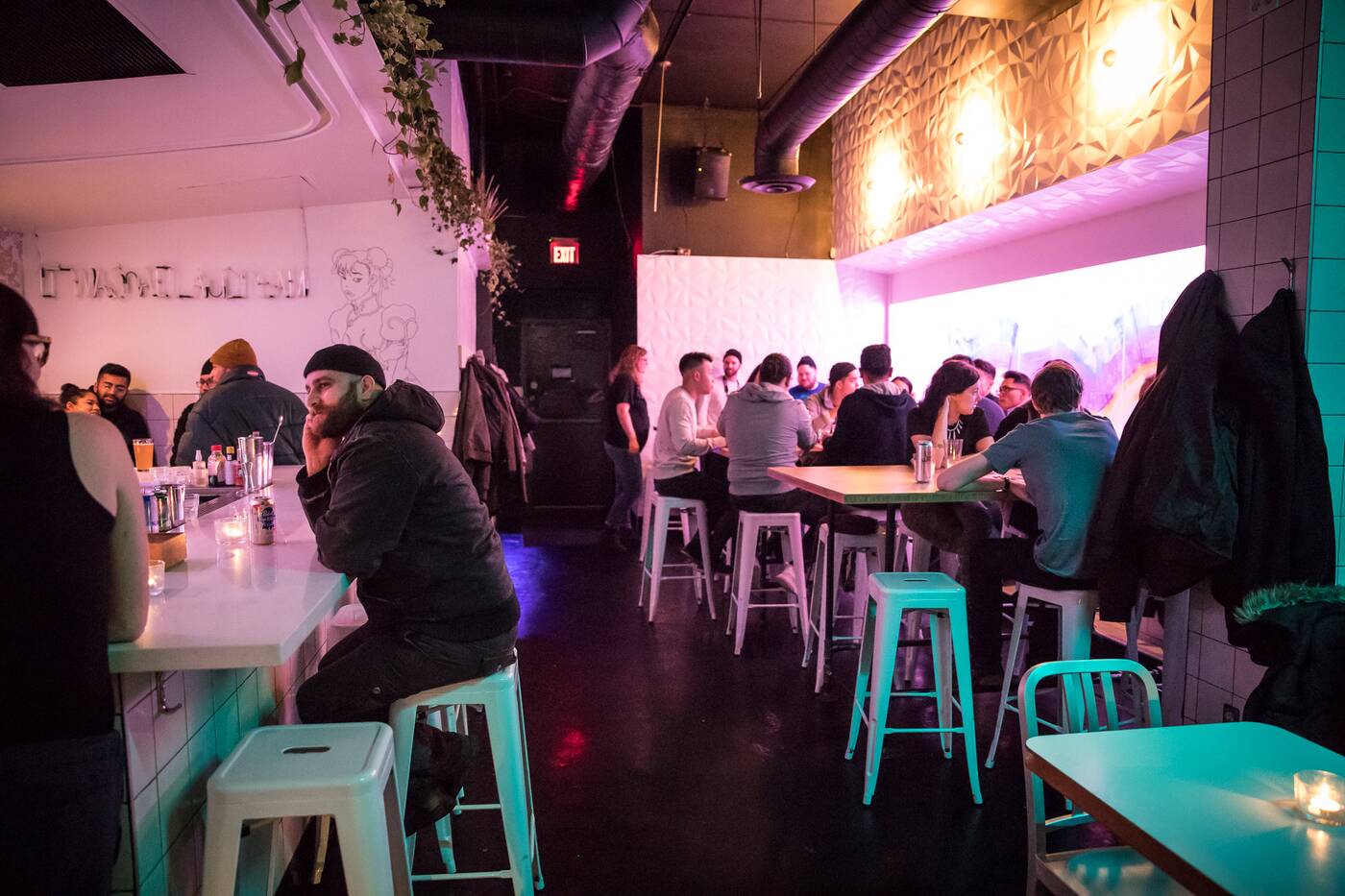 Cold Tea underwent a major rehaul between 2017 and 2018. Where before the bar had a grungier feel that matched its underground vibe, it’s now much more sleek with a huge display case dedicated to rotating art installations, the first of which by the artist who decorated the space with collage originally, Jeff Garcia AKA @mango_peeler. 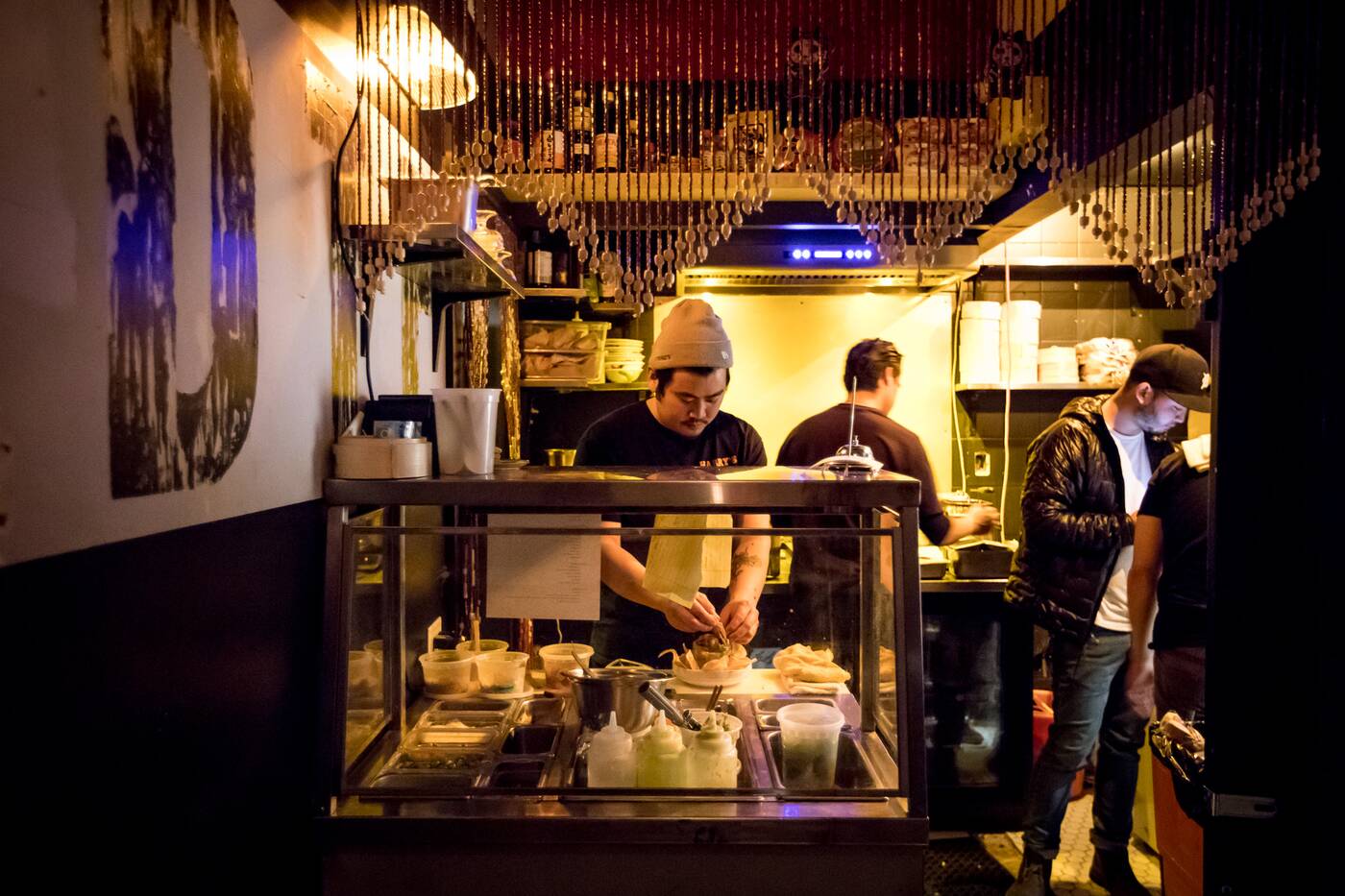 Cold Tea has teamed up with Leemo Han of Hanmoto to create their own Asian South American fusion concept, Juanmoto. The OG dumpling stand at the front is the same, but that’s about it: the kitchen had to be built out to accommodate the new level of professionalism. 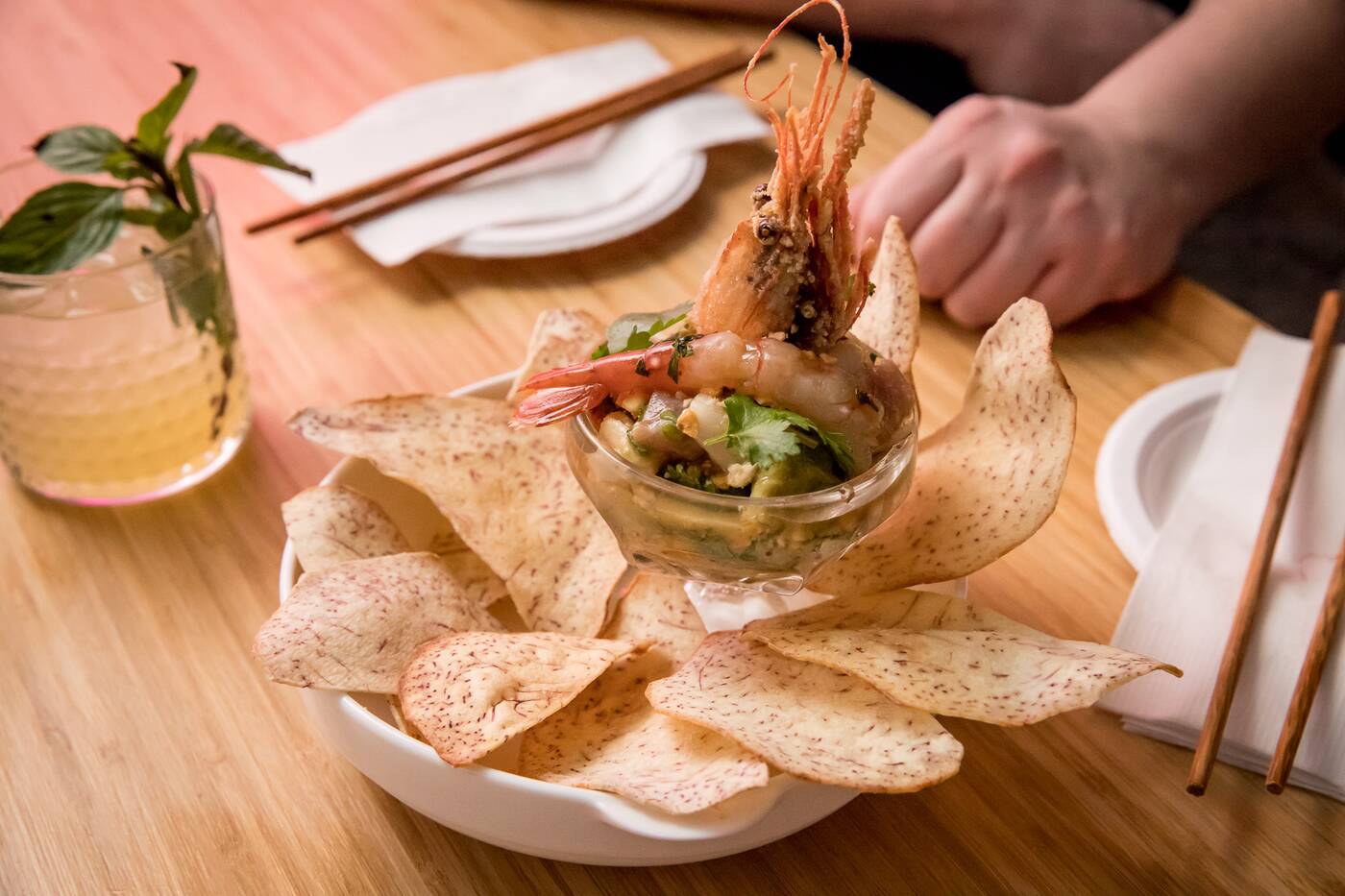 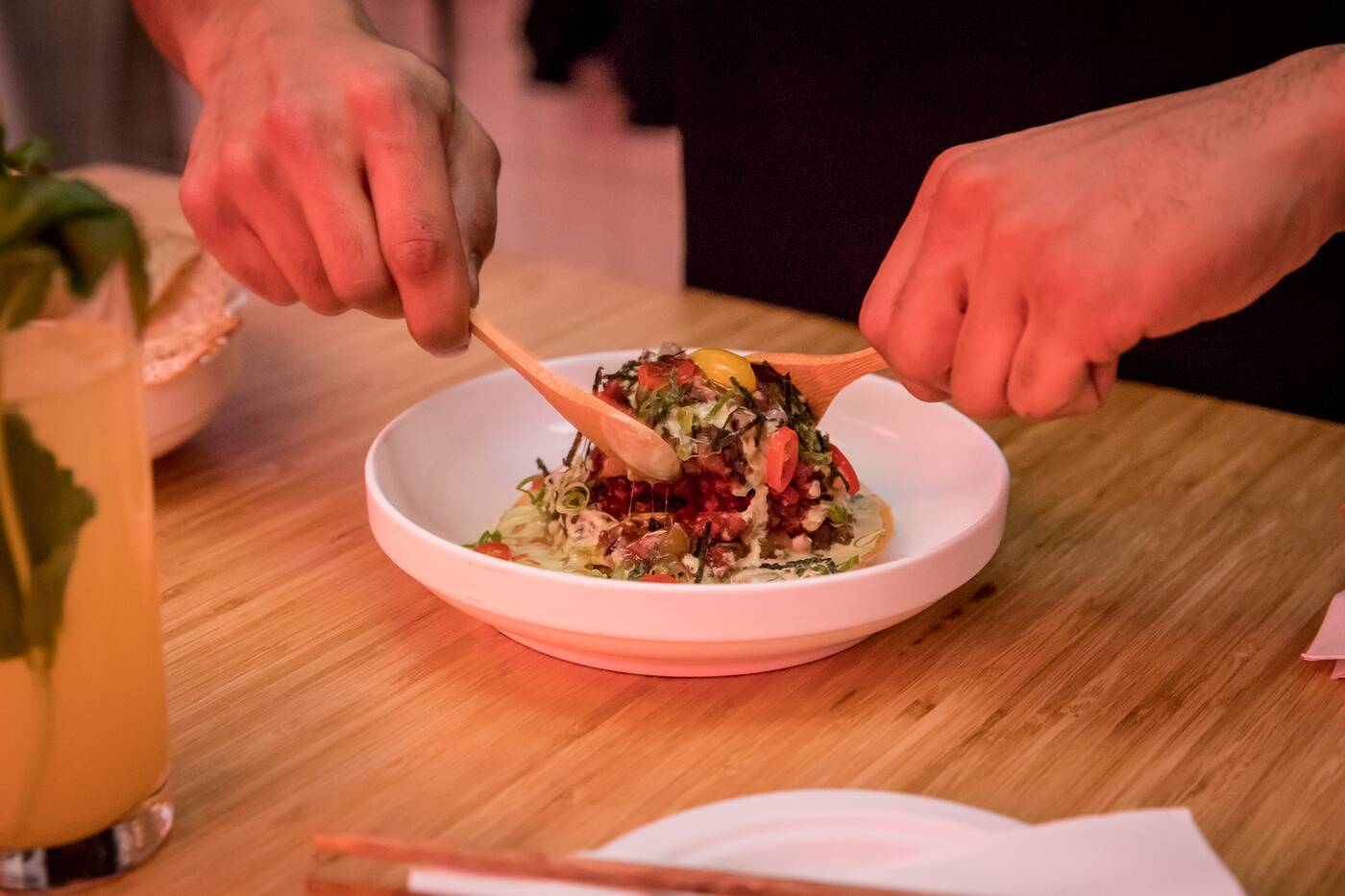 Steak tartare ($14) with chopped wasabi seasoned octopus that adds a fishy complexity is served on a crispy tostada and topped with a quail yolk. A server mixes up the tartare with the yolk and smashes the tostada into chips tableside. 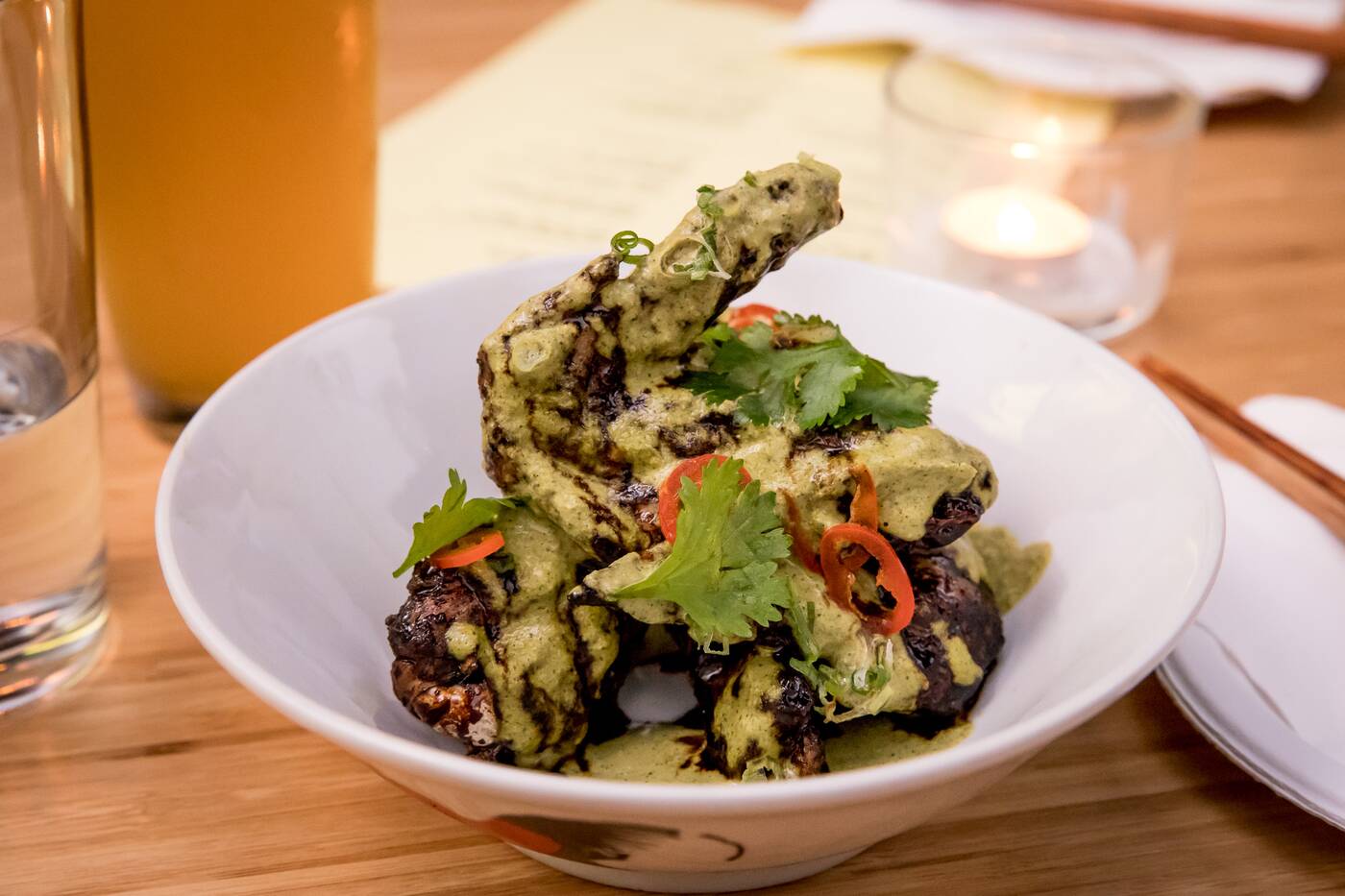 Teriyaki wings ($10) are super messy and come in an order of four whole, hefty wings. They’re charbroiled so they’re smoky and juicy and soy basted so they’re sticky, dressed with a Peruvian aji sauce and garnished with peppers. 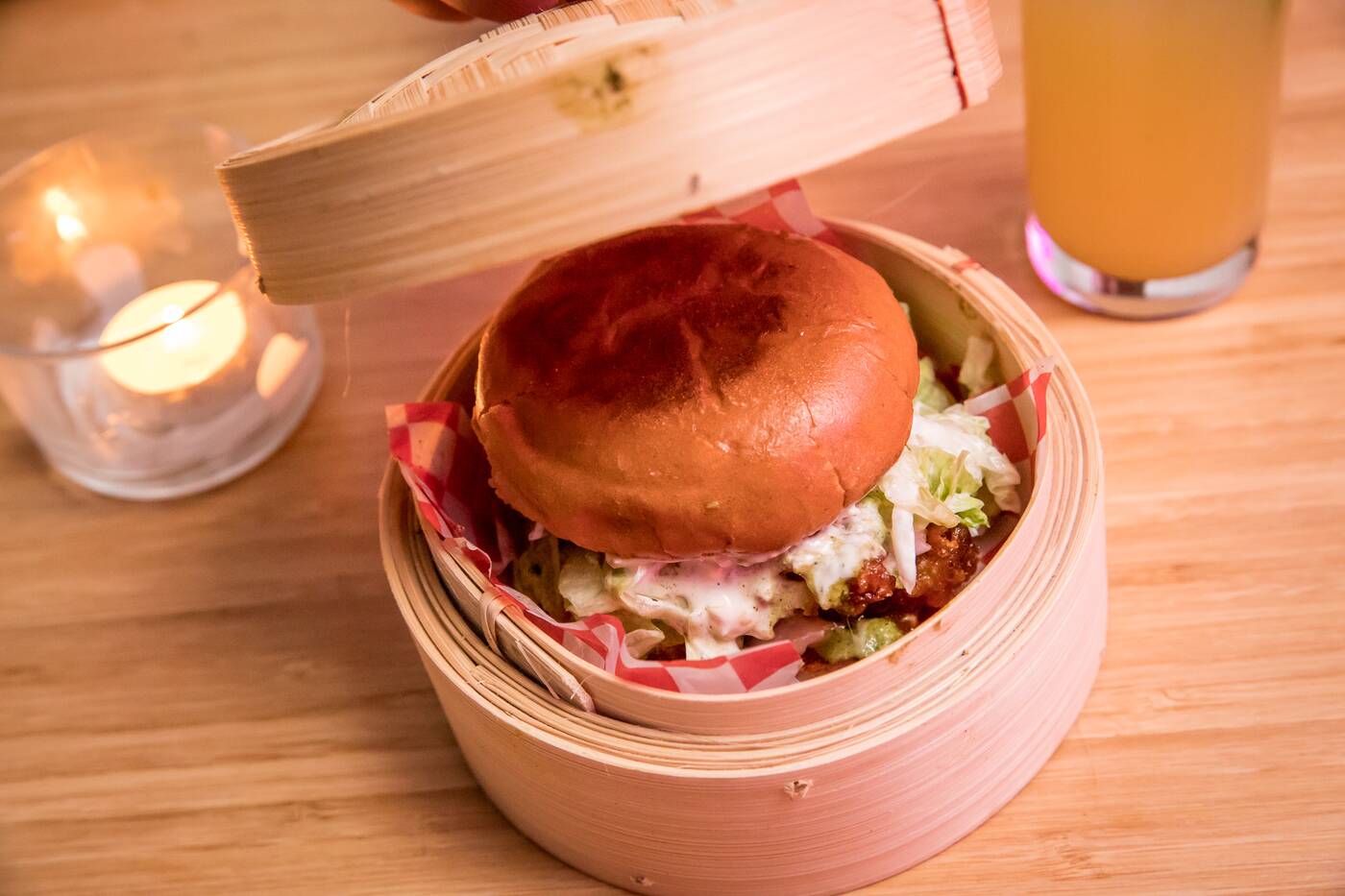 The Tempura McFly ($10) is basically a really good fried chicken sandwich, chicken thigh breaded in tempura batter made with sake. 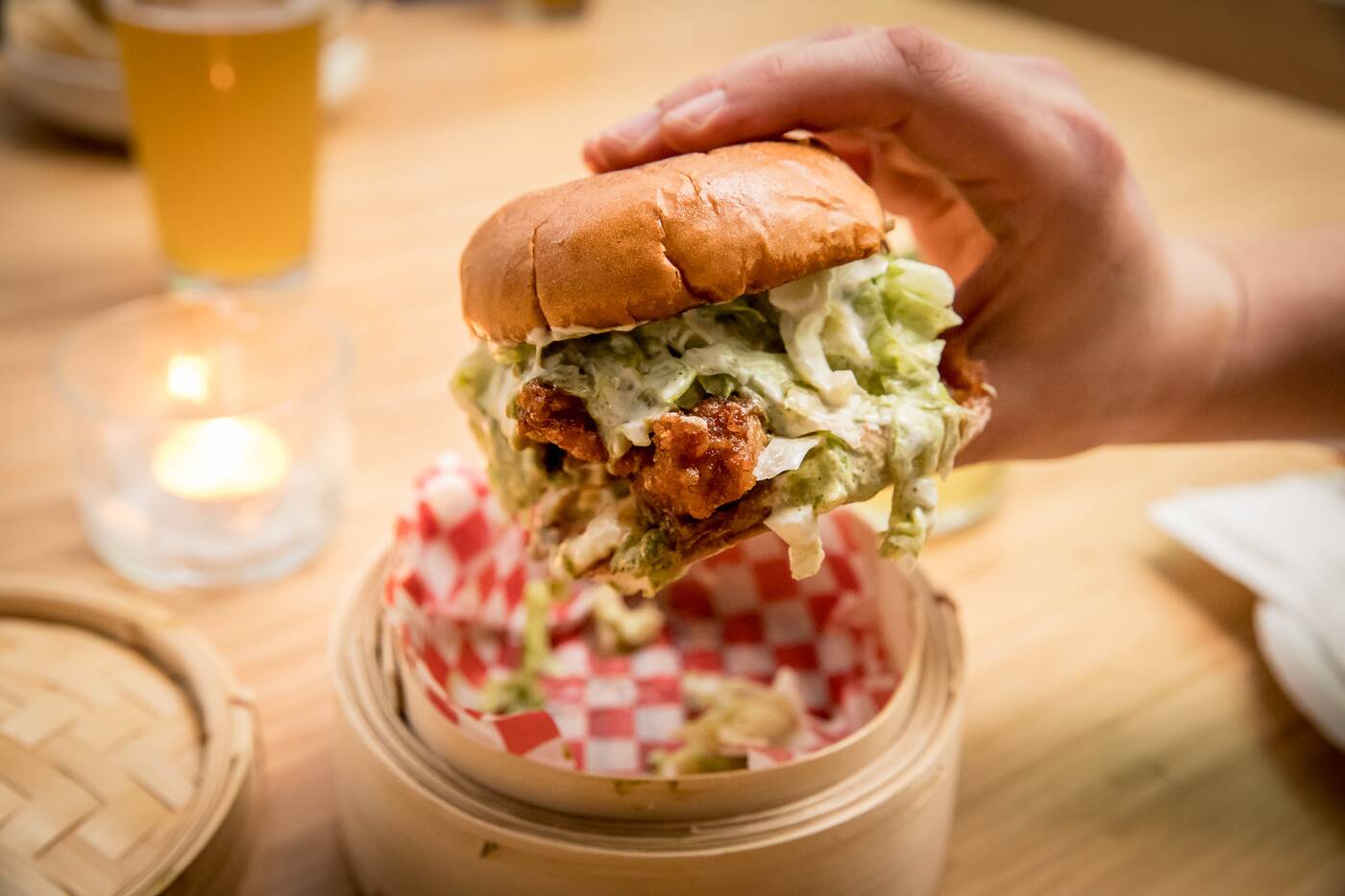 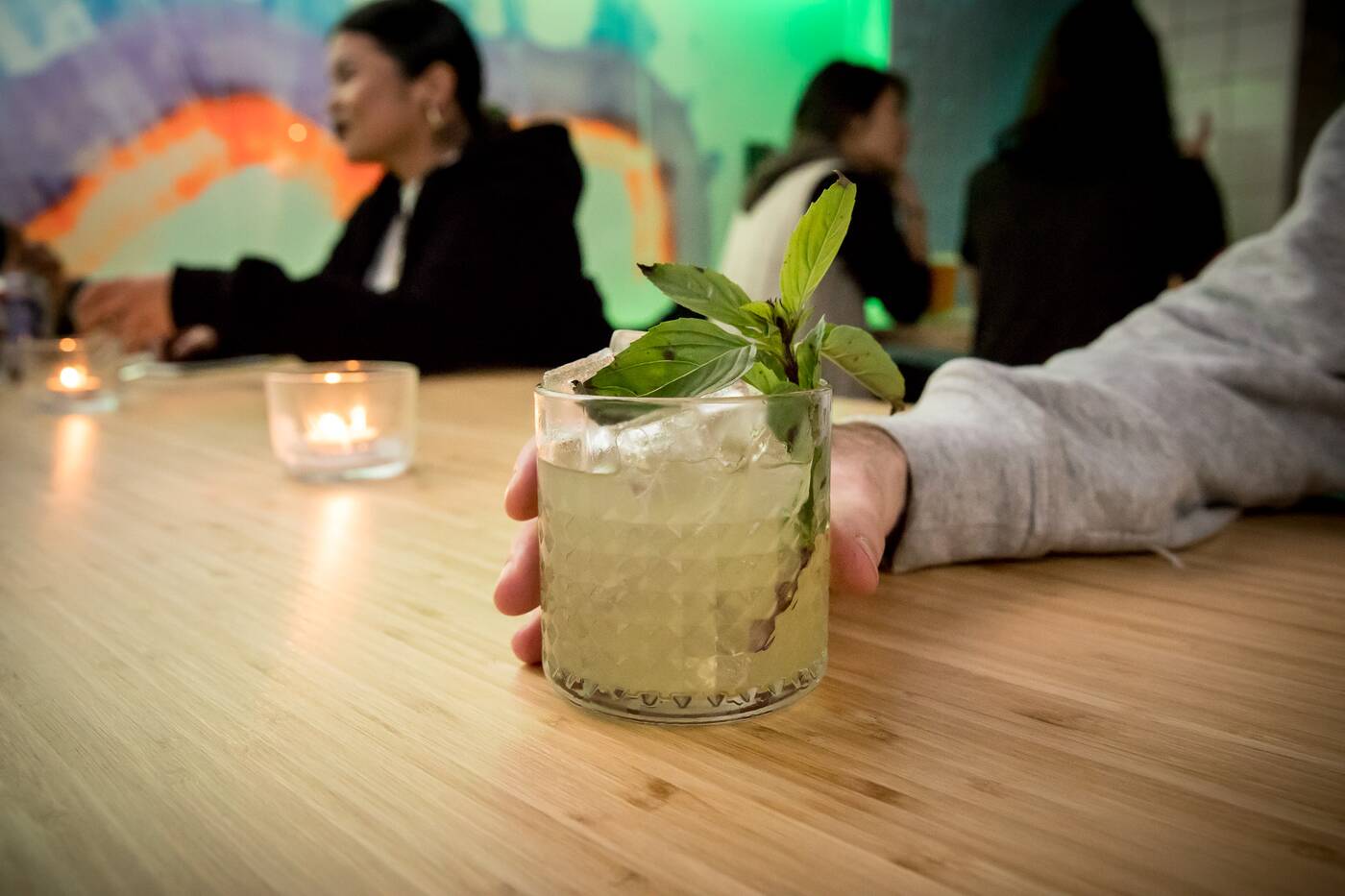 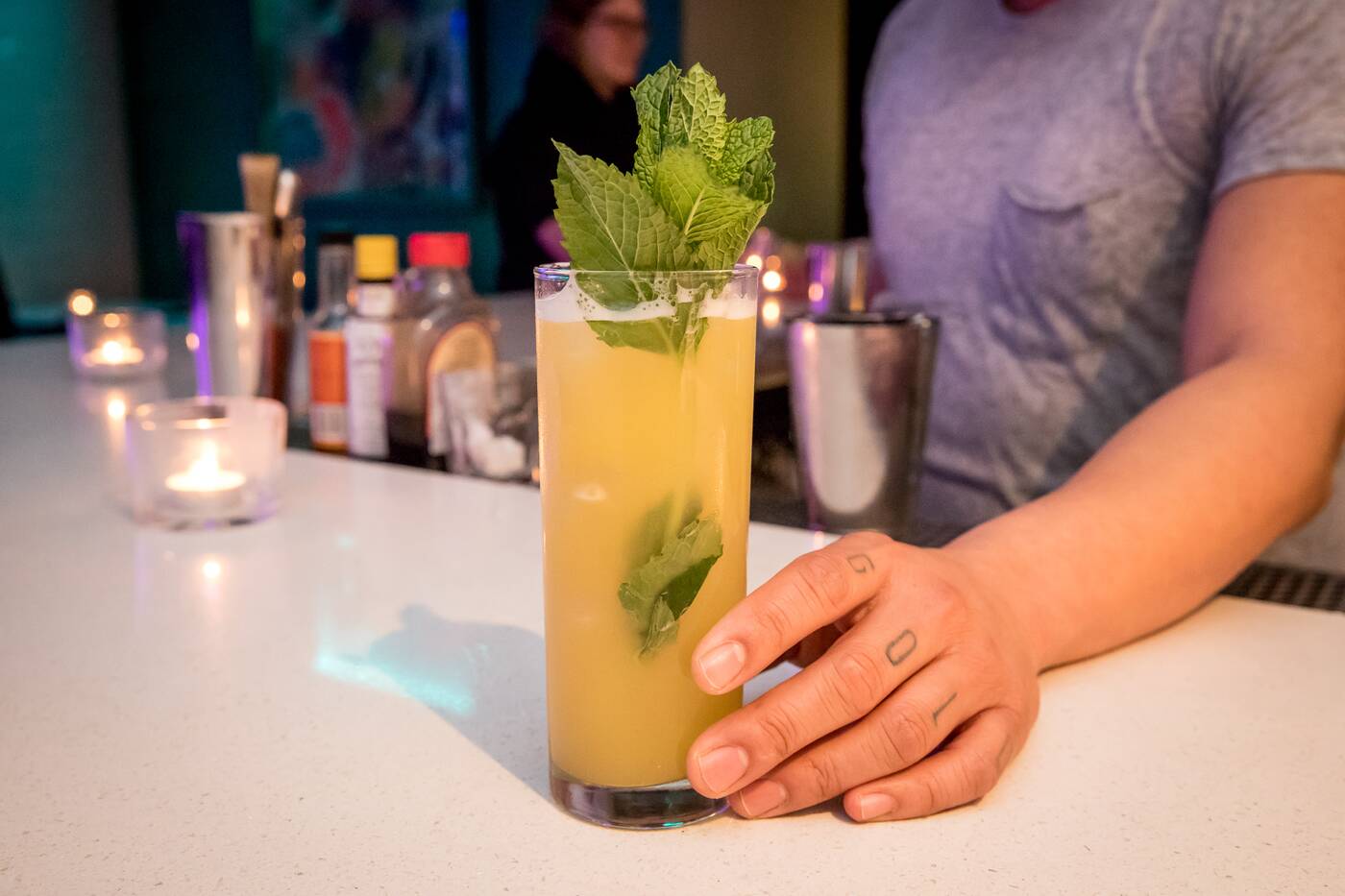 La Flama Blanca ($13) is made with chili tequila and pineapple garnished with mint. 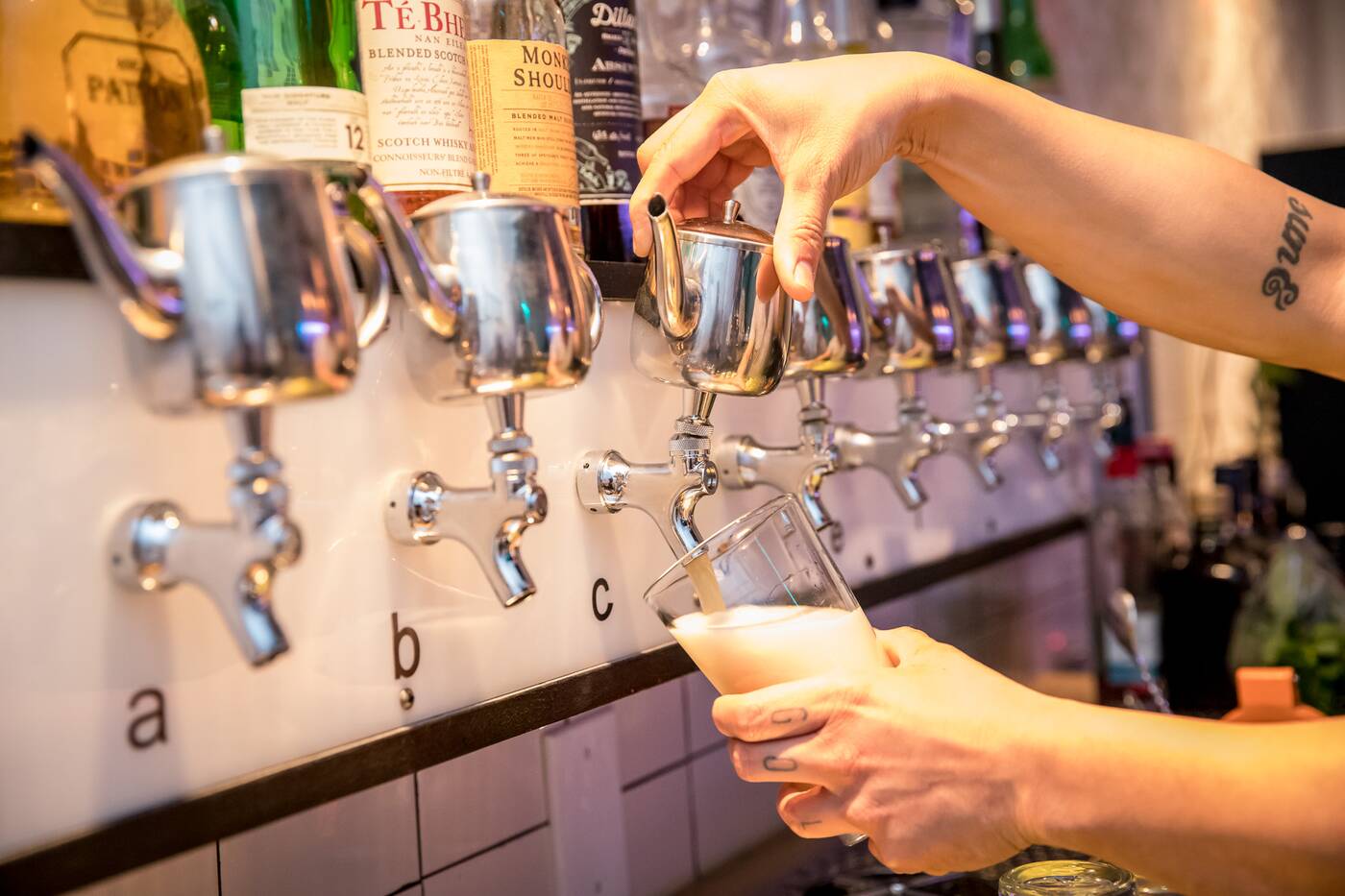 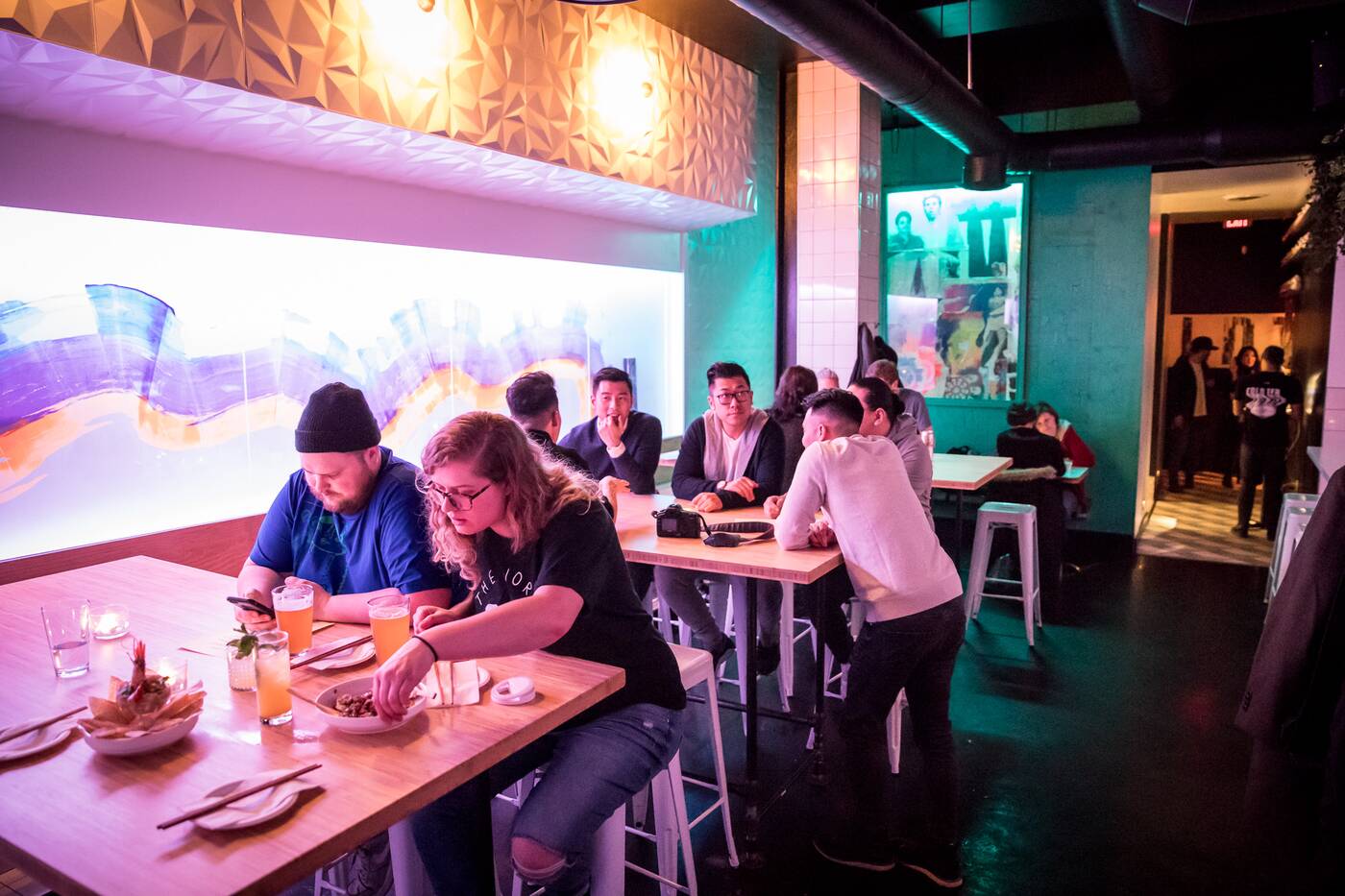 A solid bench runs the length of the wall with the art installation, providing part of the seating for bulky communal tables surrounded by metal stools. There’s also seating at the bar. 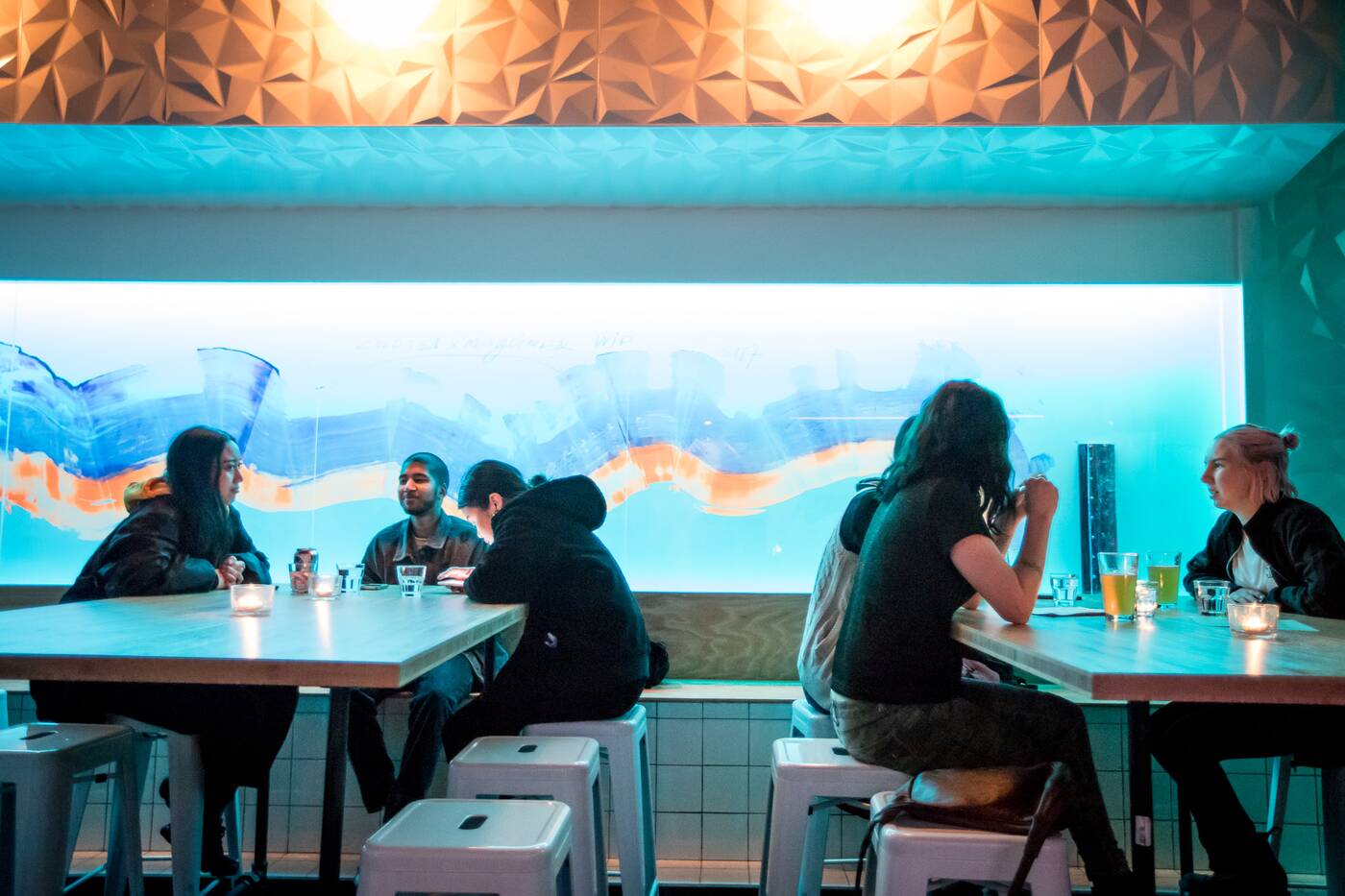 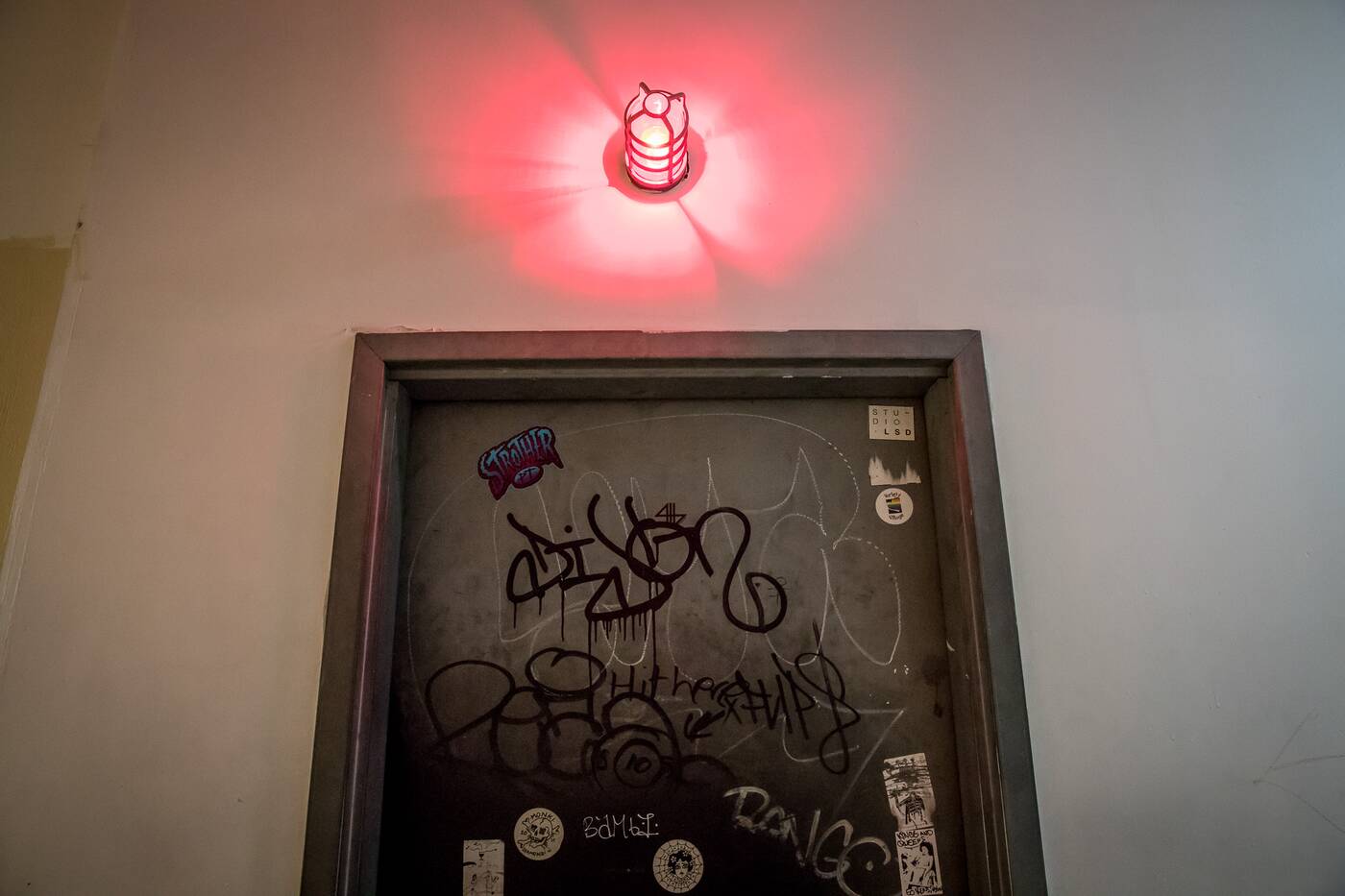