Strada 241 had its soft opening, with minimal fuss and fanfare, a week ago, and is something of an odd man out on its stretch of Spadina. What's even more unexpected is the two men at the helm: Michael and Guy Rubino, whose previous ventures include Ame (on which they partnered with Charles Khabouth ). 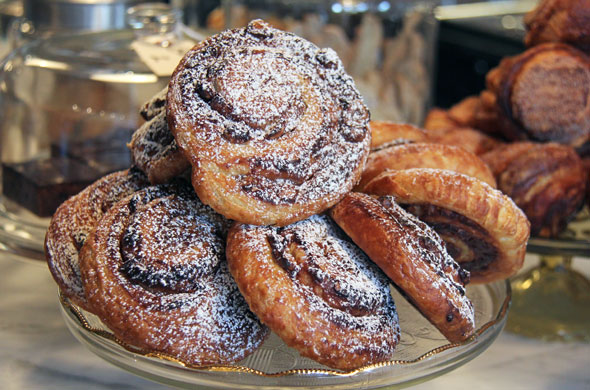 "Strada, for us, means fun and accessible," Michael tells me. "This is somewhere we feel comfortable." And comfort is clearly important to Michael, who's had children recently, and Guy, who divides his time between the kitchen and putting the finishing touches on a record for his band, Curtain Call . Wondering why Chinatown ? "It's changed," Michael explains, "and we don't want to be a King and Bay kind of crowd. Ossington has had so much happen; we're of the opinion that it's coming this way." 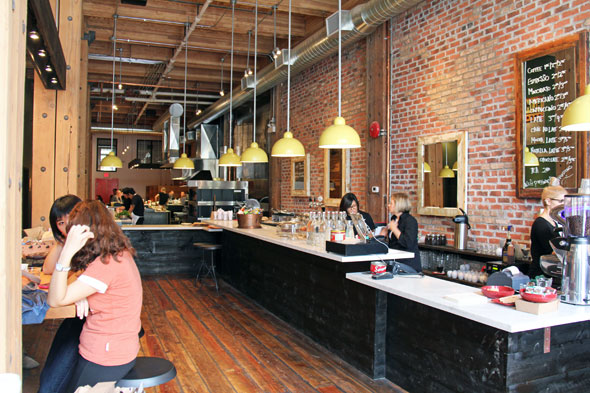 The space is beautiful, and builds on the bones of the original space, which was constructed in 1910 and was formerly a "by the hour" hotel, Michael tells me. The wood flooring has been coated and sheened, but its years of scuffs and marks are still in evidence, as is the fire damage on the ceiling in a back corner.

The layout is ingenious, and serves Strada's multi-purpose concept. High ceilings throughout lend an air of haute cuisine, but rustic accents of wood, marble and steel bring it back down to earth. 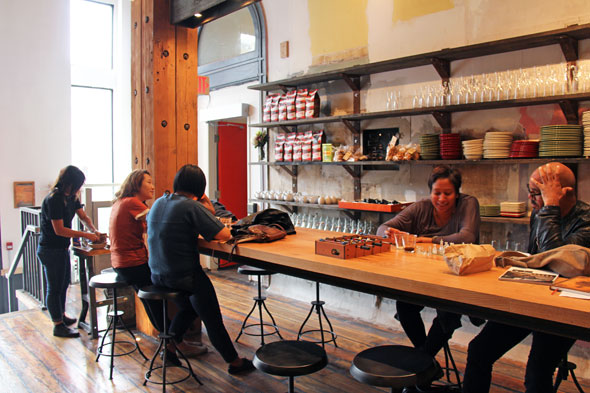 They open at 7 a.m., and see a rush at their front cafe, which serves traditionally-prepared espresso-based drinks and freshly-baked pastries. There's a long communal table which has already seen its share of lunchtime laptops, a homey brick wall, and a spill of natural light. The middle area consists of the ultra-open kitchen--yes, ultra. There are no doors or walls, and there's even bar seating surrounding the kitchen area. In short, nowhere to hide. 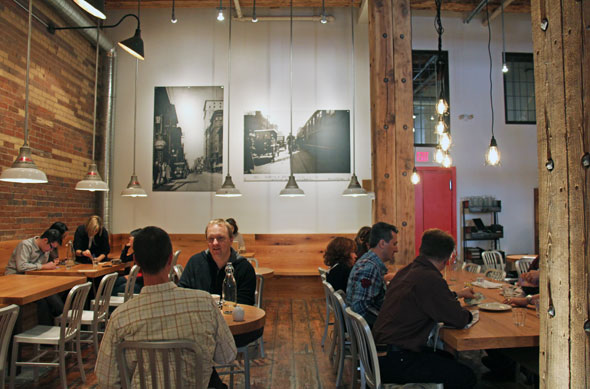 The back area is the designated dining room, but opens at lunch: polished, blonde wood throughout, and high-walled booths lend an air of intimacy. Once their liquor license comes through (projected for next week), this is where the planned menu of simple Italian cocktails such as negronis and bellinis made by Michael himself ($9), Italian and Canadian wines, and European beers will be focused. 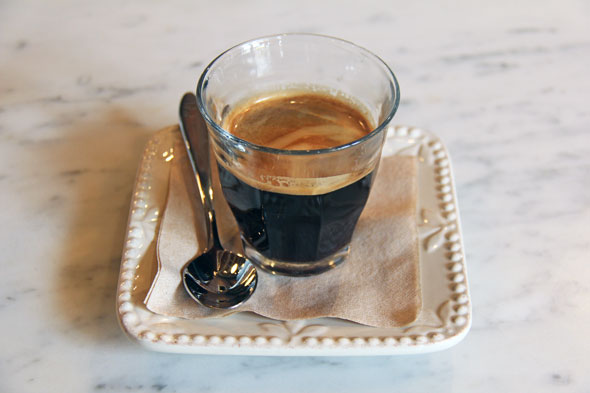 It'll come as no surprise that the Rubino brothers have done it again--the food is incredible. What's a bit of a head-scratcher is the simplicity of the dishes, and the focus on Southern Italian cooking which is, in essence, a return to their cultural roots. After years of polished service and costly mains, Strada is a far more relaxed atmosphere than we've come to expect from the Rubino brothers. Where dishes at Rain would take 9 cooks to prepare, Strada sees a line of four, and there are no comically stiff, white chef's suits.

Everything is made in-house--from the pastries, to the bread, to the sauces--and it's a difference you can taste. The price point, as well, is refreshing. 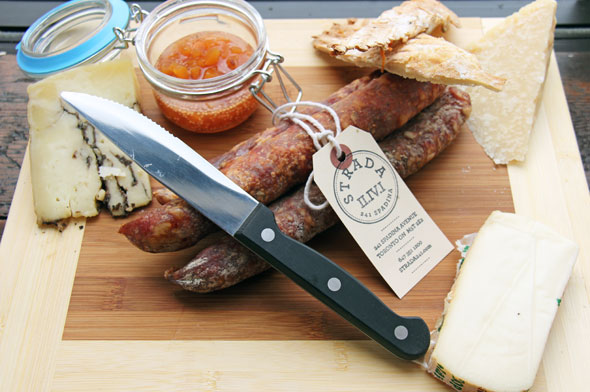 First up is the plate of cured heritage meats ($21). Inspired by something they'd seen abroad, the basket options allows you to slice how much you want and take the leftovers home, or as a pre-sliced option ($12 for 2, or $24 for 4). The meats are seasonal, but there's wild boar sausage, and both spicy and mild soppresatta. The cheese platter ($18 for 2, or $36 for 4) consists of a tough parmigiano reggiano, tallegio (imagine a halfway point between gorgonzola and blue cheese), and truffled pecorino (with black truffles for a touch of earthiness). Fresh bread and a mustard-and-peach chutney round out the plate. 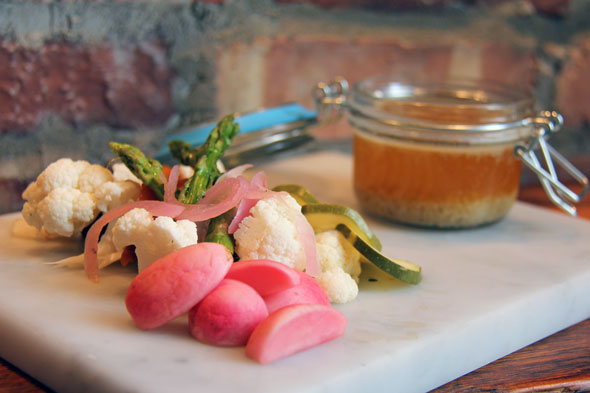 The bagna cauda ($6) falls under their piccolo platti (small plate) menu, and is perfectly sized to share. Chilled pickled vegetables such as cauliflower, radishes, and asparagus are cut to pair with the dip after which the plate is named--a warmed, spicy anchovy vinaigrette that's a nice way to up the heat on the already zesty veggies. 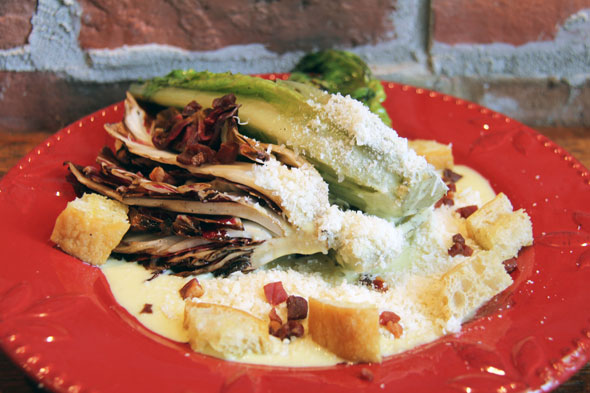 Next up is the Strada caesar ($9). Michael is quick to admit that with Strada, they're not attempting to re-invent Italian cuisine, or even dress it up, and while caesar salads are not especially difficult to make, but Strada's is a stand-out. Charred romaine and raddichio (or grilled on request) is topped with parmesan, crispy guanciale (that's pig cheek in layman's lingo), house croutons, and their housemade dressing. It's the little things: the lingering charred flavour, the slight bite of the dressing, the richness of freshly grated parmesan. No complaints here. 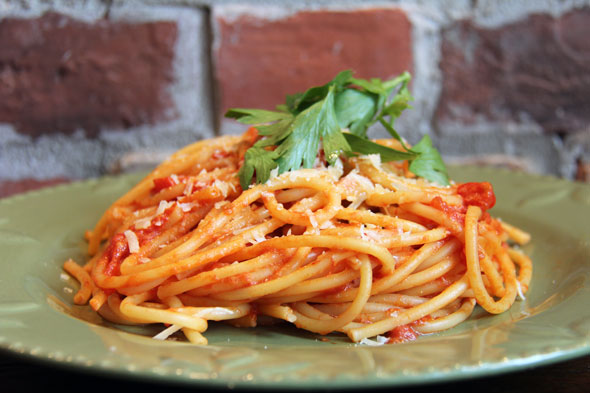 The pasta ($12) is about as rustic as you can get--bucatini with tomatoes, and parmesan. In some ways, this is most reflective of what I think Strada wants to be. It's quality comfort food--no fuss, a bit of heat, and it arrives on a country-kitchen-appropriate red plate.

The Neapolitan-style pizza ($15) is good, from the crust--made with 00 flour--up. Wild boar capicola, Gaeta olives, virgin fior di latte cheese (which means it's the first skimming of the curd, and Guy tells me noone else in Toronto does this), homemade tomato sauce using tomatoes from the Rubino's hometown of Salerno and basil come together in a perfect balance of spice, salt, and richness. "Pizza's pizza," Michael says. "They got it right, and there's no need to put stuff on there that doesn't belong." To that end, the flavors are kept simple and fresh-tasting for each of their 9 pizzas. 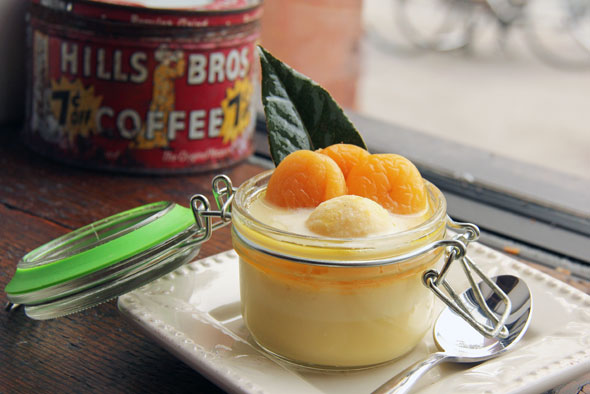 The desserts are the domain of Robert Gonsalves (formerly of Ame). I try the budino ($7), which is a truly masterful blend of vanilla-poached apricots, saffron custard and olive oil which arrives in a mason jar (as so many things do these days), and is the perfect representation of Italian desserts, which to me, are never too sweet. Even their gelato is made in-house, drawing from traditional Italian recipes. Best of all, you can pop in any time for some of their crunchy peanut caramel corn to go. 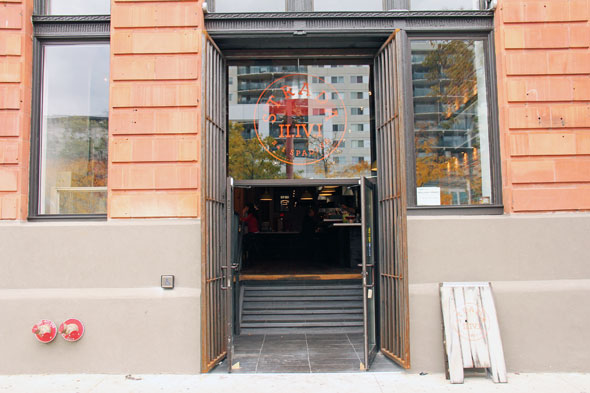