Rock Lobster Food Co. opened up their first proper restaurant on Ossington Ave. just over two weeks ago, and their opening night line-up was just a hint of things to come. Even now, the no-reservation spot is packed to the gills nightly, building on the buzz of the original pop-up restaurant concept from chef Matt Dean Petit, as well as the success of other pop-ups turned restaurants such as La Carnita . "We're all together in the same sort of family," Petit says of La Carnita's Andrew Richmond. 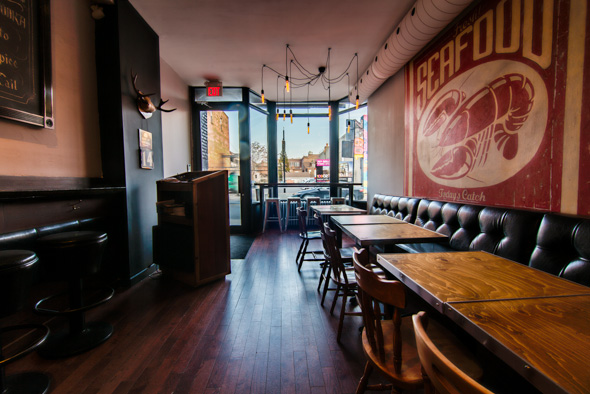 Rock Lobster Food Co. has taken over the former Watusi space, and kept on some of the original ownership as partners. Staying true to its name, and its TUM -favorite food items, the restaurant sports a concise lobster-focused menu that takes lobster off of its white-tablecloth and silver platter pedigree, and puts it into such high-meets-low dishes as lobster poutine ($13). The prices also reflect this, with most items ringing in under $15, unless you choose to opt for one of the towers (two or three tier platters) or the lobster supper ($39). Petit also offers a raw bar which includes oysters from Oyster Boy , and the lobster is sourced from Nova Scotian fishermen, and when it's fishing season--as it is now--your lobster may have been in the ocean just hours before. 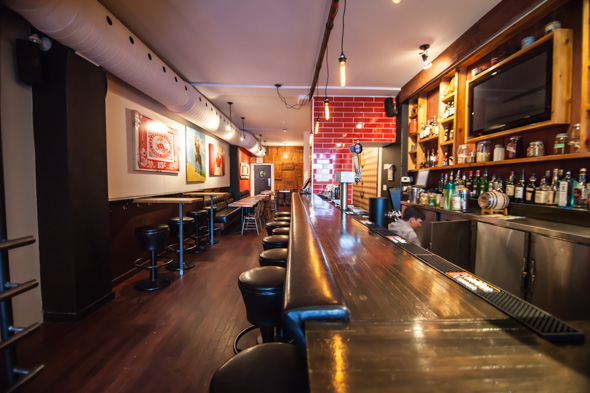 Petit has re-imagined Watusi's old look as rustic wood Canadiana atmosphere of his re-imagining is definitely evocative--and Petit designed it himself. The wood tables were custom-made, the vintage red-and-white mural painted by his father, and the shipping crates bought in bulk from a seafood restaurant's going-out-of-business sale, which have been puzzle-pieced together to create a back wall, were his idea--"I knew if I was going to be here 10 hours a day, I better like it." He also commissioned artist Mike Spazz to create a trio of paintings. Ergo, a stamp, a mountie, and the Canadian flag, as per Petit's specific instructions. There's also a semi-private dining alcove dubbed the Anchor Room which somewhat holds a 10-seat table. 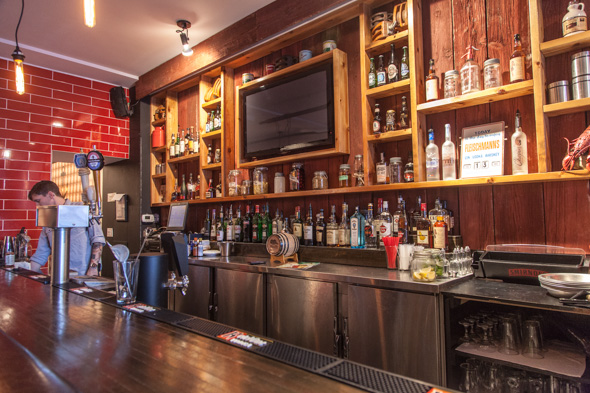 You'll find draught beers like Guiness as well as Vineland Estates wine on tap (just $1 per ounce). Petit tells me they're the first Canadian restaurant to pick up the wine on tap account, and the McEwan group of restaurants are close on his heels. The cocktail program comes courtesy of Josh Lindley (of Campagnolo ) and for the most part omits any nods to lobster--look for the festive Serpent's Fang ($10) which marries Bulleit bourbon, Dujardin's brandy, baked apple bitters, and apple tincture. 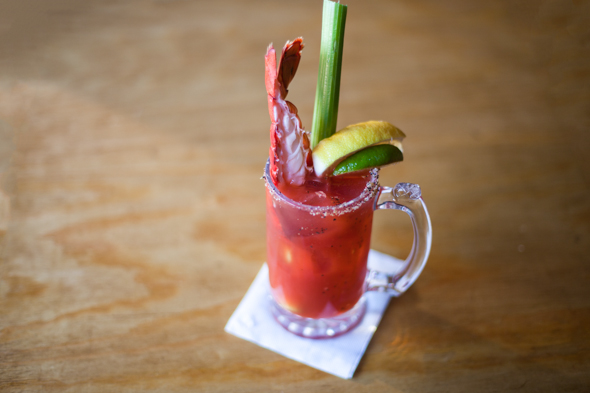 However, Petit's own contribution is the Rock Lobster Caesar ($12) which sees Ketel One vodka, tabasco sauce, worcestshire sauce, steak spice and Clamato tossed into a large glass mug, and garnished with a lobster tail. As with any Caesar, it's hearty and well-spiced (although you could probably request a touch more Tabasco), and the addition of a large celery stalk and a meaty lobster tail make for a fitting drink to take the edge off while you wait for a table. 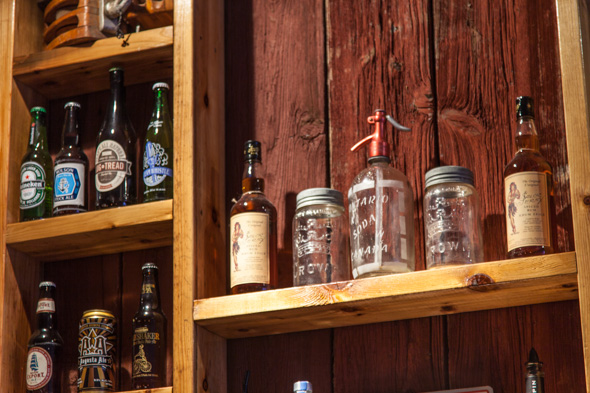 Next up is what Petit is perhaps best known for: the Rock Lobster roll ($14). He aims for complete authenticity, serving up chunks of fresh-cooked lobster tossed in mayo on a soft top-loader bun. The bread's not fancy, but Petit tells me lobster rolls aren't meant to come in brioches, but just good ol' fashioned soft bread. One bite proves his point--a more flavourful bread would compete with the taste of the lobster. It comes paired with hand-made Yukon chips (which are a close competitor for Miss Vickie's), and a slice of McClure's dill pickle (which apparently has a cult following). 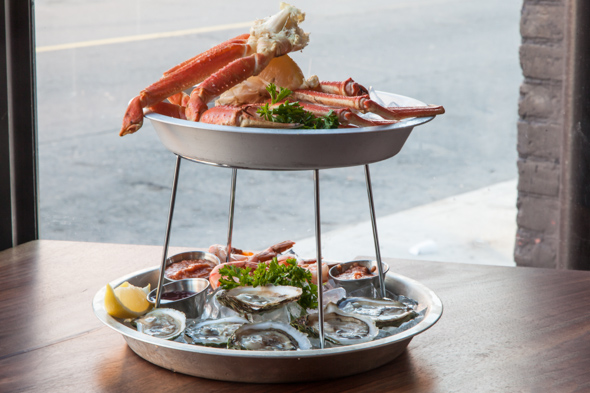 The "Crows Nest" seafood tower ($39) is two seafood platters--tiered for easy access, and more than suitable for sharing. The lower is seafood on ice, such as oysters and shrimps (paired with a red wine sauce, lemon wedges and truly tangy house-made seafood sauce), while the upper is reserved for crab legs.

If seafood is not your thing, you'll also find meaty offerings like the surf 'n' turf steak tartare ($12) and flank steak with fried duck egg ($14) on the menu.

Following from their success at TUM, Petit says "People know who we are and we've already built a sort of base--now it's ours to lose." No worries there.