Ralph's West Indian Delights has been faithfully serving Caribbean food in Toronto for over 30 years and are still going strong.

A few things have changed since the spot first opened by Vashni and Freda Burton on Finch Avenue West all those years ago. 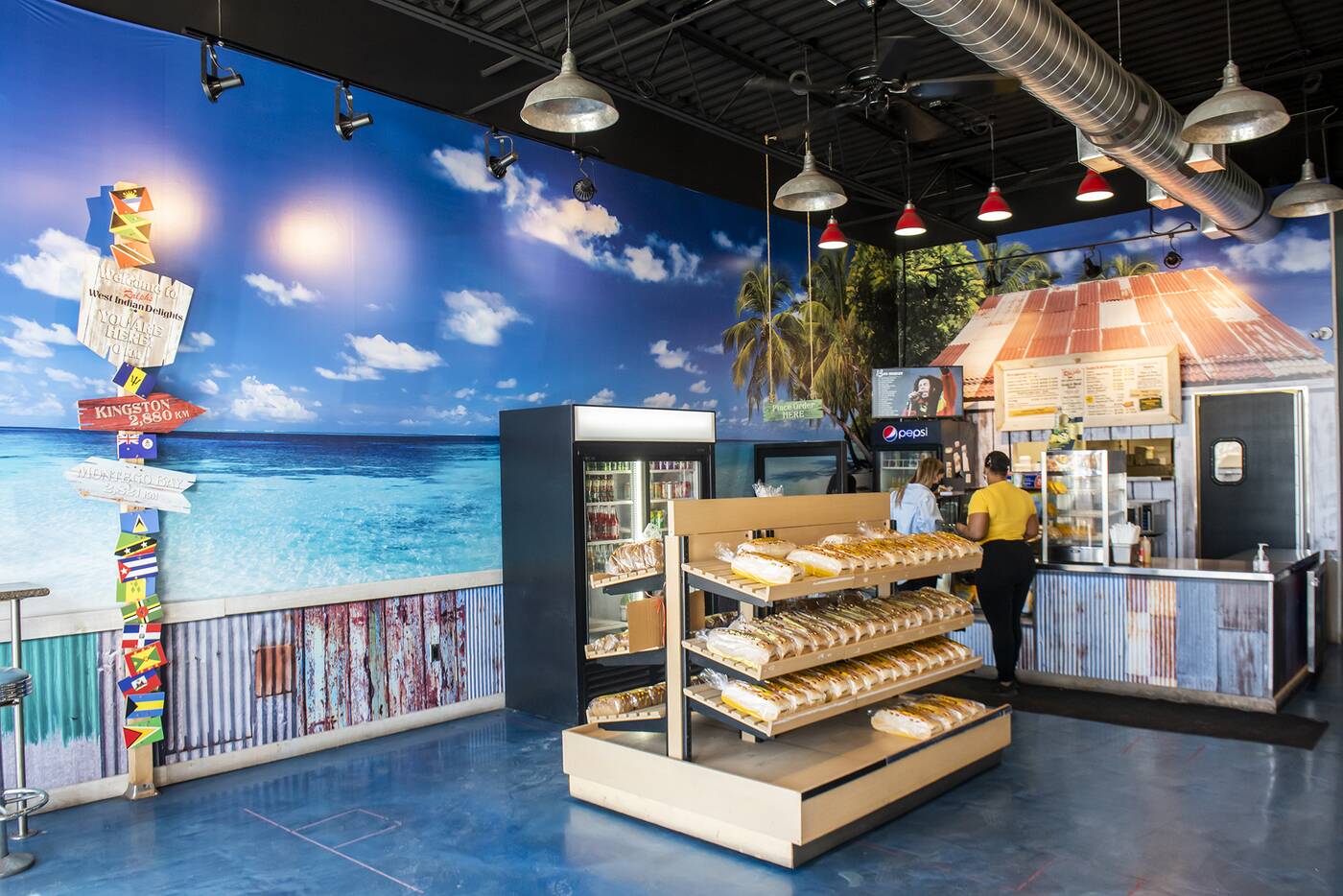 The restaurant is now found in Etobicoke. Though many of their loyal customers have followed them, making the journey to grab a bite to eat at the storefront that's nestled in the middle of a large plaza. 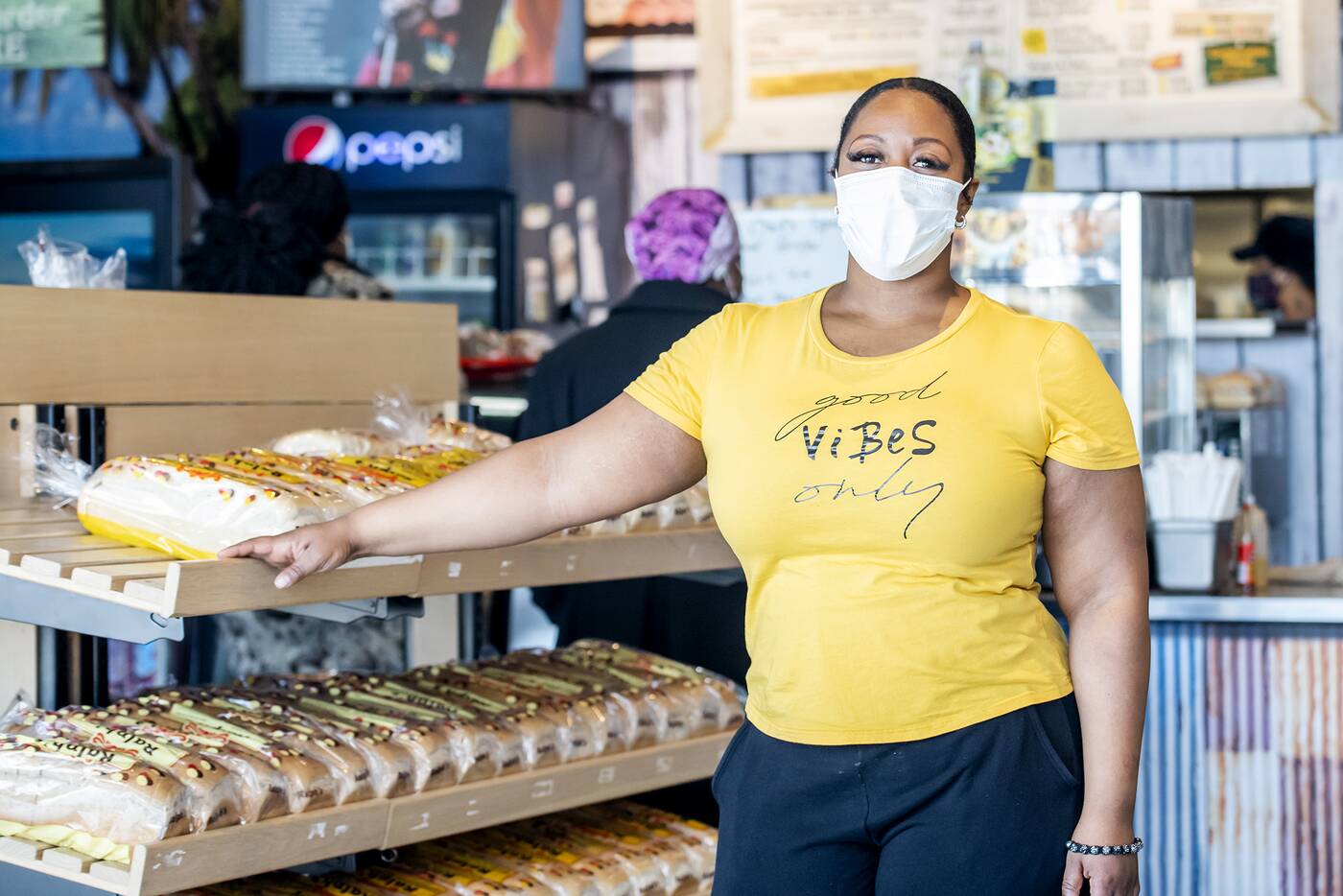 The Burtons also passed the baton unto their youngest daughter, Adrianna, in 2018. Though her master's degree doesn't have anything to do with the food industry, she has grown up in the restaurant her entire life.

Breakfast, lunch and dinner are served here. With everything made fresh throughout the day and put on a hot plate in the kitchen to keep the meals piping hot, orders are up in just a few minutes. 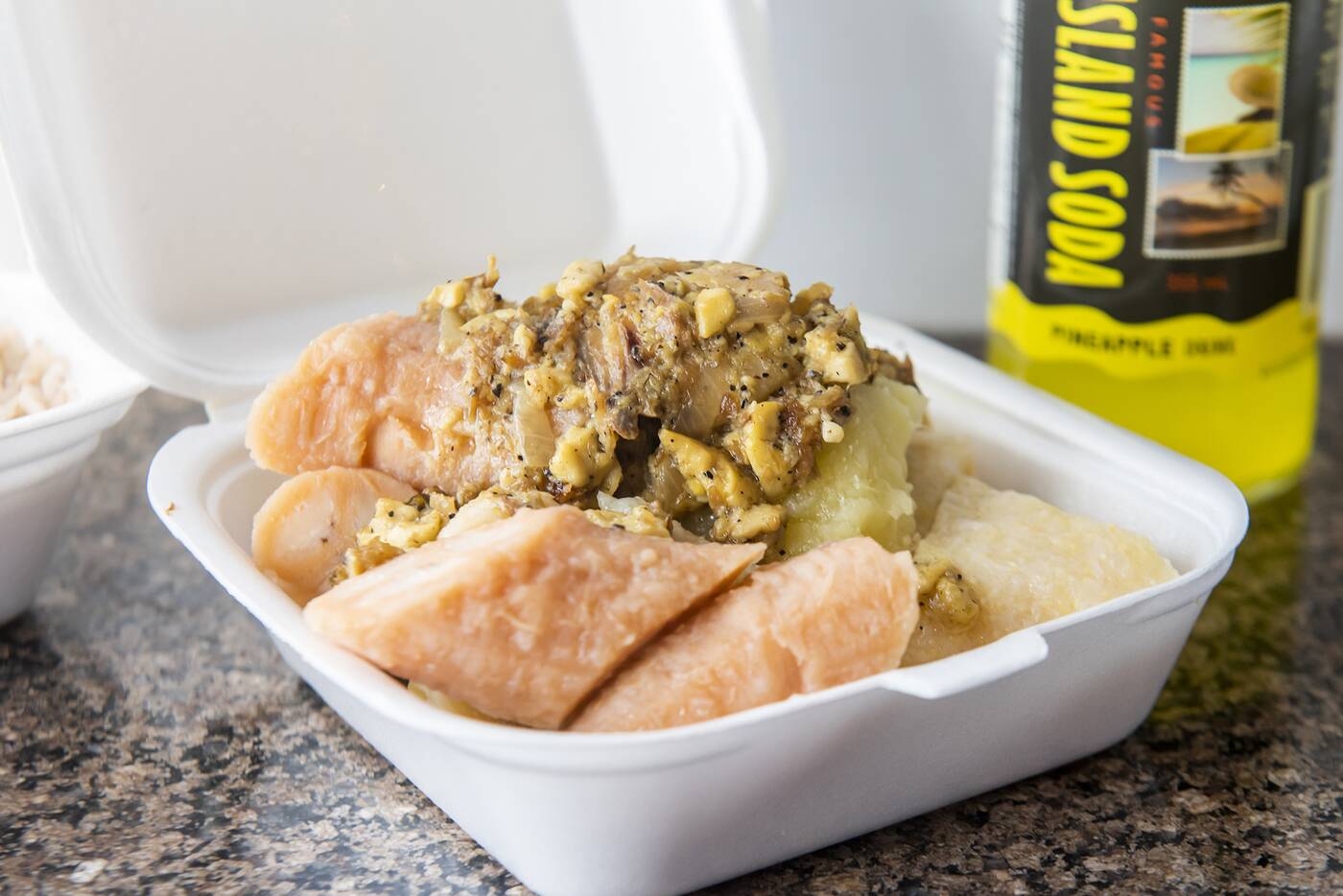 The most popular breakfast is the Ackee & Saltfish (mini: $7.50, small: $9, large: $11), with even the small portion packing plenty of heartiness.

The morning meal consists of sautéed salt cod with boiled ackee, Jamaica's national fruit, piled high on a bed of boiled dumplings (which have a hard dough consistency) and green bananas. 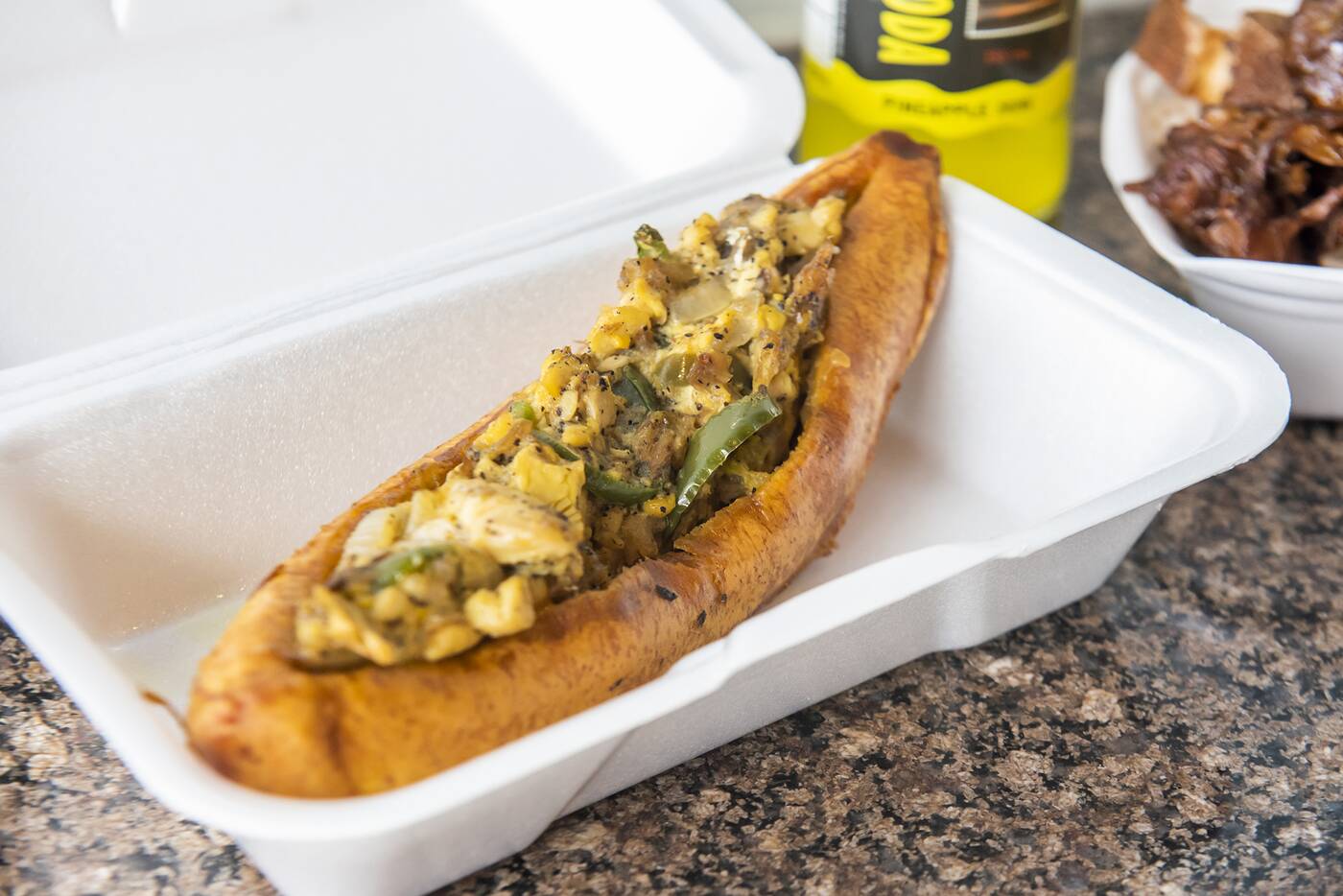 Also sold every morning is the Banana Boats ($5) which can't be found at too many other Caribbean restaurants. The three different varieties sold here are chef D's special creations.

Ackee and Saltfish come packed in a hot plantain that's been sliced down the middle. There’s also a Callaloo and Saltfish and Veggie Chunks option. 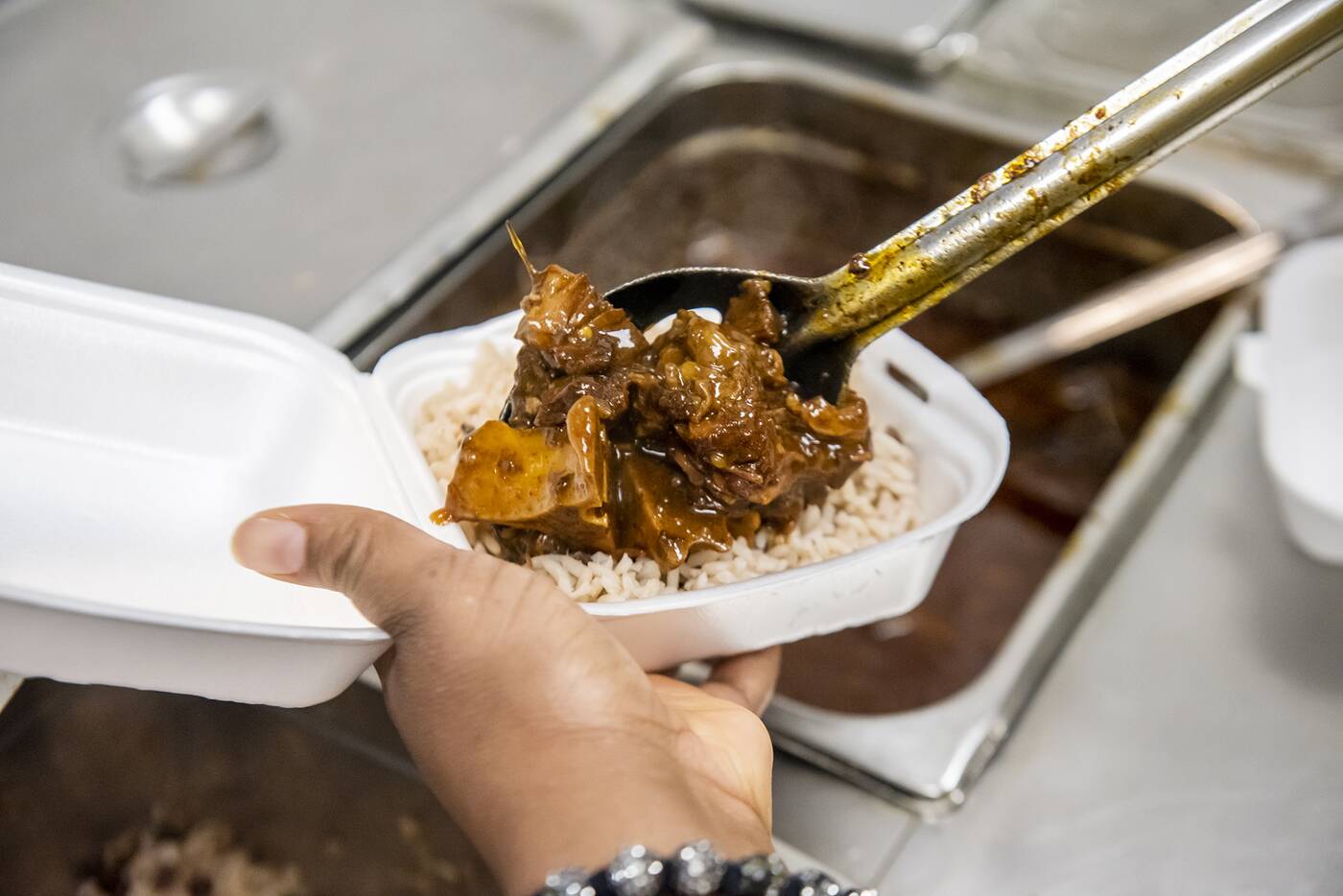 Lunch starts at 11:30 a.m. and offers a lineup of all the Caribbean favourites that are available right through to dinner time, including a tender Oxtail (small: $11, large: $13). 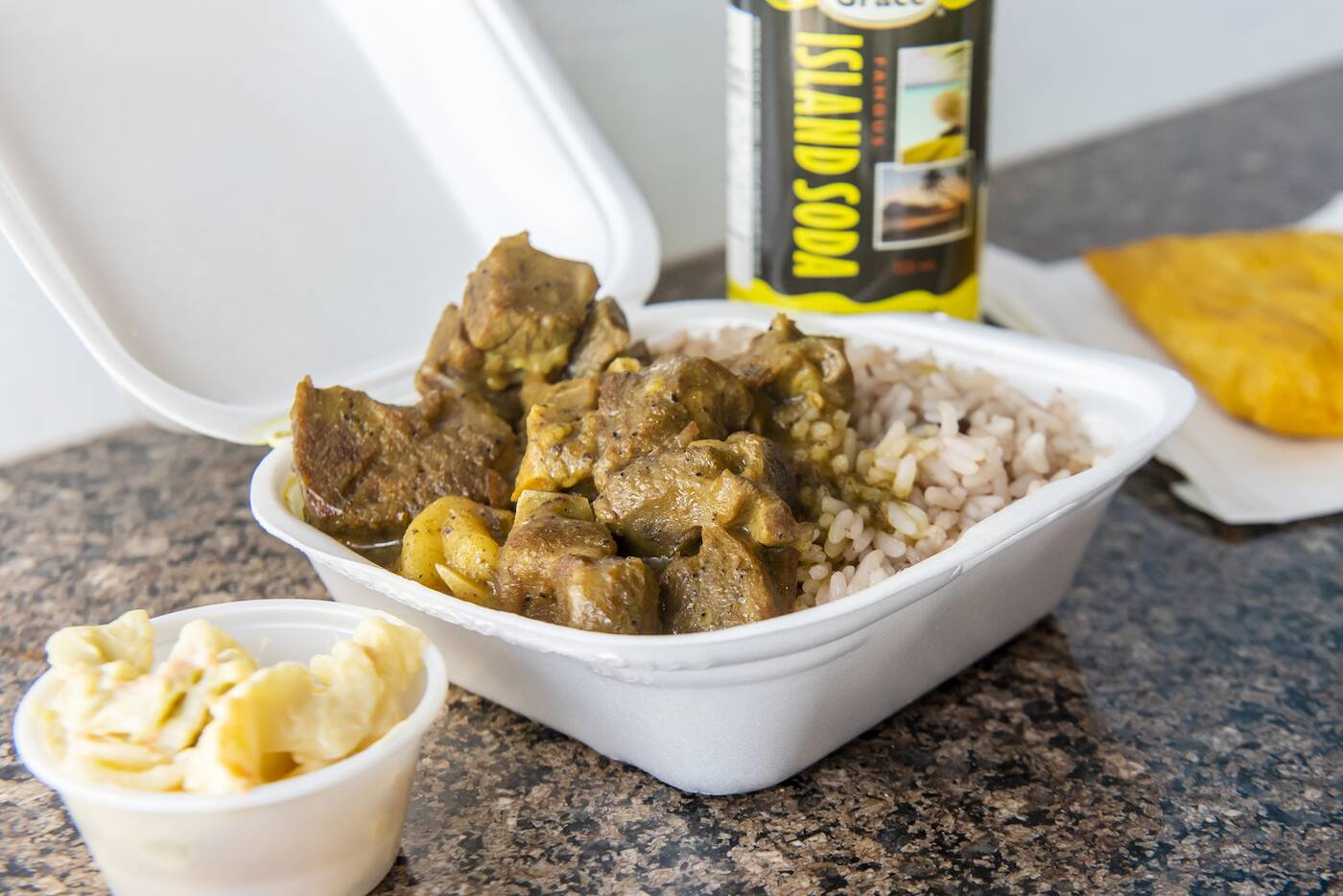 They also have a slow-cooked spiced Curry Goat (small: $9, large: $11) that tends to be runner up in terms of popularity.

Each meal is served with either rice and peas or steamed white rice, coleslaw or cold pasta salad, and an option to add on boiled dumplings, yellow yam and green bananas ($2.50), fried dumplings ($2.50) or fried plantains (four for $1). 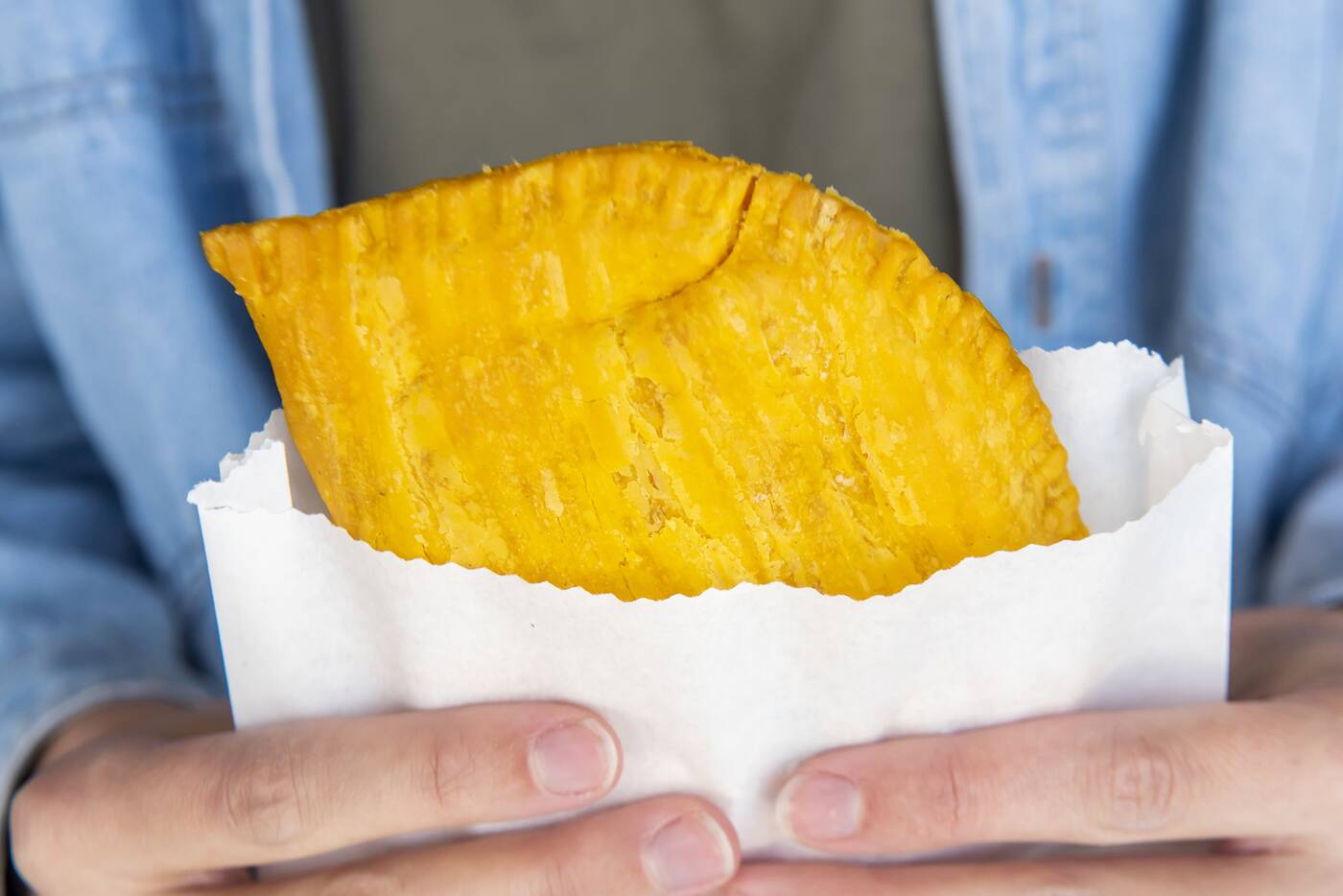 Their beef, chicken and veggie patties have been supplied by Michidean Limited since they opened. Freshly baked in-store, the crust provides a good amount of flakiness, while the insides are more pureed than minced but with unreal flavour. 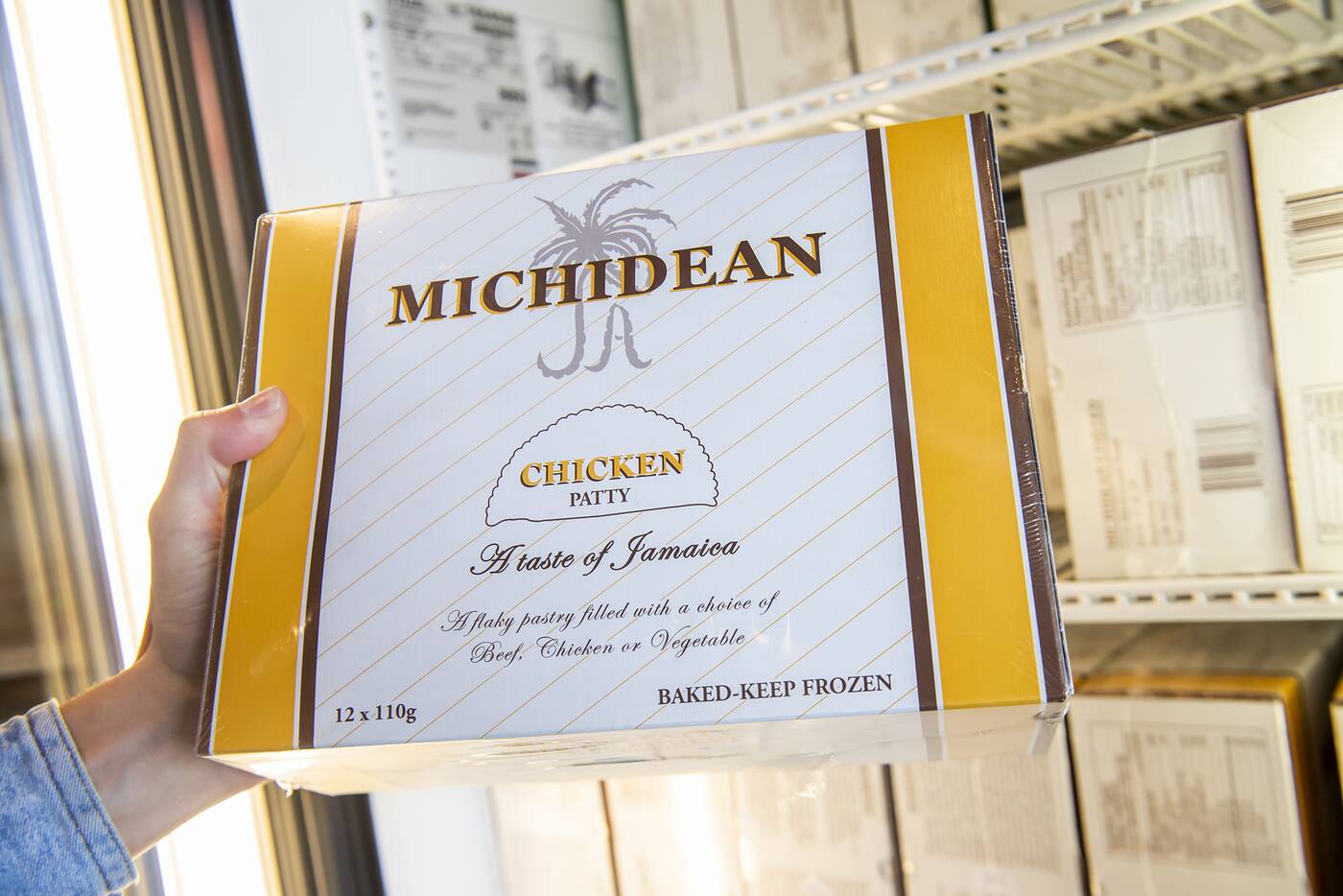 Frozen patties are also sold by the dozen here, with some customers coming in to buy two boxes of patties a day. 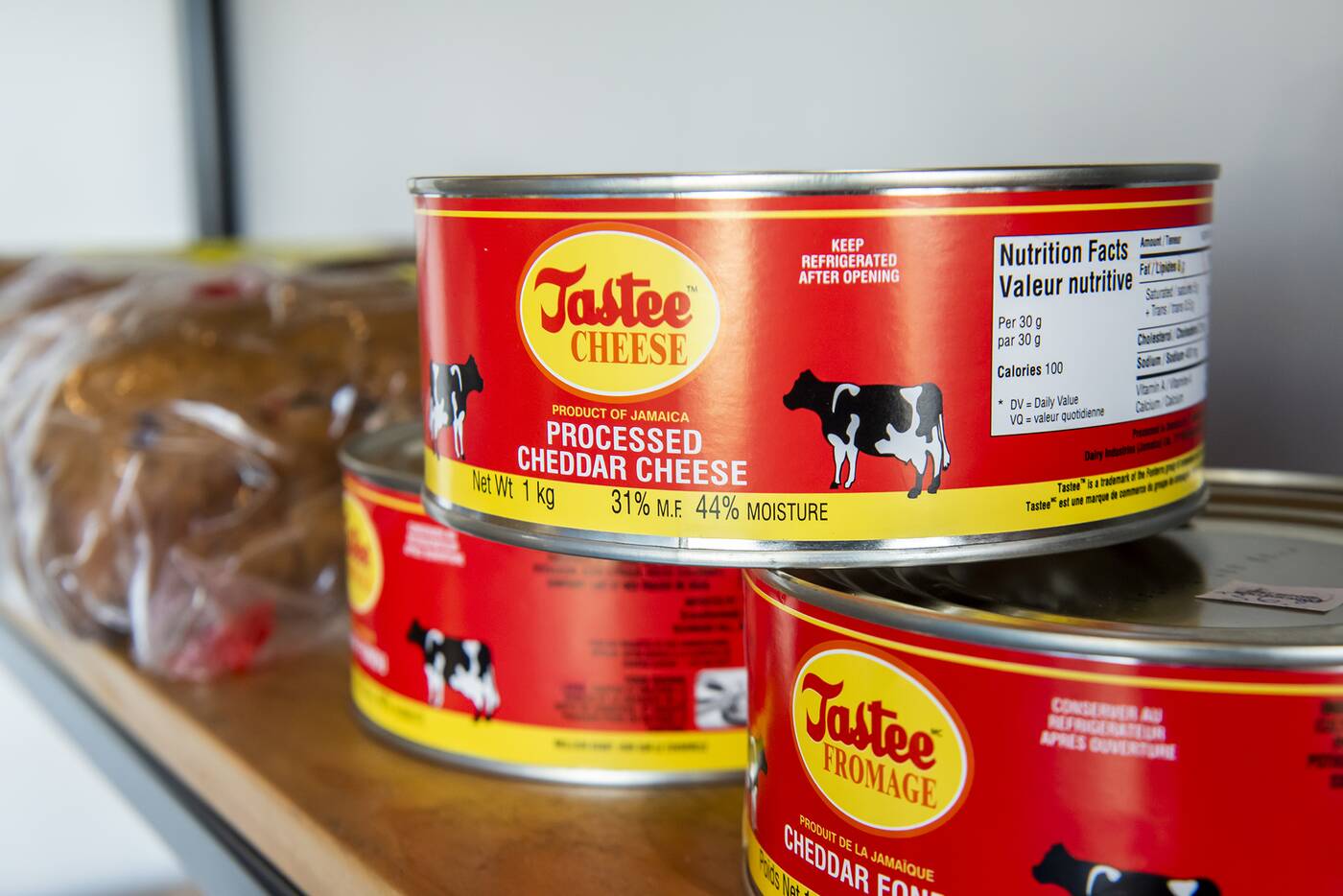 Besides the patty fridge, there's plenty of other grocery items around the place, like all the flavours of Jamaican Coconut Drops and canned Jamaican cheese, which tastes best spread over a spice bun. 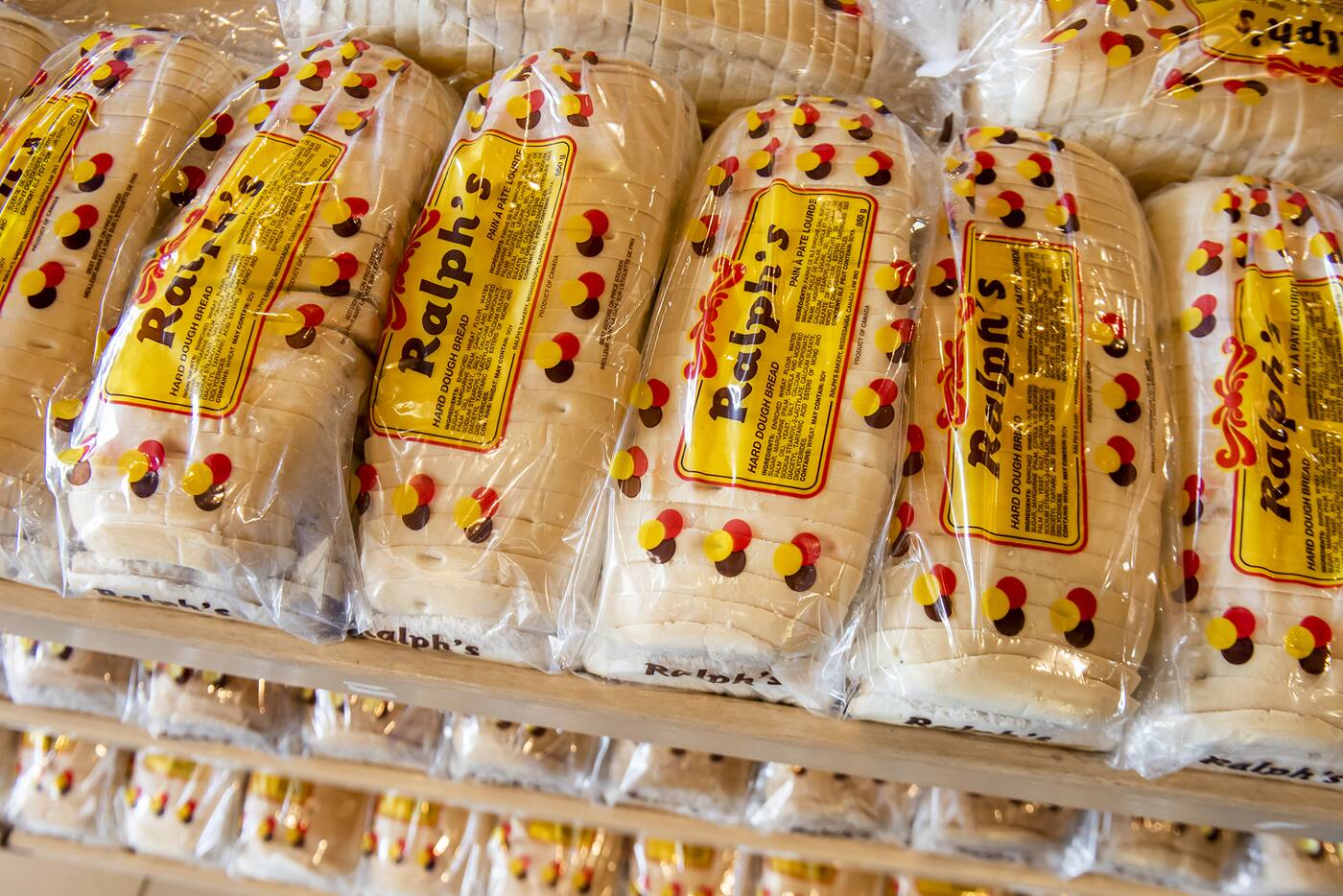 Conveniently, you can also purchase spice buns here as well as hard dough bread and bulla cakes made from Ralph's Bakery, which is a separate business despite sharing a name. The fresh bread has been sold in the restaurant for as long as Adrianna can remember.

Ralph's West Indian Delights is a longtime restaurant that continues to serve up homemade food to its customers, old and new, and the lineups at lunch hour tell all. 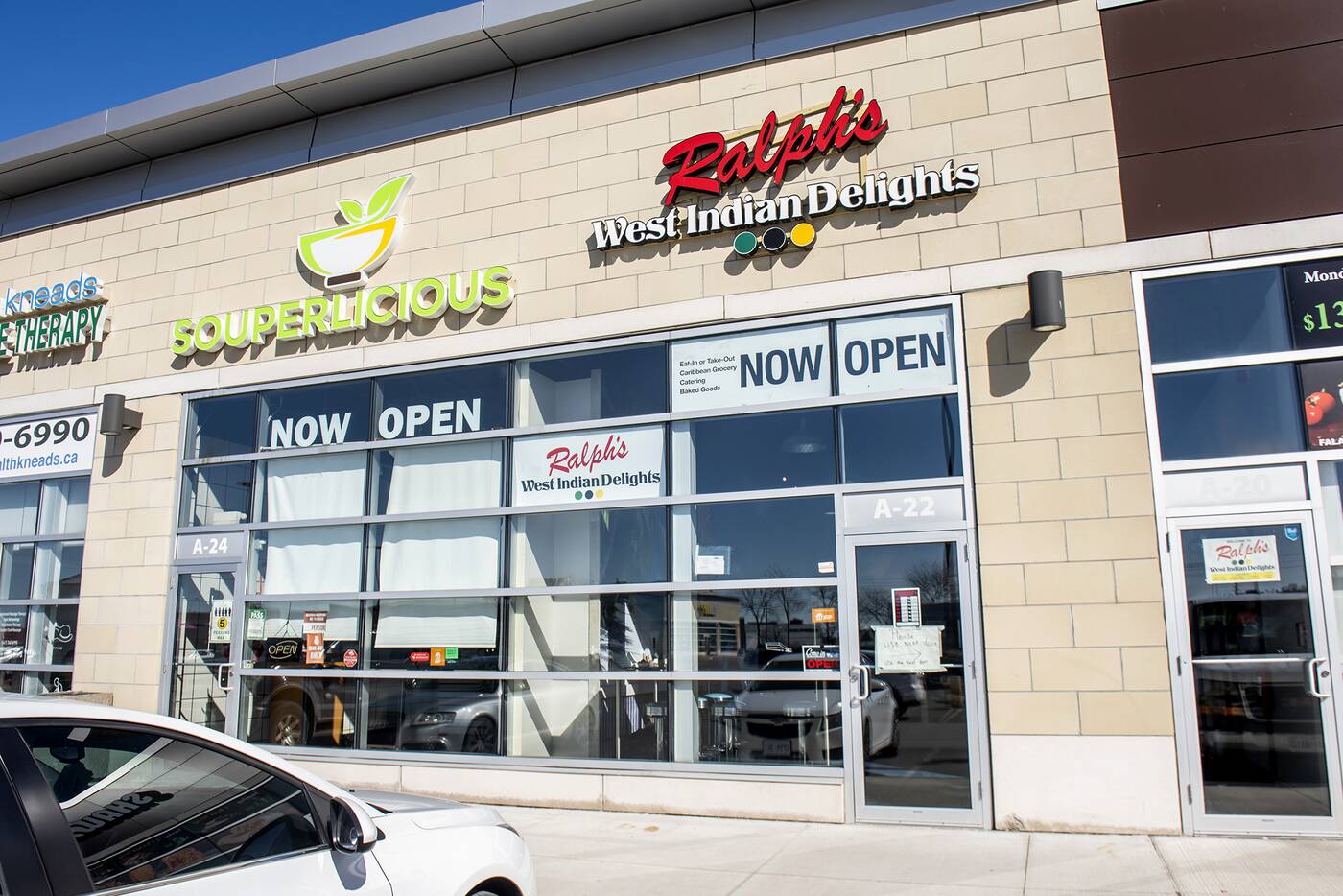