People's Eatery, formerly an unassuming spot in Chinatown , has been given a full makeover thanks to the folks behind the buzzy and busy 416 Snack Bar . Living up to its namesake with ease, the new spot has regularly wooed the walk and talk of the city's most avid food flockers since opening earlier this summer. For good reason, too: bar and kitchen are open till 2 a.m. Bao and beer all night long is some kind of fortune.

If you've been to 416, you know the drill: no cutlery, umami-rich snacking, stiff cocktails, brusque mid-meal seat shuffling. I'm also tempted to peg the eatery's sensibility as somewhere between popular NYC trendsetters King Noodle and Lovely Day - both of which are known for their Asian food, meets fusion, meets neons, meets tchotchkes of yore. Sound familiar? 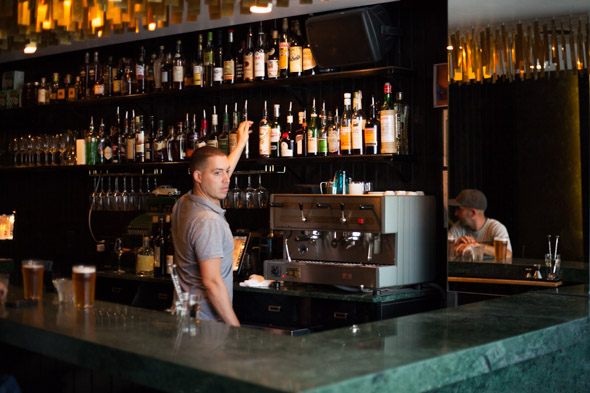 Sure, but that doesn't stop Spadina's old guard from darting iffy stares as they pass. They must think, now there's an odd Peking duck if there ever was one. Do they sense big trouble just a little bit? I'm sure the LONS through ATLiens -era rap on blast all but confirms such suspicions. Yet with Lucky Red now open across the road, Chinatown turf may never be the same. 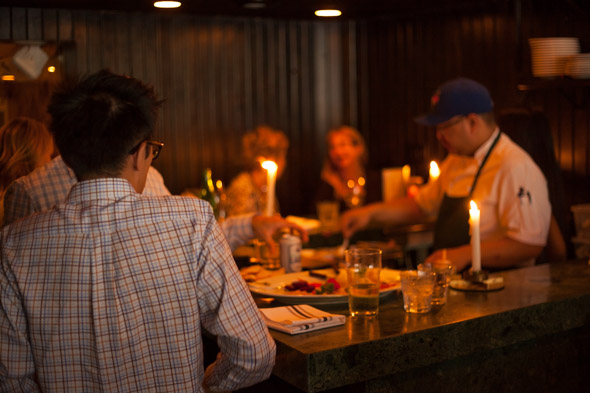 Out with the old, in with the new? Not exactly. If ever there was an emblem, look no further than downstairs - be still, People's neon heart. Stirring memories of Blade Runner , the old sign is more than just a curio. It stands as a vibrant tribute to the past as an inspiration, rather than an embarrassment. 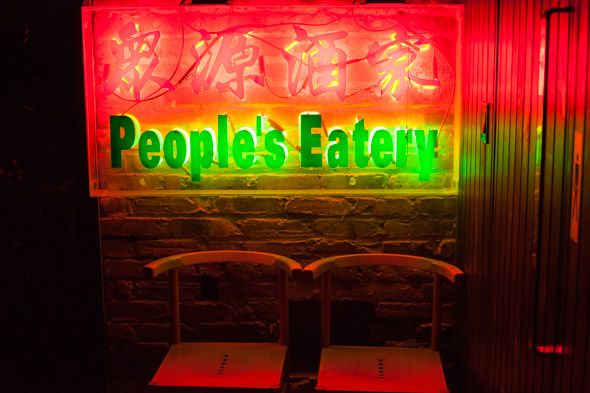 That's all to say, while heritage is no trifling matter at People's Eatery, they approach the matter with equal parts care and irreverence. They've done their research, the menu speaking to the Jewish deli tradition that preceded Chinatown. But they mix and match as they please to tell the street story of Spadina, and to add to that narrative. For them, the cuisine of one's country is sort of a passĂŠ theme. In other words, a menu for the people is their inclusive take. 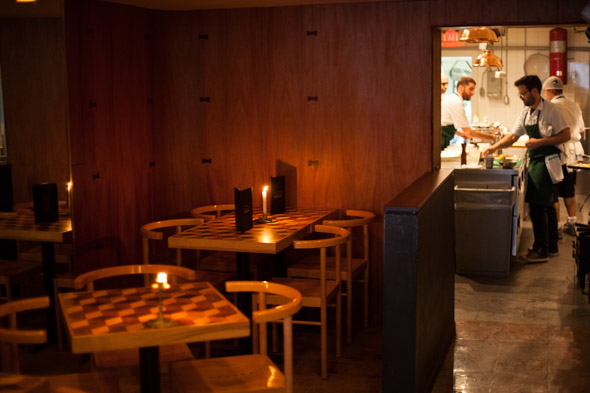 This ethos will be more firmly defined in their upcoming tasting menu that will accompany the upstairs dining room. Within the next week, a set menu each night will pair several courses and snacks with wine, beer or cocktail, and have more of the culturally anything goes mindset as 416. Fun, yet formal and put together, it'll be a unique chance to taste flavours as disparate as Chinese, Spanish, Japanese, Thai, and Italian over the course of the meal. 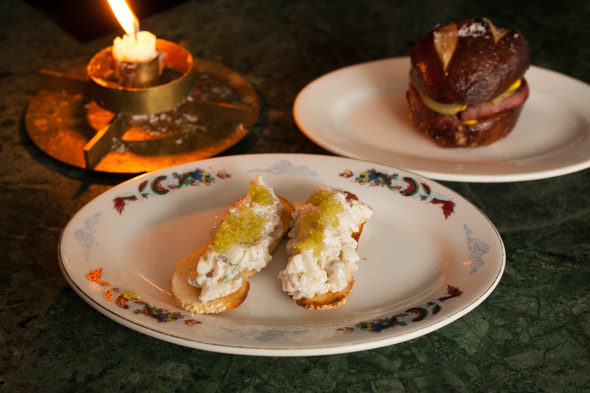 For what they do, it's difficult to find fault with any of their menu offerings. But their Jewish take on apps is especially inspired. To cleanse the palate, revive your buds with the smoked sable whitefish ($6) on sesame crostini, its cleansing factor amped by a healthy smattering of wasabi-cured flying fish roe. 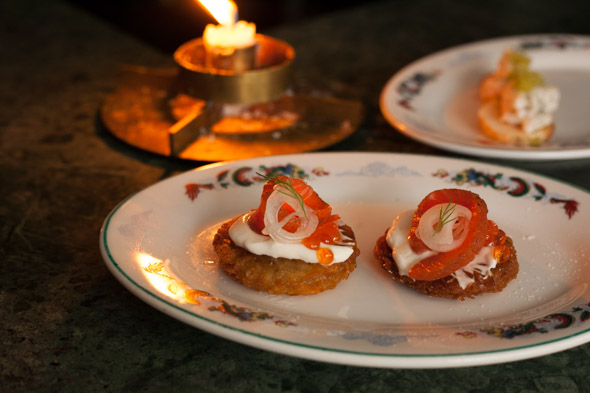 Or nosh on latkes ($5) - a crispy potato disc with cream cheese that boasts fresh salmon roe and trout that's been cured with a pastrami rub. This choice of spice is an obvious ode to deli flair, but it also gives the fish a more complex profile that I didn't expect to be as pleasing as it was. 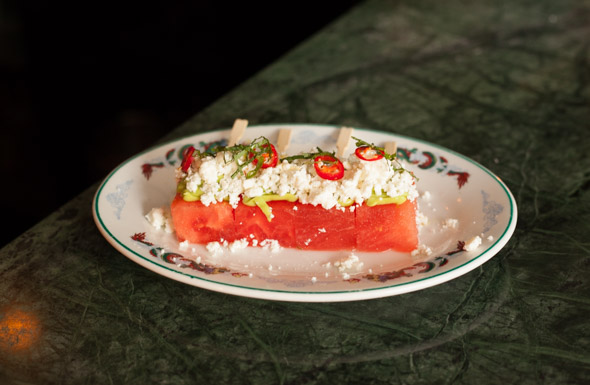 The watermelon salad ($5) is a popular point of entry, each cube speared with a popsicle stick; all the better to balance the layers of avocado, feta, shaved hot pepper and mint. 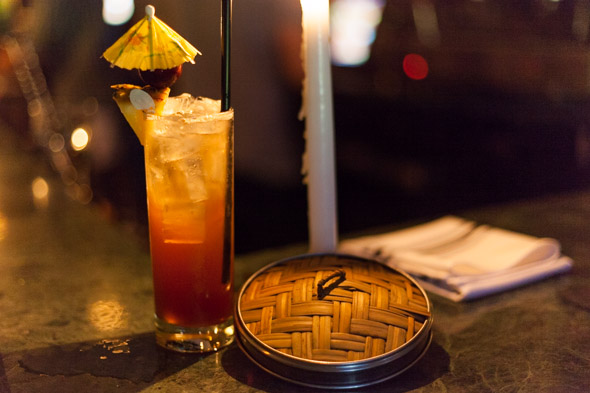 You'll likely want to try a cocktail or two, and my pick would be either the Spritz ($13) or Pisco Collins ($13). The former uses a strawberry-infused campari, the latter a Chilean version of the liquor. The calimoxo - a mixture of house red wine and coke is quite tasty, but perhaps better later in the meal or as a nightcap. 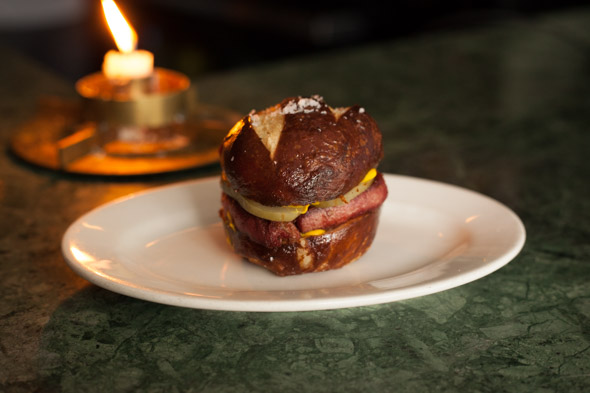 For its nibbly size, the fried tongue sandwich ($7) is a glorified slider. The price may be up there but it's a perfect three-biter you'll order every time without fail. The baos and breads are arguably slightly better over at 416, but its pretzel bun is a plain delight - a salty and subtle cushion - perhaps only rivalled by the one at Farmer's Daughter , way, way yonder. A crisscross of pickles and French's mustard weds the snack to a staunch equilibrium that hints at genius despite the base simplicity of the thing. 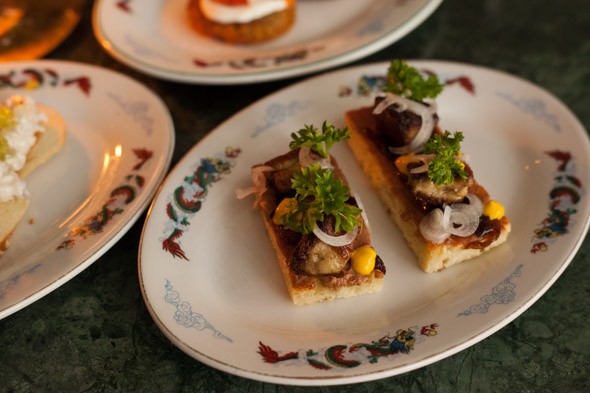 One standout was the chopped liver delite ($9). The priciest of the snacks, it also packs the most savoury depth. A lush whip of chicken liver mousse is spread on airy challah and topped with delicious morsels of foie gras. Keeping it from being too rich is a dab of mustard, scallion and parsley. 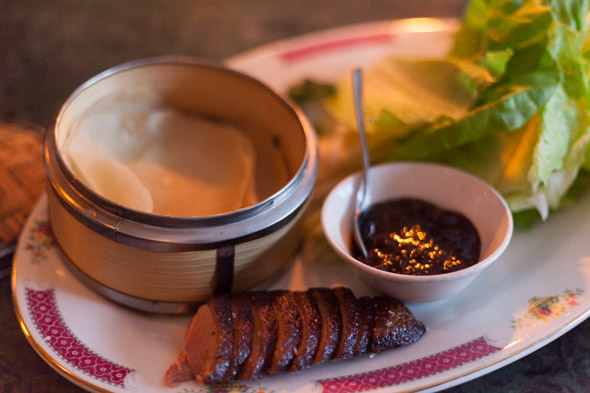 Peking duck is something my family reserved for special occasions. As a matter of decorum, the duck would be wheeled out on a cart by the chef, shaved with a cleaver. Afterwards, the duck would return to the kitchen and a parade of dishes would follow, no part of the duck going to waste. 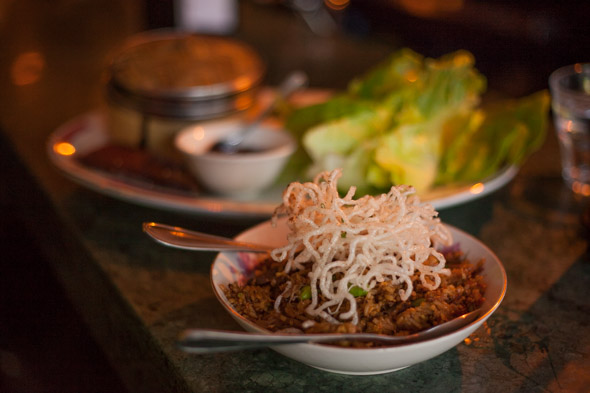 People's waives this ritual but for the most part doesn't disappoint ($25 for two; $40 for four): crispy and aromatic, the duck breast is leaner than expected but nonetheless is thoroughly tender, smoked as opposed to roasted - the traditional method. The best part of the dish of course is the fun of mixing and matching. For this end you get the traditional flour pancakes as well as lettuce wraps. The duck confit fried rice was a welcome update, topped with a frazzle of petrified noodles. 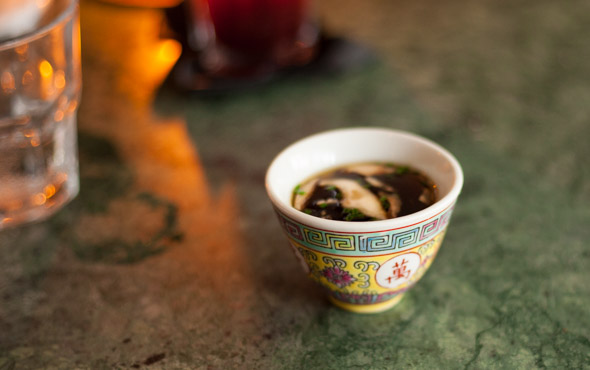 The only minor misstep was the duck consommĂŠ which seemed a bit puny and out of place, arriving solo before anything else in the equivalent of a yum cha teacup. If the rest of the dish isn't staggered, why this one? In a brave move, however, they forgo the hoisin sauce for a house broad bean paste and dried mandarin orange peel. The salty-sweet concoction pays off. You'll be tempted to swathe the fried rice in it, or eat it by the spoonful. 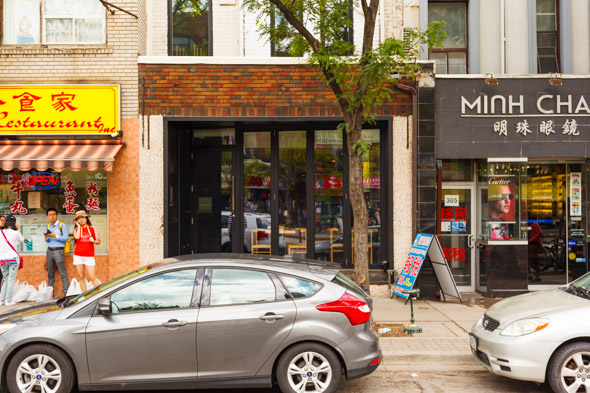