Dumpling House Restaurant is currently open but their offerings and services may be affected due to the pandemic. Please contact the business directly for more information about any changes. Is this your business? Please contact us if you would like to update this message.

Since opening in 2005, thousands of customers, locals and tourists alike, have squeezed into the narrow entrance of Michael Sun's restaurant on the Spadina strip. 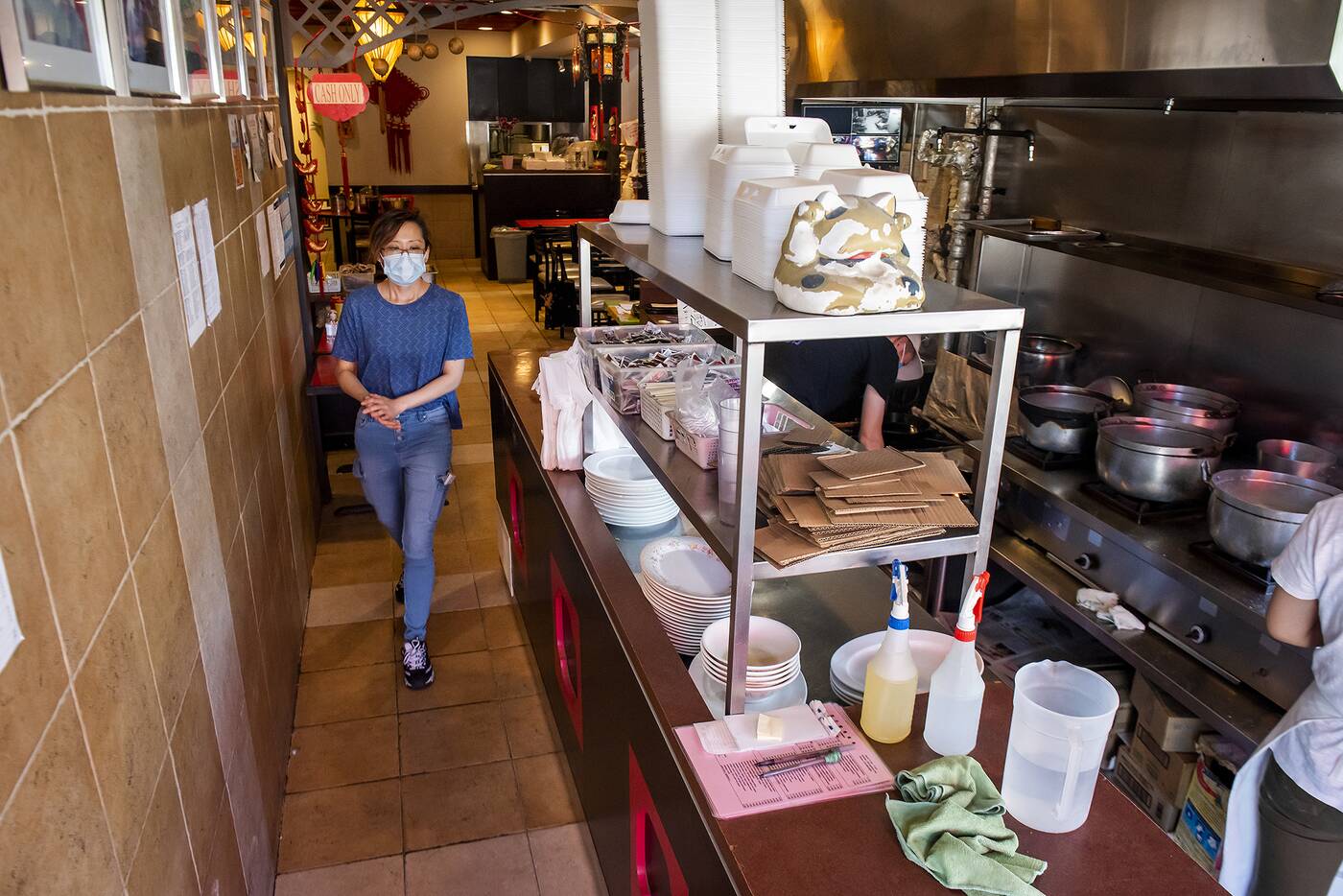 Over the years, Dumpling House's menu has grown from eight items to 88 options, ranging from hot and sour soup to General Tao's chicken.

But it's the promise of dumplings, foretold by the alluring sight of staff rolling, pleating and filling flour-dusted wrappers through the restaurant’s tiny front window, that keeps people coming to this red-painted dining room in Toronto's west Chinatown. 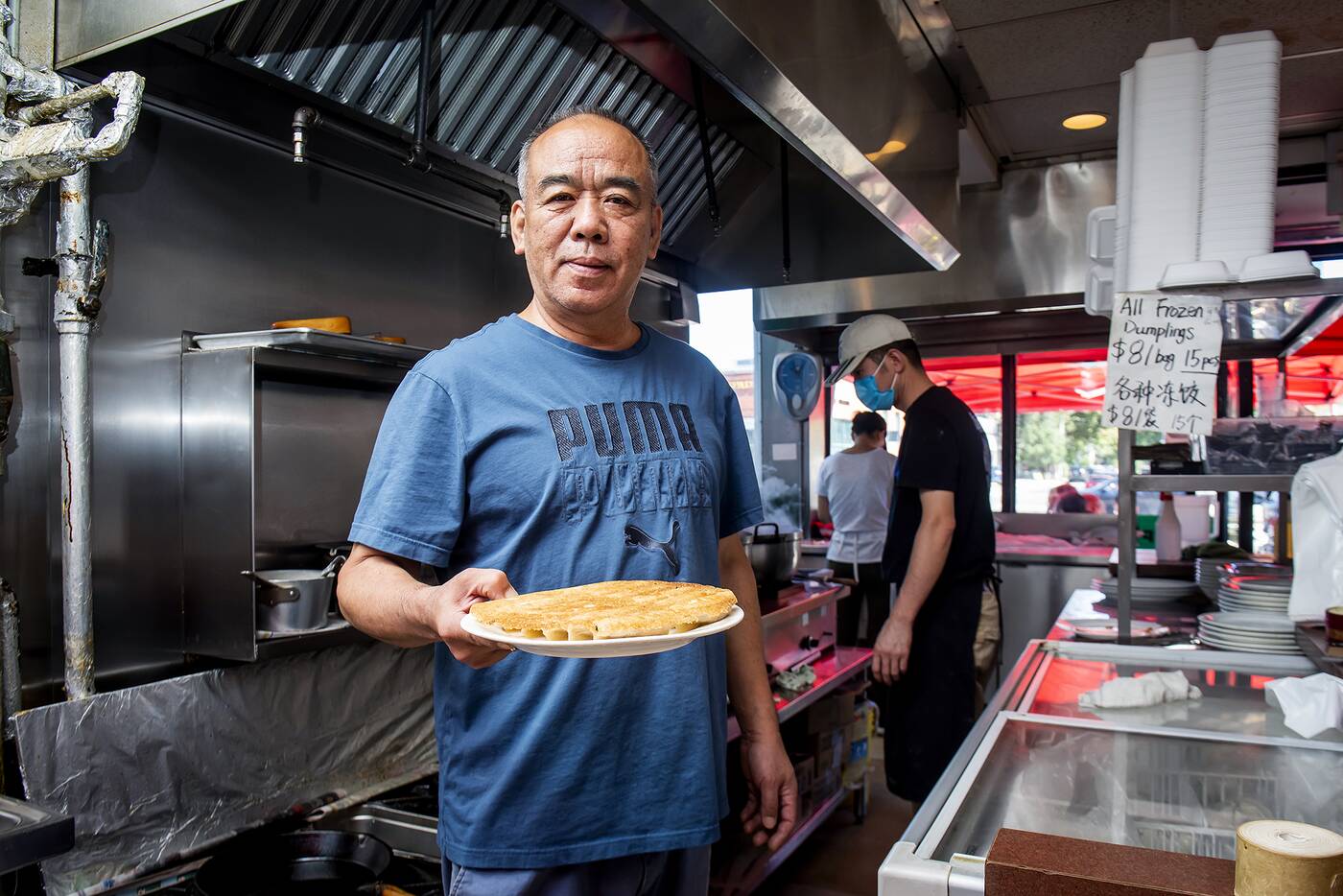 Anyone who has eaten their way through the neighbourhood can recognize a plate of Sun's fried dumplings on sight.

The signature skirt of fried lace, connecting each dumpling like a delicate constellation of perfect, golden crisp, is unmistakably unique. 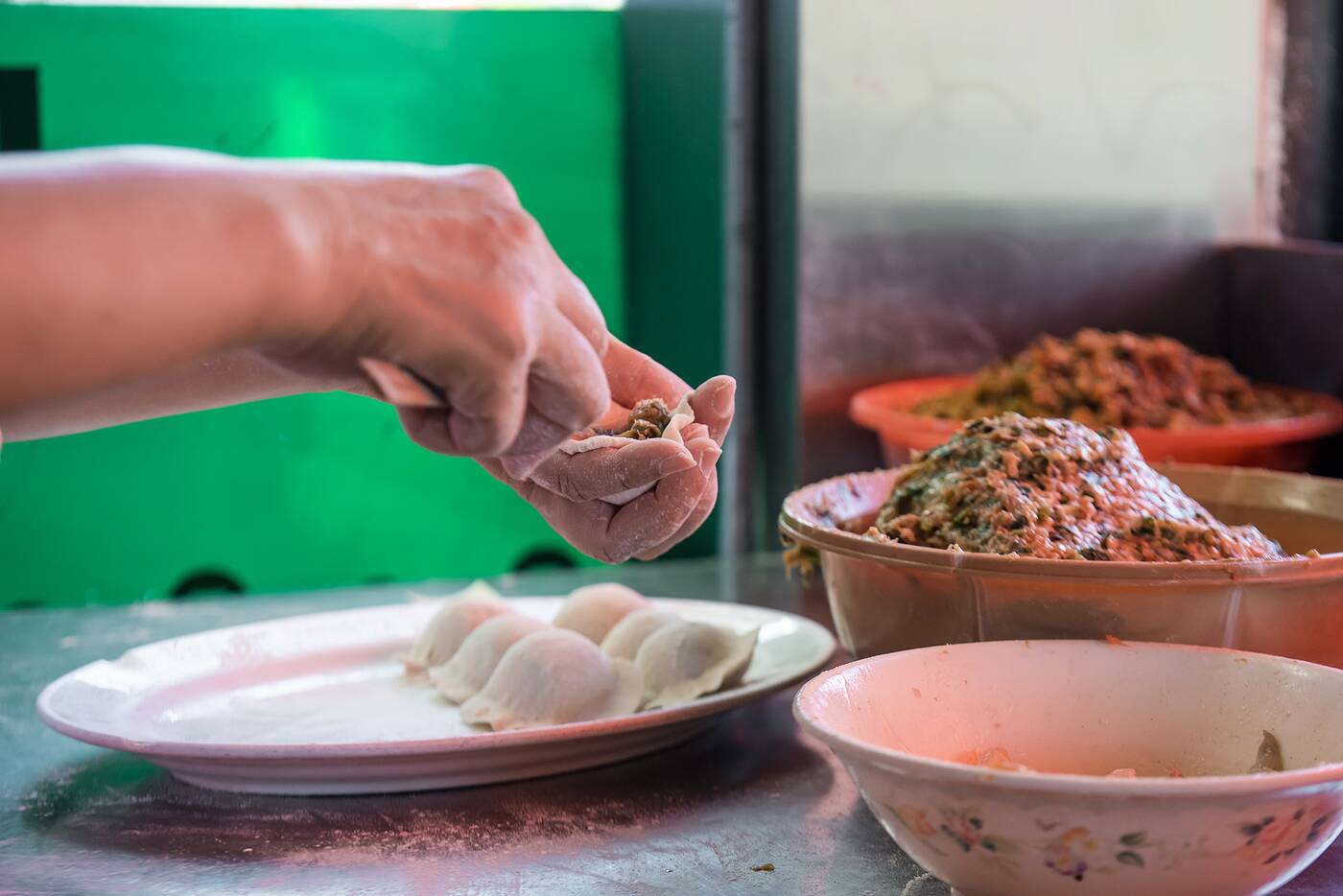 When Sun first arrived to Toronto in the early 2000s, he noticed a shortage of dumpling restaurants in Chinatown, where Cantonese menus dominated before the influx of Tianjin-style eats we see today.

Despite being a career academic with no restaurant experience, he decided to take over the empty unit at 328 Spadina Ave. with his wife Hongxian Zhang.

"It was just a stupid idea that jumped to my mind that led to a stupid decision," he laughs. 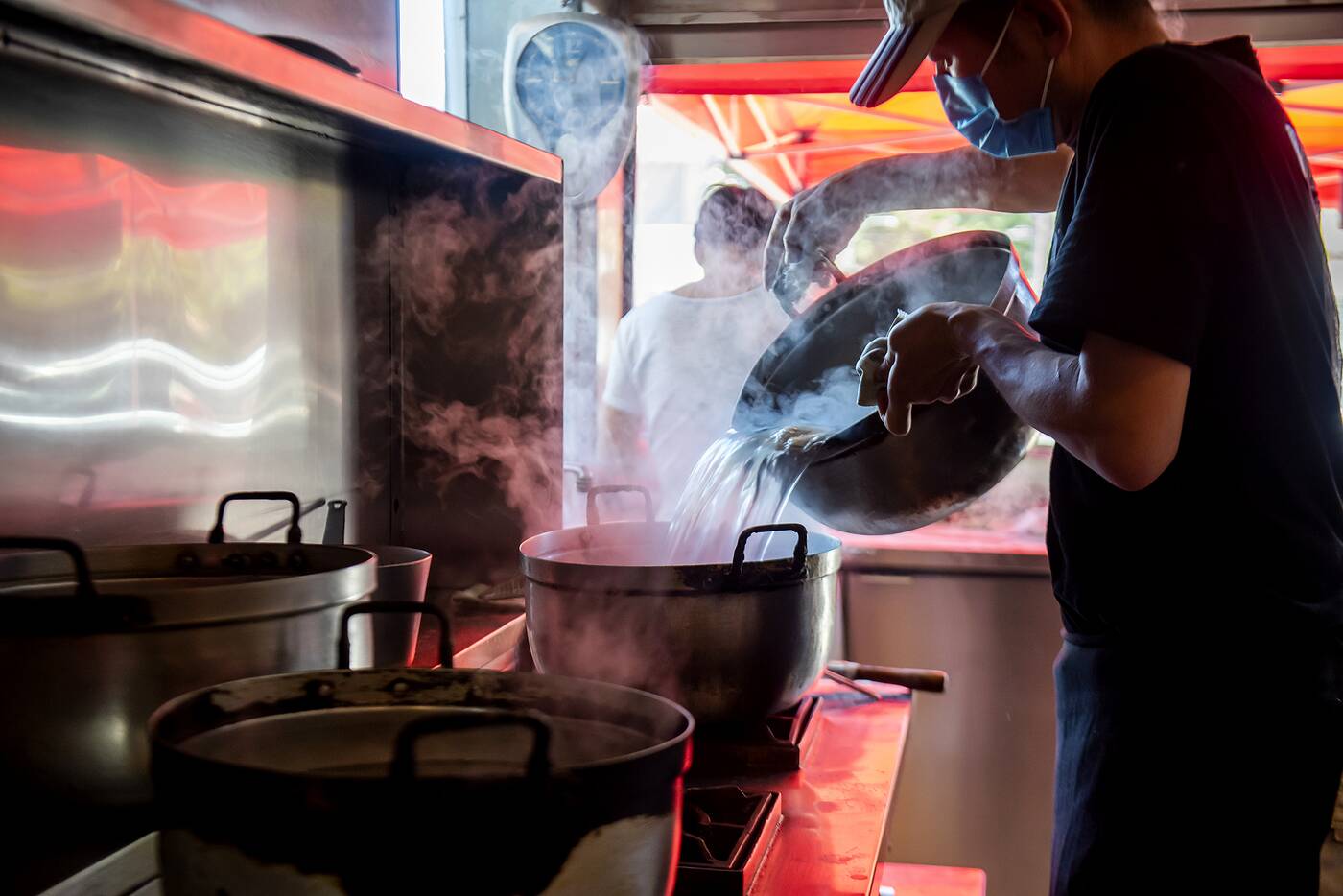 The first year of business was bad. Every dumpling he folded and dropped into boiling water fell apart. Sun soon realized he needed to perfect his recipe and left for China.

For three months he learned from cooks in Beijing, his hometown Harbin, Shanghai and Xi'an. He'd phone his team in Toronto to relay techniques he was learning in real-time. 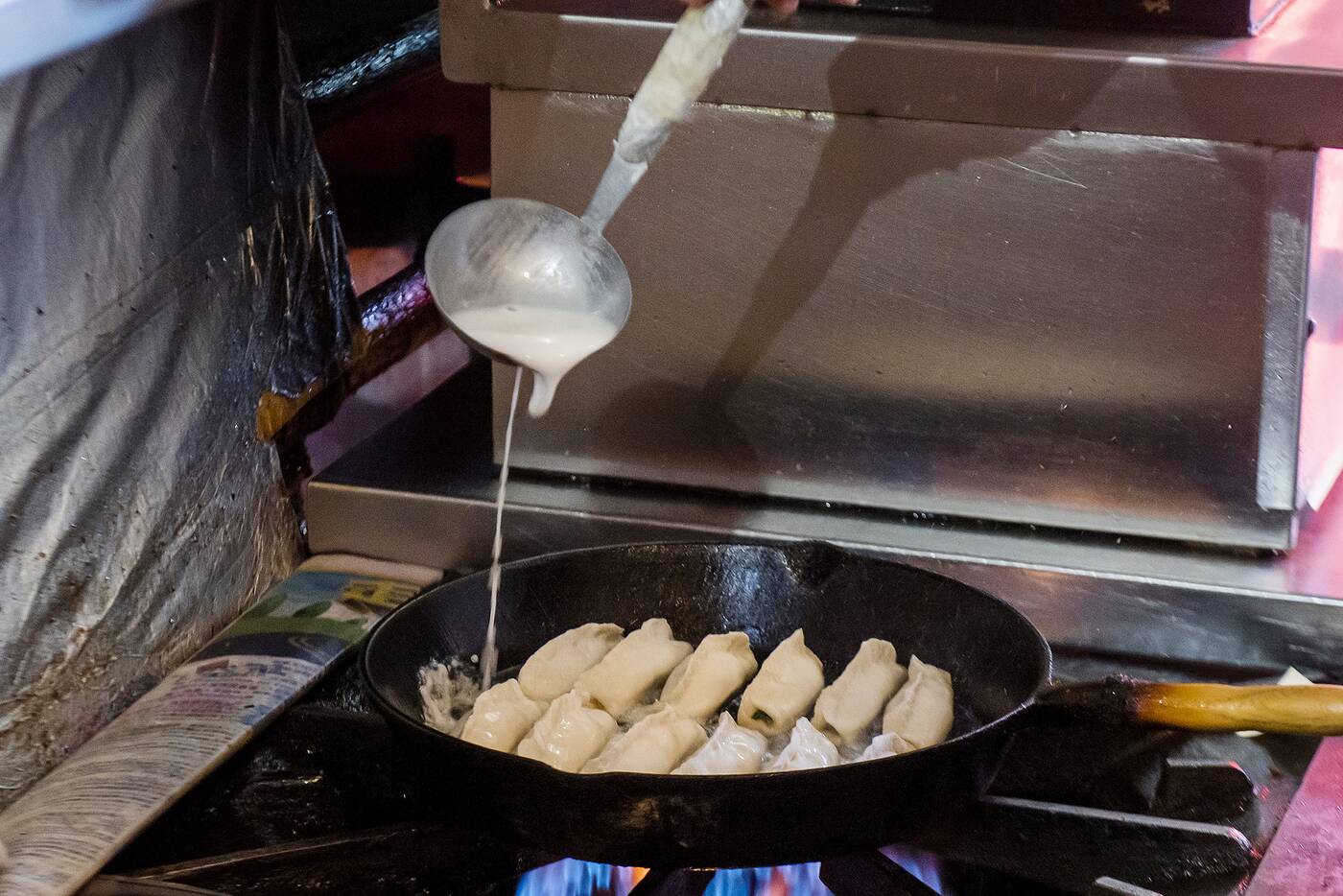 But things didn’t pick up for Dumpling House until Sun shifted focus from boiled dumplings to pan-fried ones in 2006. He swears it took over 10,000 tries to perfect the recipe for his signature fried skirt.

The technique requires a slurry with the perfect flour-to-water ratio, poured over dumplings while they're still in the pan, and the hands of an experienced cook to expertly flip it while dangerously hot upside down. 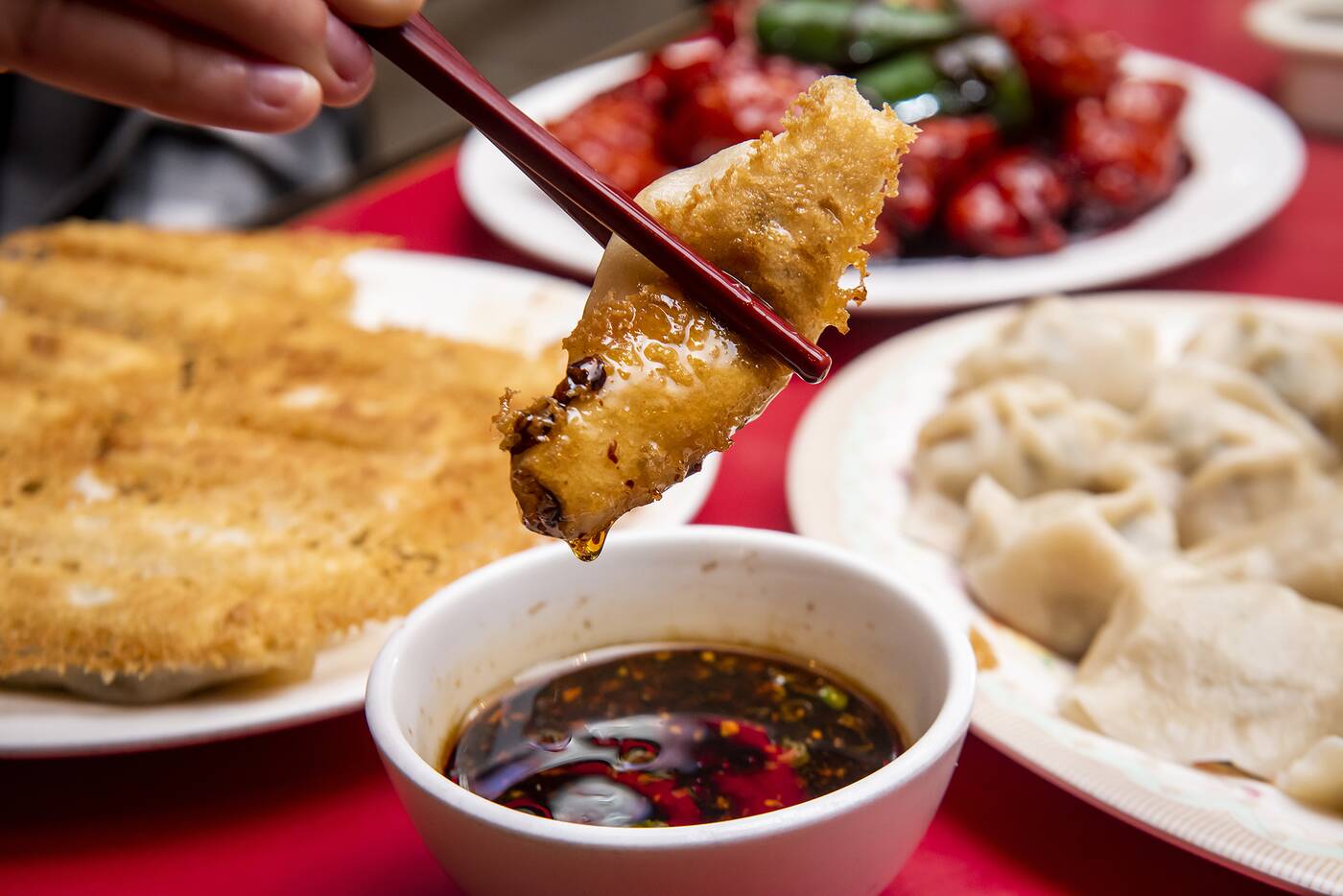 Within weeks, word had spread about Sun's pioneering plate of fried dumplings. A year in and business was booming, bolstered by the ingenious decision to move the dumpling kitchen from the basement to the front of the restaurant, in plain view of passers-by.

The menu hasn't changed much since then. These days a dozen dumplings averages $11.99, with the most popular fillings being pork and chive, or the option to get three fillings for $13.99. 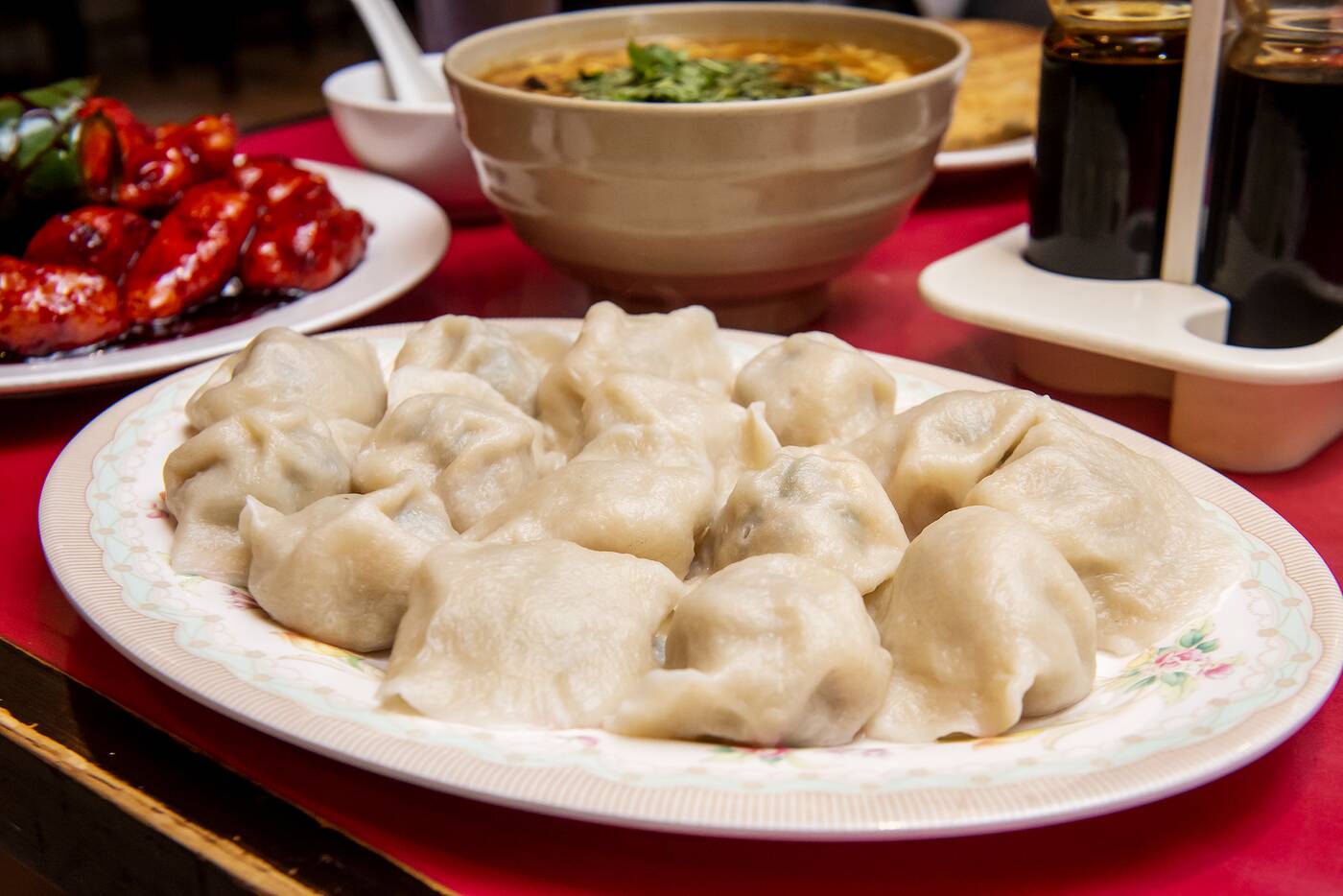 Thick-skinned boiled dumplings (which, despite what the menu says, aren’t steamed) are equally delicious, especially if you order the lamb. 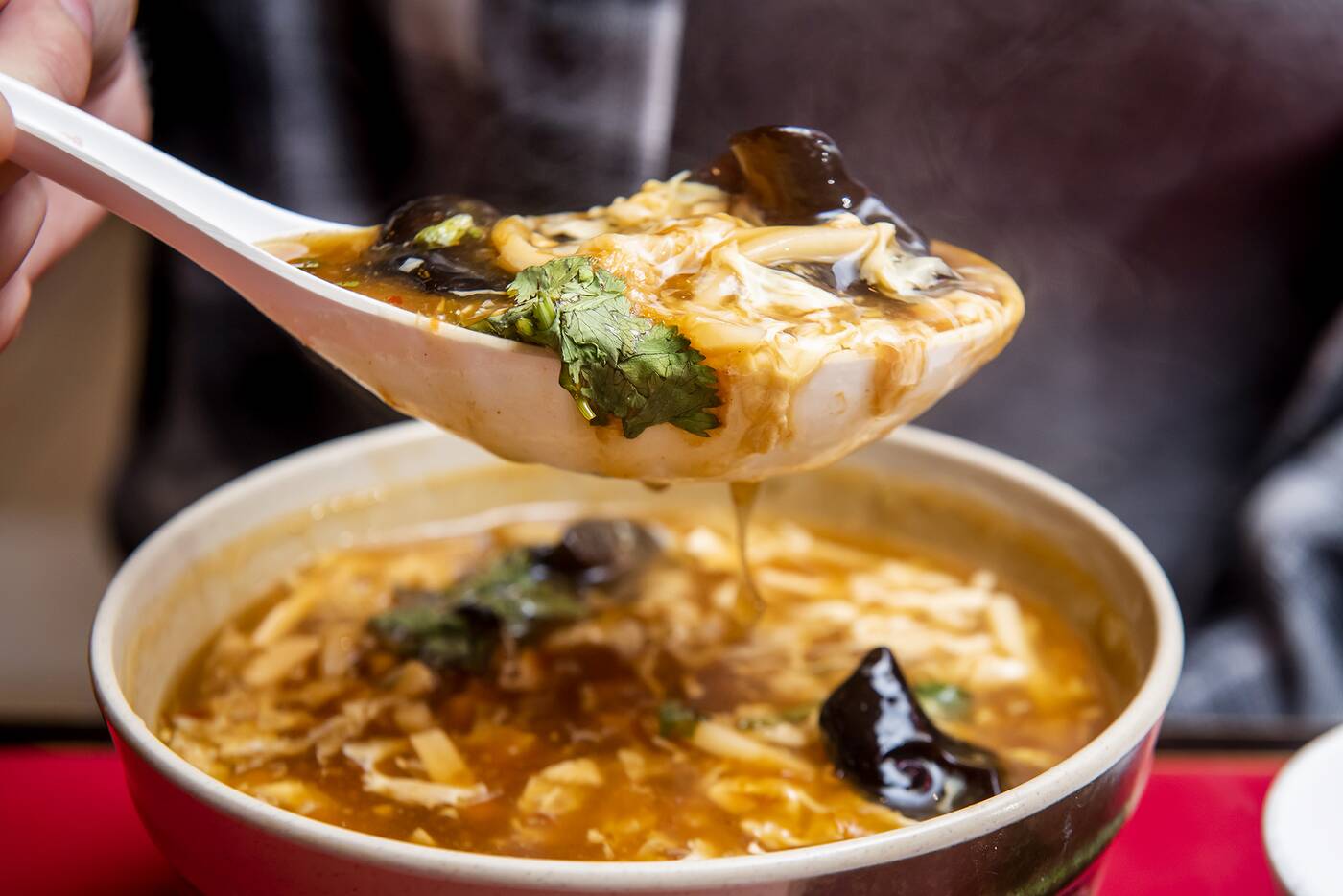 If you're looking for the perfect hot and sour soup, look no further than the sizeable bowl of wood ear, bamboo shoots, tofu and egg drop for $7.99.

The tasty General Tao’s chicken ($13.99) gets its deep colour from cranberry sauce, Worcestershire sauce and rock sugar for an uncharacteristically thick-breaded chicken served with jalapenos. 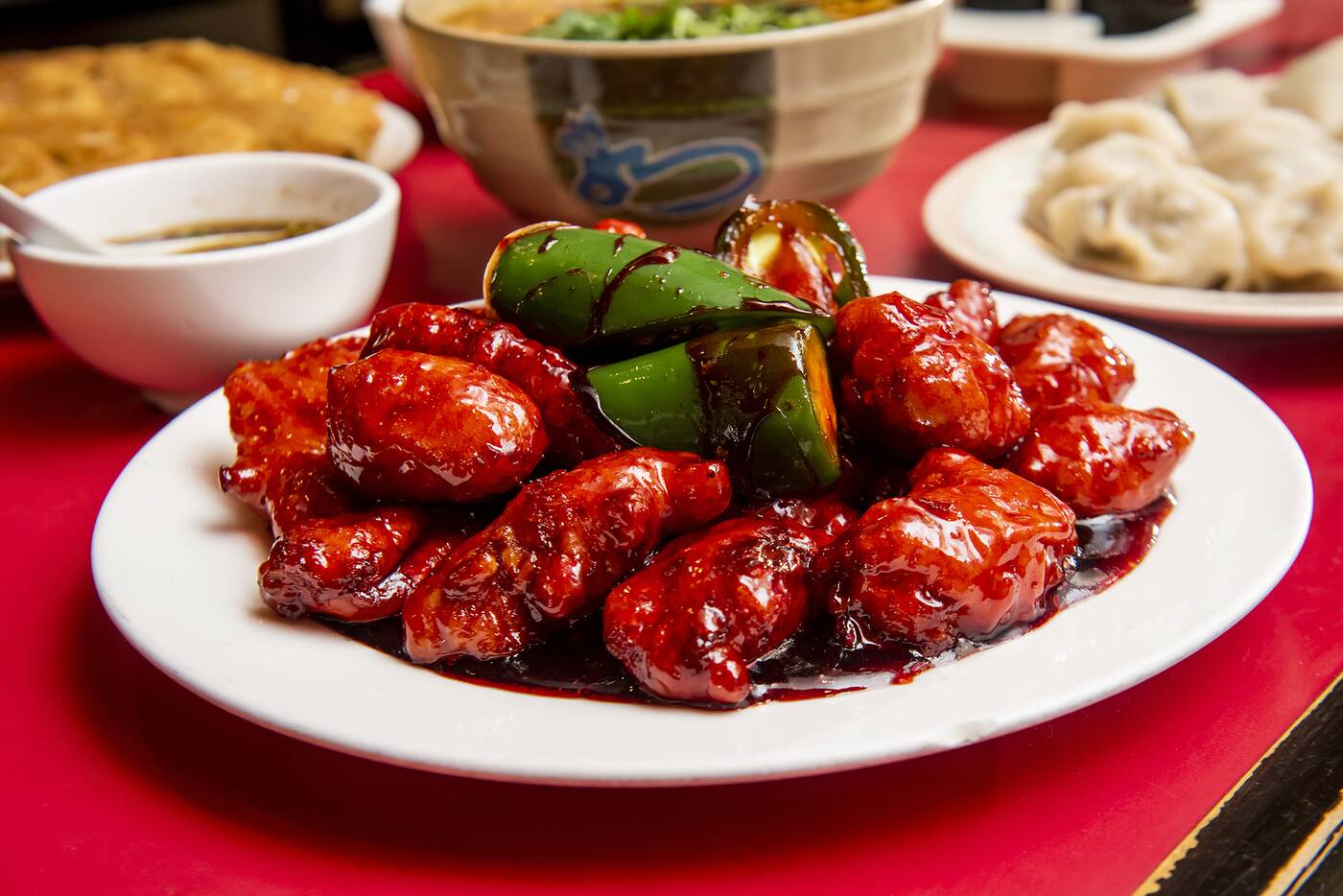 Eating in the red-painted restaurant pre-pandemic guaranteed a full-sensory experience, the hot sizzle of frying dumplings coupled with back-and-forths, sometimes heated, between Sun and Zhang.

Sun, who's all about fair competition, doesn't think anyone's been able to best his recipe so far.  "If it's special, it's because it's simple," he says. "It’s not just flour and water… Dumplings represent Chinese cuisine." 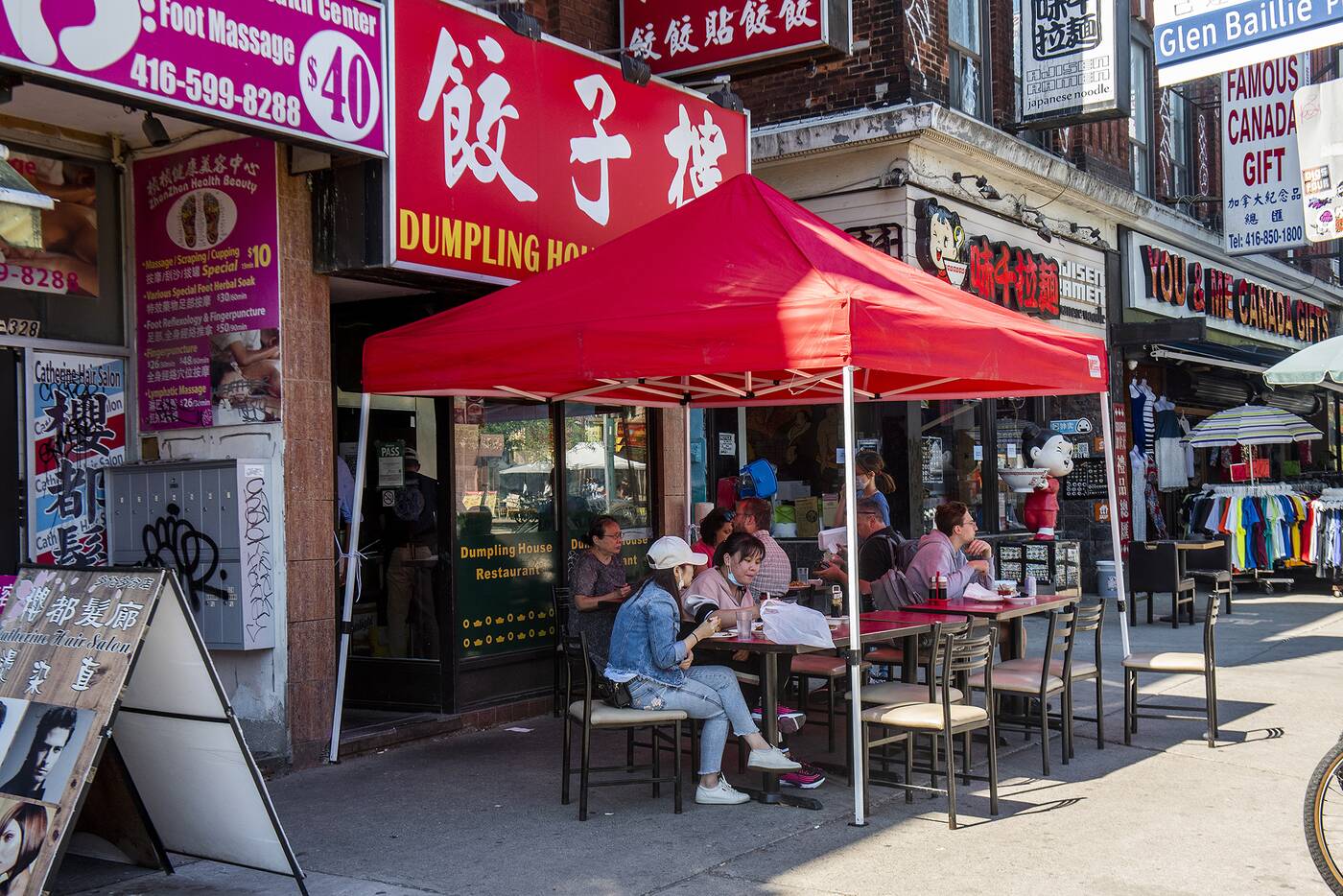