Like Mitzi's Café and Mitzi's Sister , Mitzi's on College, the newest brunch spot in the Mitzi empire, overflows with the hip, the hungry, and the hung-over. Opening on Saturday, it has arrived just in time to pour hollandaise all over a perceived gap in the College/Ossington brunch scene (the diners next to me were bemoaning the lack of a good brunch in this 'hood, forgetting perhaps, that the Dakota Tavern is but a short walk away).

Since Mitzi's College opening had been delayed, I called ahead to confirm it was running and learned that the queue of excited diners stretched down the block. That was enough for my sweetheart and I to delay our trip until 3:30, when most serious Sunday brunchers have already dragged their morning-after smells and heavy bellies back home to bed.

It was a good strategy. By the time we arrived, the queue was a distant memory and only confusion among wait staff could delay our meal any longer. Some caveats: it was Mitzi's on College's second day in operation, and by all accounts it had been a doozy. If service in the future falters like it did on our trip, then only lazy hung-over locals too tired to walk for food will save the restaurant. For now, I'll just trust that Mitzi's needs to sling a few more oatmeal pancakes before they get their groove on. 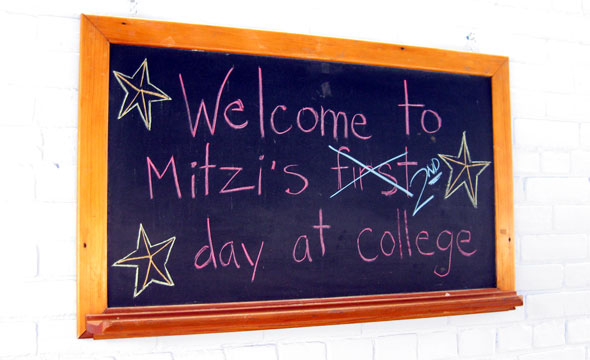 I'll also hope that they get some hairnets for their kitchen staff, because my delicious poached egg on sweet potato mash with aged cheddar sauce and sautéed leeks would have been a lot more appealing without the lone human hair nestled beneath my toast. For the record, I didn't mention it to staff: although I don't think hair on my breakfast is cool (especially when said breakfast breaks the $10 mark), I had waited awhile for this meal, and was eager to get on with it. And I'm glad I did, because, for the most part, it was really tasty. Poached eggs were perfectly executed, with whites as firm as the yolks were runny. Nestled atop a blazing orange scoop of sweet potato mash and smothered in a tangy aged-cheddar sauce, they gained delicate crunch from a sprinkle of crispy sautéed leeks. They were everything poached egg treats should be, and warm and tasty enough to add heat and flavour to my cold home fries. 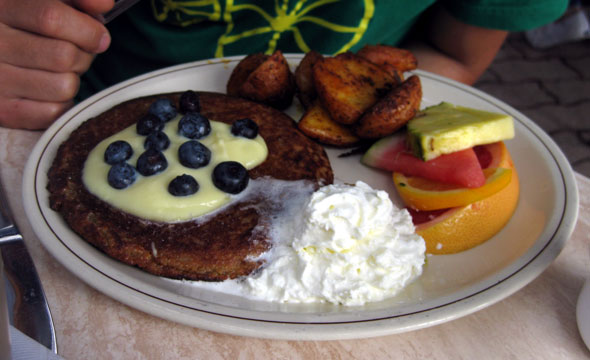 My sweetheart's oatmeal pancake, the Mitzi empire's signature brunch dish, was the winner at our table. Both hearty and fluffy, it rode the fine line between healthy and decadent. Served with blueberries, creamy Pernod custard and a side of whipped cream, it's easy to see why this tasty treat has become the hallmark of a Mitzi's breakfast.

Mitzi's on College is a bit too far from my home and a bit too pricey to ever become a regular brunch option for me, and it's unlikely I'll be returning anytime soon. But one thing is certain: Mitzi's pancakes have earned a permanent place in my breakfast fantasies. 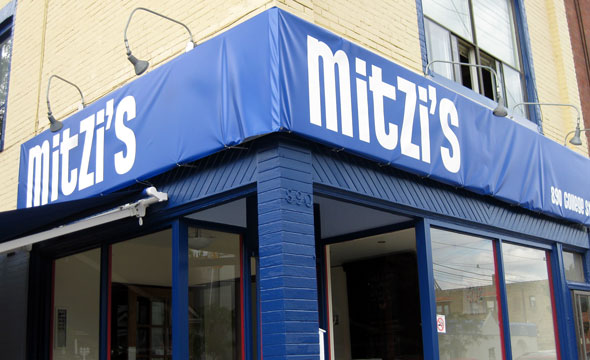