Miss Thing's is a pan-Asian, Polynesian-inspired restaurant and cocktail bar in Parkdale that was previously Wrongbar . Owner Nav Sangha felt it was time for a transition after seven years of the space as a dance club/music venue, and travelling to Tahiti and Bora Bora gave him the idea for the revamp's theme. 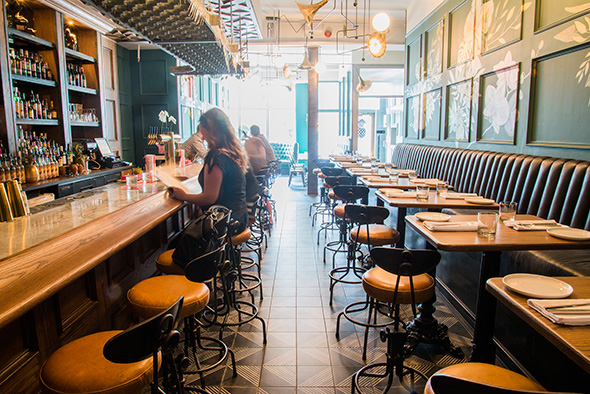 A golden pineapple, an international symbol of hospitality, is part of the resto-bar's logo, and the aim here is to provide patrons with a refined kind of tropical island escape, to allow them to be self-indulgent and have a fun night on the town. 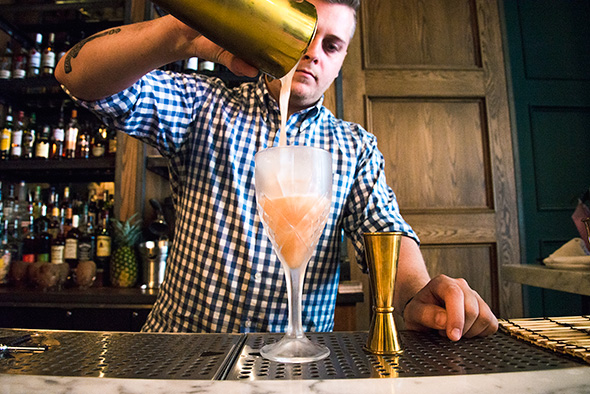 Bar manager Reed Pettit ( Miller Tavern ) has created a cocktail program that's tropical and playful yet decadent. Instead of $15 concoctions, he offers up elaborate drinks with island twists that are reasonably priced for what you get, with the most expensive ones topping out at $13. 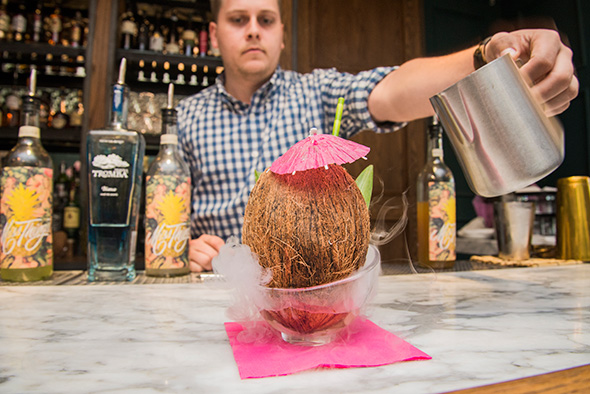 Tommy's Colada ($12) is, as its name implies, a play on both a Tommy's margarita and a piña colada. It contains Tromba Blanco tequila, lime, habanero, pineapple and coconut, and is quite a spectacle to behold, as it's presented in an actual coconut surrounded by dry ice. The colourful cocktail umbrella as a garnish is as close to tiki as this place gets. 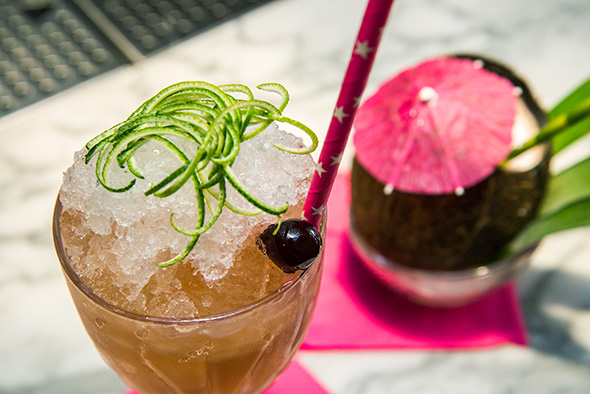 The Hong Kong-born chef leading the kitchen also happens to be named Jasper (Wu, that is). He and sous-chef Paul Hadian are well versed in pan-Asian cuisine, having worked at Bent and Momofuku respectively. 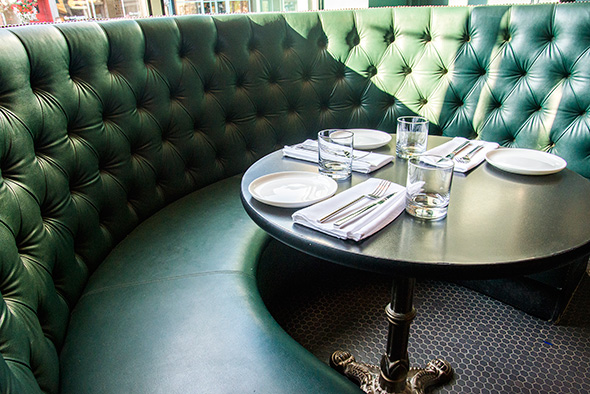 Taking inspiration from Polynesian flavour profiles that combine sweet, sour, savoury and spicy, they've created a menu of dishes that lend well to sharing, but they're also plates one can also eat on one's own, which you may want to do, as they're all insanely tasty. 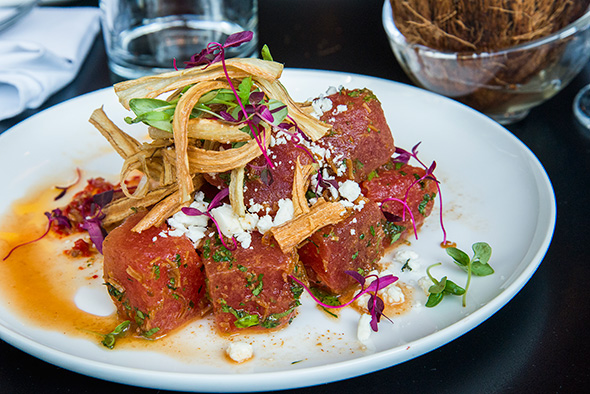 From the raw bar, there's a watermelon salad ($10) tossed in a slightly spicy house-made XO sauce (a nod to Wu's HK roots) along with lime juice, and topped with cotija cheese and crispy - not to mention addictive - gobo (fried burdock root). This dish is crazy delicious and refreshing; I can't stop eating it, despite the fact that I'm not the biggest fan of watermelon. 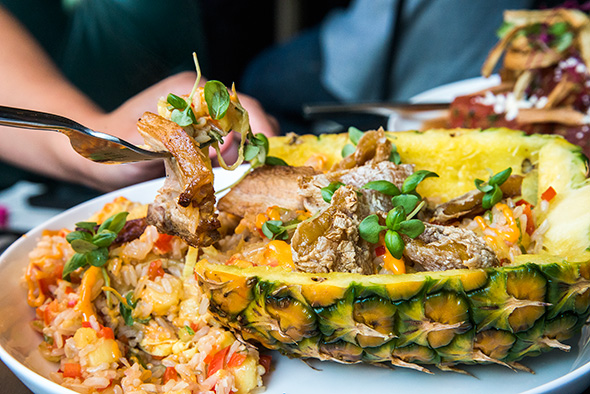 My dining companion's fave is the pineapple fried rice ($16), which is a wondrous jumble of pineapple, red pepper, egg strands, brown jasmine rice, basil sprouts, sriracha mayo and braised pork belly - or for vegetarians, battered and deep-fried jackfruit (or maybe both, if you ask nicely) - spilling out of a halved pineapple.

The deep-fried jackfruit is a revelation, and even though our fried rice is missing the toasted

cashews it's supposed to have, it's easily forgiven as it still tastes like a winner. 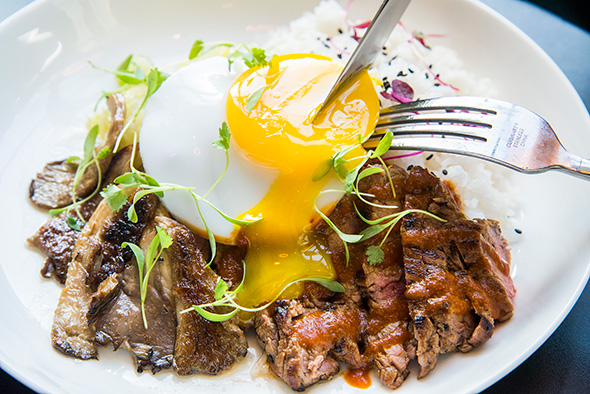 An elevated version of loco moco ($18), a Hawaiian comfort food staple, exchanges the hamburger patty with flank stank and the brown gravy with house-made A1 sauce. It's served with coconut rice sprinkled with toasted black sesame seeds and a sunny side up duck egg, along with the addition of butter-poached leeks and sauteed oyster mushrooms. Fancy. 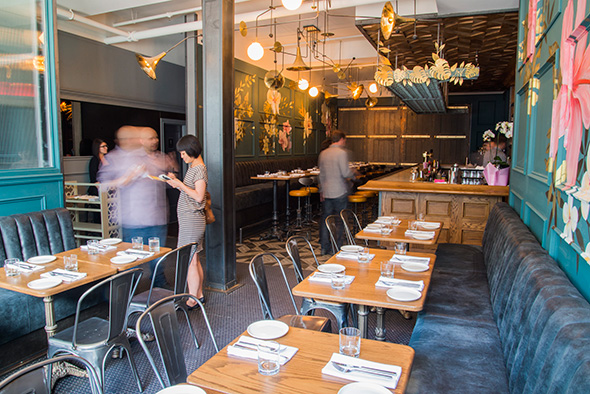 Everything here is colourful, flavourful and presented beautifully. I think it's pretty safe to say that Sangha has another hit on his hands. 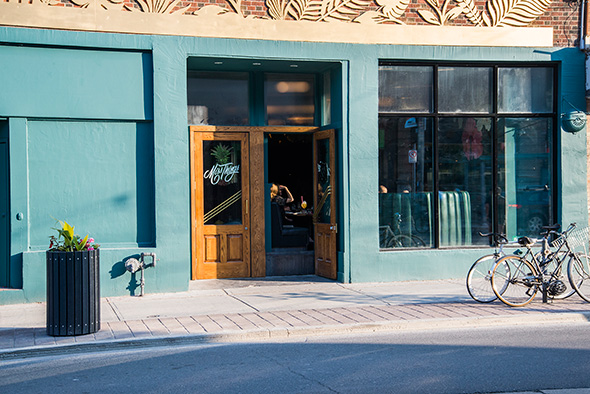