From the brains behind Eatertainment and Cfood , comes MEATing - a steakhouse with a twist.

Parked by its sister seafood restaurant, in the trendy Yonge & Eglinton area, MEATing is a place that is designed for the uber chic crowd. Popular lime green and chocolate brown make up most of the interior colours and modern antler light dressings and animal rugs remind you that you are here for meat...and meat only.

During this visit, we are seated at a small table in the middle of the dining room, a large space that can accommodate parties of 2 as well as fairly large groups.

Our waiter is welcoming and nice. He not only ensures that we understand the menu but makes sure each dish is to our liking.

I take a glance and the menu and it is just as I suspected. Lots of meat dishes with a sprinkle of seafood components, mainly within their appetizers.

We start with the turf and surf sushi ($9), seared beef and yellow fin tuna on a bed of sprouts and deep fried rice. The beef and the tuna were nice and fresh but I found the rice to be a little too crisy. It was a bit shocking at first bite and something I am not sure I could get used to.

Their main course menu is straightforward. You pick you choice of a meat dish segmented by tame (which would be all of your steaks), game (venison, boar, elk, kangaroo listed amongst this list), and organic (rabbit and a NY striploin). You also have a choice between a North American seasoning or European herbs. Three main dishes from Cfood are also offered.

With each main you get your choice of a starch. Other a la carte dishes are also available at an extra cost.

During this visit, I have the 10oz NY Striploin ($21), a big slab of juicy meat with the European mixed herbs, sea salt and pepper with a side order of grilled greens. It was neither outstanding nor awful. It was just as I expected...a grilled piece of meat. Unfortunately, it was easily forgettable 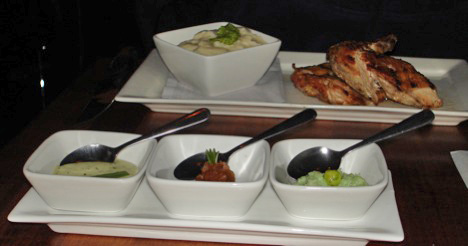 Mark had the tasteless boneless chicken ($19) with the Euro rub with a side order of overly mashed potatoes and peas.

The meat dishes did come with a nice aioli sauce, wasabi horseradish and raspberry tip which we drenched our meat into.

Meating had met my expectations. It was a good this I set them pretty low.

PS. One neat thing about their menu is their Operation Herbie Cake ($20), a slice of cake whose proceeds go to benefiting operation Herbie foundation at Sick Kids