Le Ti Colibri has recently opened in Kensington Market , adding its unique international dishes to a neighbourhood already known for bold flavours, exotic ingredients, and best of all, affordable prices. Fortunately, this petite spot on Augusta Avenue more than holds its own.

Billed as Toronto's first French West Indies Creole eatery, Matthias Laurin (of vegetarian meccas Fressen and Urban Herbivore ) and Kristel Procida's menu does indeed bring the traditional flavours of the islands to the discerning palates of market-goers. The flavours of their bokit sandwich, in particular, deserve all the attention they'e been getting. Slightly crispy with a buttery finish, the deep fried bokit bread is puffed to the shape and size of a catcher's mitt. 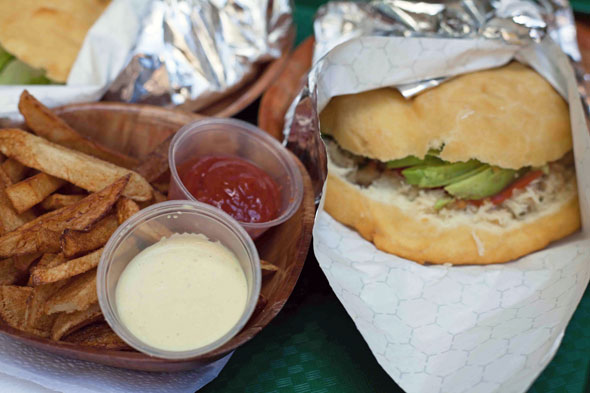 In its most tasty variation--known as féroce--it's crammed full of salt cod, avocado, lettuce, tomato, with a light drizzle of house dressing ($8.99). Spend the extra few dollars for the hand-cut cassava fries and homemade mayo, and you'll want to think about bringing a second person on board to help out. No wonder bokit's a late-night favourite back in Procida's native Guadeloupe. 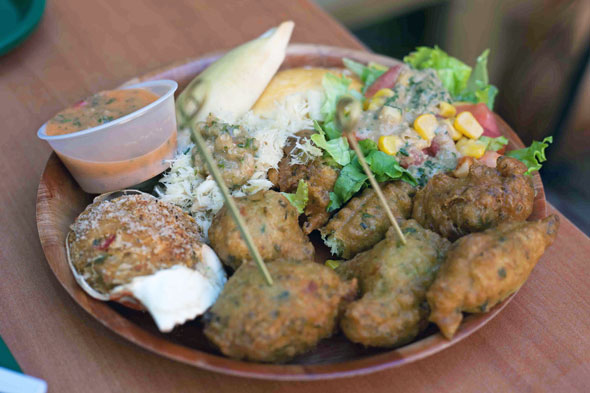 But for a flavour that turns up the heat and really shows off Laurin and Procida's versatility behind the counter, try the winsome creole platter. Their insistence on traditional French-Caribbean recipes made from scratch shines in this dish, which works well either as a snack for a few, or a meal for one. It includes salt cod or shrimp fritters, salt fish patties, side salad topped with their signature melon and corn dressing, and a side of homemade hot sauce. Butterless, the fritter dough is accented with chives, parsley, hot pepper, and thatched with shredded salt fish.

Knowing that fritters of this kind can often be too salty or fishy, the Colibri couple avoid this pitfall by soaking the salt fish before they marinate and cook it. As for the batter, Laurin's 15 years of working in a variety of kitchens found him tinkering with different proportions and ingredients for the mix. The result? A fritter that's pleasantly spongy, low on the grease factor, and packs a bit of heat. 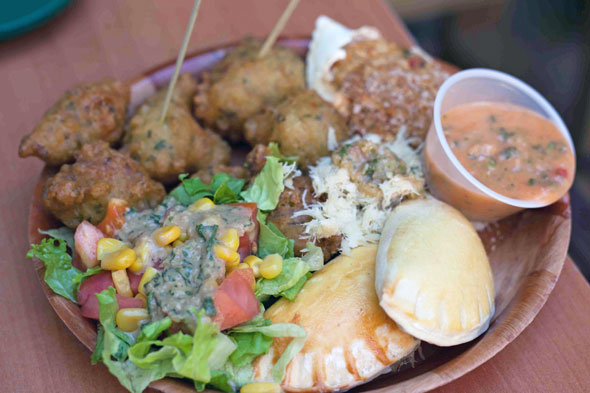 To balance out the fish-based apps, adding a side of their stuffed soft-shell crab is also recommended. It can only enrich the range of flavours--and heck, visually, it's that much more suggestive of a beachy reverie. If you find yourself slightly overwhelmed by the food's considerable spice, their refreshing limeade, made with sugarcane syrup and a hint of cinnamon, does the trick. 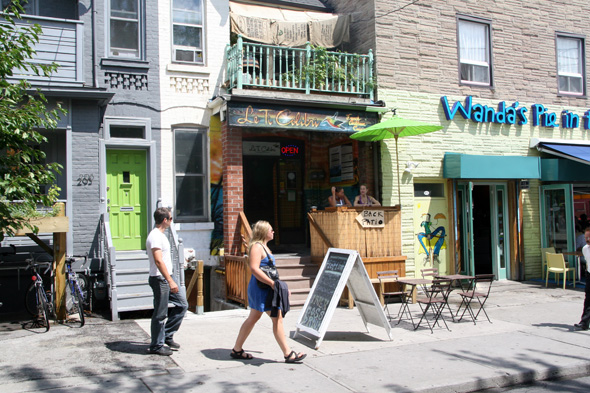 While not exactly tropical, the greenery, ferns, and hut (built by Laurin) on the patio tucked out back is nonetheless the ideal backdrop for the island cuisine. Casual and surprisingly sealed off from the noise of nearby market calamity--perhaps by their well-chosen zouk riddims --this hidden bower might be just the ticket to recalibrate your summertime vibes for a while longer. I almost expected the "little hummingbird" of their namesake to flutter by for a cameo.

Writing and photos by Joshua Chong