Le Kensington Bistro & Rotisserie is not chef Jean-Charles Dupoire and sommelier Sylvain Brissonnet's first foray into Toronto's French restaurant scene. The longtime friends already own the acclaimed Loire restaurant and have taken over the former grounds of La Palette in Kensington Market for their second mark on the city. Fine French cuisine may not be the first sort of restaurant that would come to mind when dining in the market, but with the surrounding plethora of fresh produce and cheese shops, its locale is reminiscent of a typical neighborhood brasserie mingled amongst shops on bustling Parisian streets.

Le Kensington is more détendu than Loire with a menu of contemporary French bistro and brasserie staples. Speaking French is a requirement for servers working alongside the chef/somellier duo who switch from French to perfectly stereotypically accented English with customers. Brissonnet's character-like Frenchness and flurried, yet controlled rushing about adds an extra je ne sais quoi charm to the whole experience. 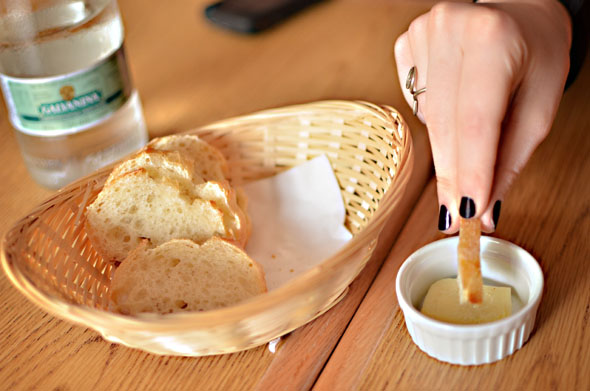 The decor is simple, but I'm not sure what to make of the menus adorned with a pompously cheerful rooster playing waiter. The big black chalk boards menus that dominate the wall space are a charming throwback to a typical bistro. 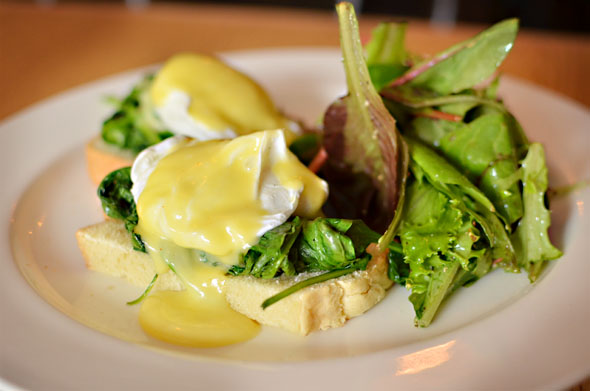 The brunch menu offers some surprisingly un-brunch like options including fresh market oysters (3pc/$9, 5pc/$18), beef tartar with quail egg ($12) and whole or half rotisserie chickens ($32/$16). The French have a somewhat complicated relationship with breakfast given that aristocrats rarely rose before noon from their late night, wine-fueled escapades. Déjeuner actually translates as "break the fast" but today means lunch unless you're in Quebec and it still means breakfast which we all know, of course, thanks to Trudeau and his cereal boxes. More on why you are eating diner for brunch can be found here . For those less willing to delve into oysters for brunch, the eggs Florentine are an immaculately whipped delight served with rösti, a Swiss style of potatoes, or a market fresh petite salad at lunch time.

Dejeuner still takes on it's traditional etymology as breakfast with choices like pork belly with fried eggs ($15), eggs Benedict ($13) and wild mushroom omelette with goat cheese ($13) on the lunch menu. The simple, but insanely popular jambon beurre sandwich ($9, add $4 for salad or frites), makes the cut on the short lunch menu as well as the croque-monsieur ($9). The two sandwiches, essentially the fast-food staple for thousands of corner brasseries in France, aren't exactly the most, bah, elegant of French dishes. However, the decidedly unpretentious options felt well chosen for this Kensington home. As expected, the croque was perfectly delicious with melted gruyere cheese dripping into the creamy layering of ham and Béchamel sauce. The more adventures can opt for beef tongue in lieu of ham on their croque. 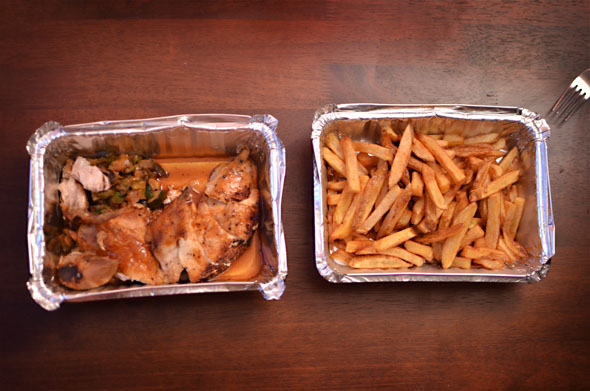 The rotisserie chicken to-go ($16/$32) is certainly a luxurious form of take out food but deeply satisfying for the inner gourmand. The chicken is without a doubt, masterfully cooked in a sauce that took chef Dupoire months to perfect. There's something about eating such an immaculately cooked piece of chicken on your couch that feels so indulgently Marie Antoinette- ceci n'est pas KFC. 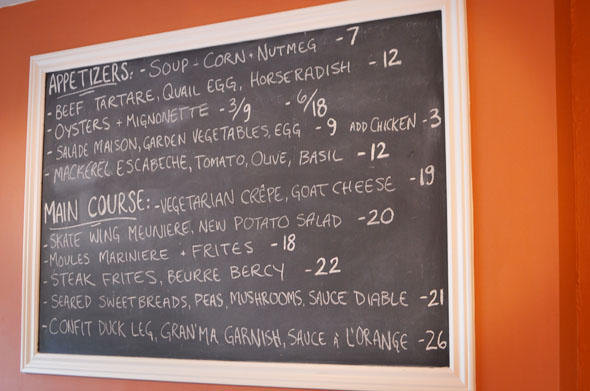 Dinner includes more of the classics like moules frites ($18), steak frites ($22) and, le plat préféré of my thoroughly Parisian petit-ami, duck confit ($26). Brissonnet's carefully chosen wine list is a mix of Canadian and French wines with most glasses around $10 and bottles around $50.

Crème brûlée ($9), mais oui, finds its way onto the desert menu but I opted for the sinfully rich dark chocolate mousse ($9) with a light orange flavouring and four langues-du-chat to sweep up any left over chocolate evading the spoon. 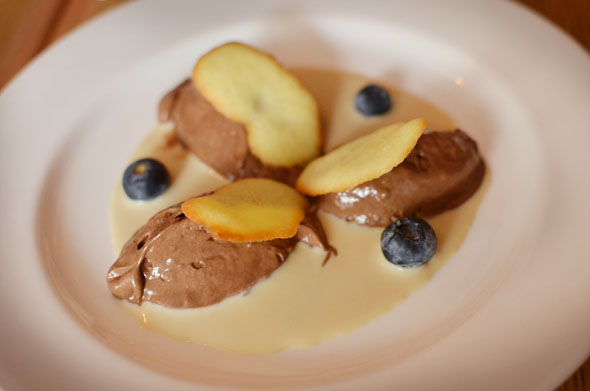 For those who have visited the most visited country in the world, the dishes are elegant and meticulously crafted renditions of nostalgia inducing classics from the motherland of fine cuisine. And for those intimidated by the seemingly inedible, unpronounceable offerings of French cuisine, le Kensington is certainly an ideal place to discover some of the simple, everyday indulgences of France. The unpretentious and downright cheery service is certainly more Canadian than French and they will even let you, gasp, take your left overs to go — a true sign of refined French cuisine meets Kensington Market. 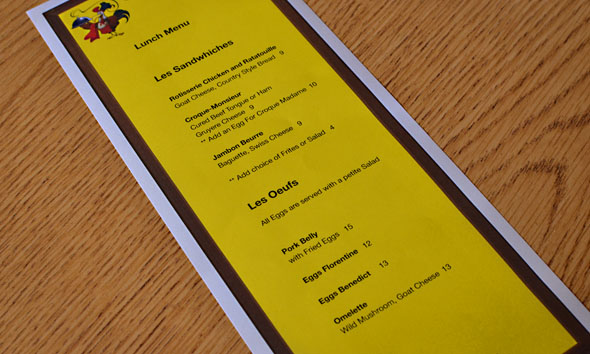