Hey! on Roncesvalles has been open for just a week in the space that long housed the 100-seater coffee shop, Tinto . My boyfriend and I are former residents of the area, so the trek south is loud with exclamations at the changing neighbourhood, and much wonderment about how Hey! might've re-interpreted its somewhat dowdy new address.

Truly, nothing could've prepared us for the freshly white-washed stucco exterior, on which the words Hey! are written (misleadingly, but more on that later) in the same cursive script as its (purported) sister-restaurant in Little Italy. Thinking we were in for more of the same incredible meatballs (a statement that I sincerely thought I would never make), our enthusiasm is doubled. 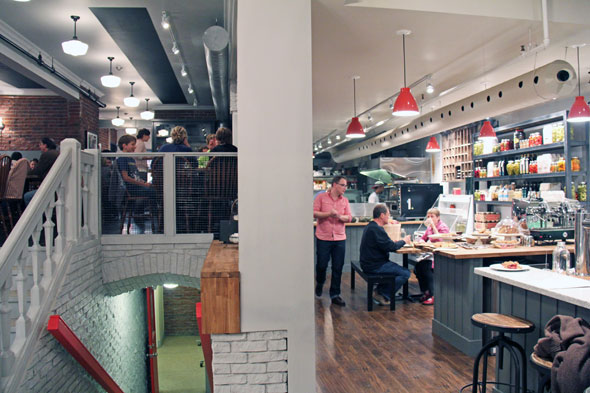 The interior has been gutted, re-plastered, and coated in rustic kitchen accents--we rudely walk around 'ooh'ing and 'ahh'ing at the changes before a server flags us down. The dominant decor theme here is old country, with bleached wood tables, exposed brick, and glass cabinetry throughout. They've made beautiful use of the space, with a full dining room upstairs (with additional picnic bench seating in front of the mostly open kitchen downstairs), and a juice bar and bar seating downstairs. 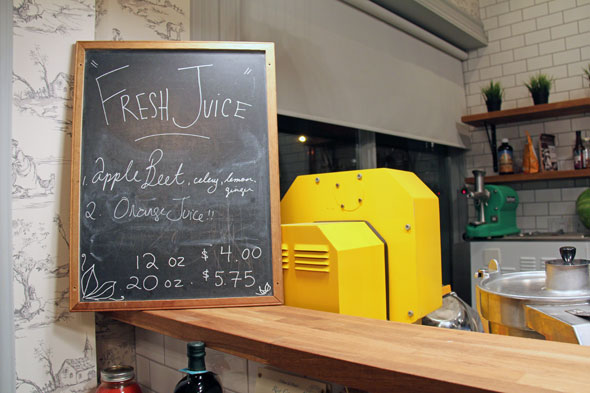 We choose a booth, each of which is outfitted generously with large pillows in playful, barnyard animal prints. It's cozy, and at the end of the day, a tempting place to rest my head. But I'm too confused for that. It begins when we sit down--bordered by children and infants, eerily good-looking twenty-somethings, and intellectuals.

You can chalk that up to Roncesvalles--a neighbourhood that's home to young families, older Eastern Europeans, and a bustling dining scene that's flypaper for a let's-suggestively-call-it-hip demographic. 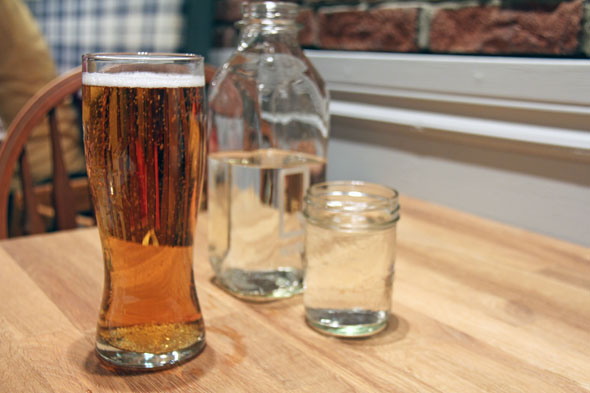 To drink, there are fresh offerings from the juice bar, and homemade sodas, as well as draught beer. Sleeman's Original will set you back $7. The menu is also a head-scratcher. There are polite nods to the neighbourhood's heritage with the potato-and-cod soup and the seems-slightly overpriced chicken schnitzel. There's the pizza and pasta that one would expect from an Italian restaurant--which Hey! allegedly is--as well as plain ol' country cooking in the form of the a pork loin dish and sides of warm green beans and Ontario corn. Then there's the cheeseburger with house-made ketchup ($13.50), but that's its own brand of mystery. 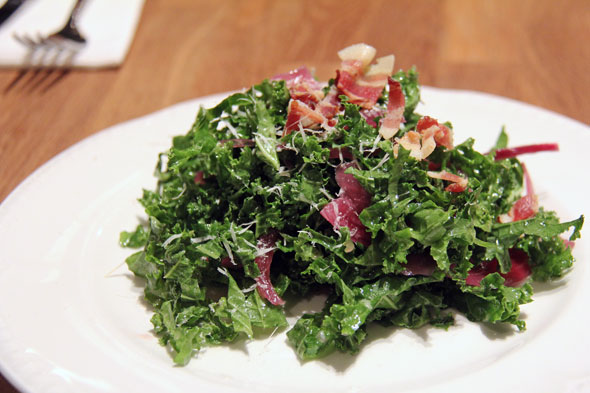 First up is the Caesar salad ($9.25). It, too, is unusual. In place of romaine is crisp kale, and in place of croutons are pickled shallots. A generous sprinkling of pecorino cheese and what-seems-to-be-uncooked bacon tops it off, with the whole thing tossed in a very light vinaigrette. Chef Bowers , you intrigue me. It's, at best, a remarkably fresh-tasting interpretation of a traditionally heavy salad. The pickled shallots are almost candied, and lend an unexpected touch of both sweet and tart to the dish. 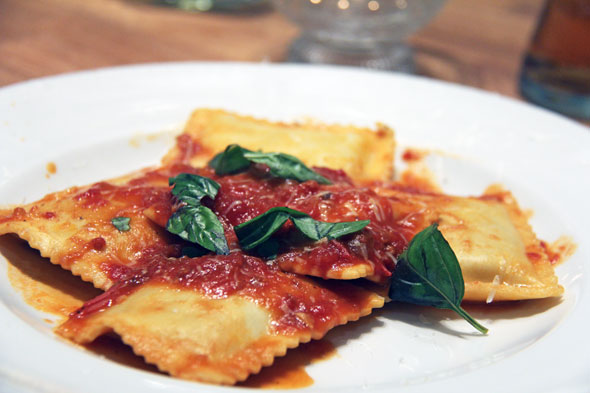 The braised short rib ravioli with tomato sauce ($14.75) sounds straightforward, and is eagerly anticipated. Unfortunately, it's the night's most disappointing dish. In my books, fresh pasta is meant to be soft, but the ravioli is al dente, and the short rib filling is sapped of the succulent flavour that braising should impart. The plate arrives cool, and while the basil in the sauce is fresh, the sauce itself is too simple--perhaps relying on the meat to deliver a punch. 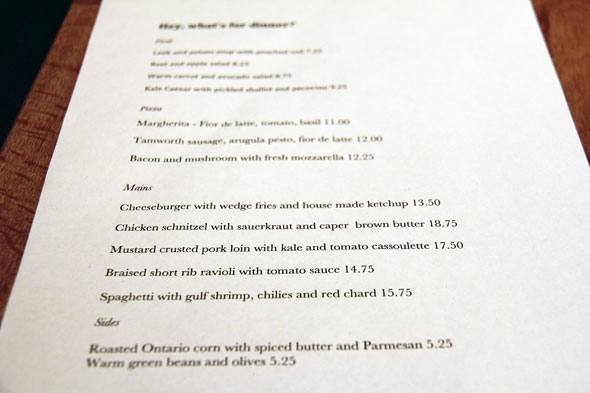 Next up is the mustard-crusted pork loin with kale and tomato cassoulet ($17.50)--simply spectacular. The cassoulet is appropriately rustic, amply spiced, and the white beans are perfectly cooked. Halved baby tomatoes and beets are lightly roasted, and complement the texture of the dish. Unfortunately, our servers are charming, but unable to answer questions about the dishes.

The menus rotate daily, and with three meals on offer beginning at 6 a.m., they're understandably frazzled by nighttime. I don't really mind not knowing exactly what the rich, tender squash-like vegetable on my plate is--the taste, after all, speaks for itself--but my curiosity still nags me. 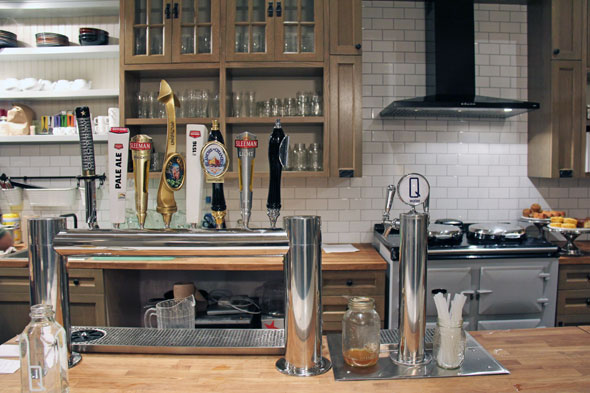 The meat is a decent cut of smoked pork loin, and makes for sheer indulgence, despite the fact that I can't really isolate the mustard crust. The consistency is drier and tougher than you'd expect from a cassoulet meat, but the flavour makes up for it. 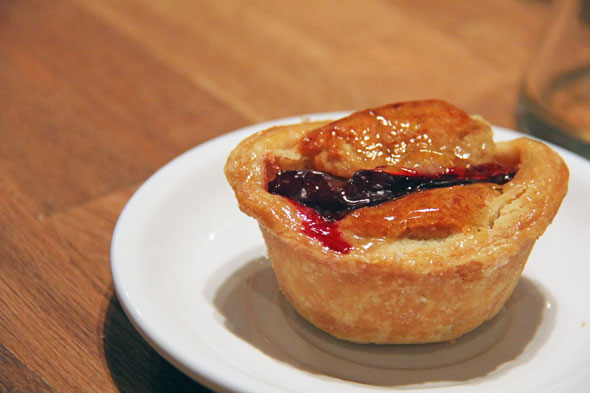 The desserts--an array of baked goods--are cleverly displayed downstairs. They're made fresh each day by local baker Leslie Cairns, and you spot them on your way in and mull on them throughout the meal--or, if you become addicted, you can hit up the on-site display for a take-out snack. We try a coconut creme pie with chocolate crumble crust ($4), and a tart filled with almond creme ($2). The former is the obvious winner. 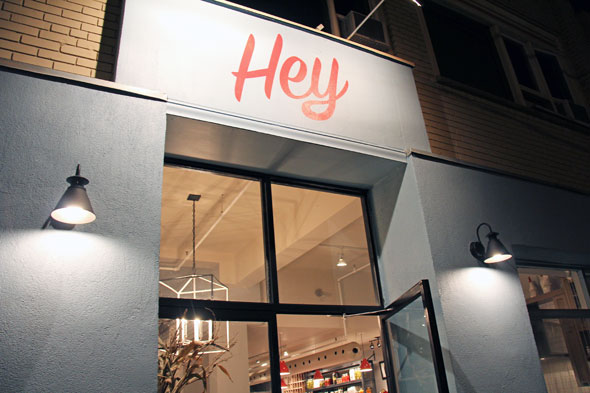 Back to Hey! scrawled across the restaurant's front: it's a misnomer. Perhaps they appear on a different day's menu, but the eponymous meatballs of the College St. location are nowhere to be found on our visit, and I, for one, am sad. That said, the pork loin remains memorable.