Hana Sushi is Toronto’s first-ever restaurant with a sushi conveyor belt and monorail.

An iPad ordering system, continually rotating conveyor belt and on-demand sushi monorail system ensure that the only time you ever actually talk to a person during your dining experience might be when you’re seated. 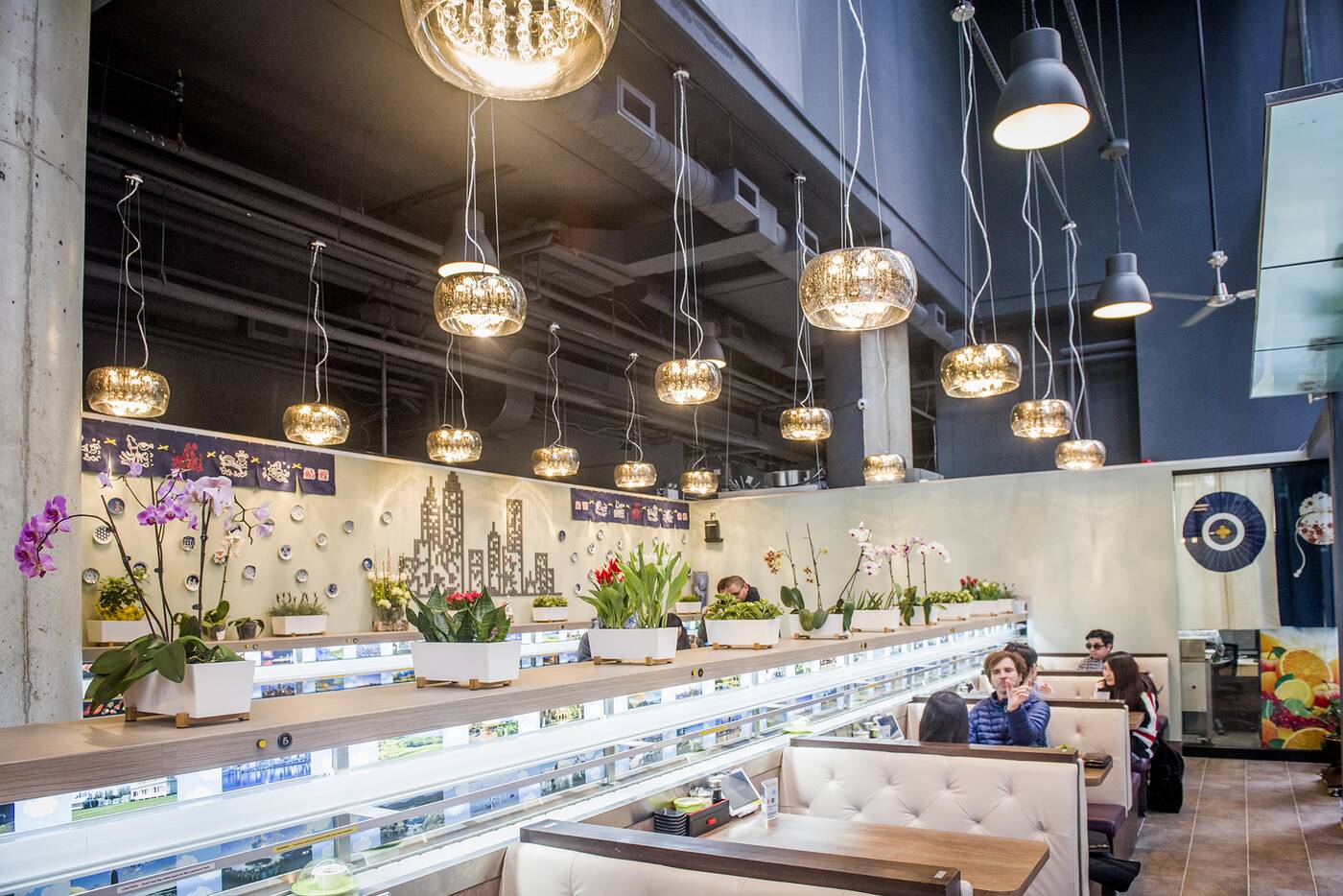 The long, narrow, high-ceilinged space suits the concept well, small but comfy four-person booths flanking the central conveyor belt. The machinery was actually all imported from Japan and assembled here. 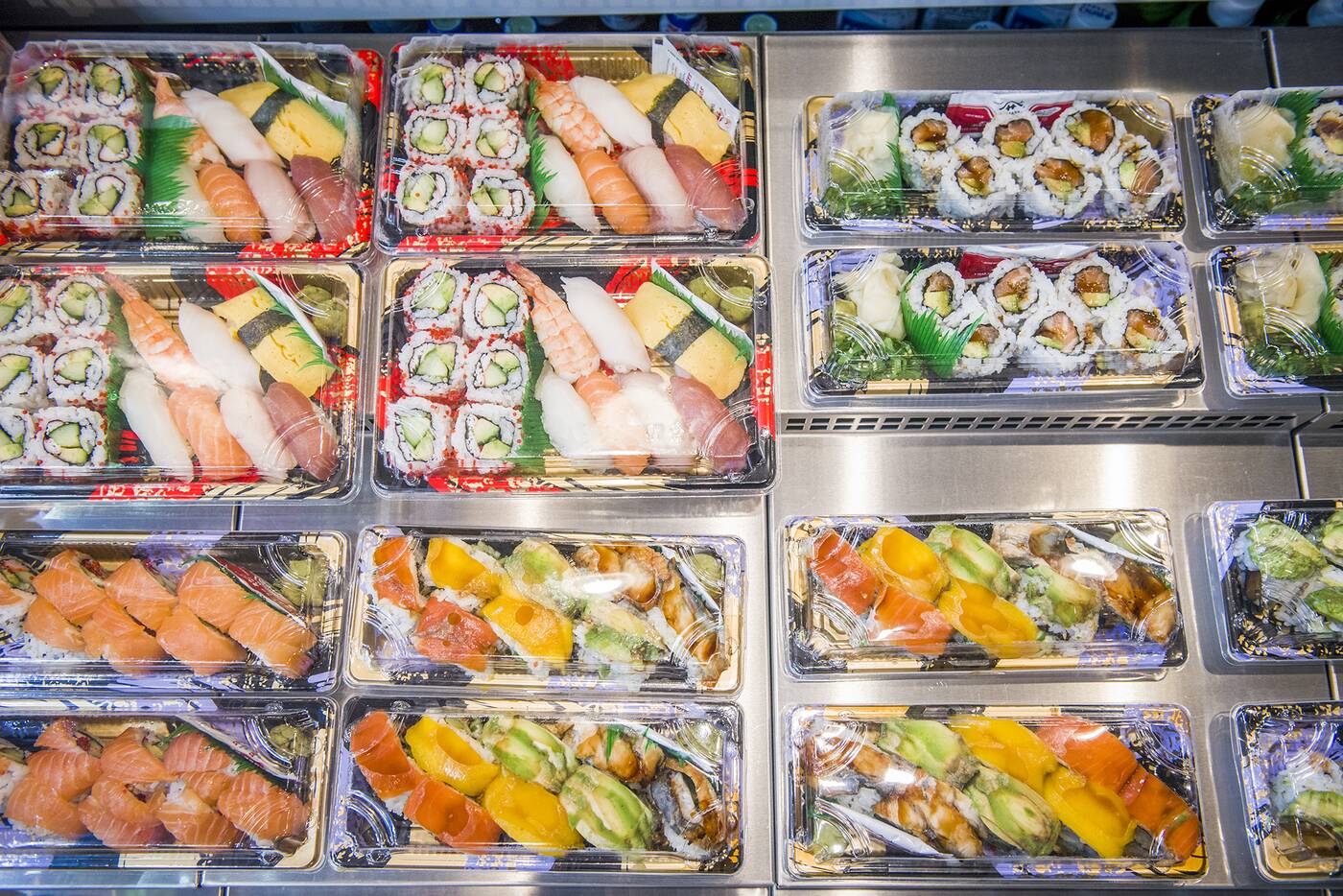 There are also some options for solo eating around the conveyor belt and in another cafe-like seating area off to the side, where available pre-made takeout trays of sushi or quick beverages could be enjoyed. 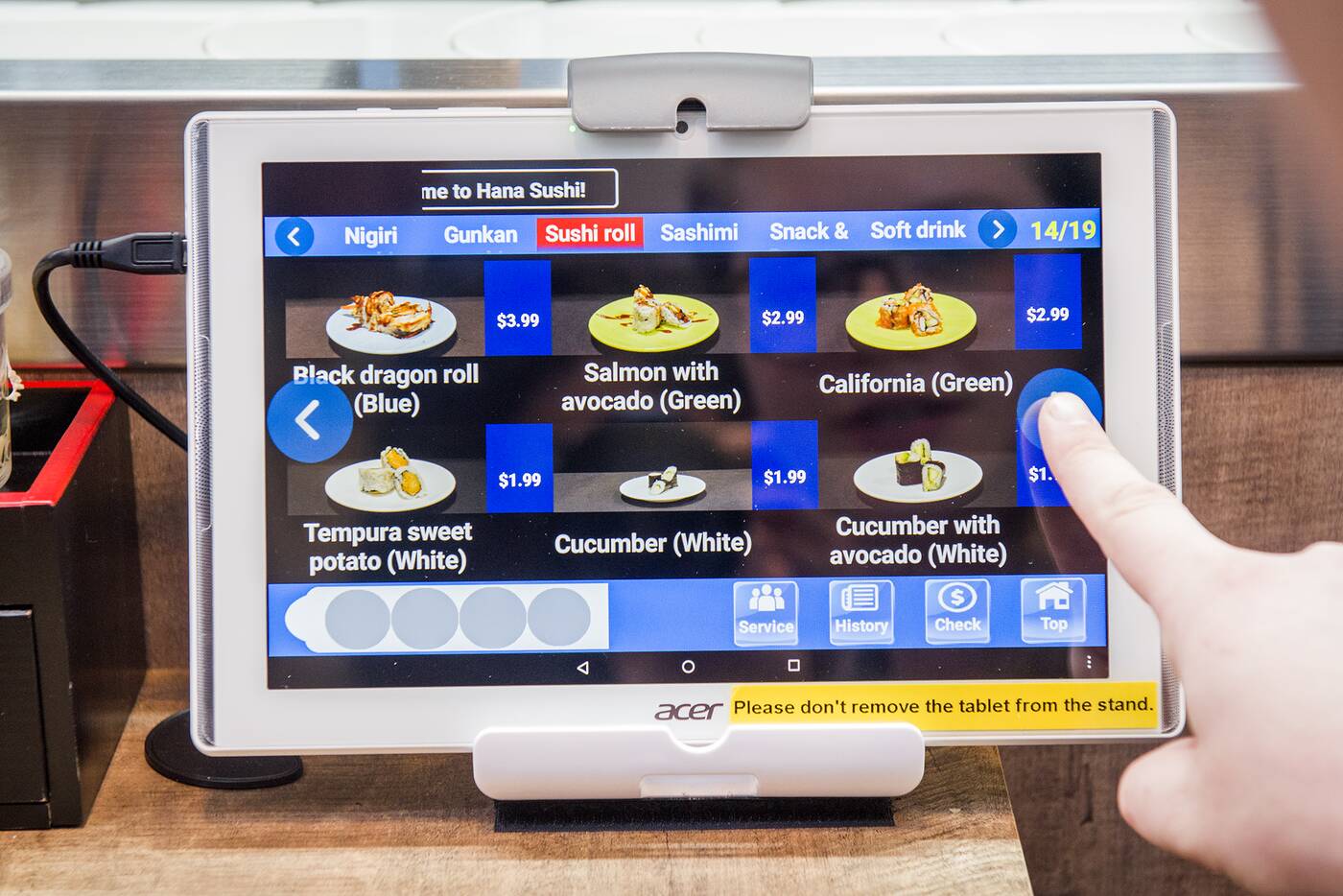 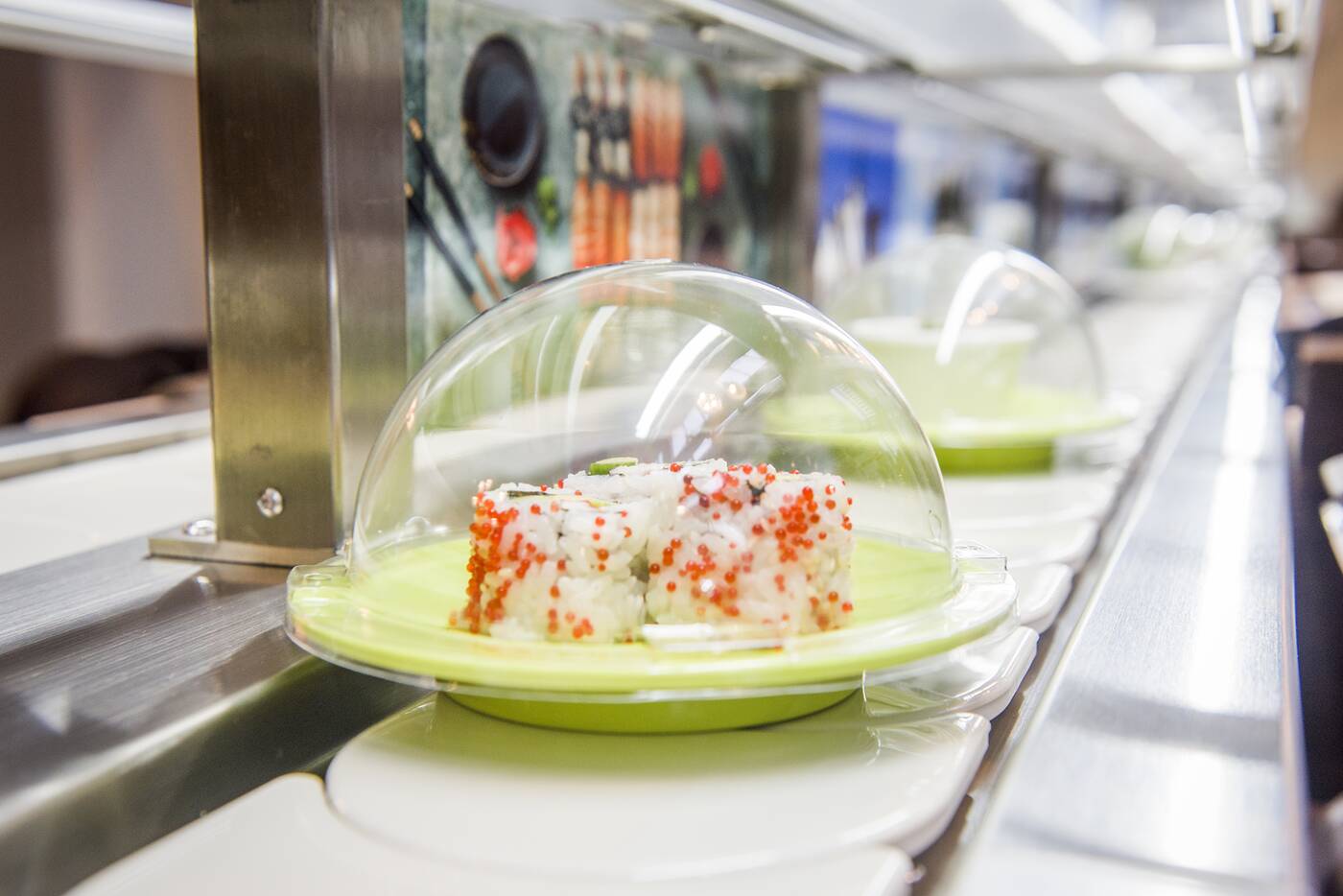 Items on the lower rotating conveyor belt are mostly cooked, or won’t lose freshness if they make a couple rounds before being picked up. Think little wakame salads and bowls of edamame along with the occasional nigiri or roll. 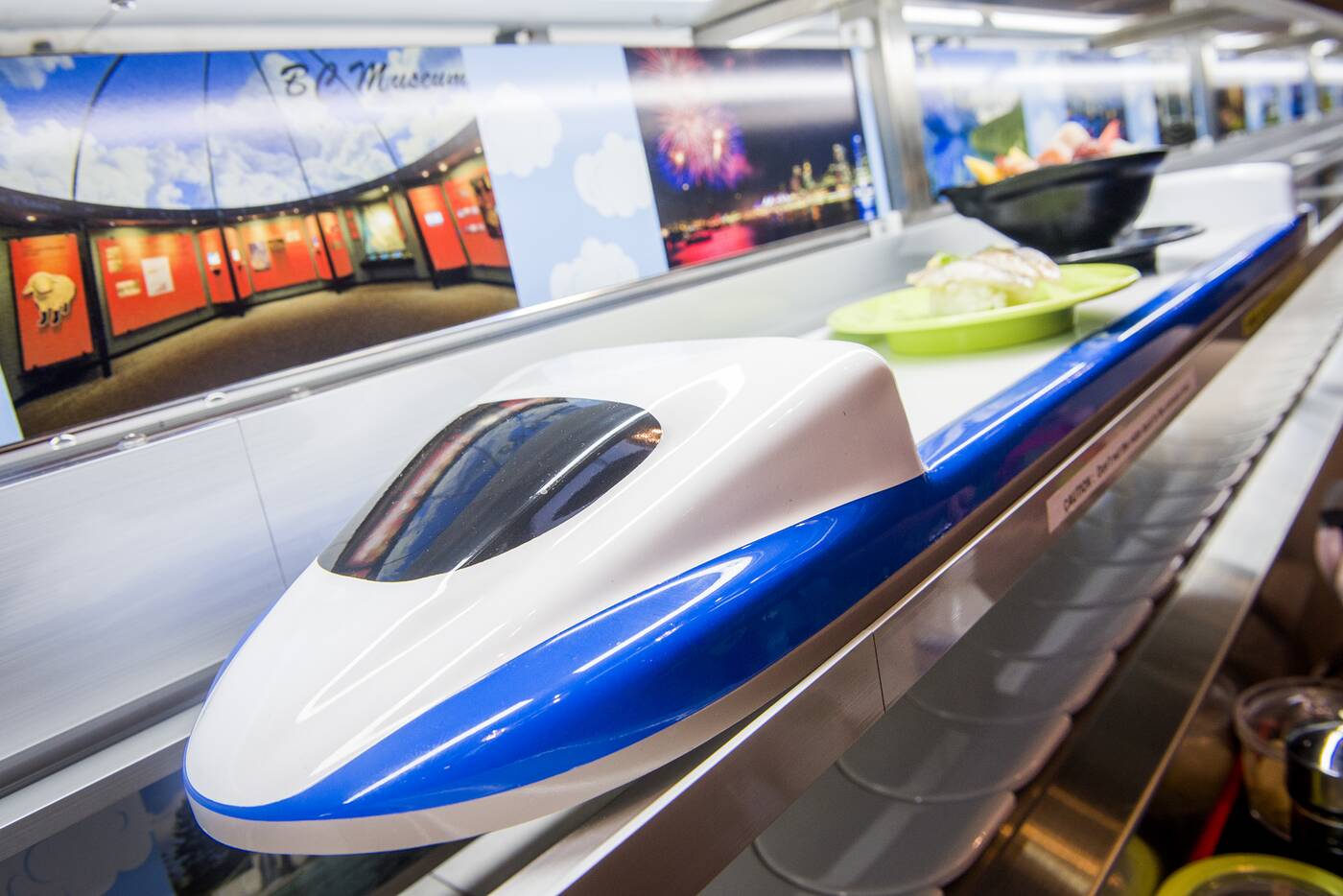 To get exactly what you want prepared fresh almost instantly, with zero time spent dying on a slow-moving belt, order through the iPad to summon a monorail loaded with your choices directly to your table. 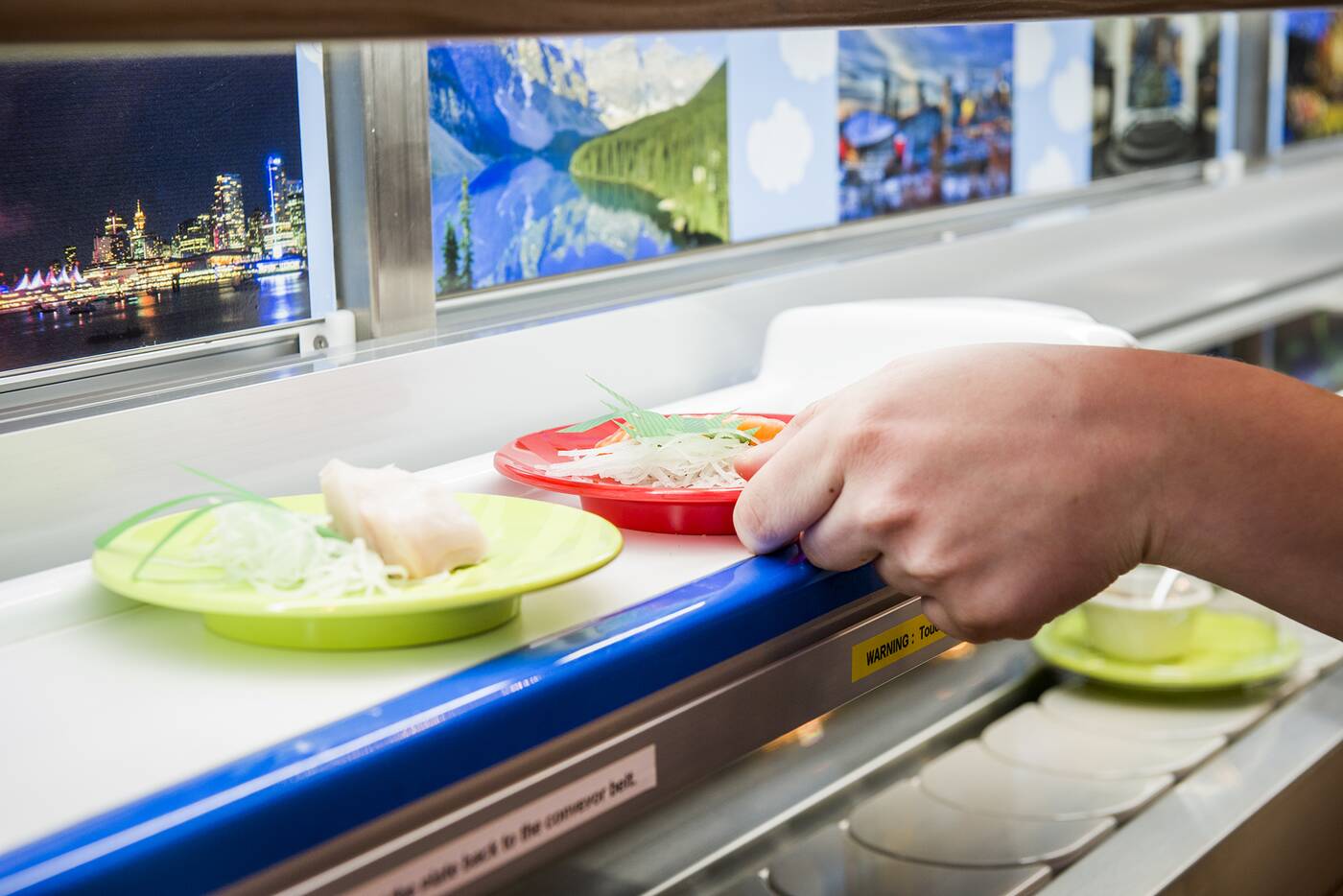 Order up to four items at a time this way. 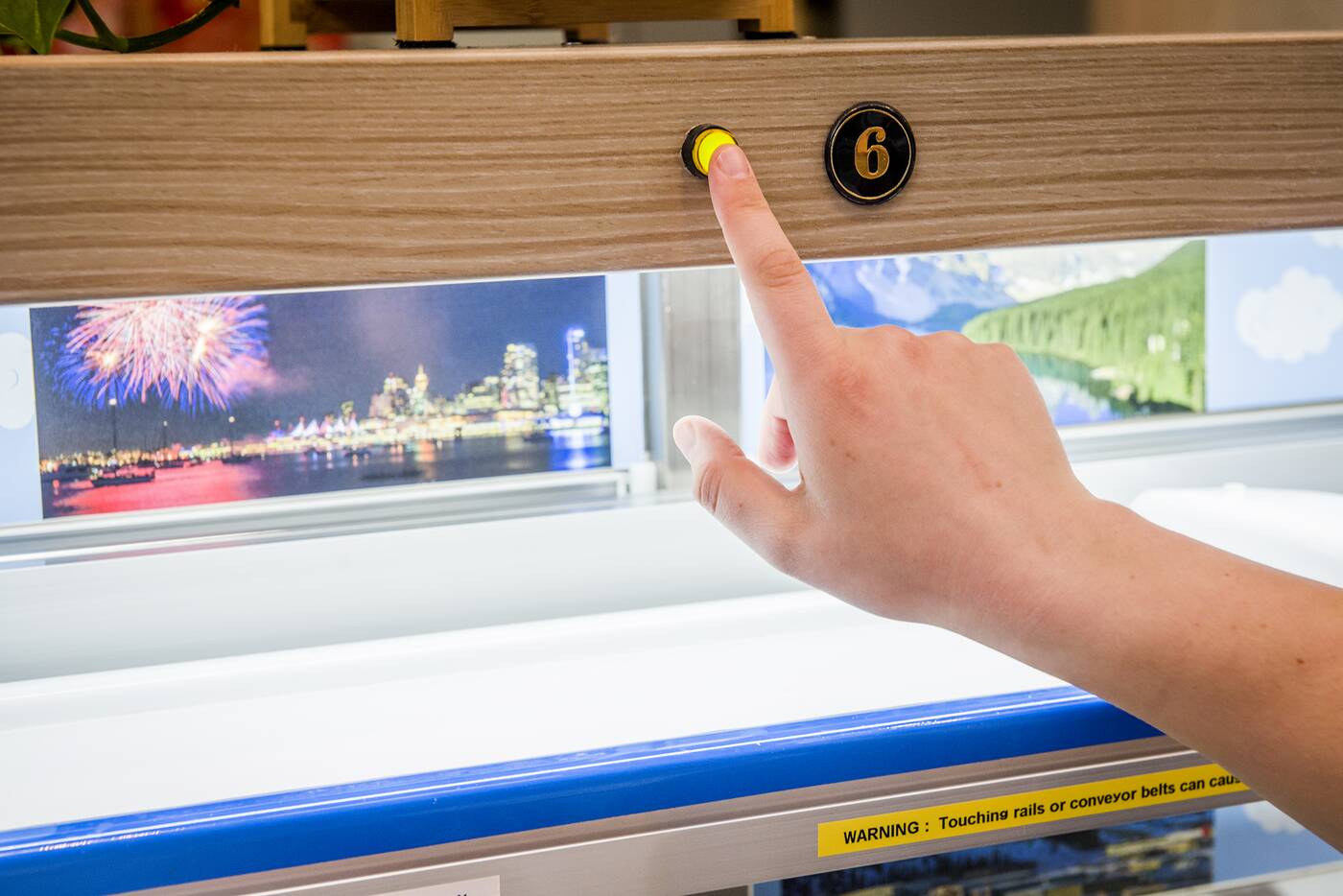 Once you’ve got your food, push a button to send the monorail back to the kitchen. 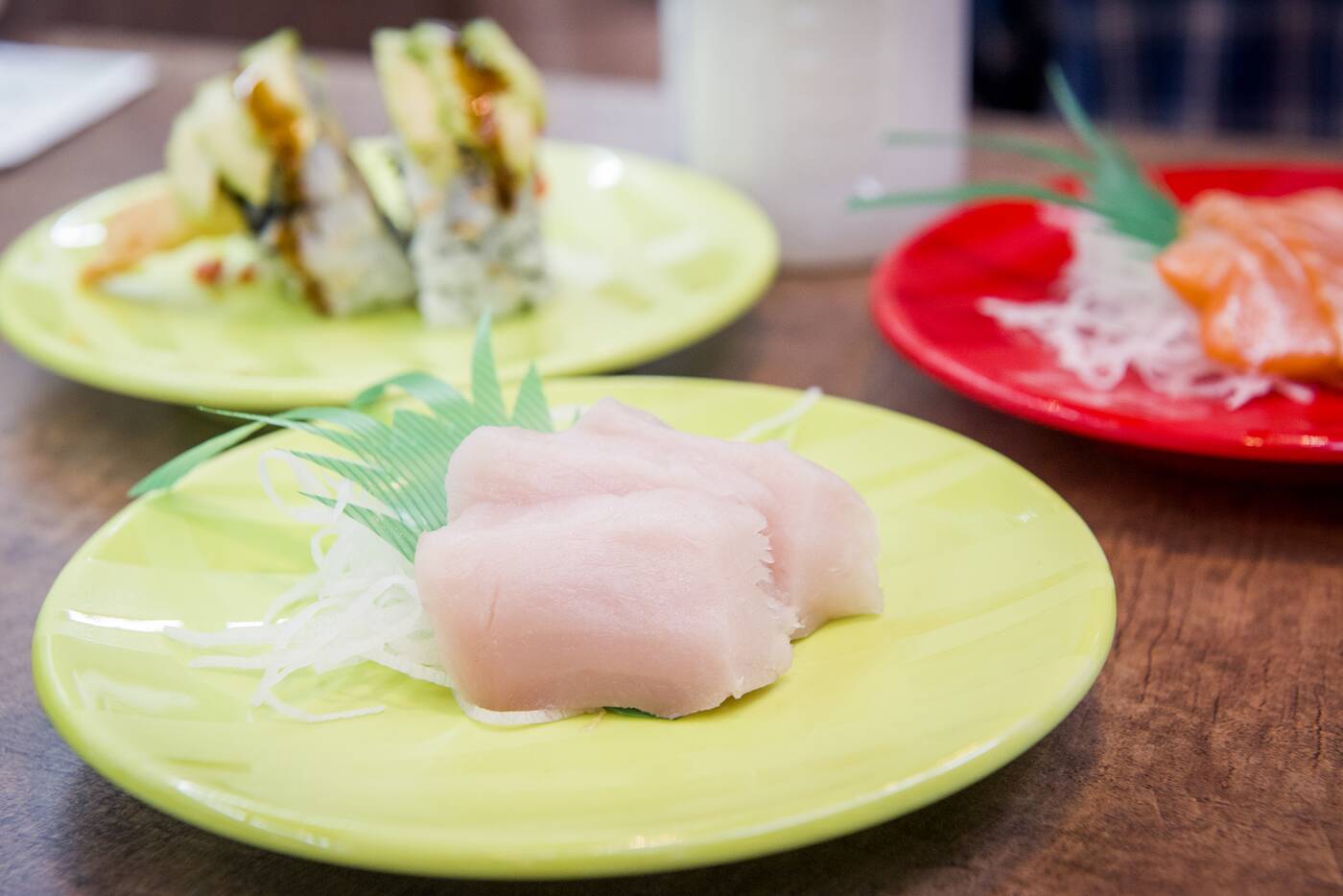 White tuna is delicate and a little flaky, light in flavour, simple and fresh. At about a dollar per piece this plate works out to a pretty fair deal. 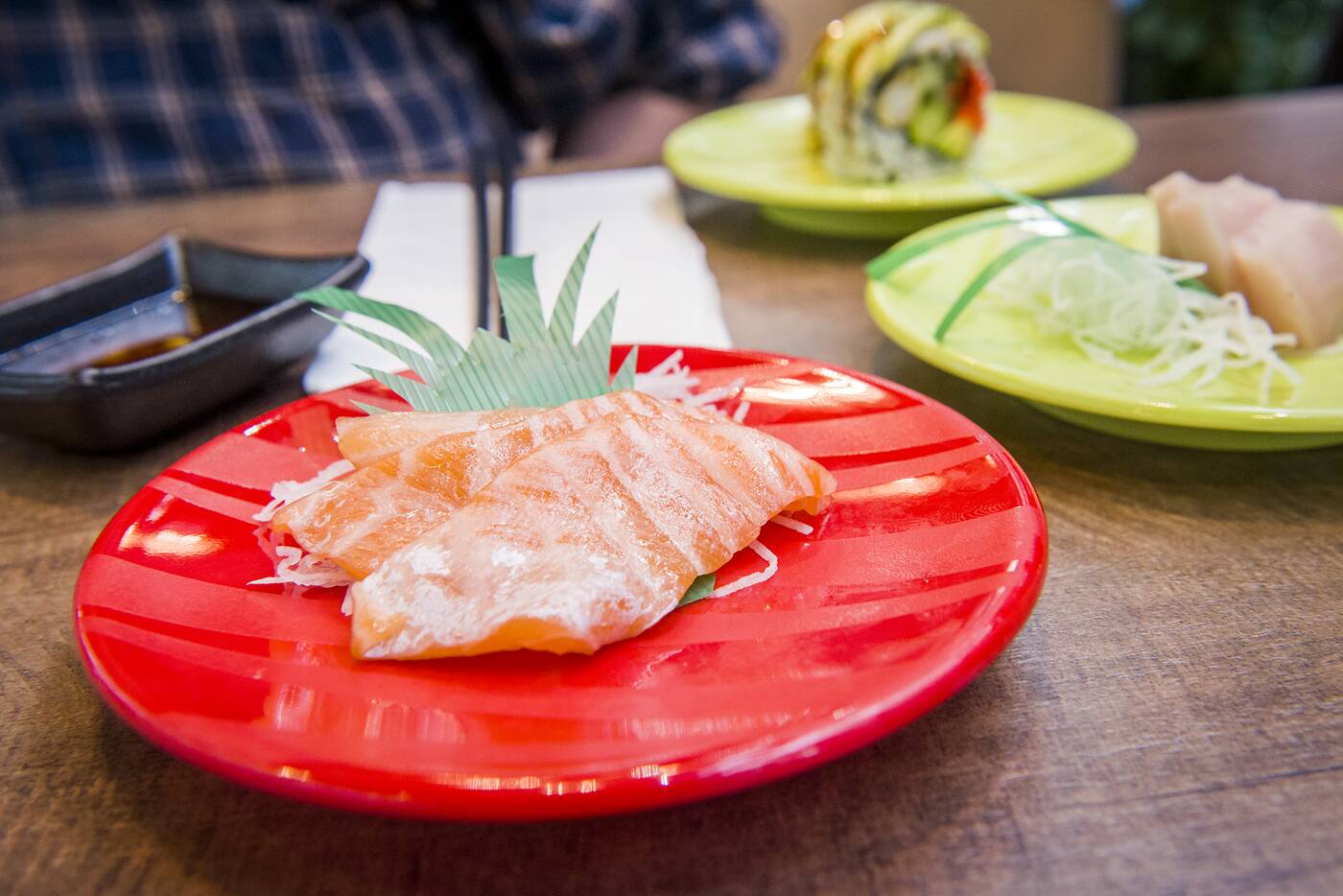 I’d really recommend the salmon belly, a little pricier for sashimi but it’s so flavourful, sweet and silky with attractive silvery sheen to the thinly sliced salmon. 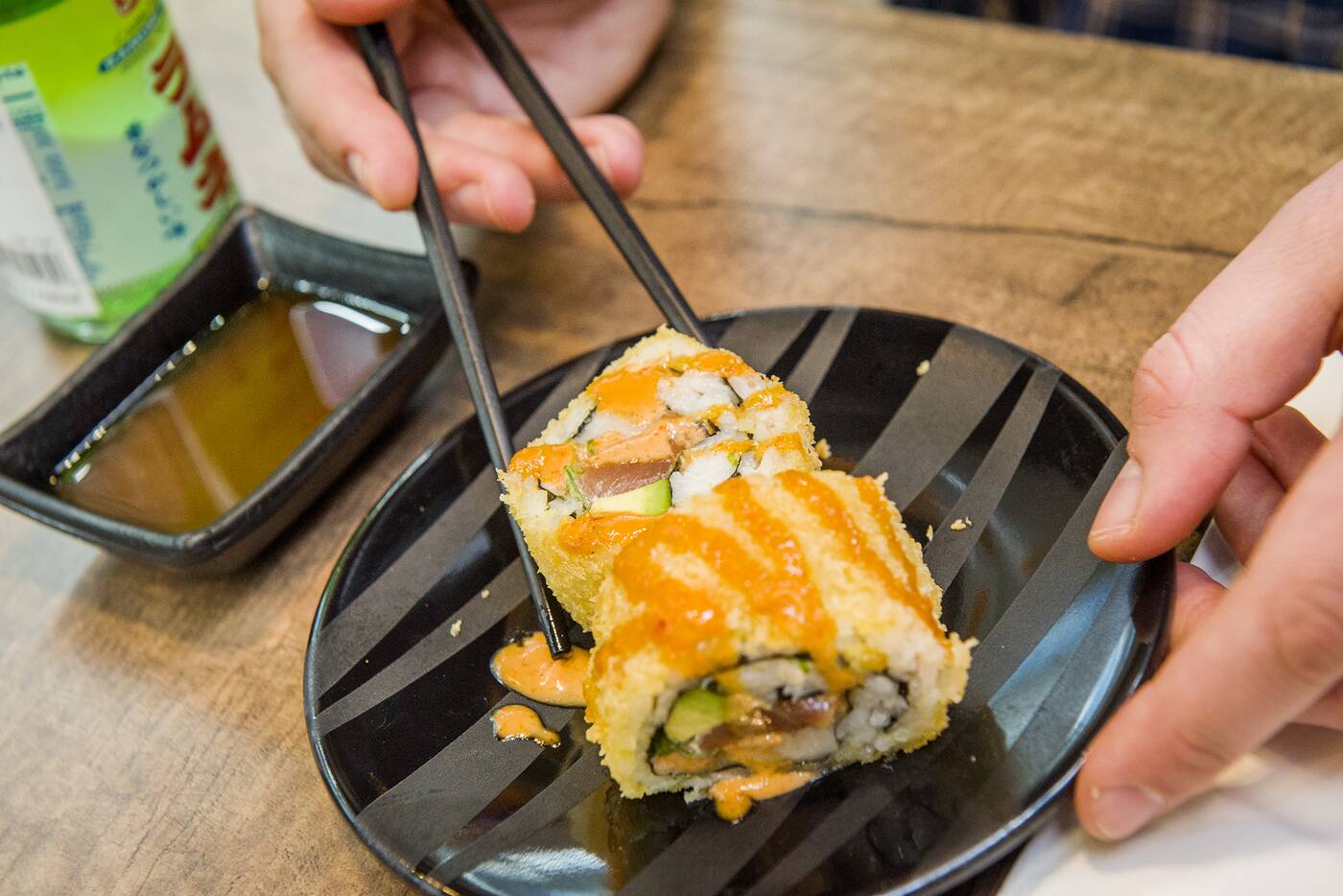 A Moscow Submarine roll is much pricier and far more unwieldy, the exterior crunchy coating making it tasty but difficult to pick up with chopsticks.

You’re probably better off using your hands to attempt to shove the giant drizzled roll stuffed with cheese, avocado and tuna into your mouth in one bite. 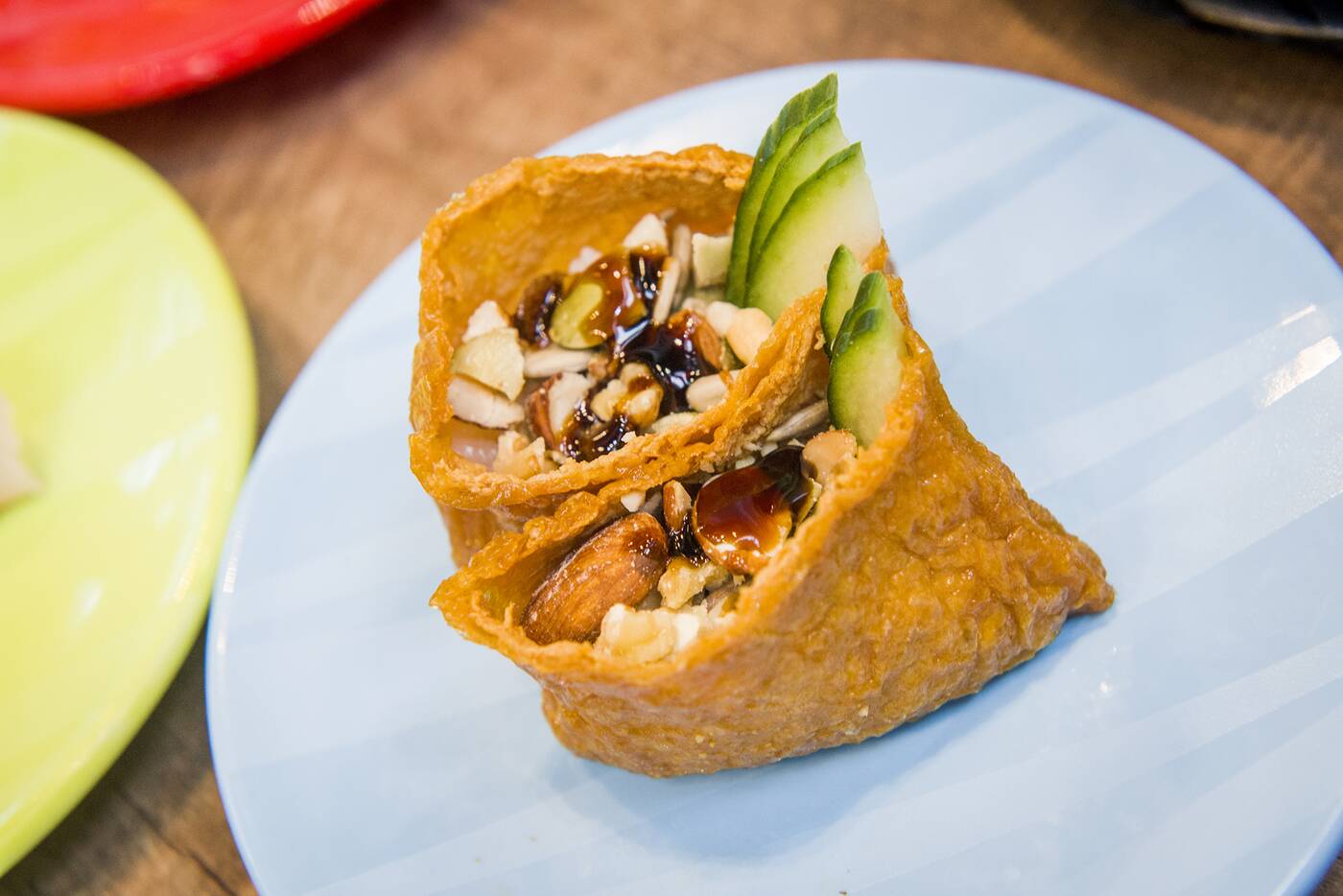 Nuts and inari is even more inventive, a soft, chewy tofu bag filled with crunchy chopped nuts and cucumber in a way I’ve never seen before. 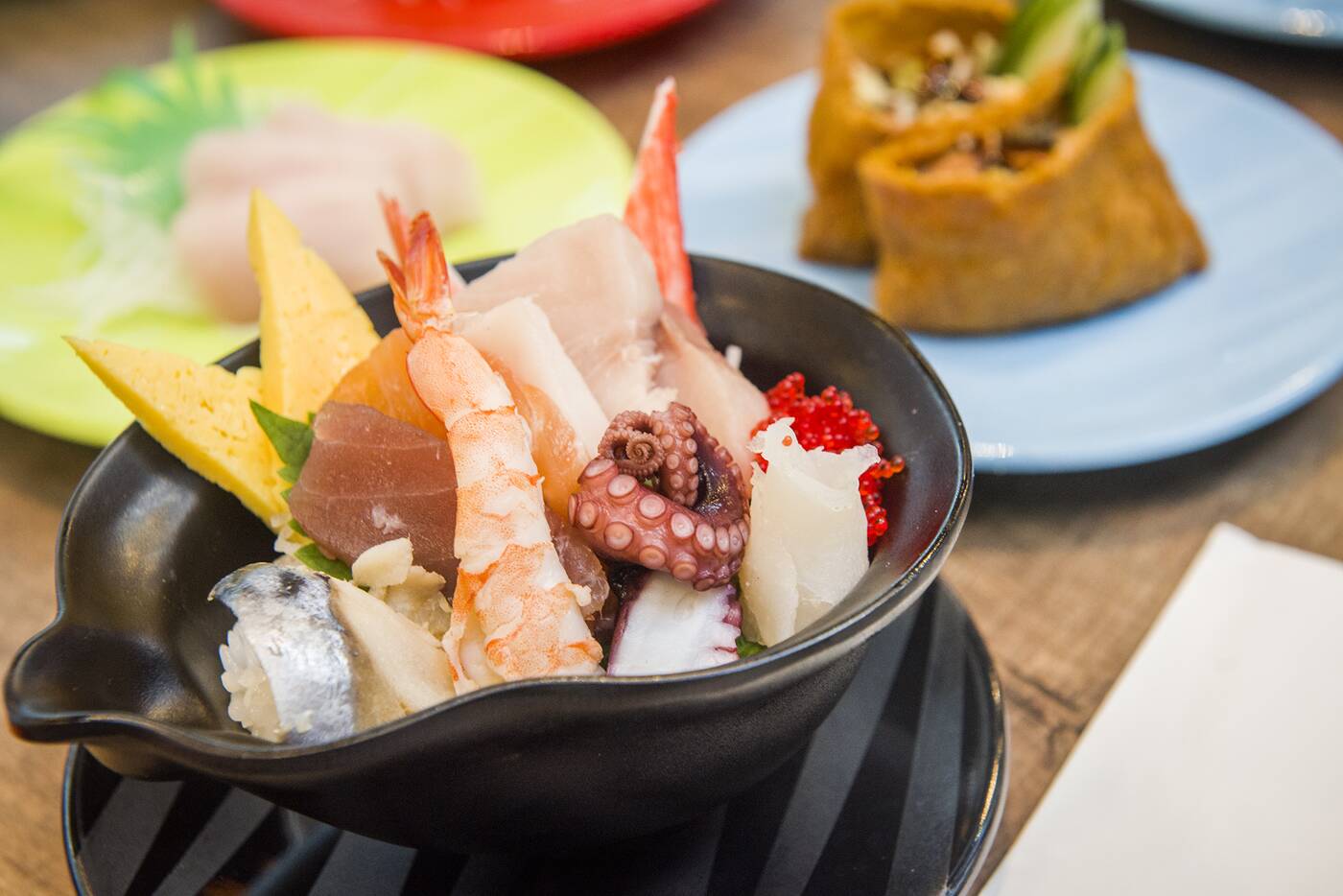 Hana Chirashizushi arguably gets you more bang for your buck, with salmon, tuna, octopus, mackerel, egg, crab, tobiko and shrimp all packed into a miniature version of a chirashi bowl. 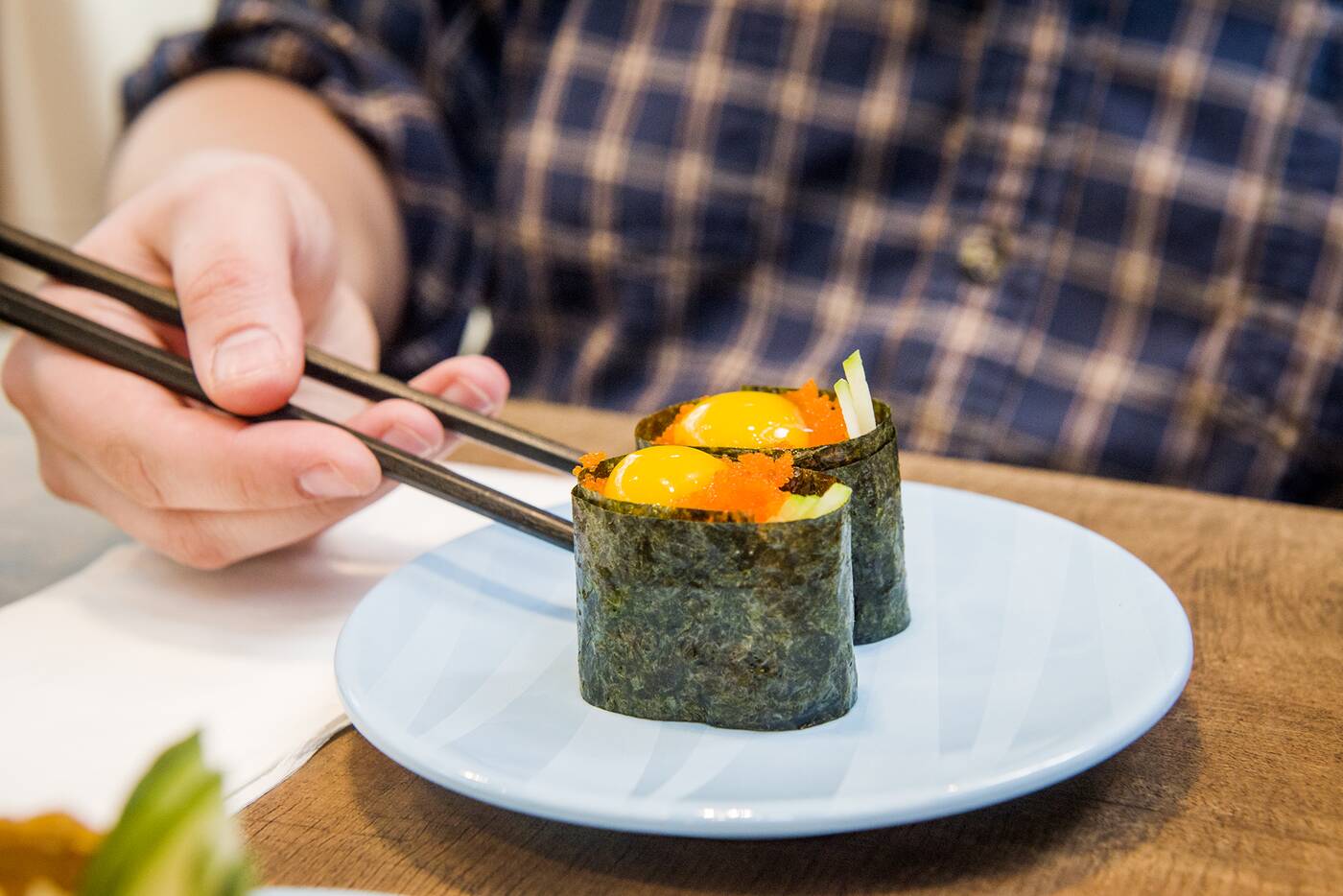 A quail egg and capelin egg roll is rich with texture for a mid-priced item. 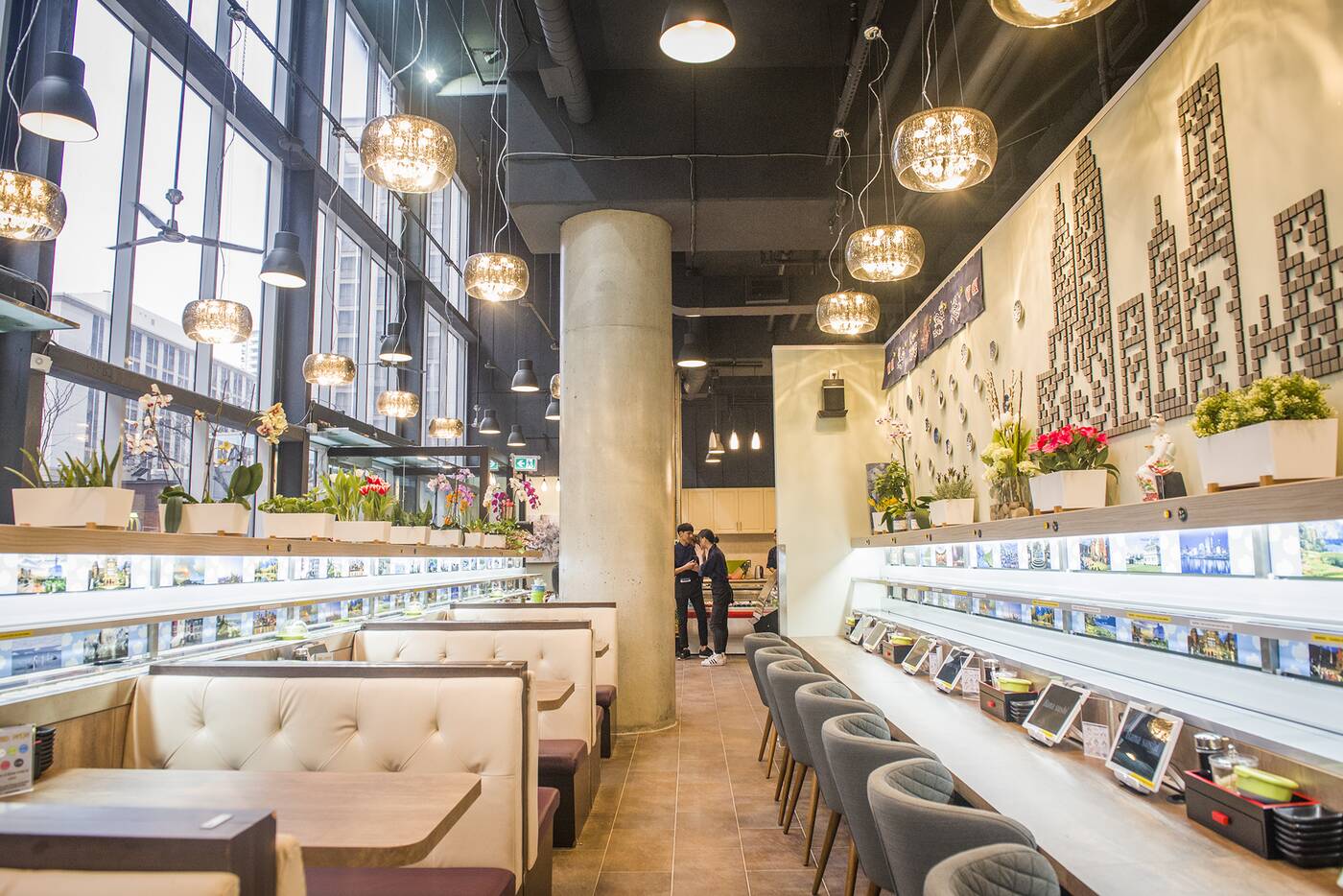 There are other options like roast beef or seared mackerel nigiri, but sticking to the classic sashimi, nigiri and maki is probably your best bet. 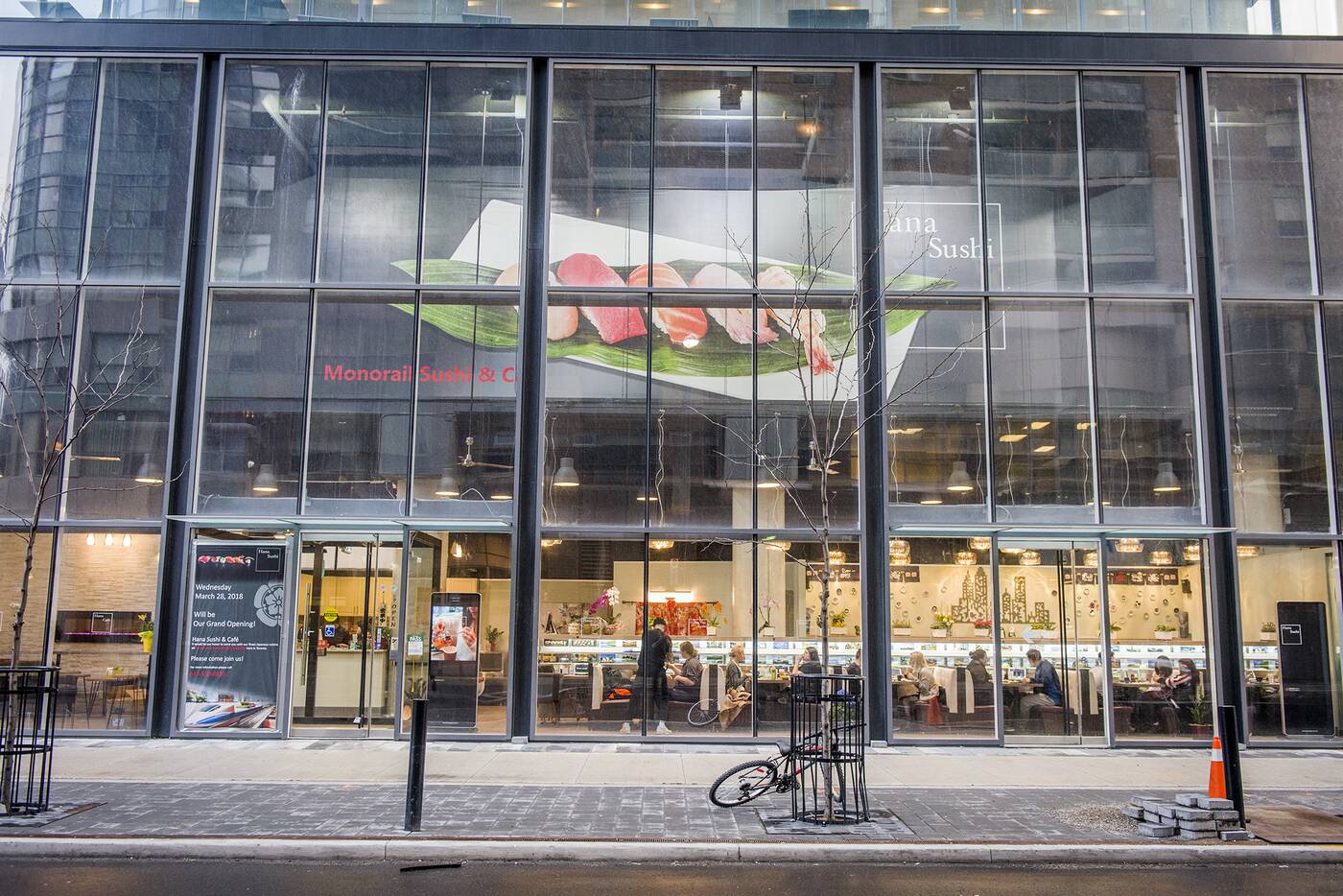