Gangster Burger has been open just under a week on Queen West , taking over the former location of a shawarma spot. It's the brainchild of Lee B. and Will Nguyen of FY Ink across the street, and began as a joke. You know the one--"hey, wouldn't it be wild if we opened up a burger joint?"--but when the location went up for sale, they swept in and quickly brought on friend Adrian Forte as the chef.

After opening last Friday, they scored a surprise appearance by none other than Drake , prompting a wave of girls shyly inquiring after which burger he'd had (the veggie option) and whether he'd enjoyed it (a resounding yes). 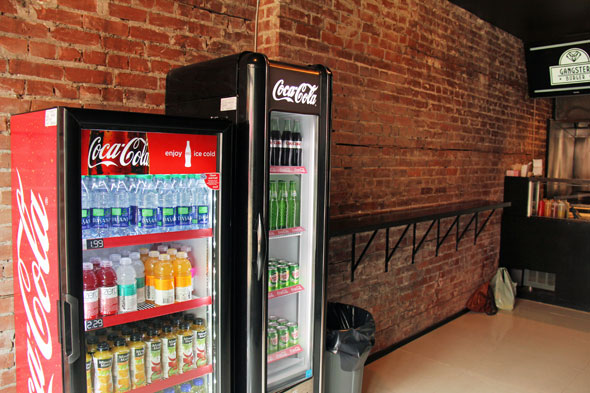 The interior is sleek, if somewhat cramped. Designed to be purely a take-out spot, it's a long and narrow passage to the counter, flanked on one side by a very slender wooden beam--better for leaning an elbow on than trying to chow down-and collaged wallpaper of famous gangsters and their various molls lending an almost seedy veneer to the other.

Just to clarify: the shop is not "gangstah," but rather "gangster," and it tries to channel some semblance of the irreverent class that made gangsters of yore so rakishly irresistible. To that end, you'll hear classic tunes spilling from the speakers during the day, with an about-turn to hip-hop at later hours. Their mandate is to "make you a burger you can't refuse," and judging by the line-up that coalesces almost out of thin air as soon as 5 p.m. rolls around, it's working. 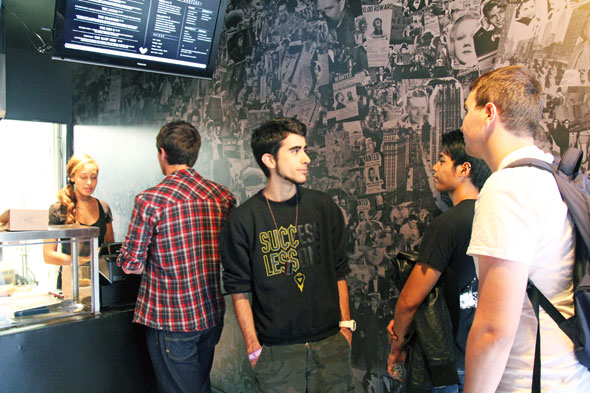 Forte tells me that everything is handmade--from the fries, to the hand-formed patties, to the array of truly memorable sauces--and ingredients are sourced from Kensington Market . All burgers are 6 oz beef patties, with the exception of the Eliot Ness (of The Untouchables ), a 4 oz. portobello mushroom cap brimming with marinara, and finished with smoked provolone, chipotle mayo, lettuce and tomato.

I'm a sucker for flavour, so I opt for the Capone and the Dillinger. Now, I was told that they've had some trouble settling on kitchen staff, after a former employee served up a burger sans patty, which might explain what happened. 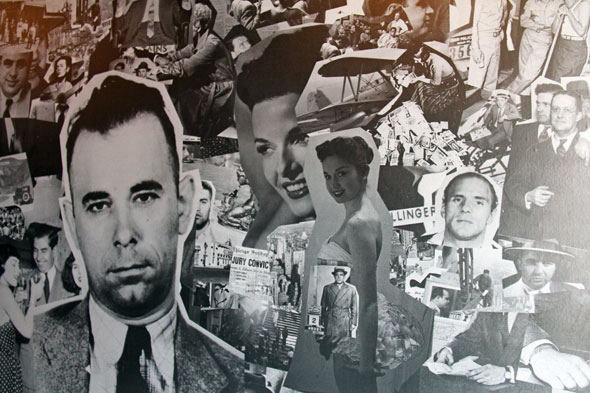 The Dillinger ($7.39) was meant to be an homage to the romantic man of crime in name only--dill havarti, caramelized onions, chipotle mayo, the shop's ubiquitous 'gangster goo,' bacon, lettuce and tomato. What I actually unwrapped was the latter three ingredients only, on a patty so charred that I only ate half. The bacon had also been left too long on the burner, and not even a generous slathering of sauce could rescue what might've otherwise been a quality whopper. 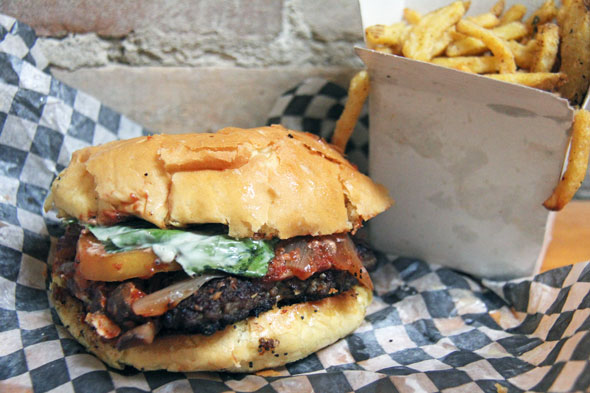 The Capone ($7.99) fared much better, although the array of sauces somewhat deflated the bun even on my 5-minute commute home. Smoked provolone, and mushrooms, onions and roasted red peppers sauteed in a marinara sauce, finished off with lettuce, tomato, and a garlic aioli sauce came together nicely for a subtle complement to the well-cooked (read: not burnt) patty. The marinara was maybe too zesty a choice, and distracted from the rich smokiness of the other flavours. 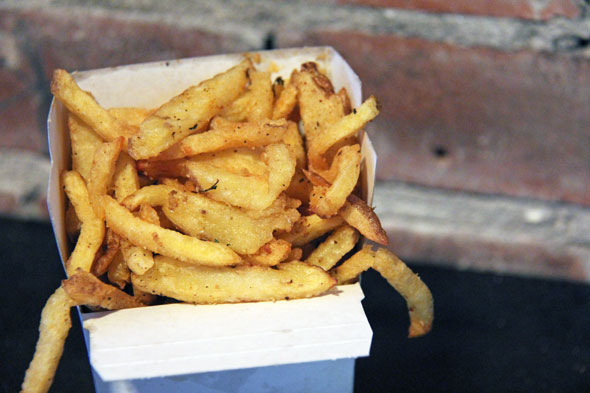 The sides are, as far as I'm concerned, both stand-outs. The fries are hand-cut Yukon potatoes, tossed in an herb blend of garlic, thyme and peppercorns, and served with your choice of dipping sauce. My vote is for the gangster goo--a spicy ketchup that, while simple, delivers punch. Forte tells me the other favourite is the blue magic, whch is named after Frank Lucas ' old-timey brand of cocaine. Enshrouded in mystery, everyone hazards a guess as to which cheese is front and center in the dip; I'm going to stand by asiago although Forte has already smilingly denied it. 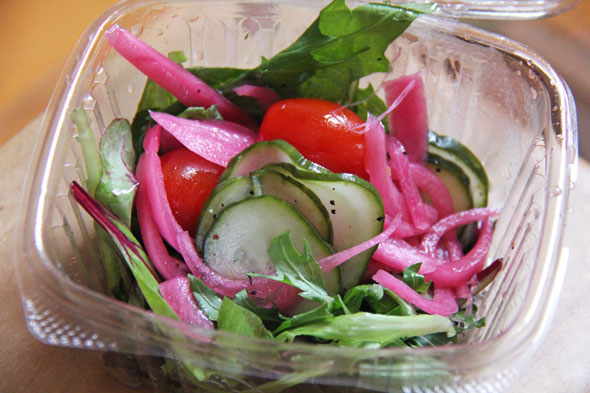 Forte is a veritable wizard with dressing. The salad ($3.05) itself is a simple blend of spring mix, cherry tomatoes, and beautifully tart pickled onions and cucumbers. I sample each of the dressings--jalapeno ranch, grape soda vinaigrette and honey lemon vinaigrette--and the last is a clear winner. It's lip-puckering and a definite wake-up call for your tastebuds. 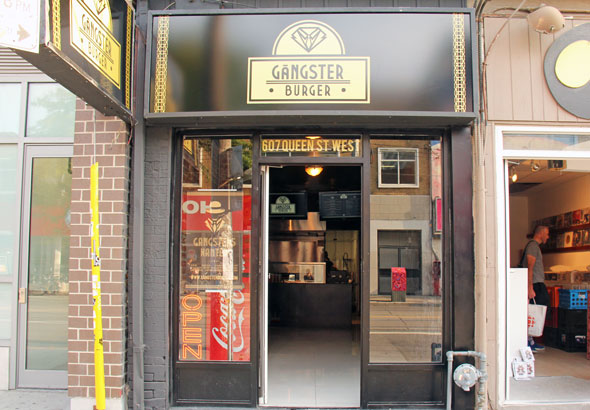 Coke and Sprite are available in retro glass bottles ($2.29), and there's also Vitamin Water and juice, which you can add to your burger as a combo, along with a side, for an even $4.