The Federal just celebrated its 10th anniversary as the neighbourhood spot for classic brunch fare in Dundas West. 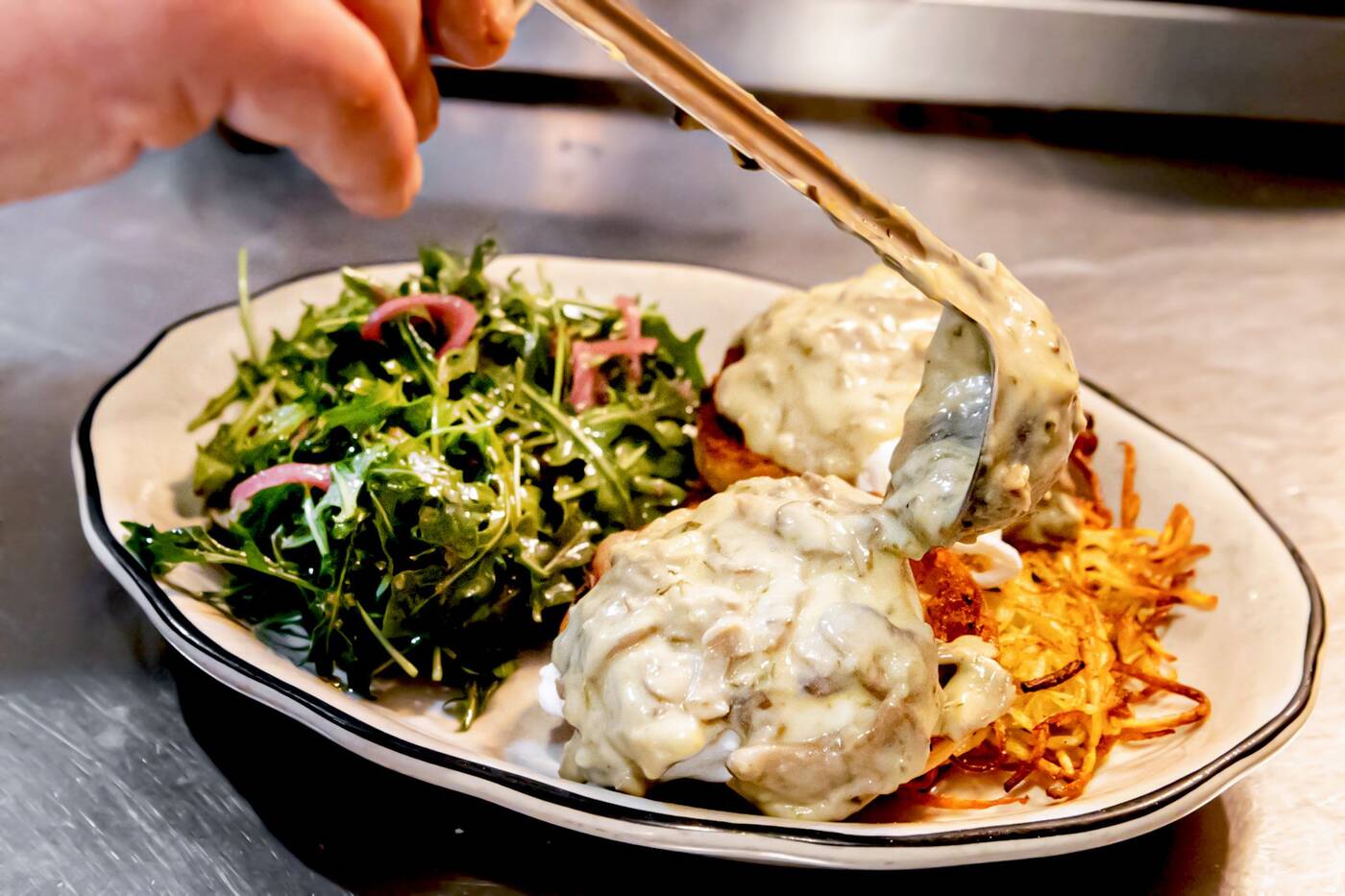 The restaurant opened in March 2012 by four owners, Zach Sootsky is the last one remaining today.

Back then, Sootsky was working at Le Swan and often biked by the empty space that is home to The Federal now. Previously the building belonged to Zoot's Cafe, a coffee and pastry shop. 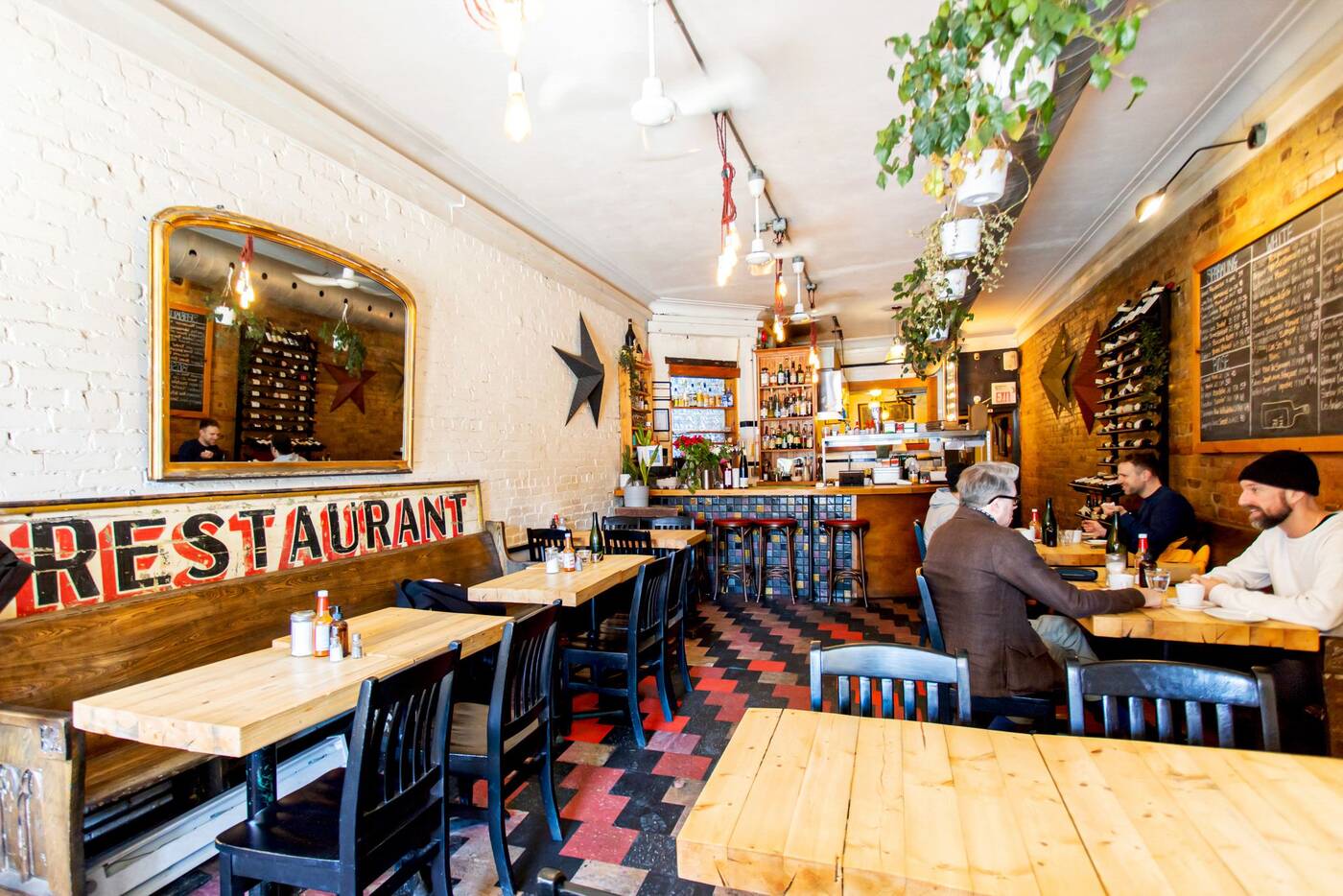 The owner says he saw possibility for a successful business, even when it was just bare bones of the building.

The space has kept its vintage charm since the days of Zoot's. However, a slew of antique items passed down from closed restaurants around the city have been added, like a snake plant from Aunties and Uncles. 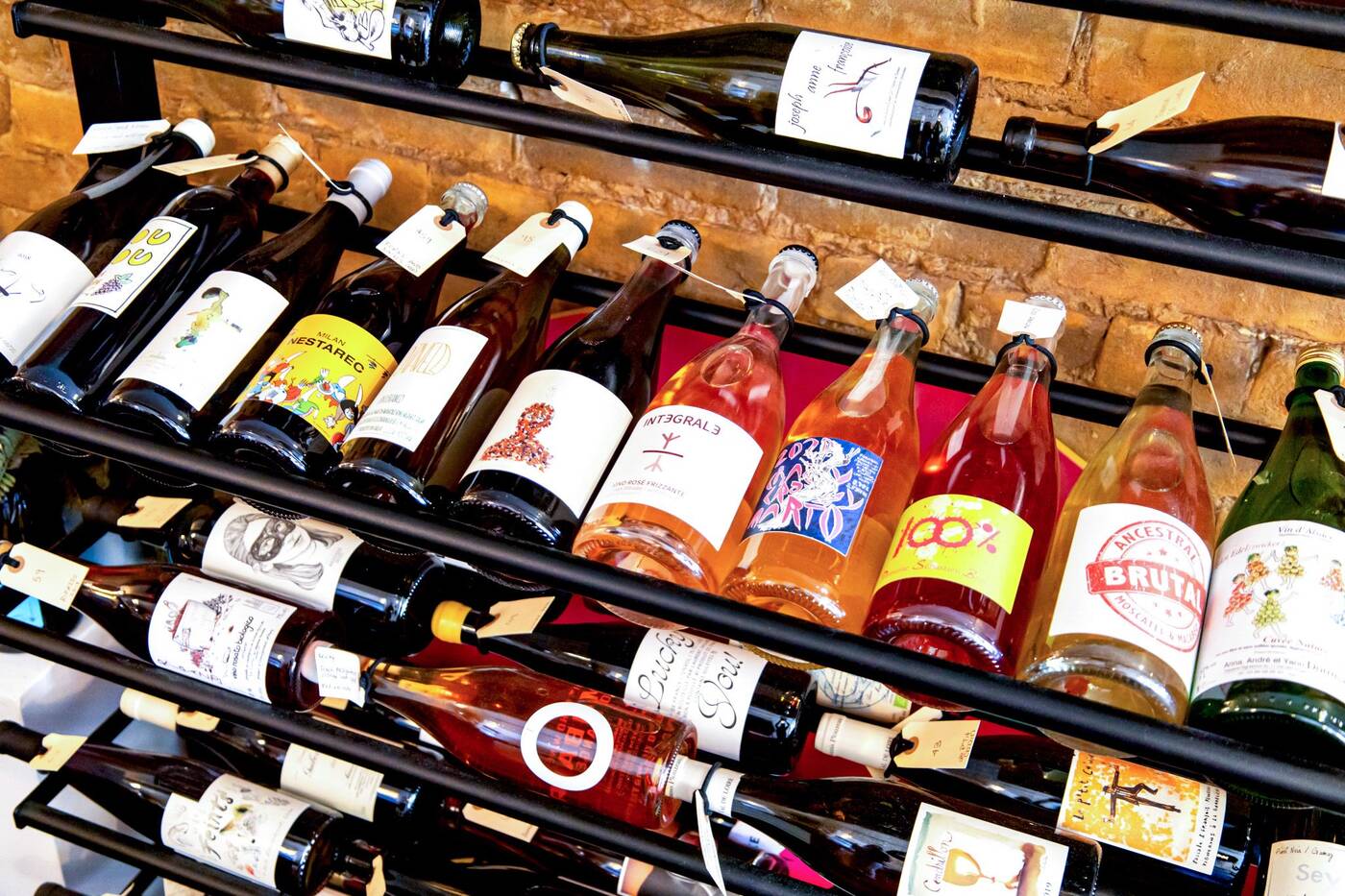 Get here a little earlier than normal, the brunch hour between 11 and 12 tends to fill up quickly and the restaurant doesn't take reservations.

Take advantage of the collection of natural wines that Federal started selling through the pandemic. They offer free delivery on customized packs of bottles. 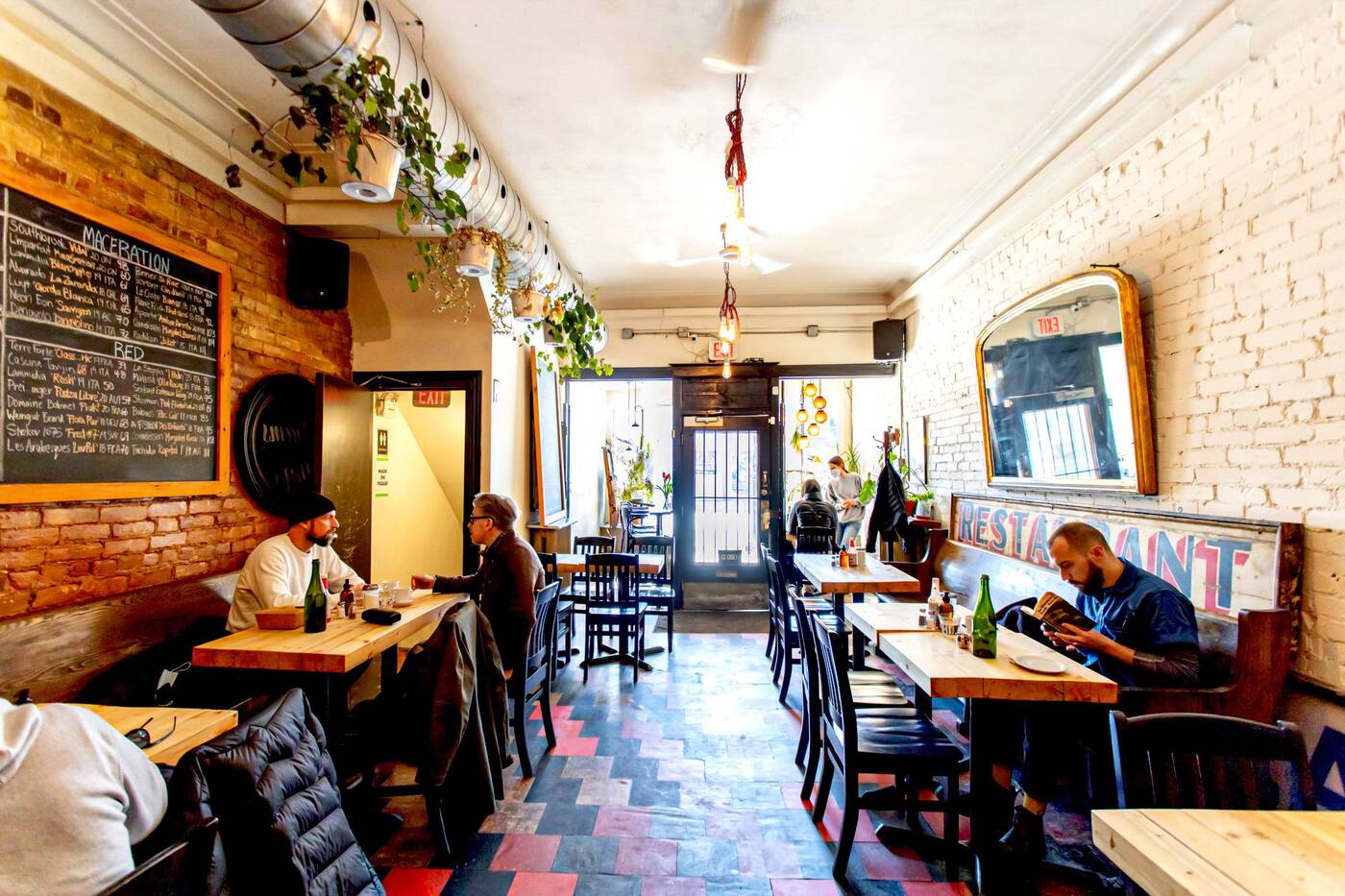 The rest of the interior is adorned with what reminds me of 70's nostalgia. Orange drop lights in the breakfast nook near the front, mismatched tiled floors, and exposed brick walls.

Antiques aren't the only thing that's been passed on to The Federal, recipes from classic Toronto restaurants have also made their way onto the brunch menu here. 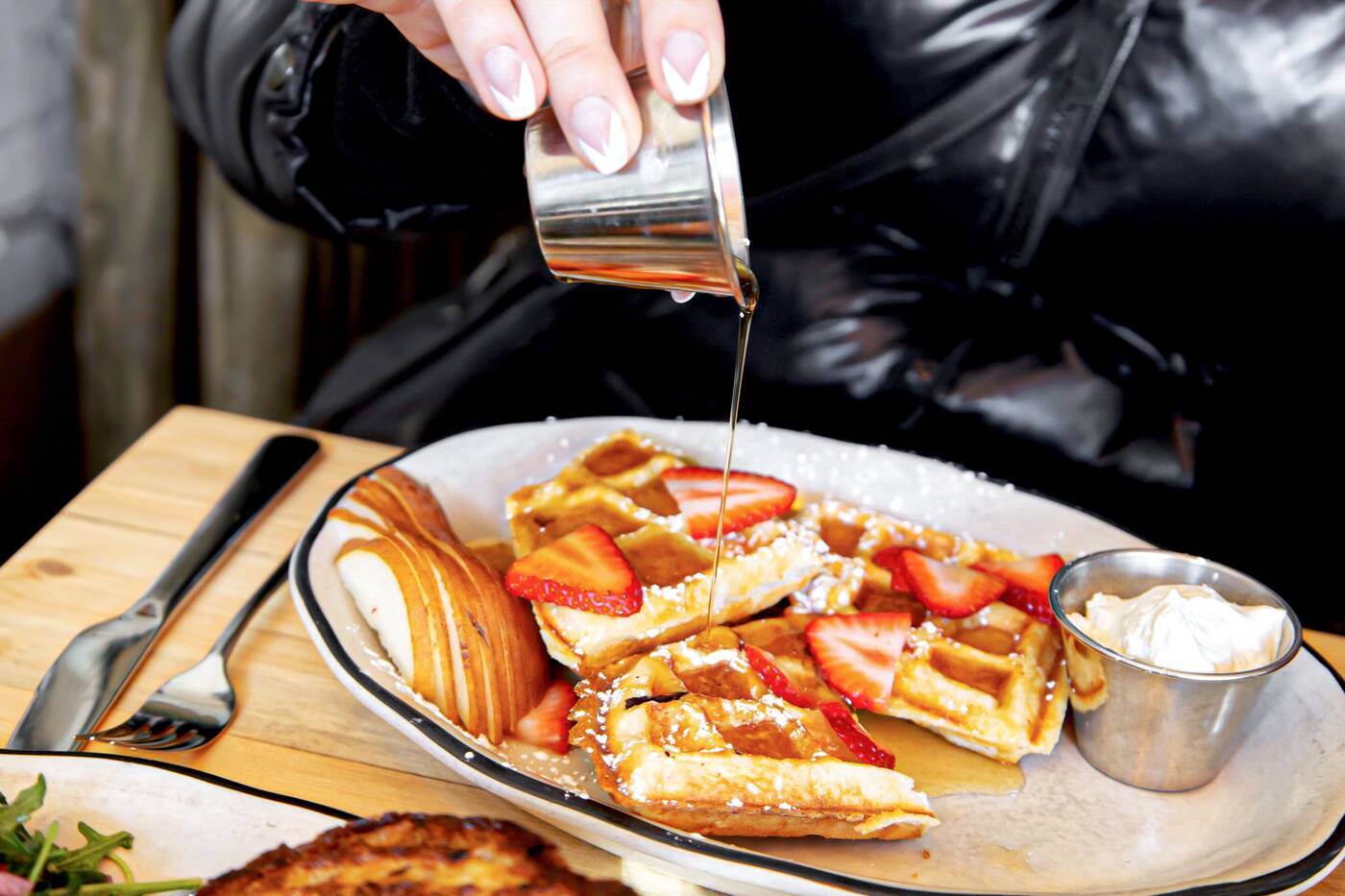 The original recipe for the Belgian Waffles ($13.00) was created by the chef at Le Petit Dejeuner. Served crispy and hot, but maintain their crunch even with a bunch of syrup poured on top. 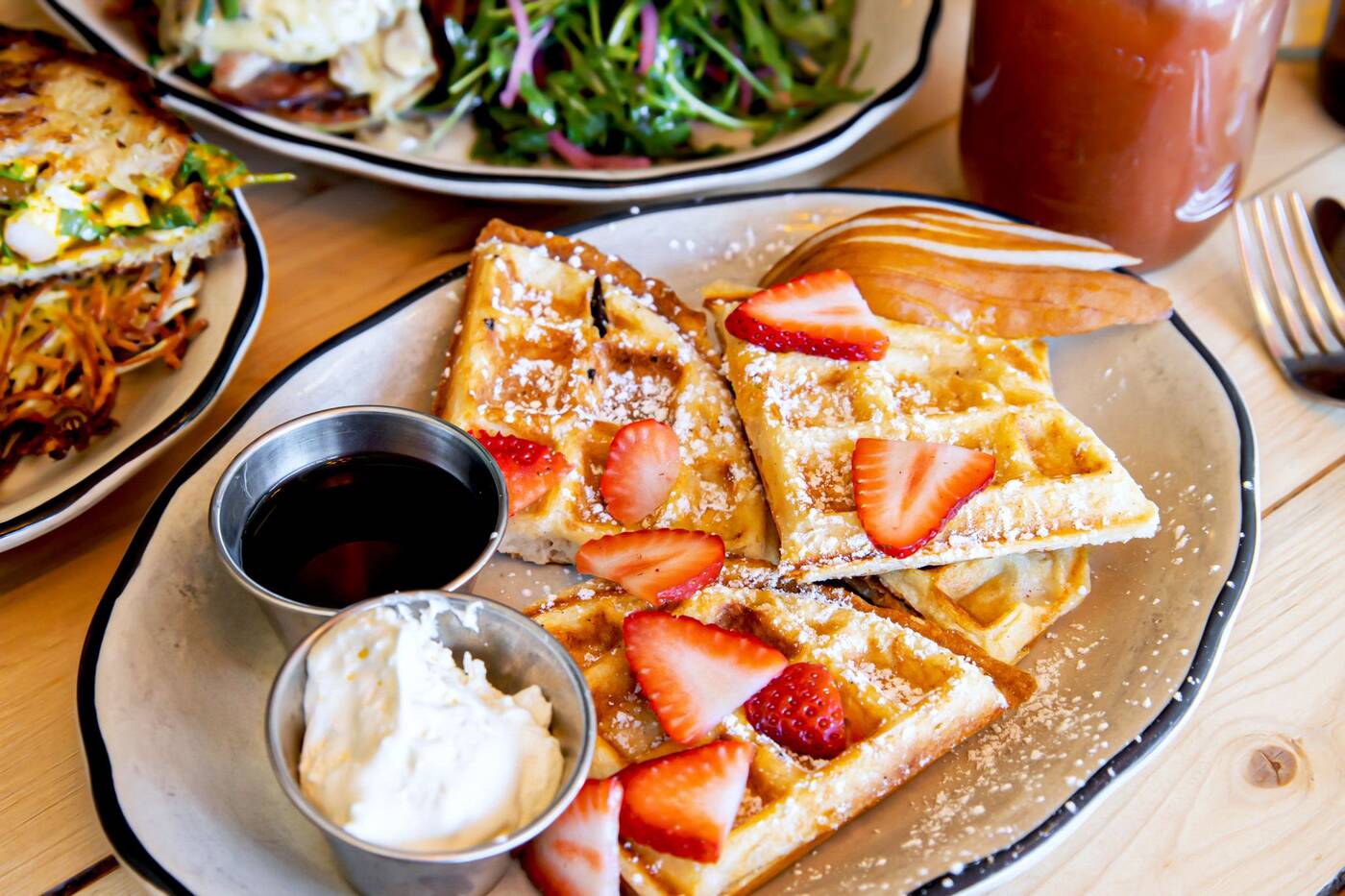 Fresh strawberries decorate the top, with a serving of lemon cream, maple syrup and sliced pears on the side. 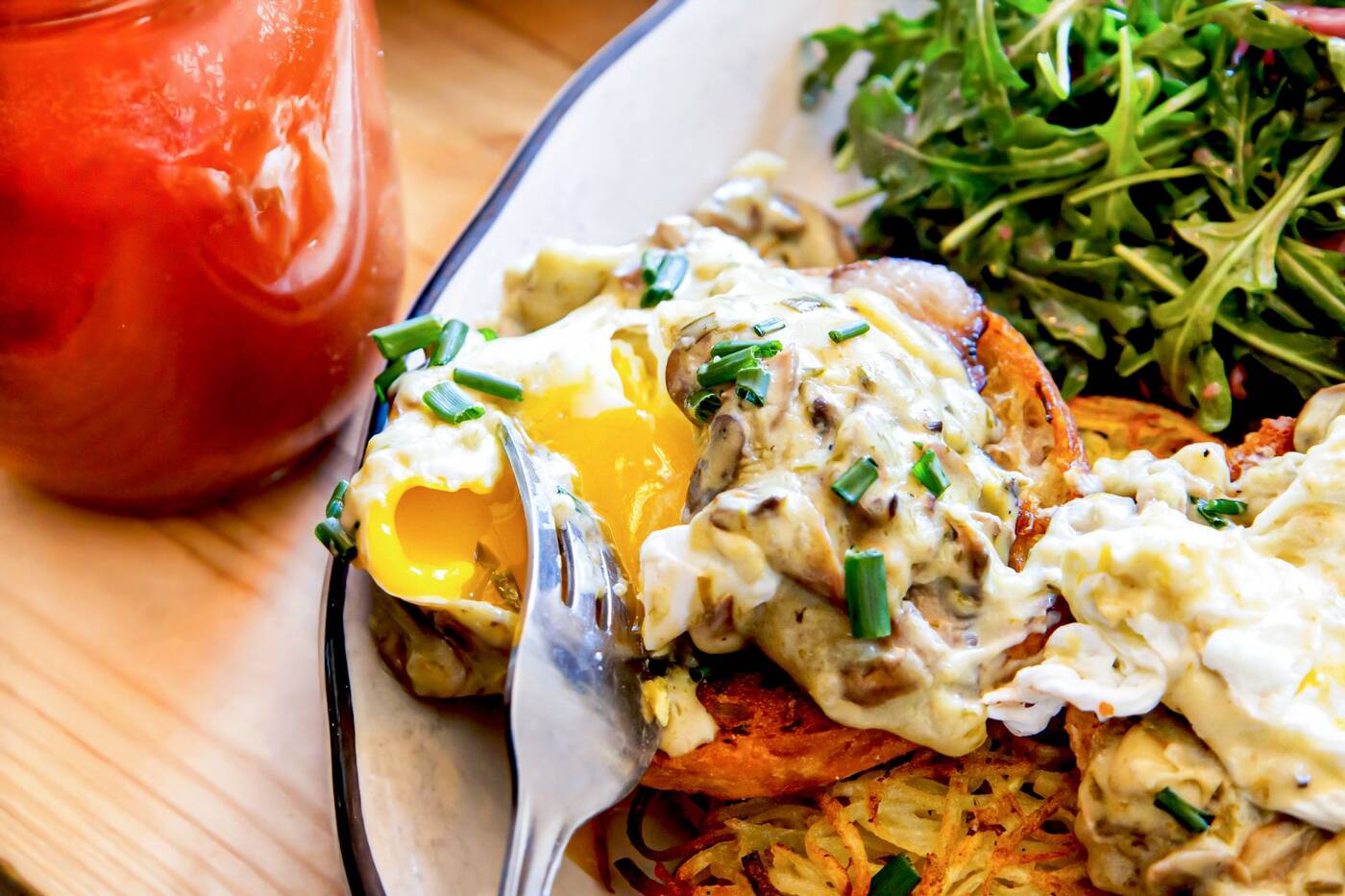 The Eggs Federal ($16.00) has been a staple on the menu since the restaurant opened. Two English muffins are topped with pieces of bacon (or kale if you prefer), poached eggs and mushroom cream, acting like a hollandaise sauce. 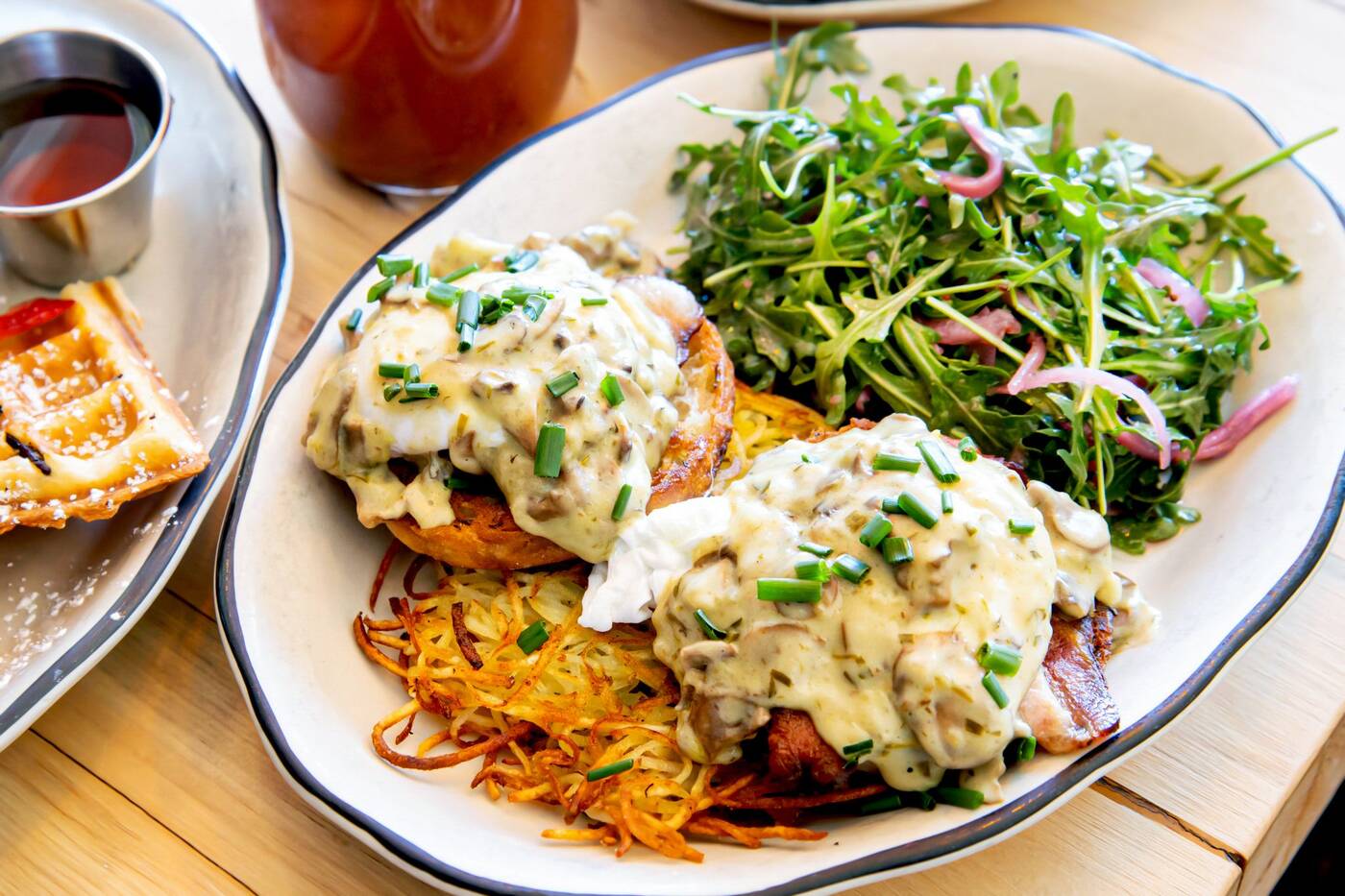 With each bite, you'll get a taste of stringy hashbrowns that sit underneath the eggs benedict and soaks up the mushroom cream nicely. Fresh arugula salad with pickled onions is your second side. 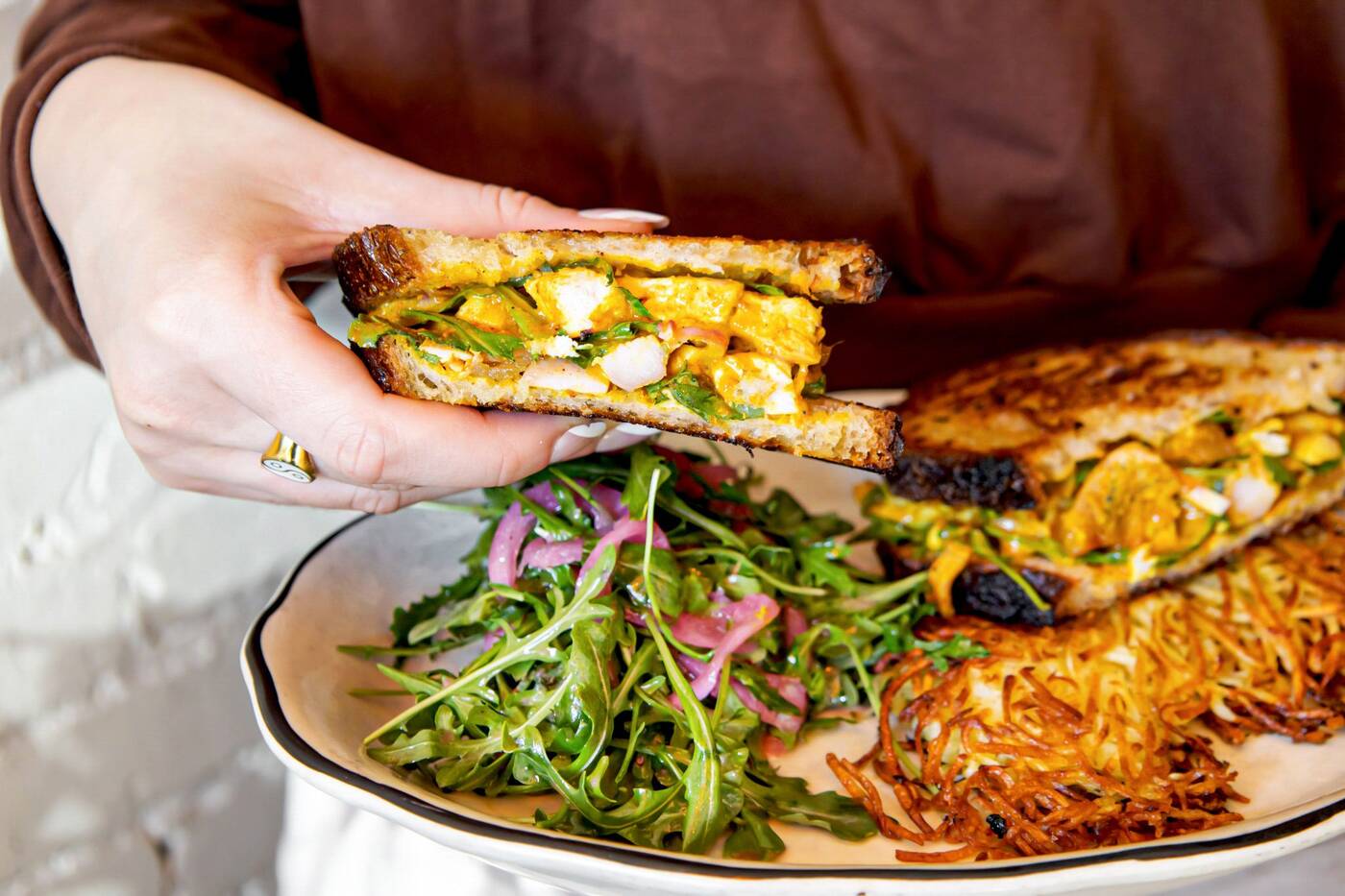 If you're looking for a more lunch-like option, order the Chicken Curry Sandwich ($15.00). The sourdough bread is toasted to a manageble crisp, hugging flavours from the mango chutney, pickled red onion, and aioli sauce.

You'll be stuffed after finishing the arugula salad and hashbrowns, classic sides served with dishes at the Federal. 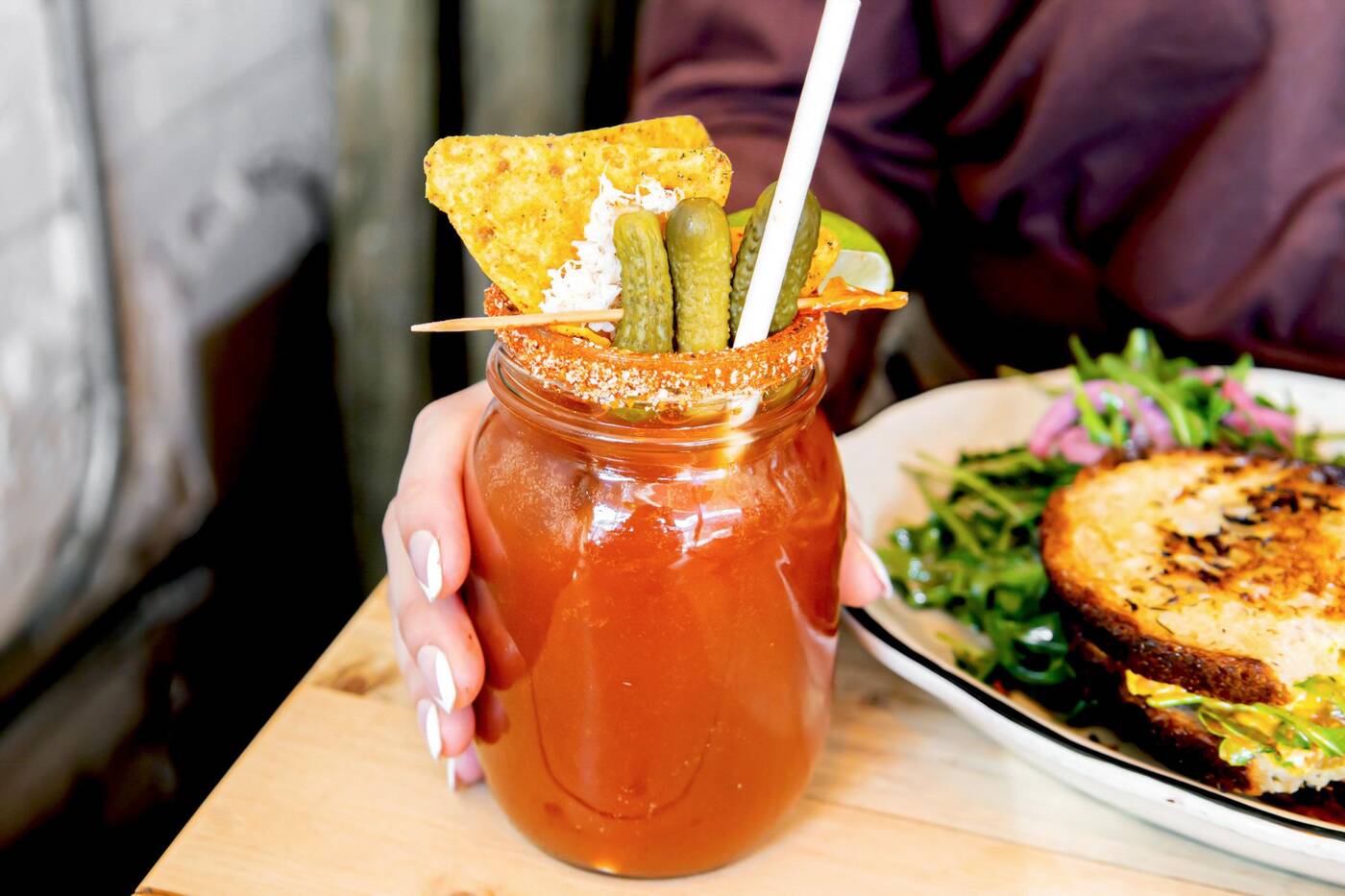 The Federal is known for their top-tier Caesars ($11.00). The drink has a good kick of spice from the Walter Caesar Mix used that gets paired with vodka. A classic recipe for a hungover cocktail or just something to enjoy with brunch.

The garnishes are fun on this one, three pickles sit on a skewer, along with lime and two Dorito Cool Ranch chips. 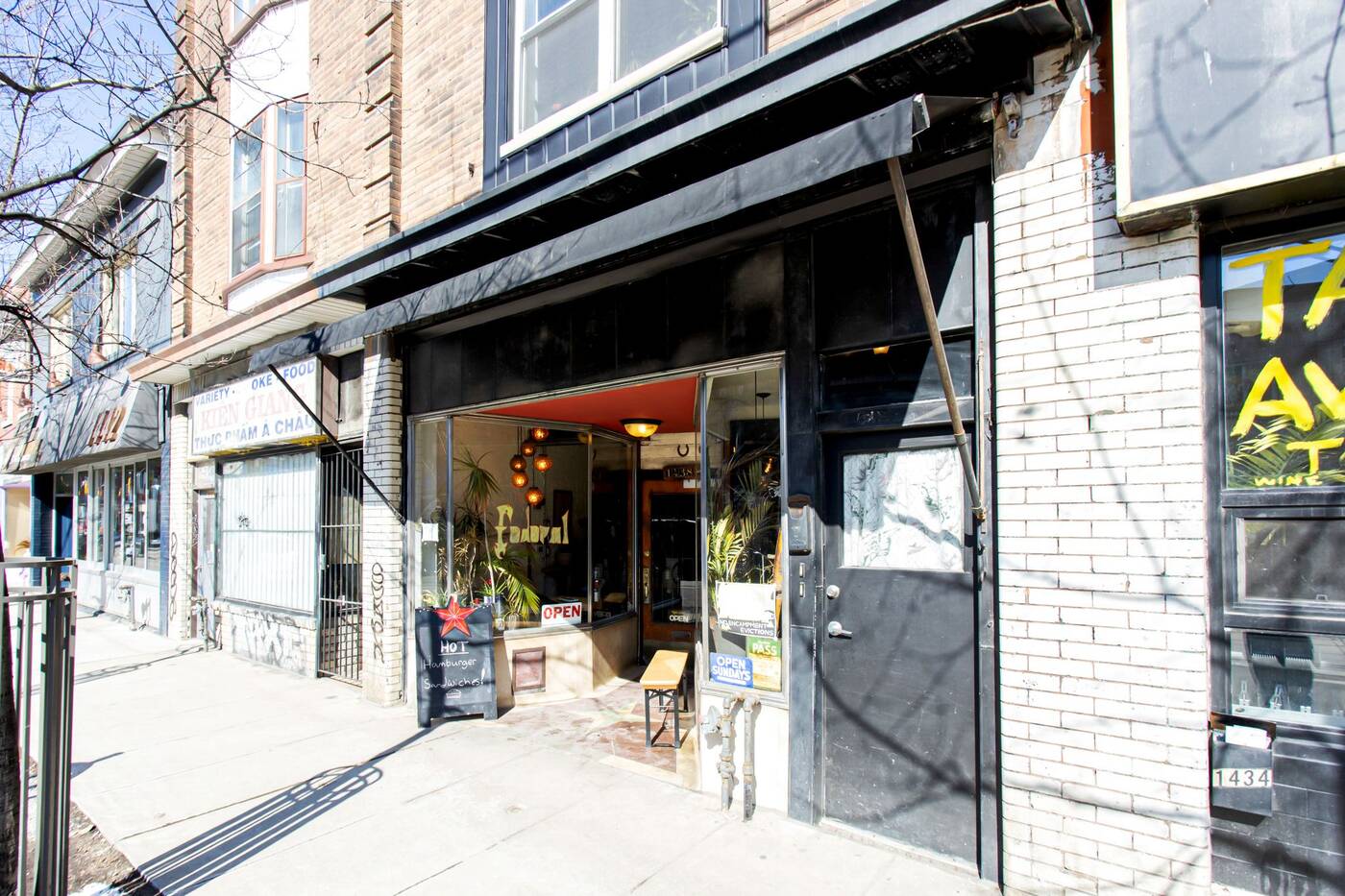 The Federal's storefront is tucked into its own little corner on Dundas West between Dufferin Street and Gladstone Avenue.