Electric Mud BBQ somehow managed to open without much fanfare last weekend in the space formerly occupied by Stampede Bison Grill — this despite the fact that the new venture comes courtesy of the pair behind what was arguably 2012's most hyped restaurant, the nearby Grand Electric . Conceptually speaking, this new offering doesn't depart much from its predecessor: while the tacos have been replaced with Southern-inspired barbecue and the hip hop has given way to classic rock, the ample bourbon, volume on the stereo, lack of reservations and the generally hip vibe (there's got to be a less dorky way to say that) make it easy to determine the shared lineage of the two establishments. 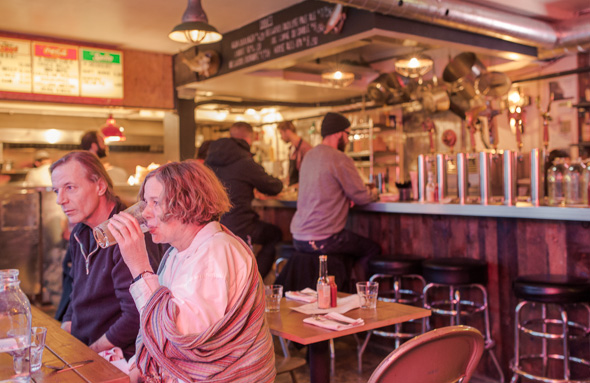 We arrived shortly after 5pm in the hopes of beating a possible line-up to find the restaurant half-full, a state that you're unlikely to see too often as word gets out about the place. By the time 6pm came around the room became loud and lively, filled with curious diners and plaid-clad servers darting between the 10 or so tables. Worthy of note, if you're not comfortable being seated inches away from your fellow patrons, be forewarned that the four-seat tables are rather cosy and that if you've arrived as a twosome, you're likely to make acquaintances with your table-mates (lighten up, Toronto — this isn't a bad thing). 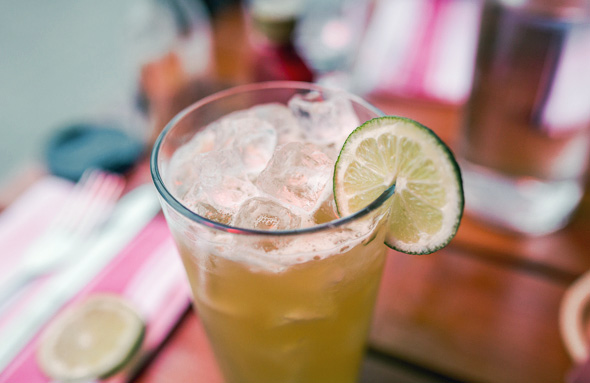 The cocktail list is on the short side with four offerings in total, and despite the extensive bourbon options, they won't just make you whatever you want (we tried and failed to get an Old Fashioned cooked up for us). This didn't prove to be an issue, however, as the Clydesdale (a mix of bourbon, lime, grapefruit and agave for $8) proved a well-suited companion for the smokey fare — perhaps that's why there were nine of them on the bill? Also popular based on a scan of the room is the Big Boi Rootbeer (also $8), which while less boozy, also pairs well with the food on offer. 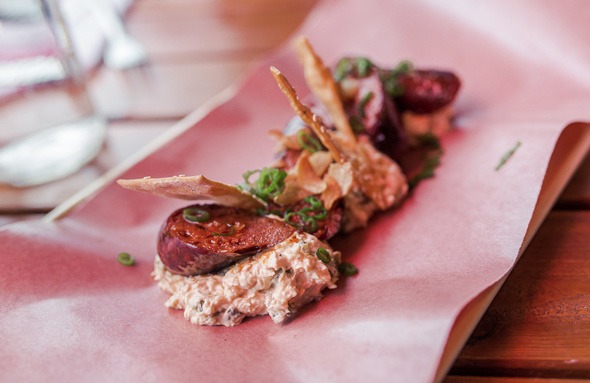 So how is that food? Pretty fucking good. While mulling the bourbon list, we split the Hot Links ($8.50), which are an explosively juicy take on Louisiana-style Andouille chock full of garlic and smoke. Served atop a spread that's at once like vegetable cream cheese and ranch dip, the accompaniment helps to pull back the overt smokiness of the sausage and adds another layer of fat-filled flavour to an already indulgent dish. 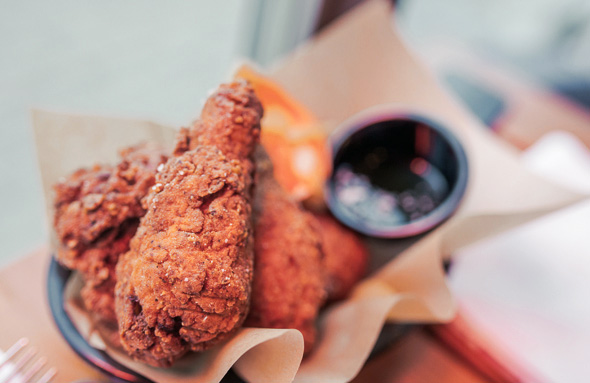 "Nothing here is altogether that good for you," a server later explains to a nearby table. But that's a matter of opinion. Sure, this isn't the most healthy food you can eat — but it sure makes you feel good, and that's worth something to me. Case in point: the Southern Fried Chicken (also $8.50) is out of this world. I've been impressed by similar offerings from the Stockyards and Riverside Public House in the past, but the folks at Electric Mud somehow manage to fashion an even crispier exterior than what you'll find elsewhere, and the blend of spices used put a certain Colonel to shame. 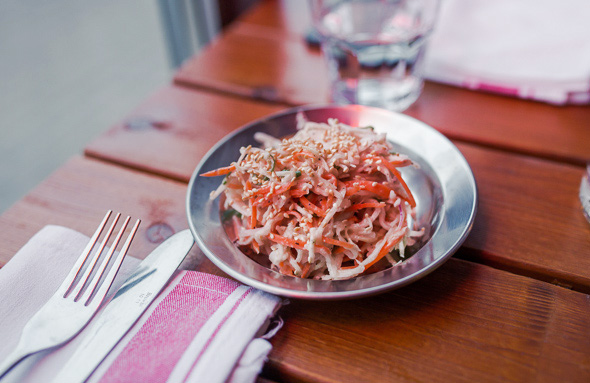 It'd be a shame not to order the Coleslaw ($3.50) alongside your chicken, as it's also one of the better slaws I've had. Sprinkled with sesame seeds, there's just a hint of Asian influence but what's most noticeable is how light it is. Although the sauce is clearly mayo-based, it's got enough underlying acid to cut some of the fat that's coming through from the chicken. Word to the wise, though, the portion is small — so if you're sharing it might make sense to get two of these.

Naturally we had to try the ribs (see lead photo). Regardless of how good all the other items on the menu are, if a barbecue joint doesn't do a bang up job on their ribs, the whole enterprise should be called into question. Nothing of the sort will be happening here. It's a shame we just updated our best ribs in Toronto post, because if we were to do it in a month, you can bet these would be on it. Sticky and tender (almost to fall-off-the-bone but not quite — i.e. perfect), they're not exactly traditional. Beyond the fact that they're topped with peanuts and chives, you'd have difficulty placing the sauce within any American barbecue style or tradition. They're both sweet and acidic, but not to the same degree that you'll find with most Southern preparations. 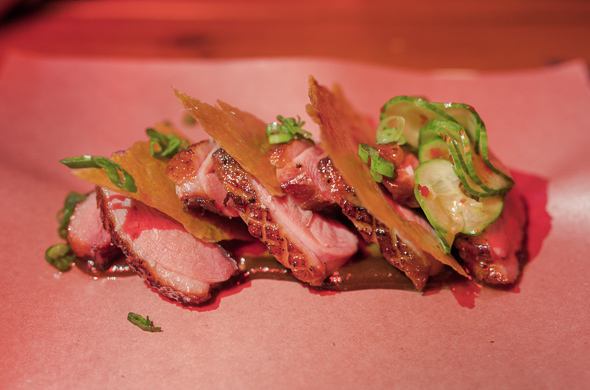 If there's a criticism to be made here, it's on the portion size to price ratio. At $13.50, I'd like more than three ribs, especially given that this is the type of food that's meant to share. That said, I found the prices for the other dishes we tried more than fair. Take the Duck Ham ($13.50), for instance. The generous portion of wonderfully smokey duck would surely fool more than a few people in a blind taste test. I mean it really, really tastes like a traditional pork-based ham. The texture is a give-away, though. This meat is juicier than your standard offering and the skin bursts with salty flavour. I should also add that the pickled accompaniments (which also come with the fried chicken) are a nice little touch and, once again, offer a useful bit of acidity when you need it. 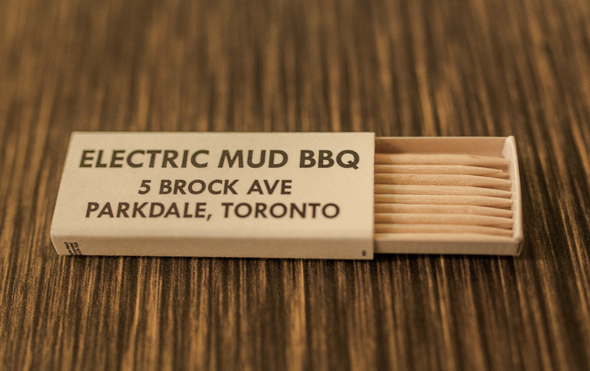 We skipped dessert in favour of more bourbon, sampling offerings from Baker's and Elijah Craig — neither of which broke the bank at $8 and $6.50 respectively. It'd be easy to get in trouble here, though. The list has well over 30 bottles, much of which you'll have difficulty finding at the LCBO (what a surprise).

Given that this review comes mere days after the place has opened, there's not much point getting into the service. There were a few minor hiccups, but the staff were friendly, worked well as a team, and made us feel welcome and at home. That's all that really matters. This is a fun, casual place to eat, so please no complaints about the loud music. And if the name doesn't sound altogether that appealing, do bear in mind that it's a reference to a Muddy Waters album . 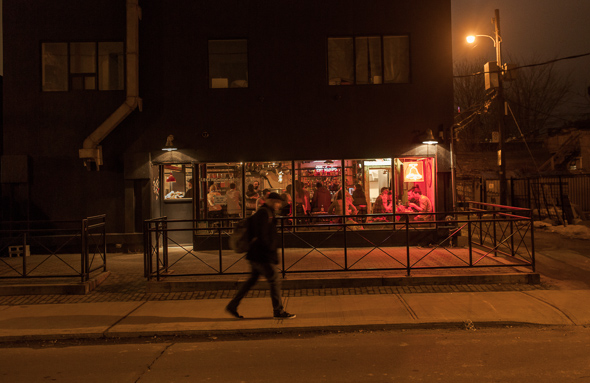