Duggan's Brewery Parkdale isn't owner Mike Duggan's first trip to the rodeo. Having been involved with brewing beer in some form or another since he was in his twenties, Duggan co-founded a little brewery you may have heard of called Mill Street . After he walked away in 2007, he continued to consult on recipe creation for a handful of Ontario breweries before he decided to open his own brewpub, the eponymous Duggan's , in 2010.

That location, at 75 Victoria St. , ultimately closed down, and although he's been contract brewing his Number 9 IPA for sale in the LCBO and has co-founded the Ontario Beer Company , the interim has been fairly quiet for Mike Duggan. "I took a little time off," he tells me over beers at the grand opening of his reinvented and aptly named new brewpub. And over the course of the evening, it becomes clear he's looking to come back in a big way. 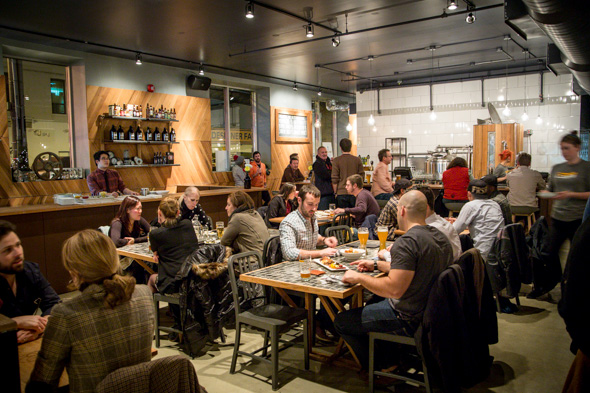 The new space at 1346 Queen Street West was previously home to the Japanese restaurant Kanji , and though Duggan's Brewery Parkdale has been serving up beer there for a few weeks, until now the business was technically still operating as a "pop up," with sporadic hours and a rotating lineup of food trucks parked along Brock Avenue. 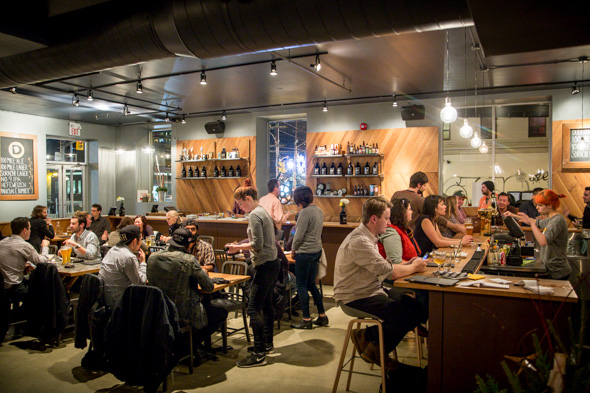 Besides an actual functioning kitchen, not much appears to have changed for the grand opening. The decor is still rather spartan, with a smattering of unstained wood tables available, a bar-height slab of wood furnished with metal stools dividing the middle of the dining room, and a no-nonsense bar servicing the space with a line of draught taps and also, as it happens, a functioning lauter tun behind it.

One thing that has changed is the addition of a retail space that dominates one side of the room and offers up growlers and tall cans of a handful of Duggan's beers for take home, including his flagship IPA and Number 5 Sorachi Lager, his Hefeweizen, a strong lager called Parkdale Bomber and the 100 Mile Ale and 100 Mile Lager from Ontario Beer Co. 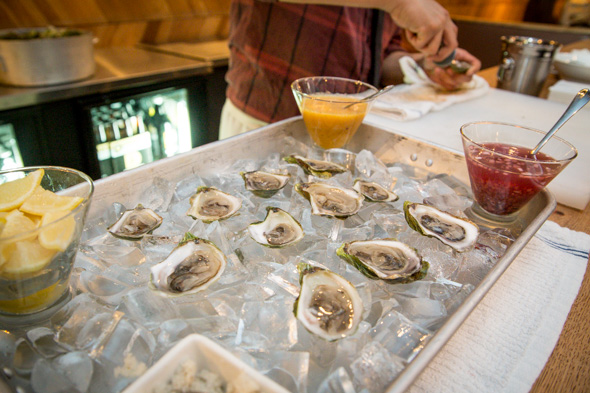 The kitchen is being helmed by Rene Chauvin, who has been a friend of Duggan's for over 20 years and who actually served as the executive chef of the original Duggan's. In addition to helping open the kitchens at Pure Spirits Oyster Bar , The Boiler House , and 1832 Pasta Bar, Chauvin is also currently a teacher at George Brown College and Duggan says it's likely that students will cycle through his brewpub for hands on training - something that he and Chauvin did at 75 Victoria Street. 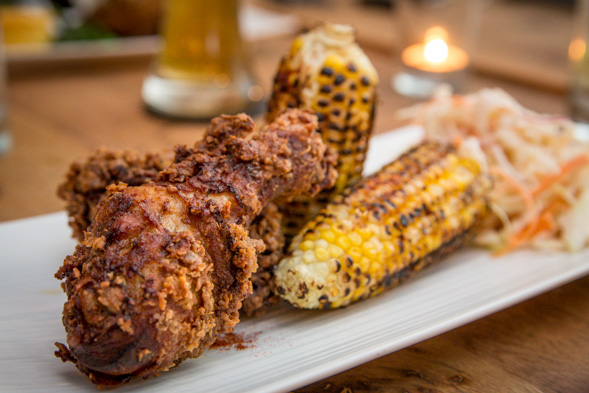 As for the menu's focus, it's a fairly eclectic mix, but attention seems to have been rightly paid to not-too-fancy fare that will complement a few beers. The jerk fried chicken platter ($14) that my guest and I order is nothing short of the ideal accompaniment to a fresh pint. The chicken is ridiculously juicy and the breading is thick, crunchy and spicy. This approaches perfect fried chicken. 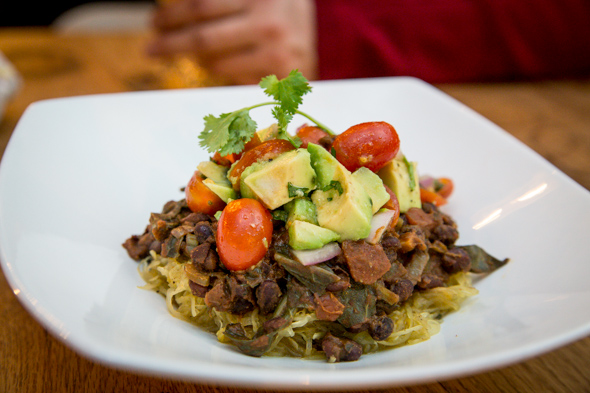 The vegan-friendly spaghetti squash ($12) is also very good and while squash served with black beans and an avocado salsa sounds like a bit of a hodge-podge for a pub, the execution, offered with a healthy dose of curry, really works well. 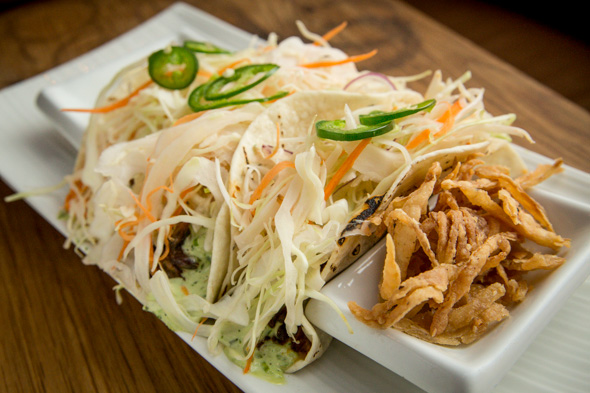 Because it's probably municipal bylaw that a restaurant in Parkdale must serve tacos, they're here too. Listed on the menu as "Daily Tacos" ($12) for the grand opening Duggan's was offering up beef brisket tacos, chicken tacos, and black bean tacos. We opt for an assortment of all three and each, served on a grilled tortilla, has its merits--though the execution is perhaps somewhat sloppy with an excess of shredded cabbage. But hey, they're tacos.

There's a reason they seem ubiquitous as of late: they generally taste pretty good. The highlight of the tacos is probably the brisket, with meat so tender you wish there was a plate of it. Thankfully, that's actually a menu option too and we order a plate of Peppered Braised Brisket ($15). It's just a plate of ridiculously tender, soft beef, accompanied with a decent piece of corn bread and a healthy helping of chimichurri. The latter, unfortunately, seemed mostly composed of pureed cilantro and doesn't seem really necessary. 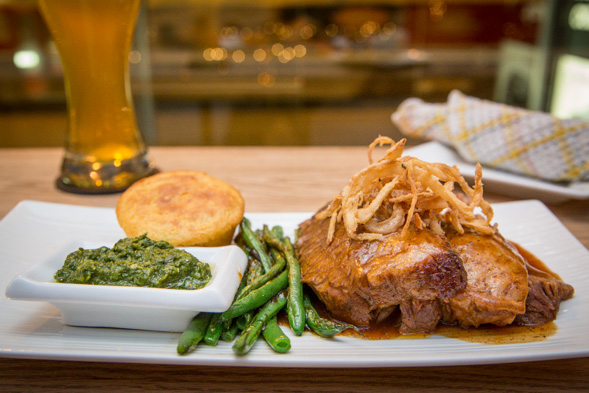 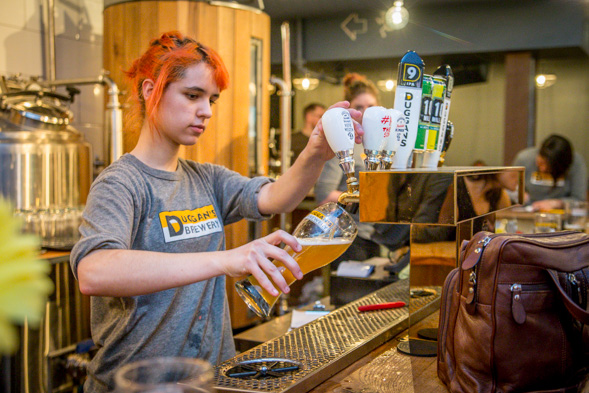 The other part of the menu, as you might expect, is devoted to beer. Duggan's offers his 100 Mile Ale, 100 Mile Lager, Sorachi Lager, Hefeweizen, IPA, and Parkdale Bomber on tap - all for $6 or $7 each. As you'd expect from a brewer with Duggan's experience, they're generally all excellent examples of their respective styles - though Number 9, a beer that arguably helped kickstart Ontario's IPA obsession, seems ironically tame in its vaguely British, malty execution given the plethora of local hop bombs it helped usher in.

While he had just brewed his first beer onsite the day before I visited, everything will eventually be brewed in the basement. Housing 15 fermenters that each hold 500 litres, Duggan tells me the brewery's total capacity will be 1000 hectolitres. The focus will be on smaller, experimental offerings, and while the intent is obviously to brew beer for the draught taps and retail store upstairs, he'll also be selling to other restaurants and bars and some specialty brews might even end up at the LCBO. 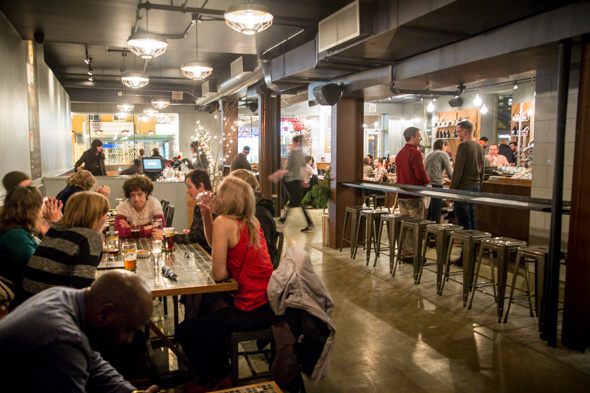 While it might seem like a lot to take on at once, Duggan makes it clear this brewpub is just the beginning. "We're in the process of buying a farm over the next few years to build a big brewery to do our large scale production," he says. He not only hopes to use that land to grow ingredients for his beer, but "a lot of the food we'll use at the restaurants."

And yes, he said restaurants, plural. "This is just Duggan's Brewery Parkdale," he says, suggesting there might even be international locations in the works, including in Berlin and Cuba.

Clearly, after some "time off" Duggan feels like he's got some catching up to do. Craft beer fans will have to wait and see how the planned Duggan's empire ultimately pans out but, for now, we've at least got one other decent option for places to enjoy a meal and a beer made under the same roof - and that's almost never a bad thing. 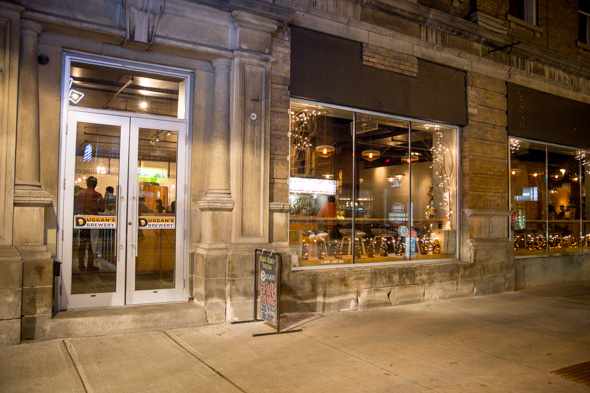 Ben Johnson also writes about beer over on Ben's Beer Blog . You can follow him on Twitter @Ben_T_Johnson .