Drake BBQ is the latest incarnation of the pop-up space next to the Drake General Store that was formerly running as Scoops & Tees . It's been transformed into something a little more season-appropriate: a southern-style barbecue sandwich shop. Open only Thursday through Saturday from 6pm "'til the meat runs out," and with very limited seating, this is more of a takeout spot or a place to grab a quick bite. Curious to see how the Drake's slow-smoked meat stacks up against the plethora of barbecue joints Toronto has to offer as the city's love affair with the grill seems only to grow, my friends and I head over to sample some sandwiches. 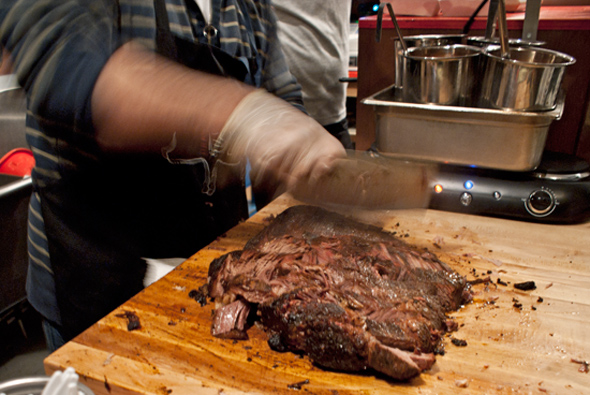 Shortly after 6pm, as we enter the small space decorated in a theme that should really be described as hipster barnyard, we're immediately attracted to the food prep area where the unmistakable smell of barbecue seems to be originating. The cook greets us as he drops a giant slab of charred beef brisket onto the cutting board, ready to be chopped and turned into one of the southern-style sandwiches, the only items on the menu. 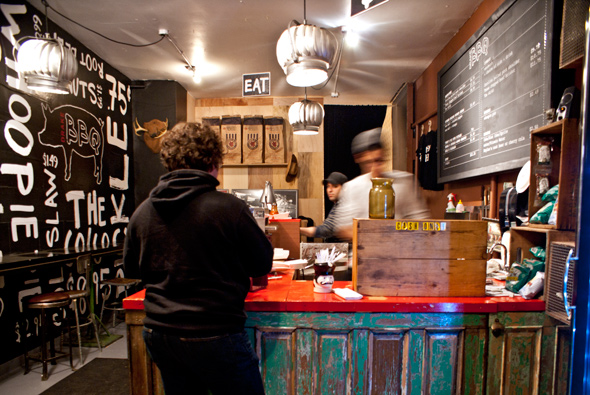 All sandwich options are available as combos, offering the sandwich and side of choice, as well as either a typical soda or a Boylan's rootbeer or cherry cola. My friends and I opt to order one of each combo, and head over to the stools lining the window bar to wait for our meaty meal to begin. 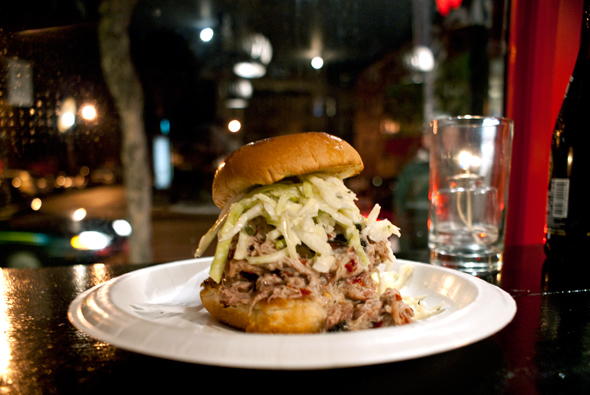 My personal choice is the Carolina pulled pork combo ($9.75), and I order the coleslaw as my side. Not wanting to have to share, I also order my own pickle ($.75). The sandwich itself is an extremely high, teetering pile of pulled pork on a no-nonsense white bun, smothered with a tangy vinegar sauce and topped with a scoop of the same coleslaw I have on the side.

The meat is almost ridiculously moist, and between all that liquid and the accompanying sauce, the bottom half of the bun is all but obliterated. It would be difficult, however, to find a bun that could stand up to this kind of abuse, and really, the meat is what matters. Only the most adept at devouring messy barbecue would be able to actually pick this sandwich up and take a bite rather than use a fork, and I make it through a couple of bites before I succumb to using utensils.

The sauce on the juicy pulled pork is a simple mix of apple cider vinegar, sugar and chilis, and it offers an unmistakable punch as I take the first bite. As a vinegar lover (seriously - I could drink the stuff), even I find it a little overpowering at first, but it may have just been the first couple bites, because as the sauce sinks in, it adds just the right amount of tang. 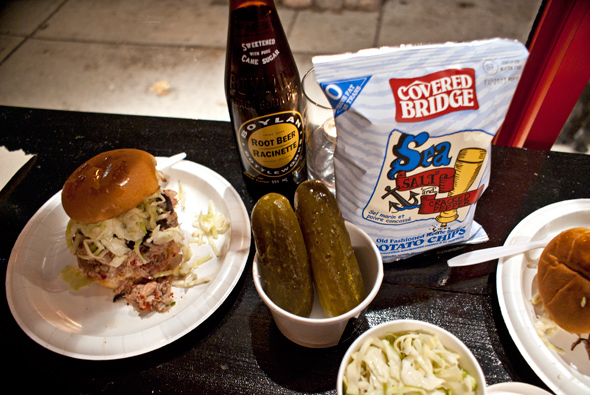 The coleslaw is straightforward: rough chopped cabbage, creamy with a hint of oniony sweetness. Nothing revolutionary, but it does the job. The kosher pickle, however - Tymek's old sour pickle, to be exact - is the perfect accompaniment. Crunchy, juicy, and full of flavour, I finish it off immediately and quickly get up to order another one. 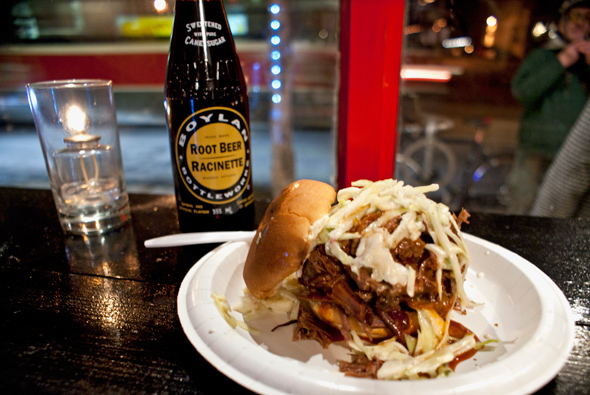 One of my dining companions selects the Texas chopped beef brisket combo ($10.75), which is also a giant serving of messy comfort food. The beef is very tender and juicy, with a distinct smokiness that can only be achieved from a long, slow visit to the smoker, and topped with homemade barbecue sauce that the cook ladles on generously right before handing over the sandwich. All the sandwiches come topped with a heap of coleslaw, and it's a simple equation, but this kind of sandwich should let the meat take the spotlight and doesn't require much else. 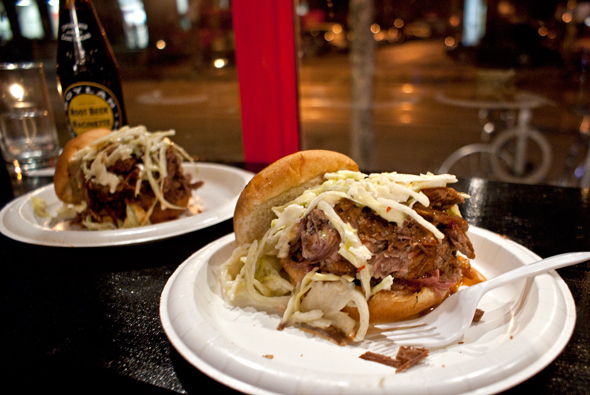 The 60/60 ($11.75 for a combo), the most gluttonous choice of all, really doesn't need much explanation. Loads of beef brisket, loads of pork. Very tasty, but it would take a commitment to consume this entire thing. My friend selects sea salt and cracked pepper chips to go with her sandwich, a bag of New Brunswick's Covered Bridge old fashioned kettle chips.

Our server, who seems set not only on taking our order, but also providing us with entertainment during our meal, inquires from behind the counter, shortly after we begin eating, if we like spice. The resounding 'yes' results in him coming over with a jar of house-made, mango and pineapple infused hot sauce that only makes the meal better.

The hot sauce is spicy at first bite, but creeps to an even higher level of heat after a few moments on the tongue. When we share our reaction with our server, he flashes a tiny vile of something from the other side of the counter like he has a really good secret. He reveals a two-ounce jar of very expensive hot sauce, 1.5 million scoville units, he explains. "We don't give this to people, but once someone complained that our own hot sauce just wasn't spicy enough, so the chef let him try it." More entertaining stories ensue. 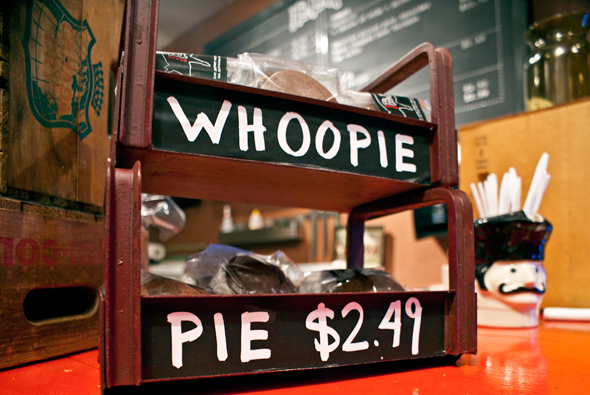 We finish our meal with a giant homemade chocolate whoopie pie ($2.49), the only dessert on offer. Whoopies abound these days, and you can always trust the Drake to be on top of the latest trend, even when it comes to baked goods. This is most likely the largest whoopie I have seen so far, but unfortunately nowhere near the best. The chocolate cake is just too dry, and the marshmallow filling has a strange artificial flavour that is not so enjoyable. 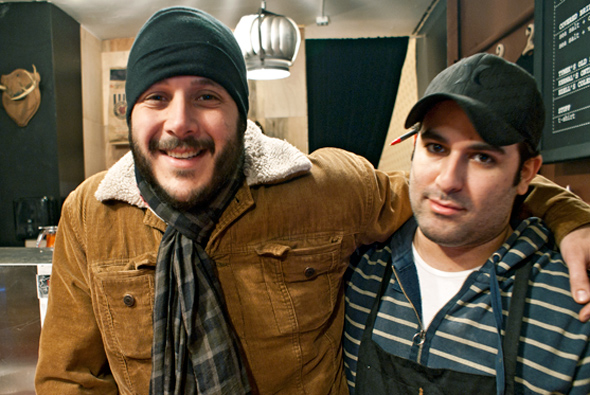 As we finish up our meal, chef Anthony Rose, the man behind the barbecue, makes an appearance and greets us with an amiable hello. The casual atmosphere of a little place like this that just doesn't take itself as seriously as a full-out restaurant is appreciated on our side, and we enjoy the entertainment. For a messy, comforting sandwich with some good old barbecue, Drake BBQ seems to have it down. The uncomplicated sides and simple preparation of the sandwiches communicate what the cooks, and now us customers, know. Drake BBQ is all about the meat. 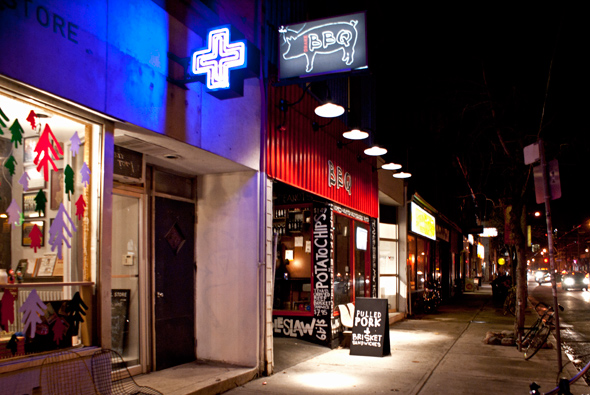