Dr. Augusta's Samitorium opened on the southern fringes of Kensington Market a little over a week ago, and their particular brand of sandwiches has already developed regulars in the neighborhood. The shop is manned by Chris Bobbitt and Vlad Vujovic, who met many years ago at Canoe . In the trenches of fine dining, they'd joke about becoming legitimate sammie-slingers. 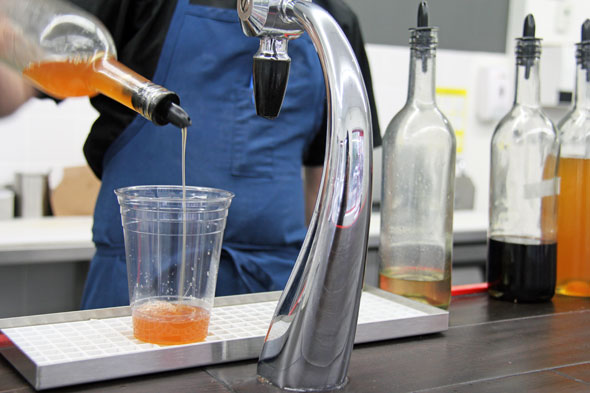 The vision was "old-school soda shop meets sandwich shop," Bobbitt tells me, and the result does a good job of approximating this--by way of Twin Peaks . Think tall black-leather-and-metal stools, a sprawl of black-and-white checkered floor, a large black counter, and bold red trimming throughout. There's also the occasional bonsai, and a neat row of pickles doing their thing in mason jars. 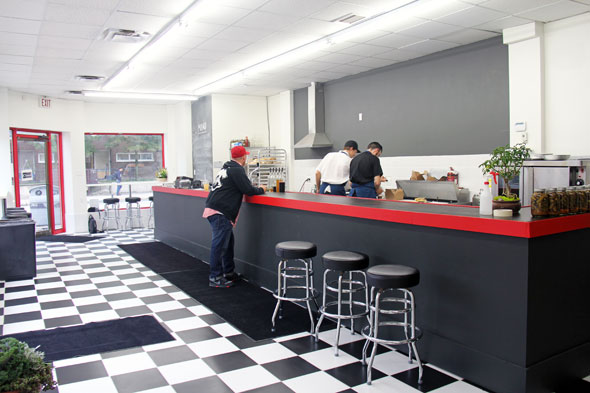 The space is considerable, but only has 9 seats (thanks, ye pesky city codes), lending itself to take-out more than eat-in. Bobbitt is quick to sing the praises of his purveyors: Blackbird Baking Co. , whose chief baker Simon Blackwell operates out of Soma and provides an array of breads ranging from rye sourdough to ciabatta rolls, and Sanagan's Meat Locker . 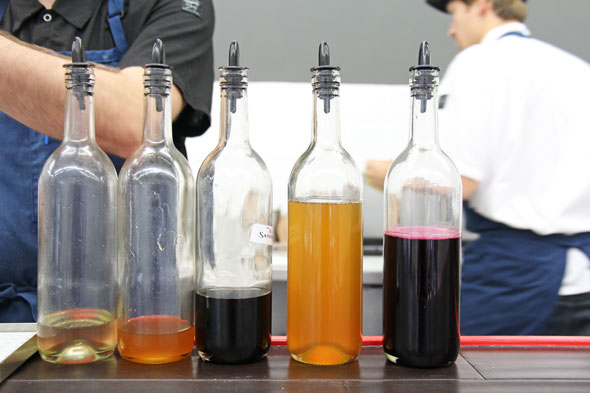 Bobbitt takes credit for the "crazy" idea of homemade sodas. I try the ginger beer soda ($2.75, or $5.75 as a float), and it's a straightforward mix of ginger, sugar, and a hint of cayenne for bite; it doubles nicely as a tantalizing sinus decongestant. Bobbitt hints that the current roster of flavours--stand-bys like cream soda, grape soda (made with seasonal Concord grapes) and root beer--is just the beginning, and cites his use of classic 100-year-old recipes. 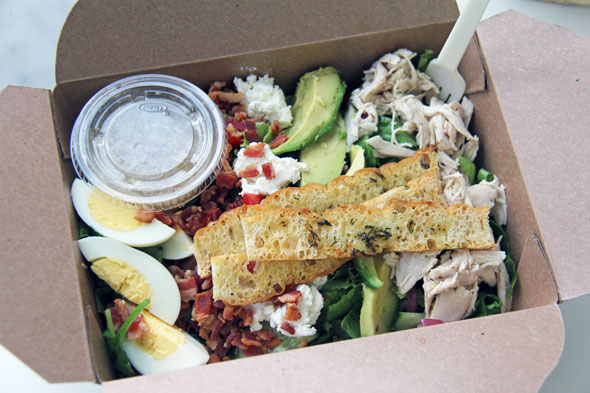 First is the cobb salad ($9.75), which sees romaine hearts, poached chicken, goat cheese, thick chunks of avocado, fresh tomatoes, bacon and pickled veggies stuffed in a cardboard box--just about the kitchen sink. The champagne dressing provides a touch of lively zest, but it's a remarkably well-balanced dish. Praise goes to the chicken and goat cheese, neither of which are exceedingly salty, and rather blend in for textural surprises. 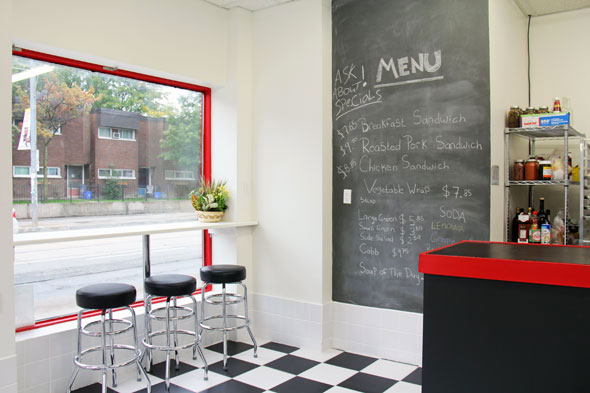 I'm going to spare you the suspense: they make damn good sandwiches. The roasted pork ($9) is loosely comparable in taste to a banh mi. A (maybe-too-small) ciabatta roll holds roasted pork shoulder brushed with grainy mustard, and topped with kale slaw, a simple pan jus, and crisped leeks.

The bread's freshness and quality is evident even from the smell, and the kale slaw (also available as a side for $3.50) provides a burst of freshness to offset the sandwich's only failing: the pork shoulder is too fatty. I understand it's the nature of the cut, and provides the mixed blessing of keeping the meat moist, but there's something tragic about a fifth of it ending up inedible on the plate. 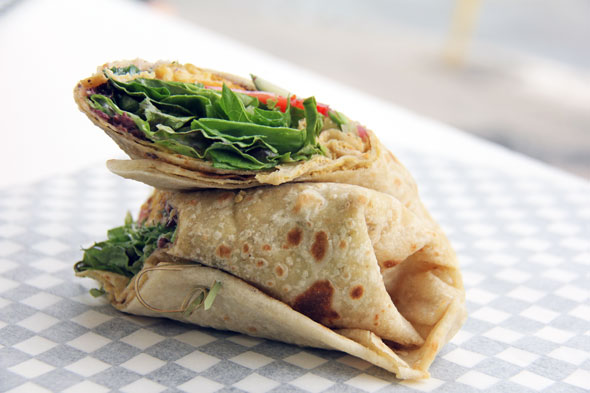 It's the second sandwich that hooks both my boyfriend and I; a vegetable wrap ($7.85) that takes its cues from Indian, French, and loosely, Middle Eastern cuisine. Inside a fresh roti, you'll find salad greens, house-pickled veggies, olive tapenade, and Bobbitt's European take on a falafel--panisse, a chickpea fritter with a texture that more closely resembles polenta.

Those flavours alone come together beautifully, but what elevates the wrap is Bobbitt's herb yogurt dressing (I murmur "I taste mint" a half-dozen times between bites), which brings us back around to Indian cuisine's raita sauce. For a vegetarian dish, it's lush, filling, and leaves us both staring sadly at the empty wrapper. 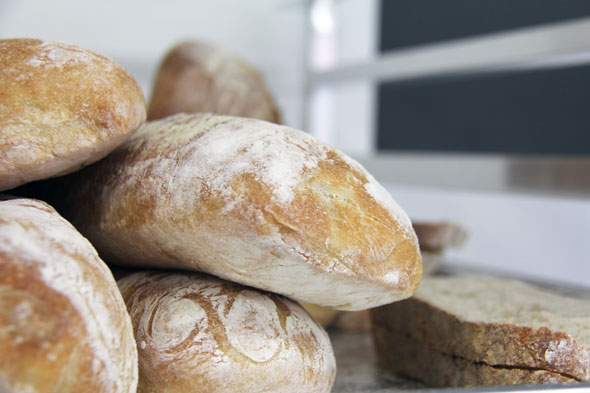 Their ambitions are high: a lobster roll enjoyed short-lived residency on the menu before becoming cost-prohibitive, and a shrimp po' boy on pain au lait, and braised oxtail sandwich are in the works. I'd like to see them tackle baked goods, as one of their big hits has been a homemade buttermilk biscuit ($7.65) topped with braised pork belly and a fried egg. 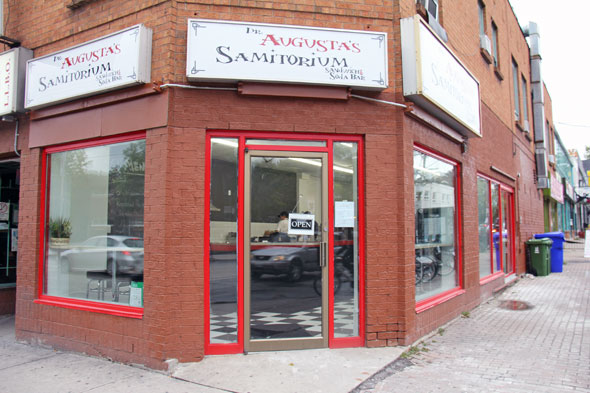 The price is, for an average sandwich, a bit high, but average these ain't. You can taste a chef's sensibilities and careful consideration of flavor profiles in every bite, and they don't buy in bulk; everything is made fresh daily. Moving forward, Bobbiit says that they're looking for some decor (the walls are Spartan at the moment), a jukebox, and a milkshake stand. I say, bring on the po' boy.