The duo are best known for their previous restaurant, Dandylion, which closed during lockdowns when the lease to their West Queen West space was up.

Named after Beckett's mother Dotty, the restaurant takes over David Adjey's La Nectarine and has a vibe and cuisine that straddles a cool neighbourhood diner and a casual wine bar. 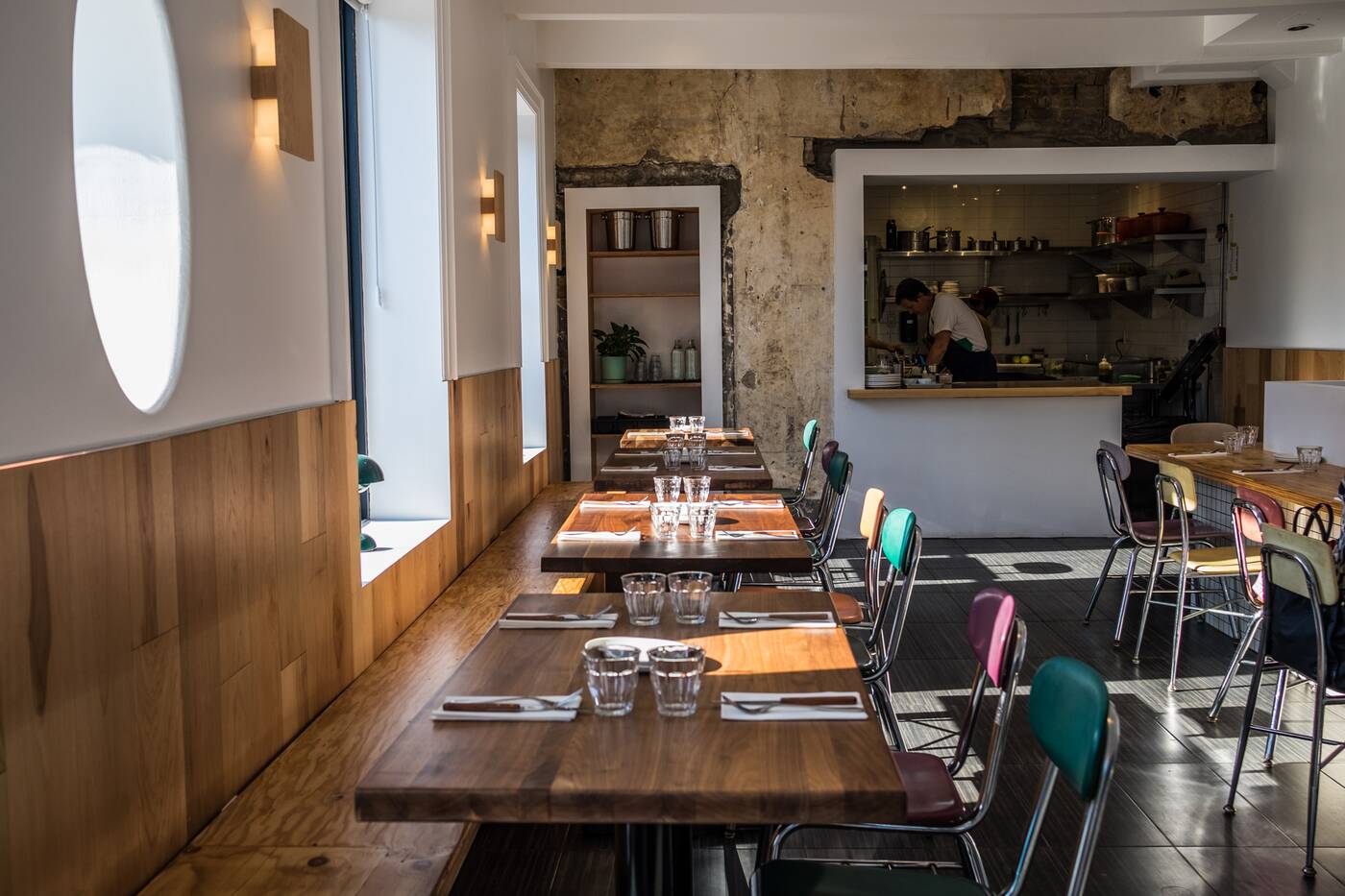 Operating between Tuesday to Saturday, Dotty's long and minimalist room is lined with wooden banquettes that seat 30 inside, with another 40 on the Franklin Avenue-flanking patio. The bright and open space is filled with custom and DIY woodwork, plus sourced vintage furnishings.

Look to the exposed-concrete wall at the rear of the room to find the kitchen team – David Chang, Max Marangone, and Adam Bryant (tapped to take on the chef role at Carter and Beckett's upcoming bistro nearby) – at work in the open kitchen. 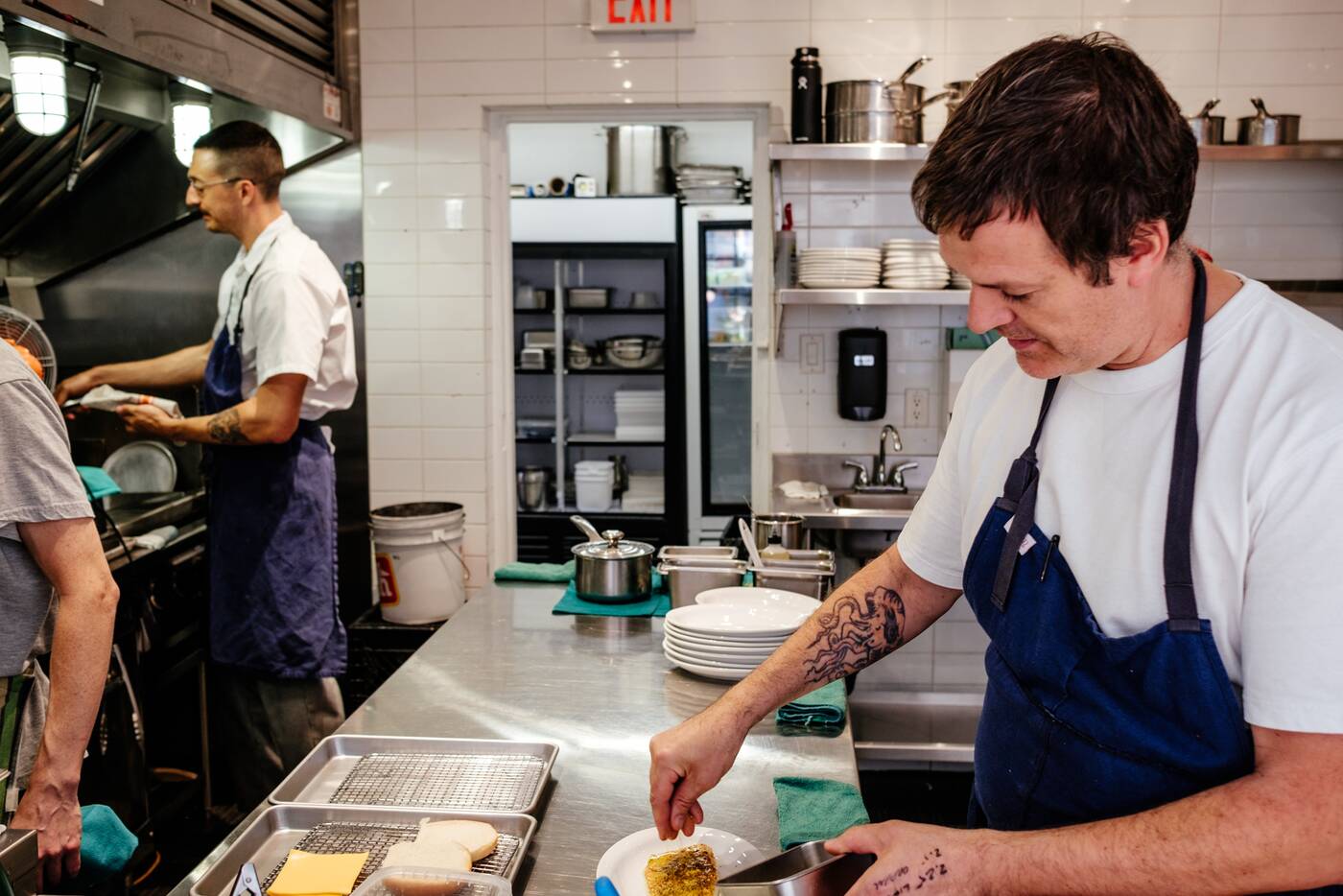 While Carter considers the food casual, it's hard to miss the finesse in each dish's execution. Despite being caught with a bincho grill (a piece of equipment used either in serious yakitori bars or restaurants) in the kitchen, Carter insists the food is not chefy.

"It's charcoal," Carter retorts. "But there is some binchotan in there. I've still got to do stuff right." 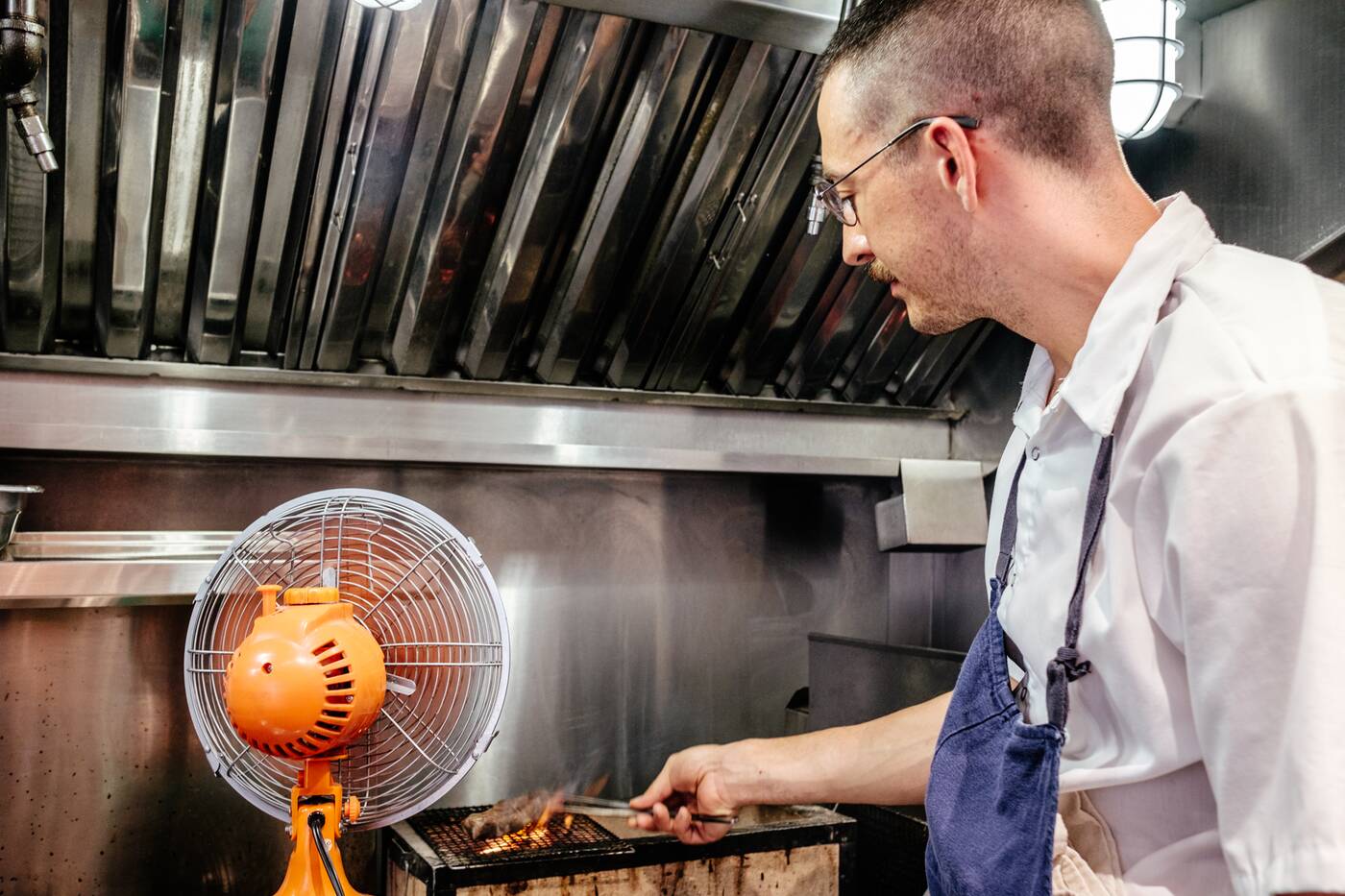 This attention to detail is well known by Carter's fans and is now applied to a menu of flavourful, unfussy dishes that are not your average bar food. 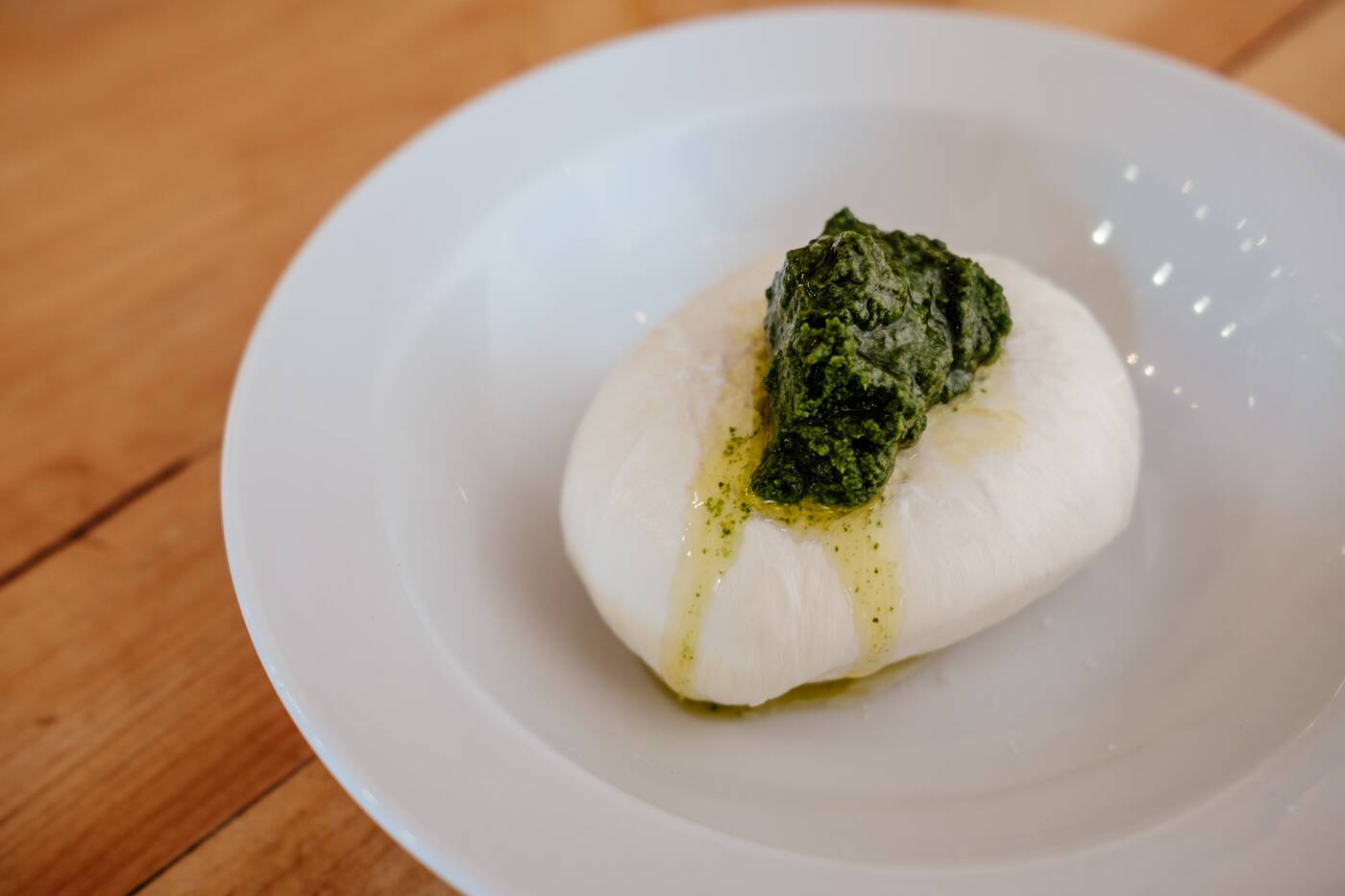 Quality ingredients found in dishes like Burrata and Pesto ($18) are great on their own but can also support seasonally featured items like tomatoes. 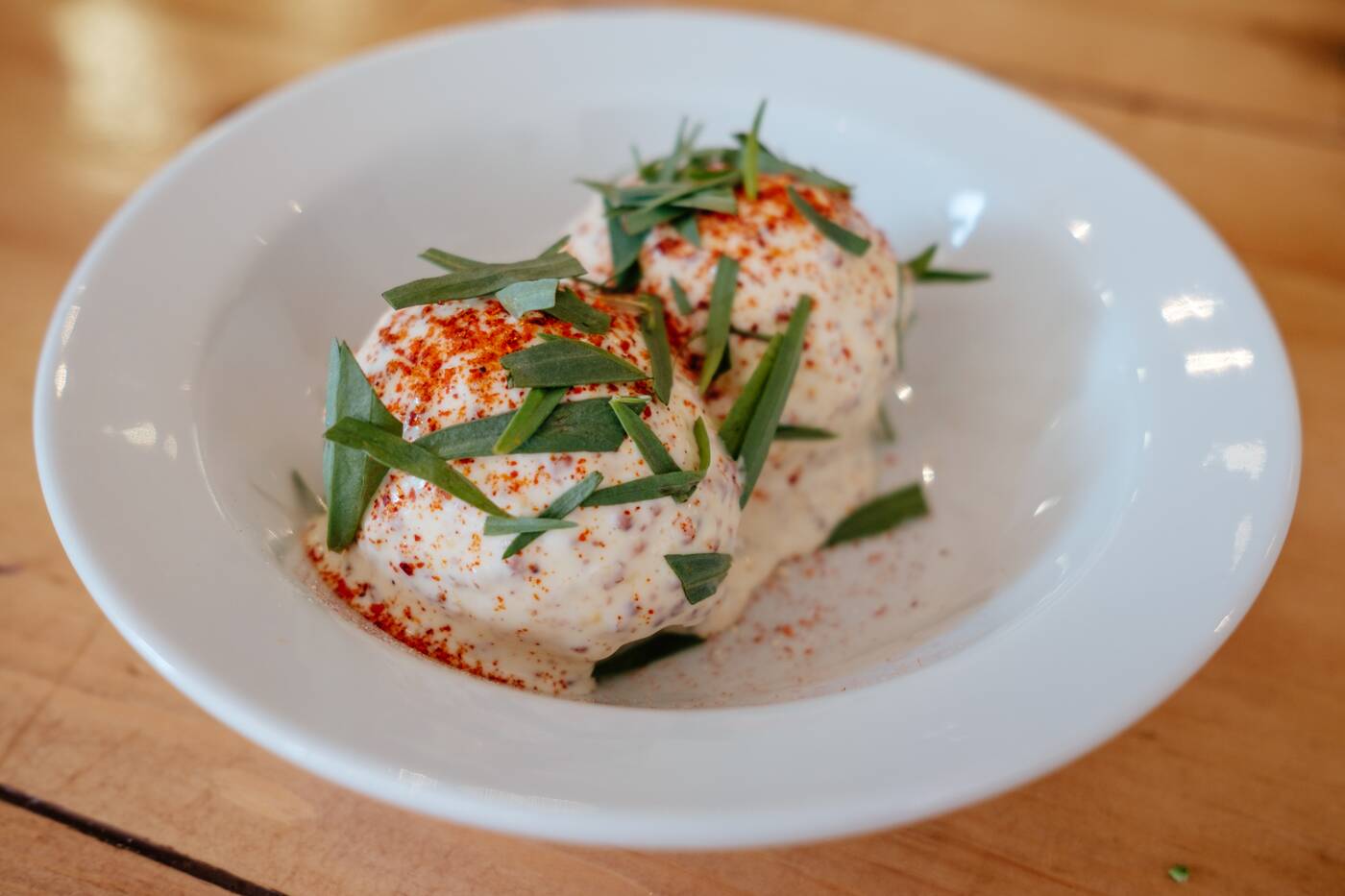 There are small bites like the French bistro classic, Oeufs Mayonnaise ($6). 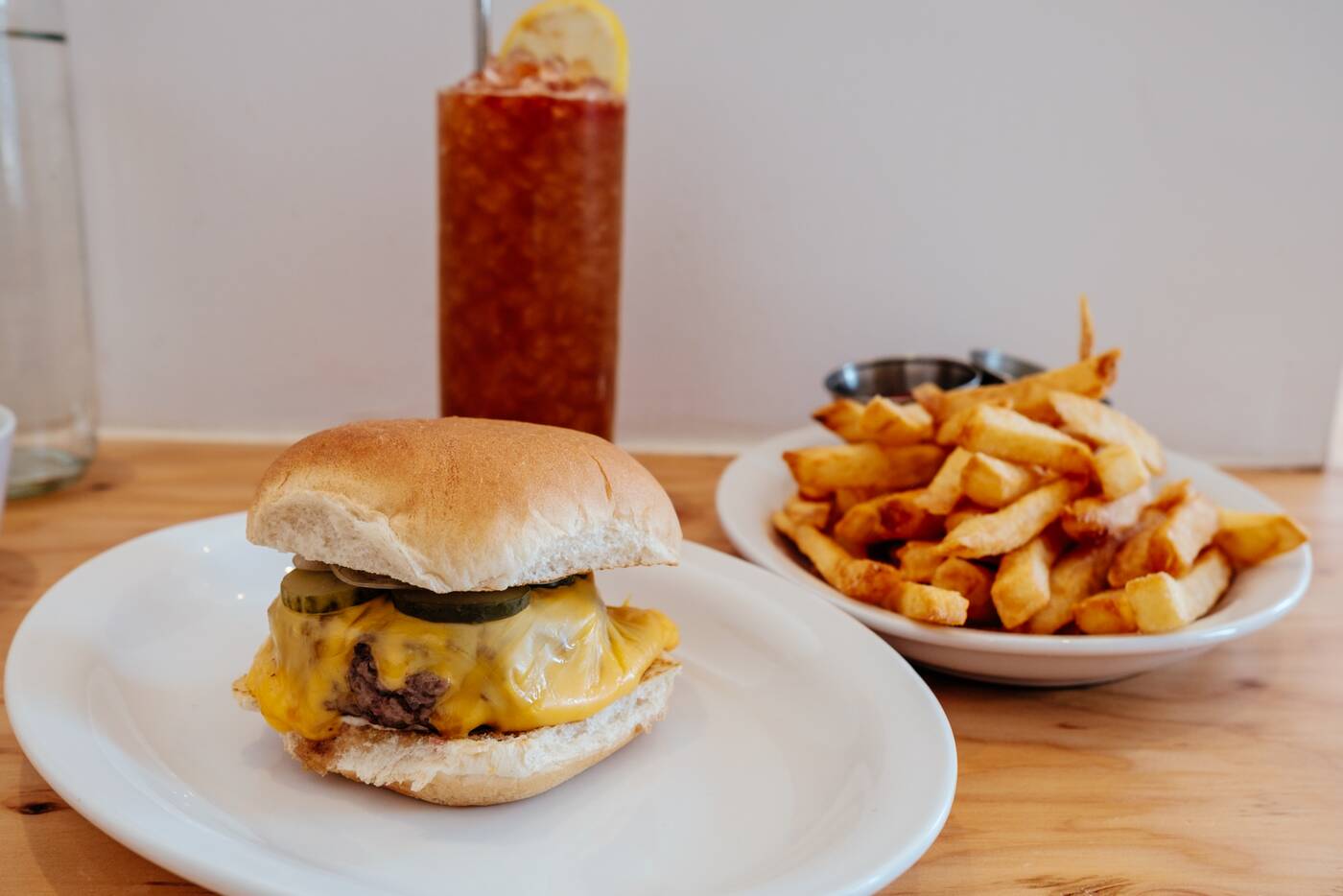 The Cheese Burger ($16), for example, is made from a blend of beef brisket and chuck that's juicy and tender. The medium-rare patty is topped with not one, but a slice each of cheddar and American cheese, then lightly dressed with mayonnaise, ketchup, mustard, and sliced pickles. 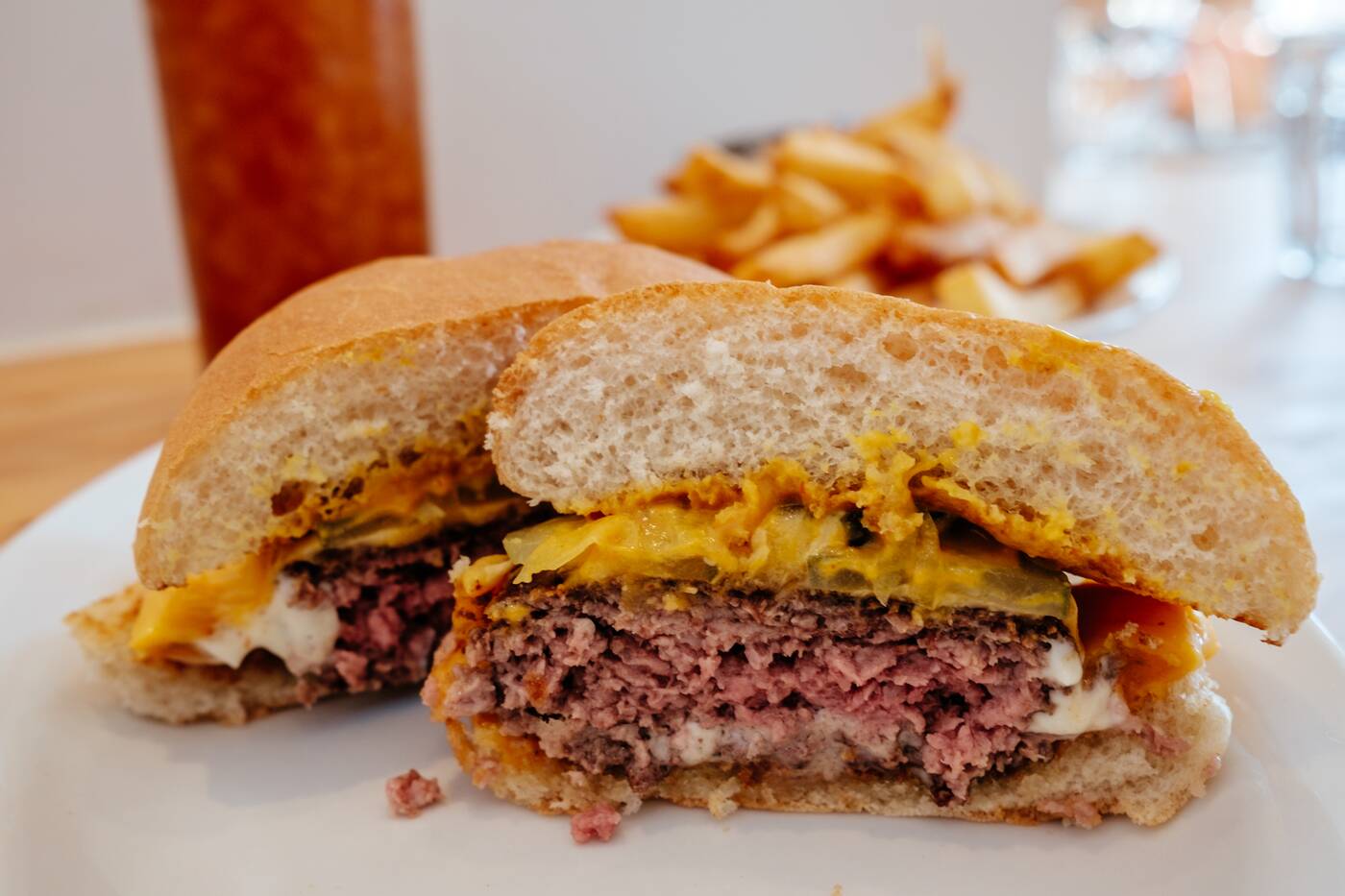 While the bun isn't homemade, it is lightly toasted on the cut side before everything is sandwiched together. The final combination is balanced and satisfying.

There's Fries ($8) made from hand-cut russet potatoes that are meaty and tender but sport a crisp golden crust. 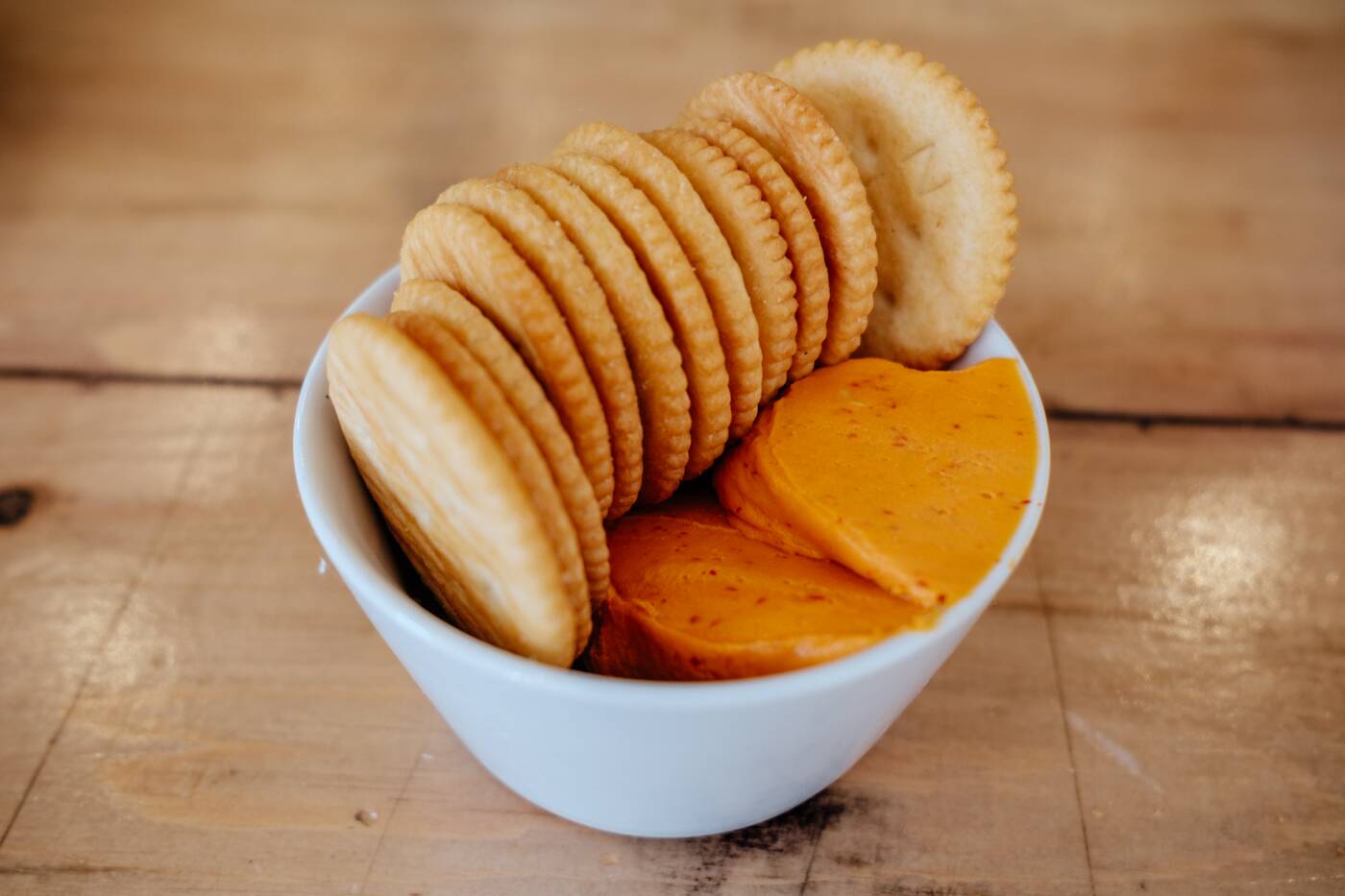 For fun and tasty bites, the Cheese & Crackers ($8) is a popular order that features pimento cheese that the kitchen makes using American cheese, sour cream and pimento paste. It's simply served with a stack of Ritz crackers. 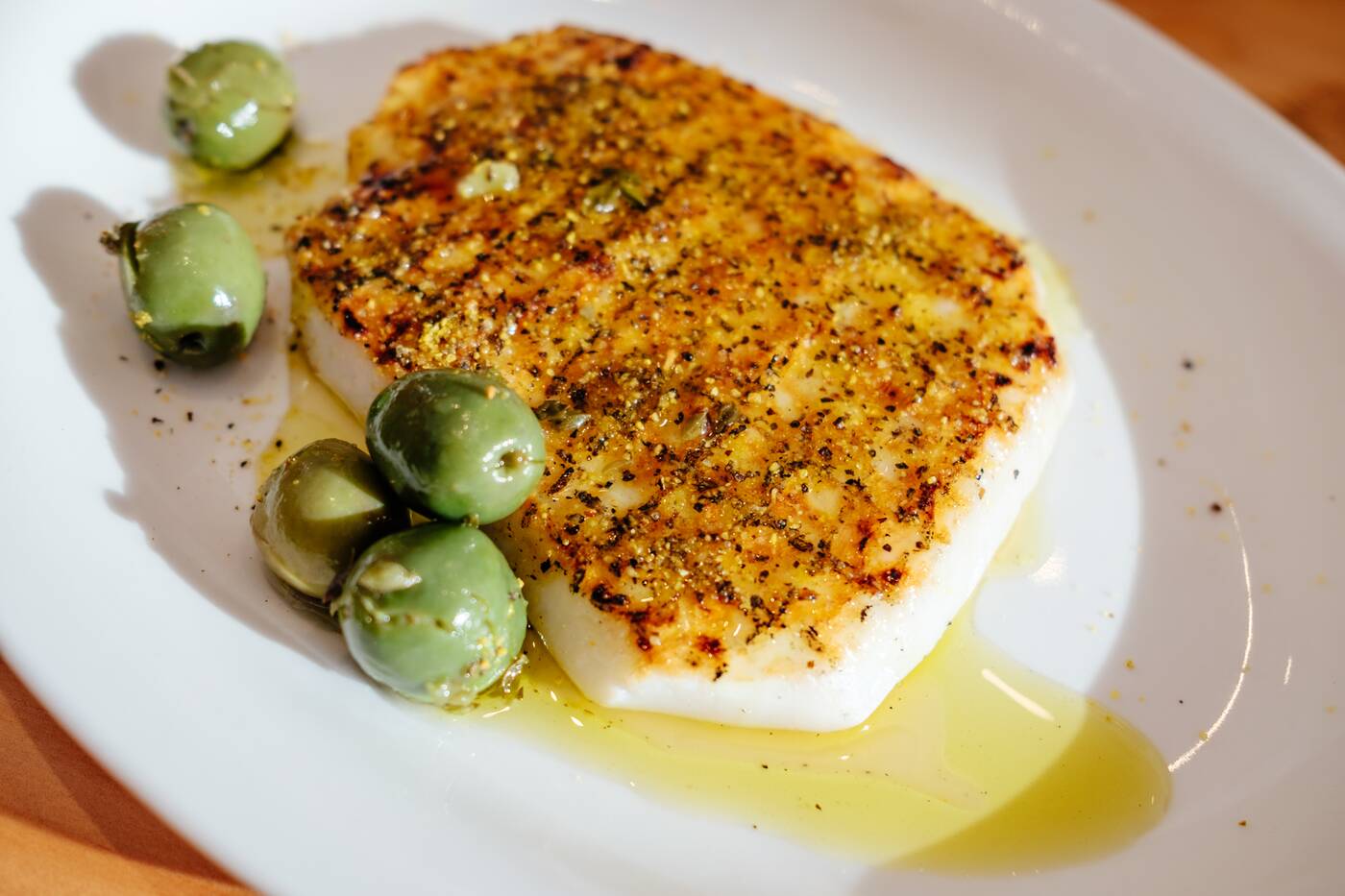 Carter's answer to bar staples like calamari is his Lemon Pepper Squid ($16). Here, a thick steak of Humboldt squid has been prepared over the binchotan. Silky and creamy, the seafood is dusted with a layer of lemon pepper seasoning and served in a shallow pool of olive oil.

Besides a shortlist of beers, sodas, and crushable wines, there are cocktails by bartenders Leah Mucci and Mike Webster – who both met while at Bar Isabel. The well-balanced, simple, and approachable custom-crafted drinks include seasonal numbers such as the Sloppy Rummers ($15). 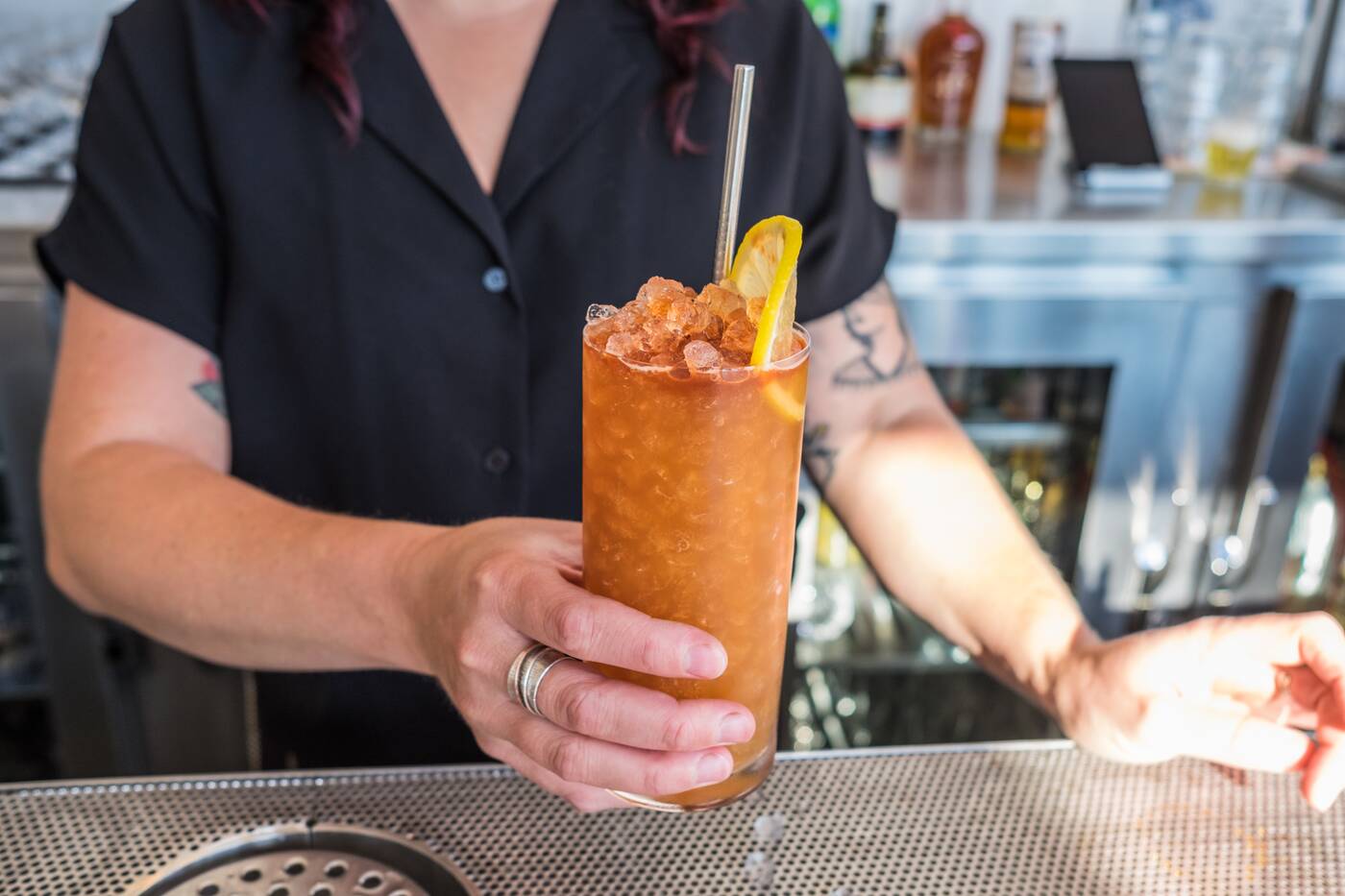 Loosely based on a tiki drink, it contains a double shot of rum, Averna, pineapple gomme, grapefruit, lime, and bitters. It's fun, fruity, boozy, and way too easy to drink. 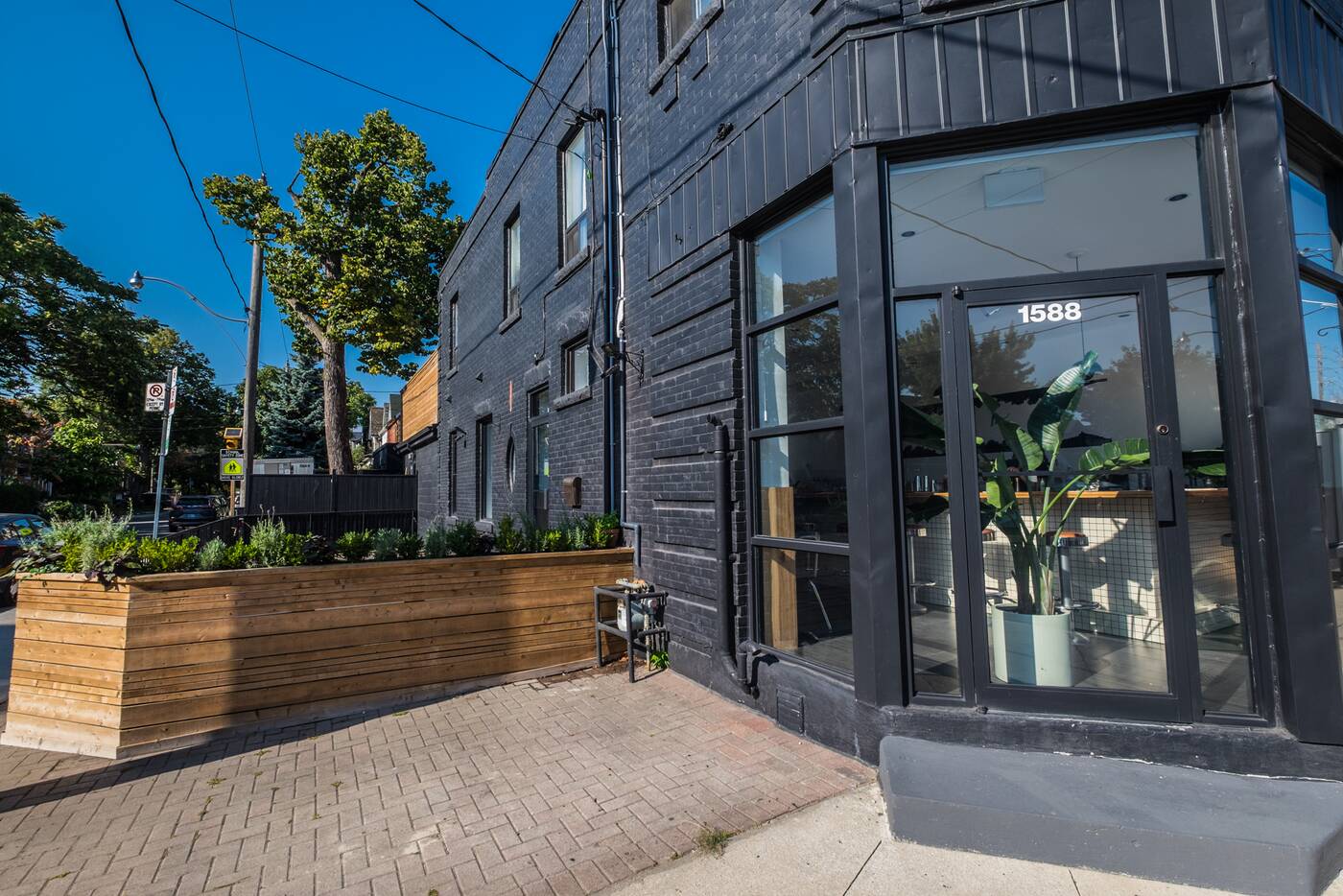 Find Dotty's on the northeast corner of Dupont Street and Franklin Avenue.