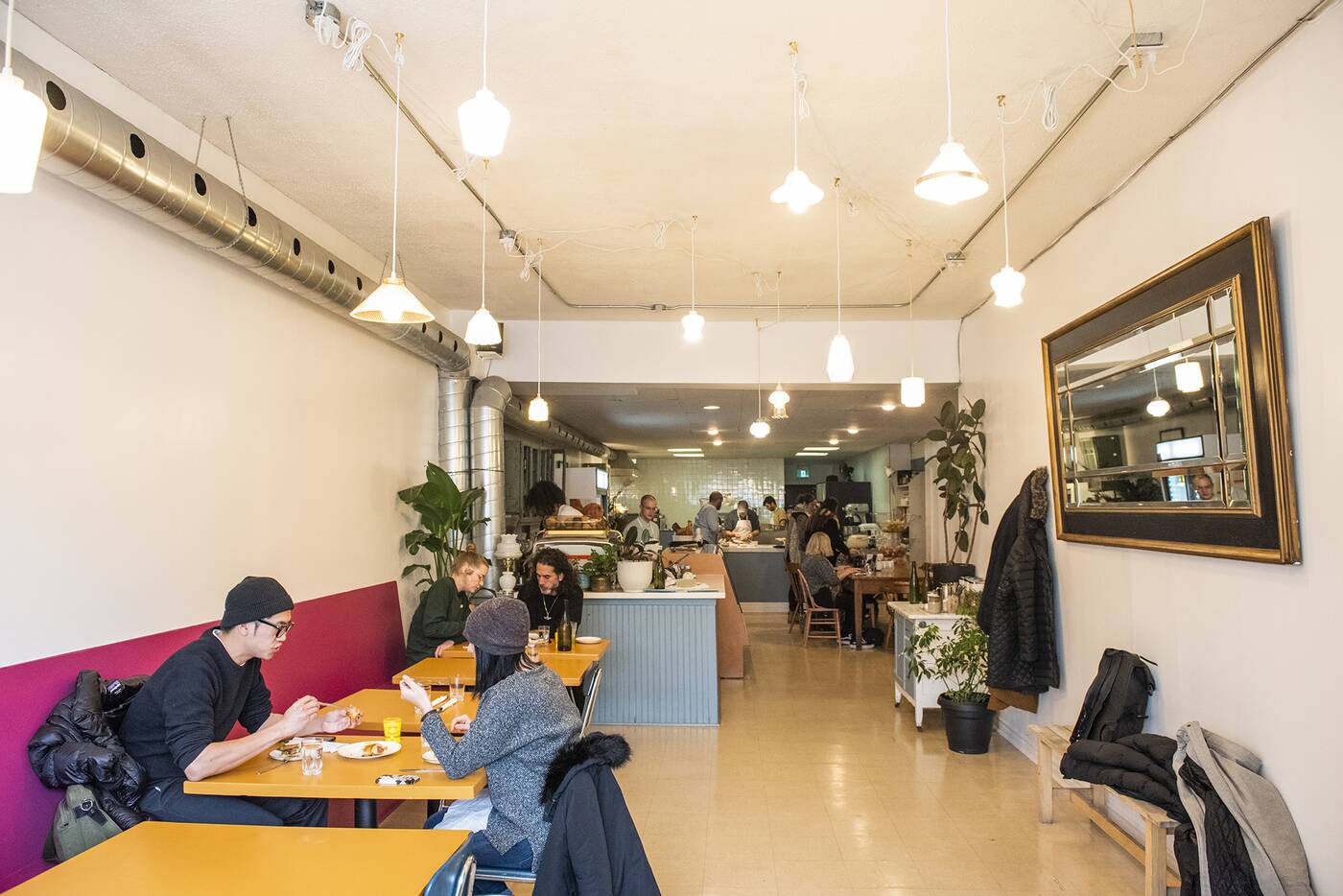 A potato tortilla ($9) is essentially a tortilla espagnole, caramelized onions, egg and neatly layered potato baked in a pan until golden brown and crispy on the outside, tender and creamy but still firm on the inside. 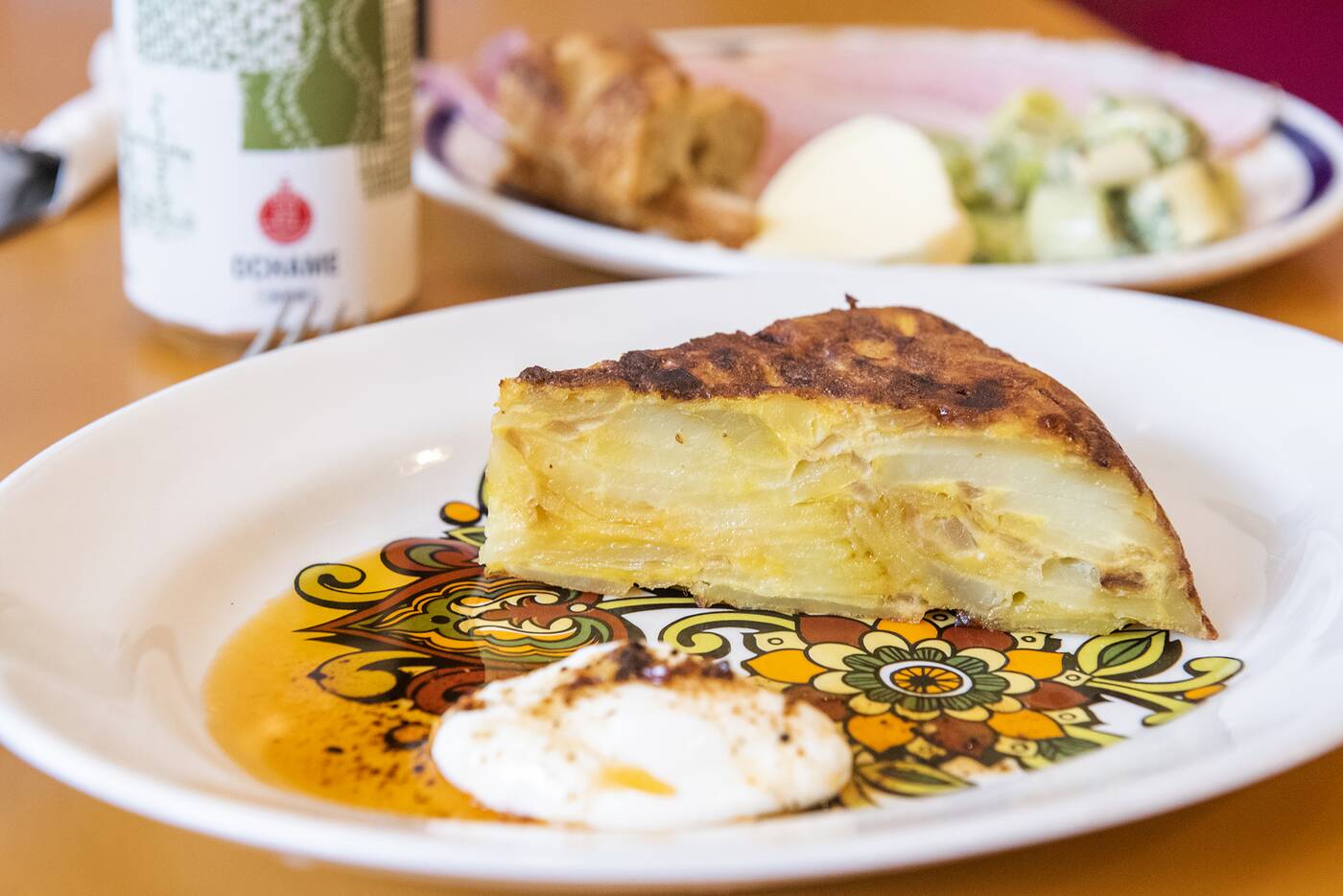 A dollop of sour cream has garlic chili oil spooned overtop for an accompaniment that’s cooling yet smoky and spicy. 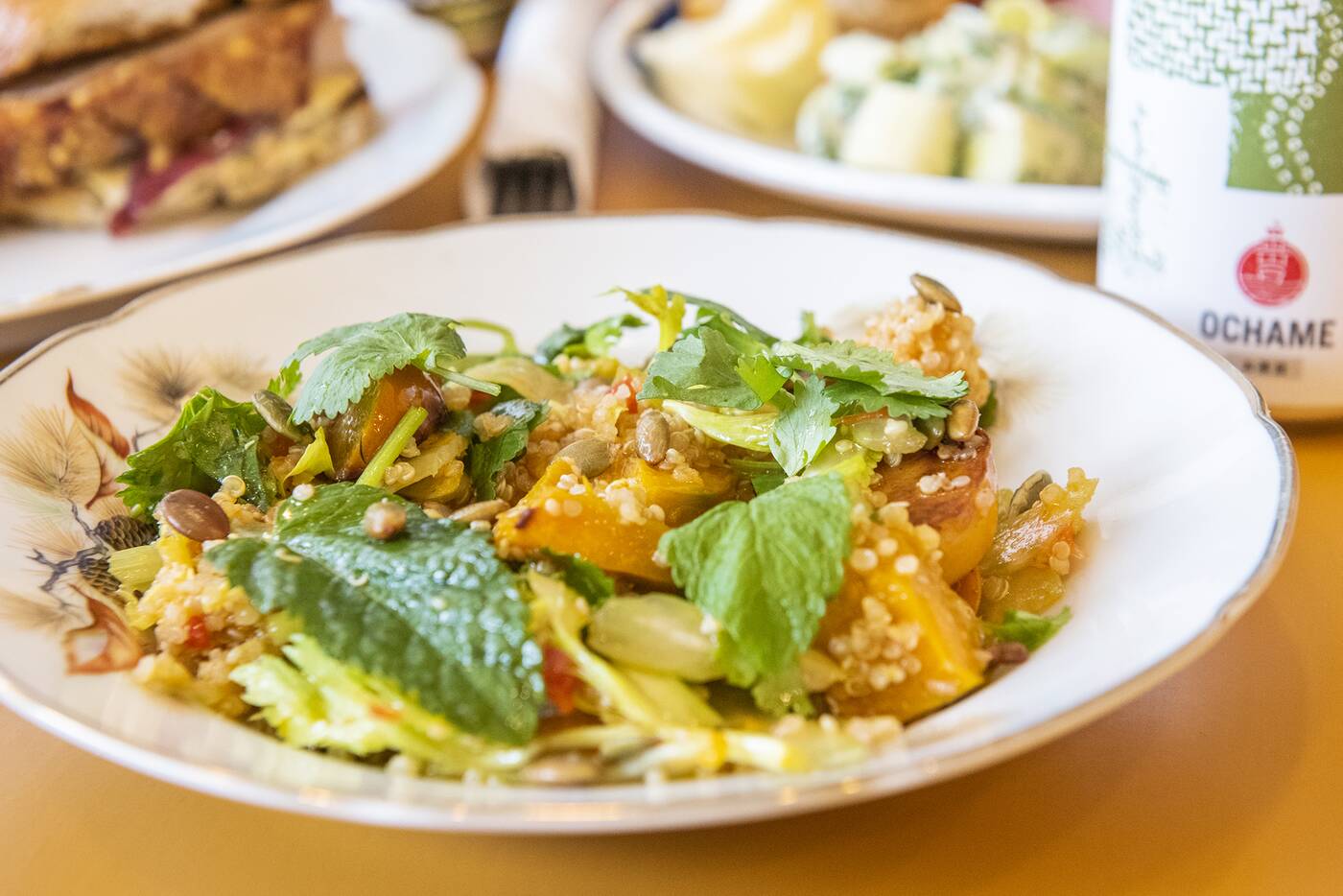 Quinoa salad ($10) is a dark horse, almost more like an Asian salad than the earthy, hippie-leaning flavour profile I’ve come to expect. I didn’t even know you could roast persimmon but now I want it in every salad, juicy and slightly tart yet charred, combined with roasted pumpkin, celery, pumpkin seeds and just the right amount of quinoa.

Cilantro, mint, and a dressing of olive oil, lime juice and house fermented chilies is responsible in large part for the Asian feel of the salad, bringing a bit of heat. 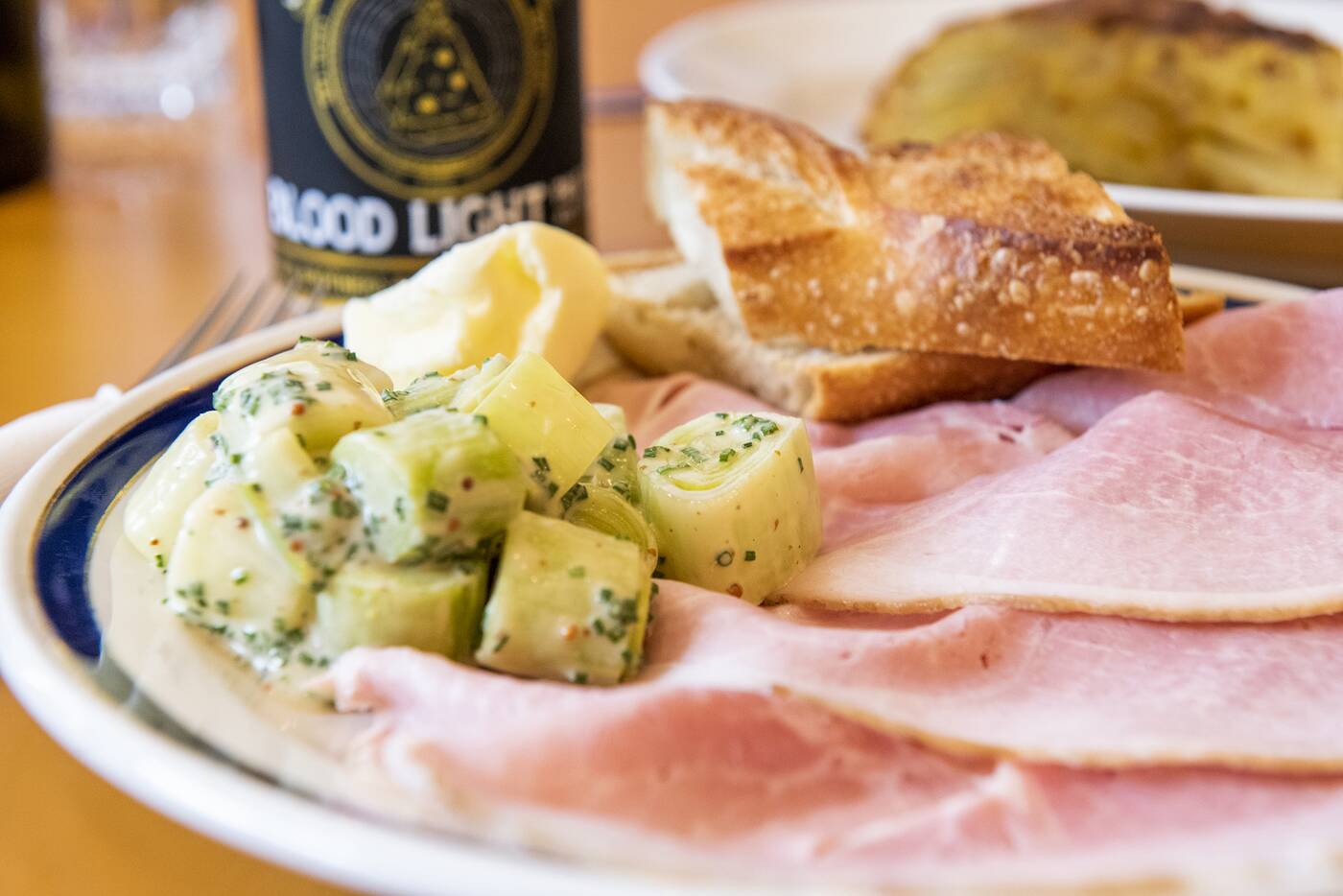 Ham and bread ($15) is almost brutally basic, the blush meat from The Packing House brined, smoked and then roasted on site before being sliced thin but not too thin and lovingly fanned out. 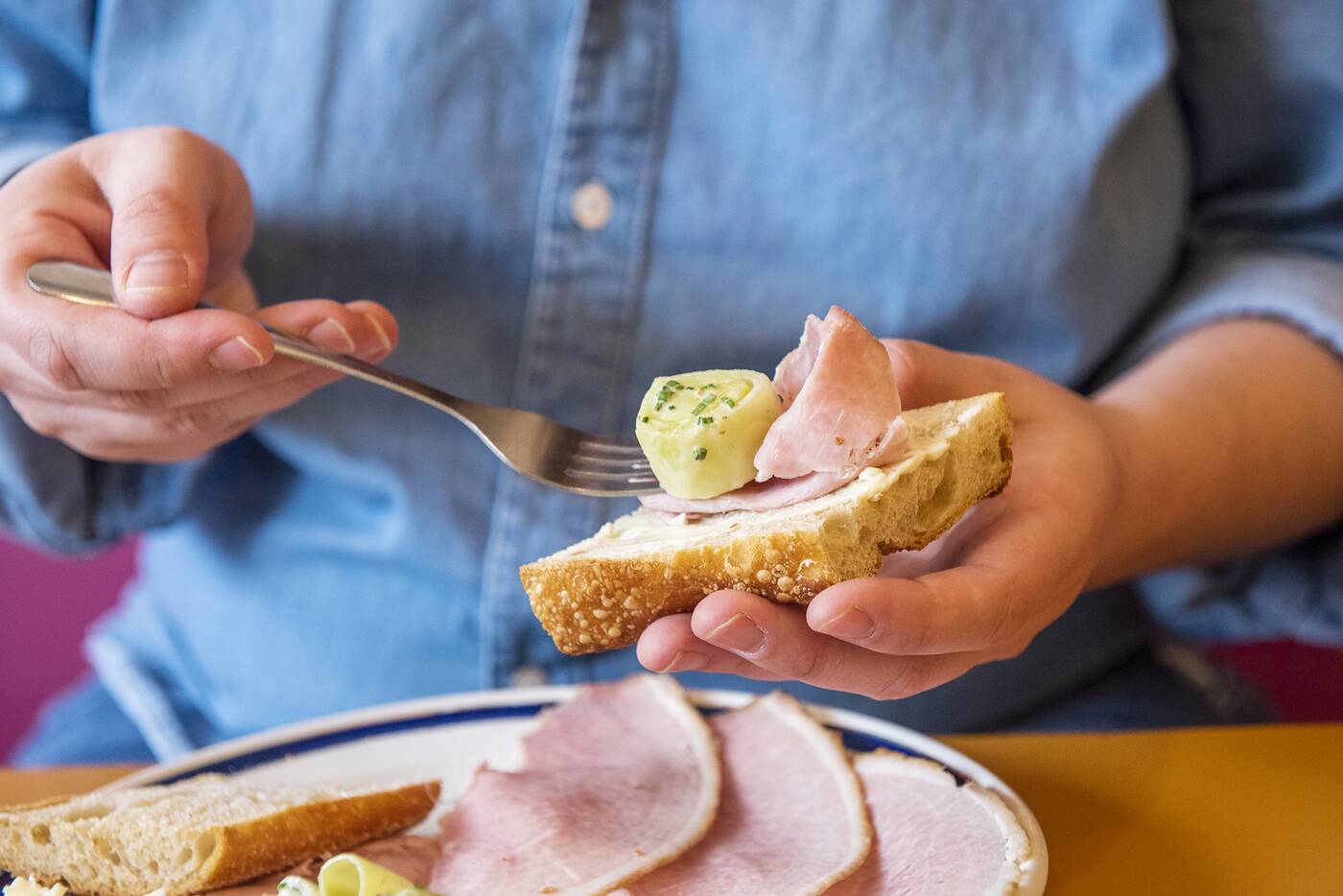 An accompanying leek vinaigrette surprisingly makes this dish, soft and aromatic rather than too raw and potent, lightly dressed with chive and grainy mustard.

Slim pieces of sourdough baguette from the same person who bakes the bread at Paris Paris and generous helping of salt-seasoned butter are the mandatory components completing this quartet. Like everything here each element is pleasant on its own, but together they create unparalleled harmonies. 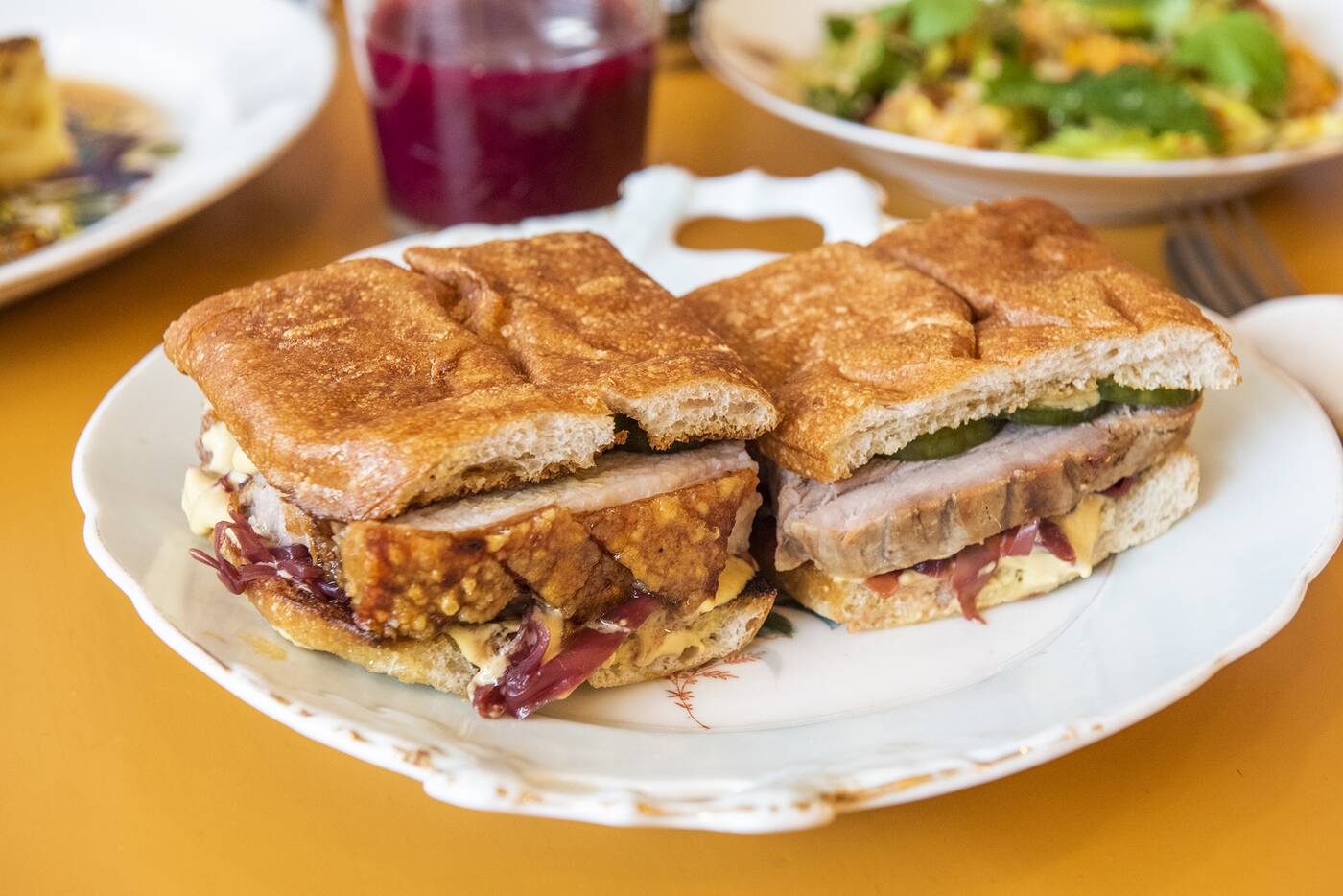 Pork belly ($13) is one of a handful of sandwich choices that also includes Lancashire cheese and shrimp salad. Served on squishy bread with a lacquered golden brown outside, pork belly is also obtained from The Packing House and has a stiff crispy skin that’s almost hard but yields salty satisfaction with a good chew. 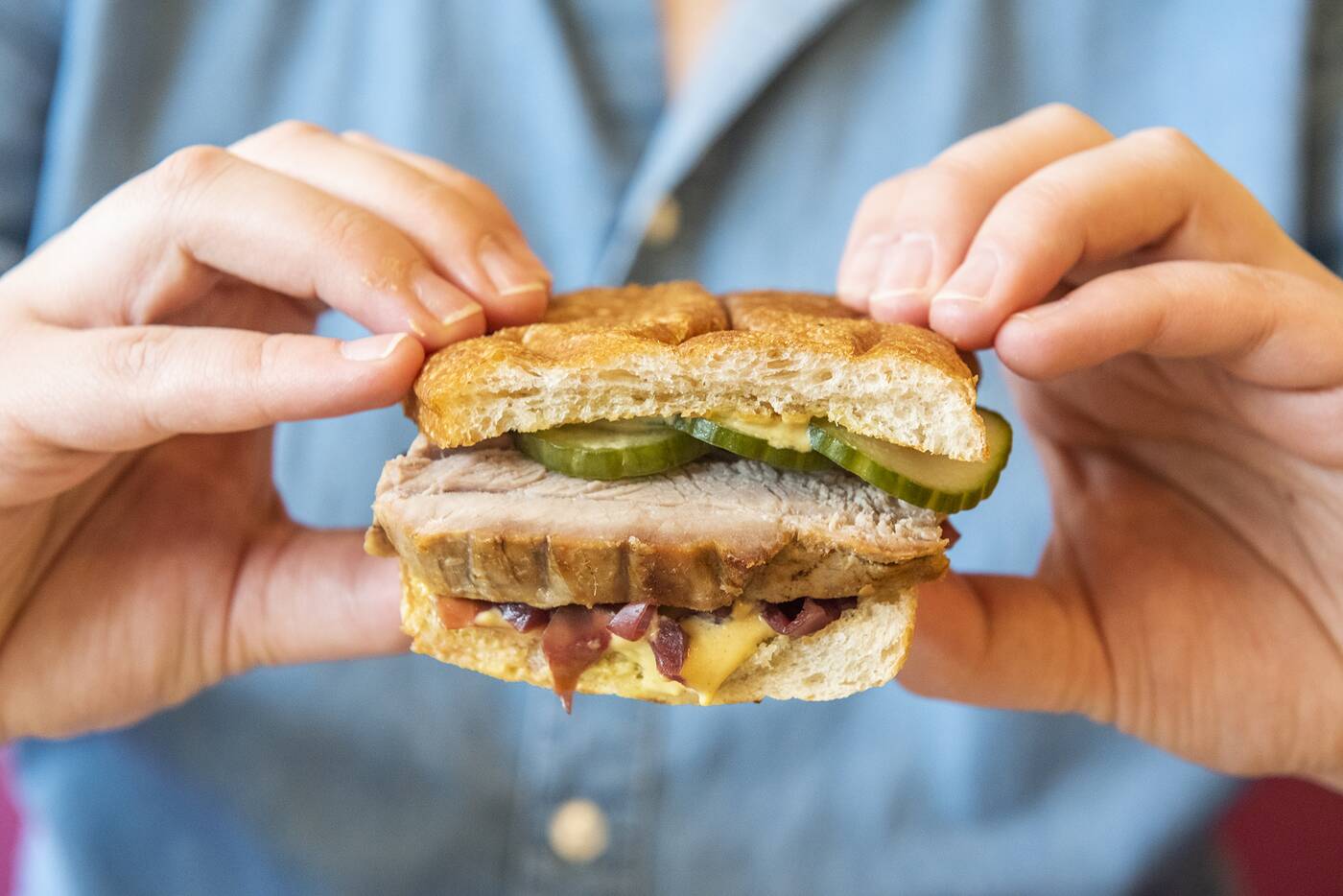 It’s set off by spicy mustard, thin cooling pickled cucumbers, and braised red cabbage that overall make this feel most reminiscent of a classic Cubano. 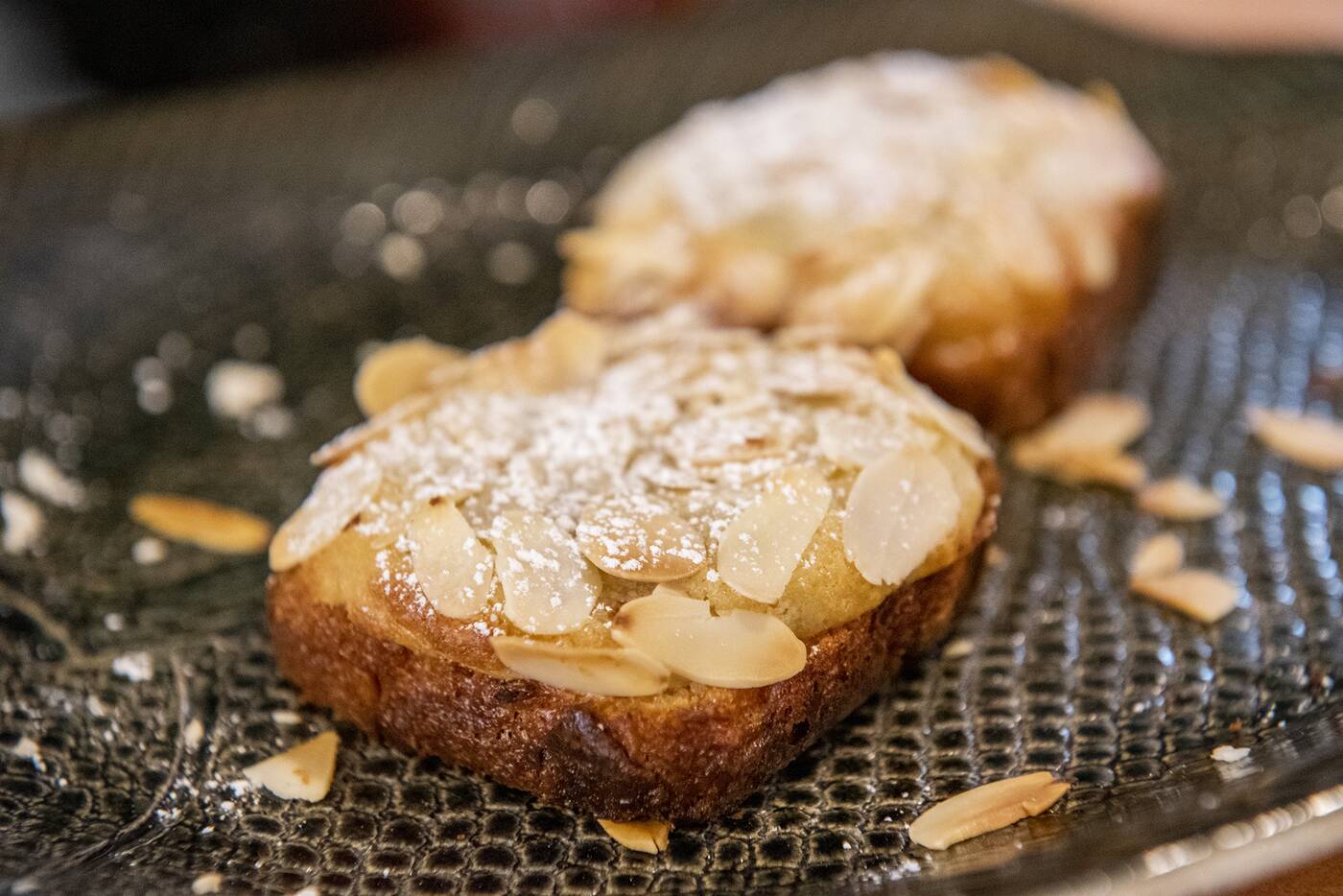 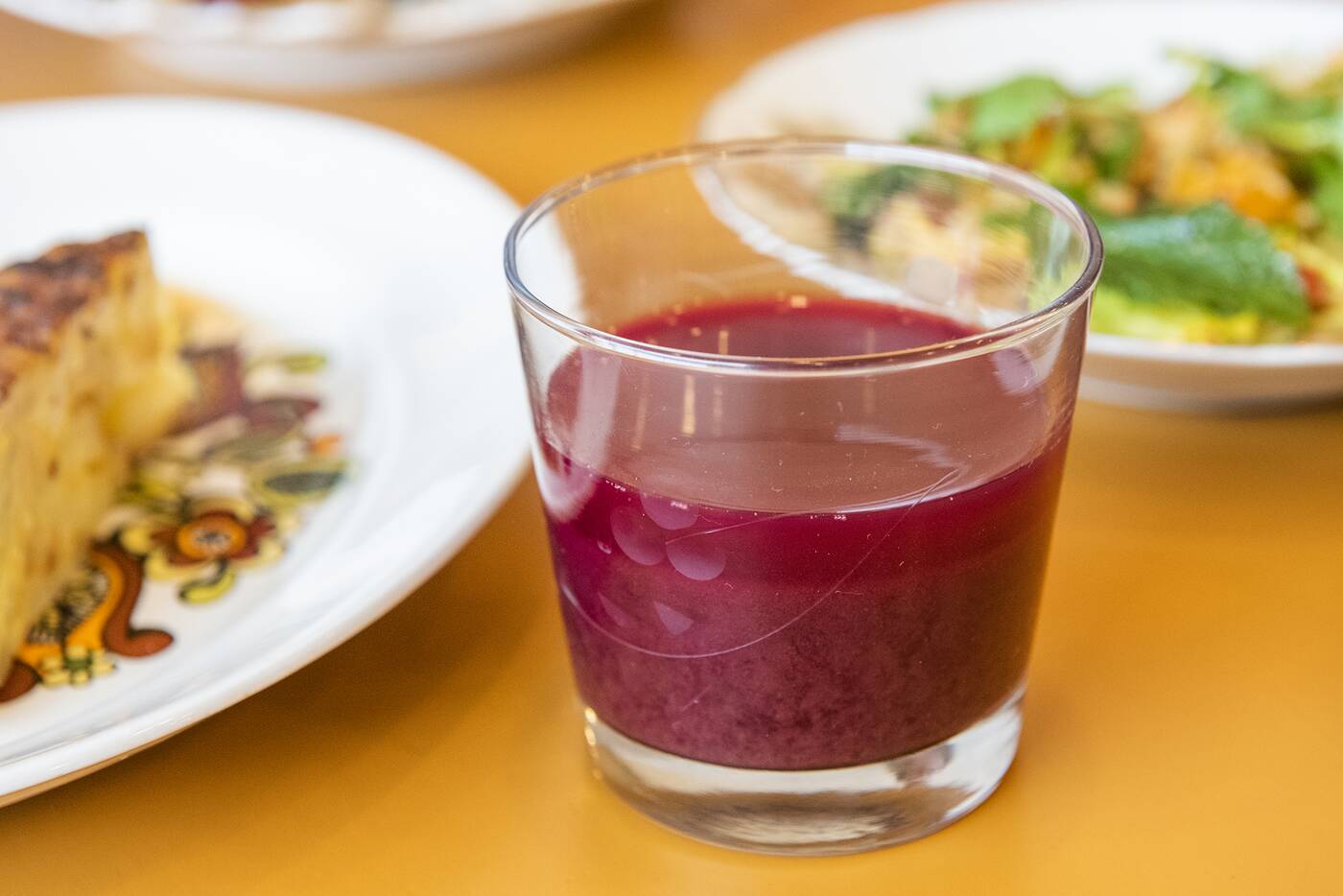 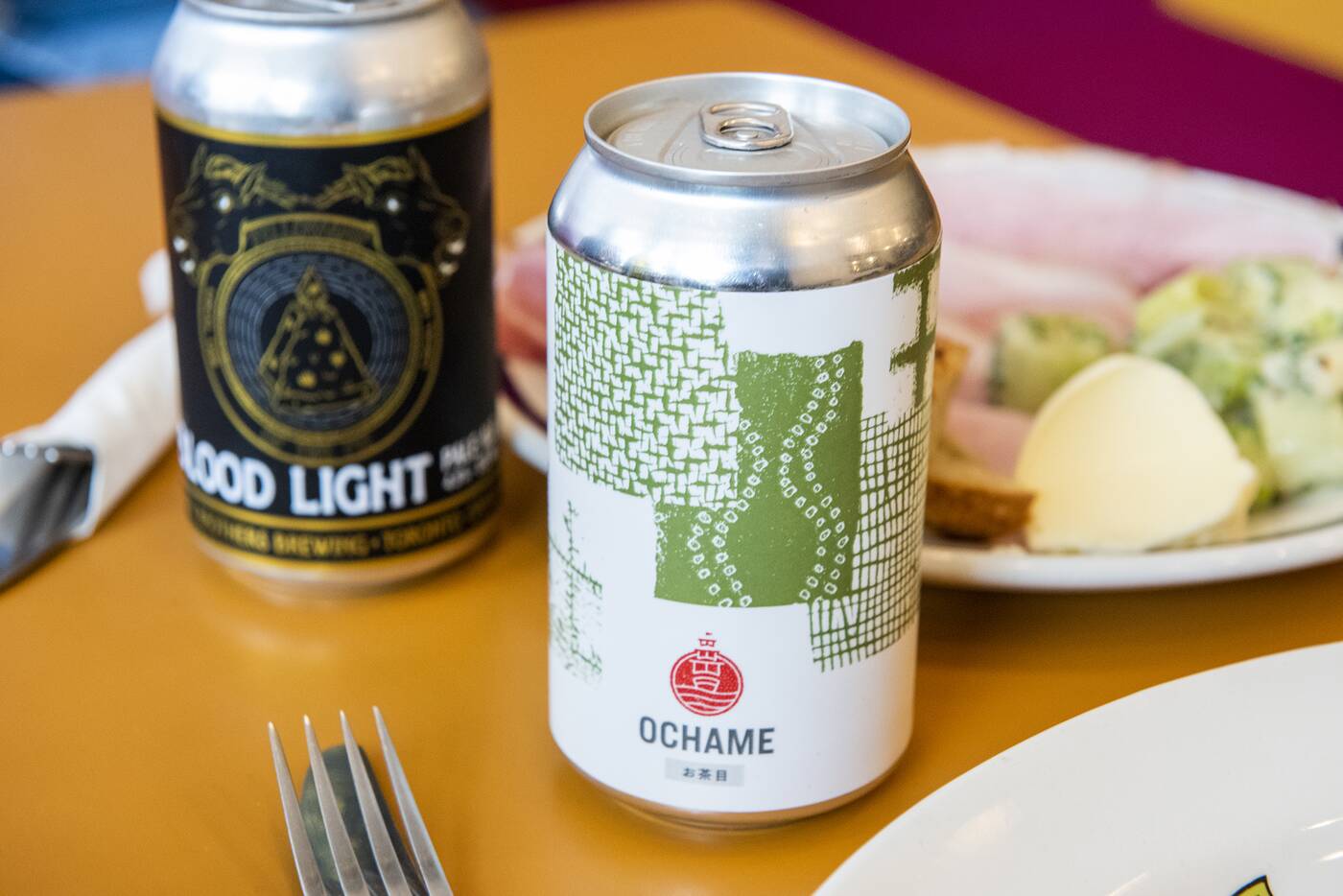 A long list of wines is offset by Burdock, Blood Brothers and Godspeed craft beers ($8) with Bohemian ($6.50) and Labatt 50 ($7) thrown in for good measure. 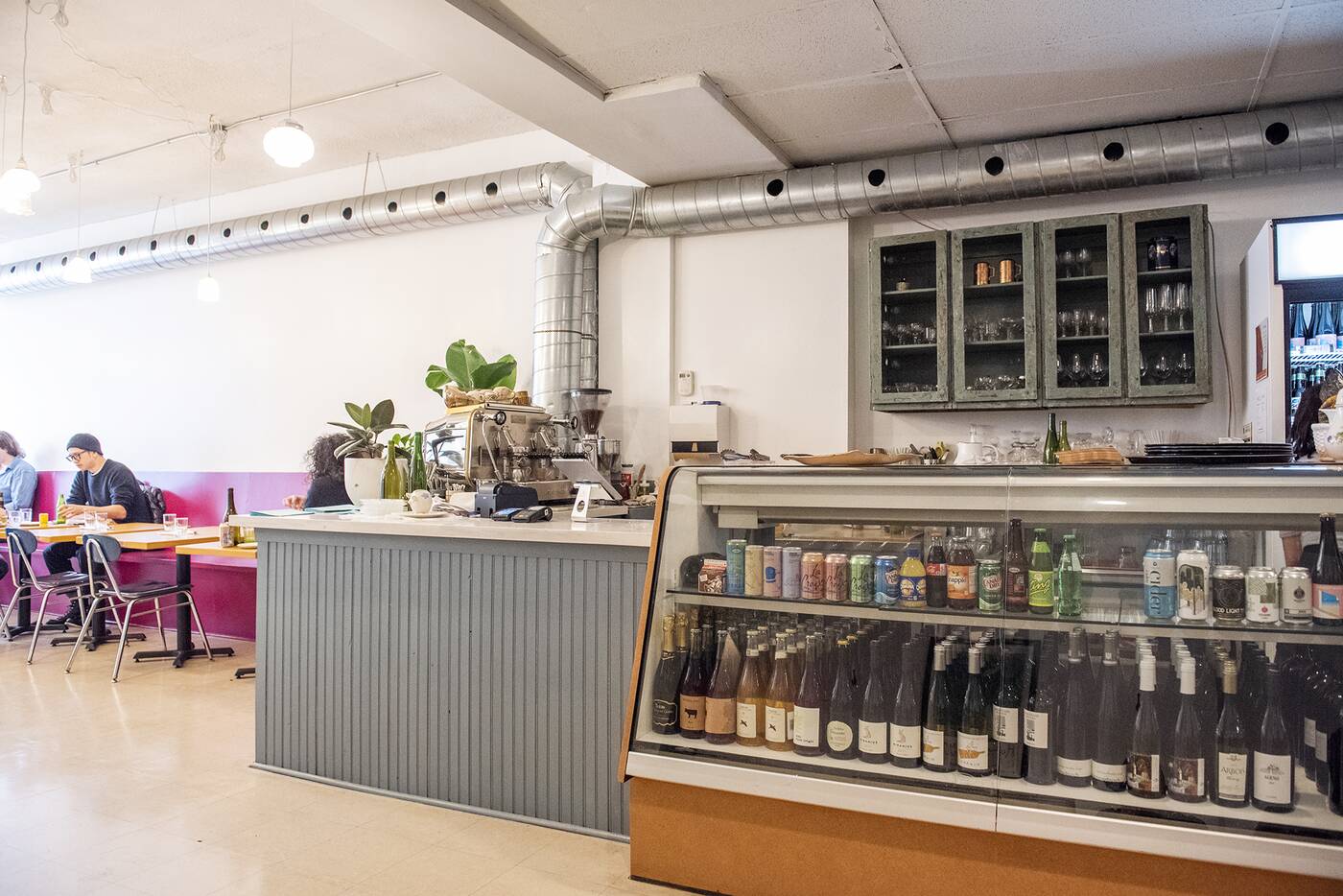 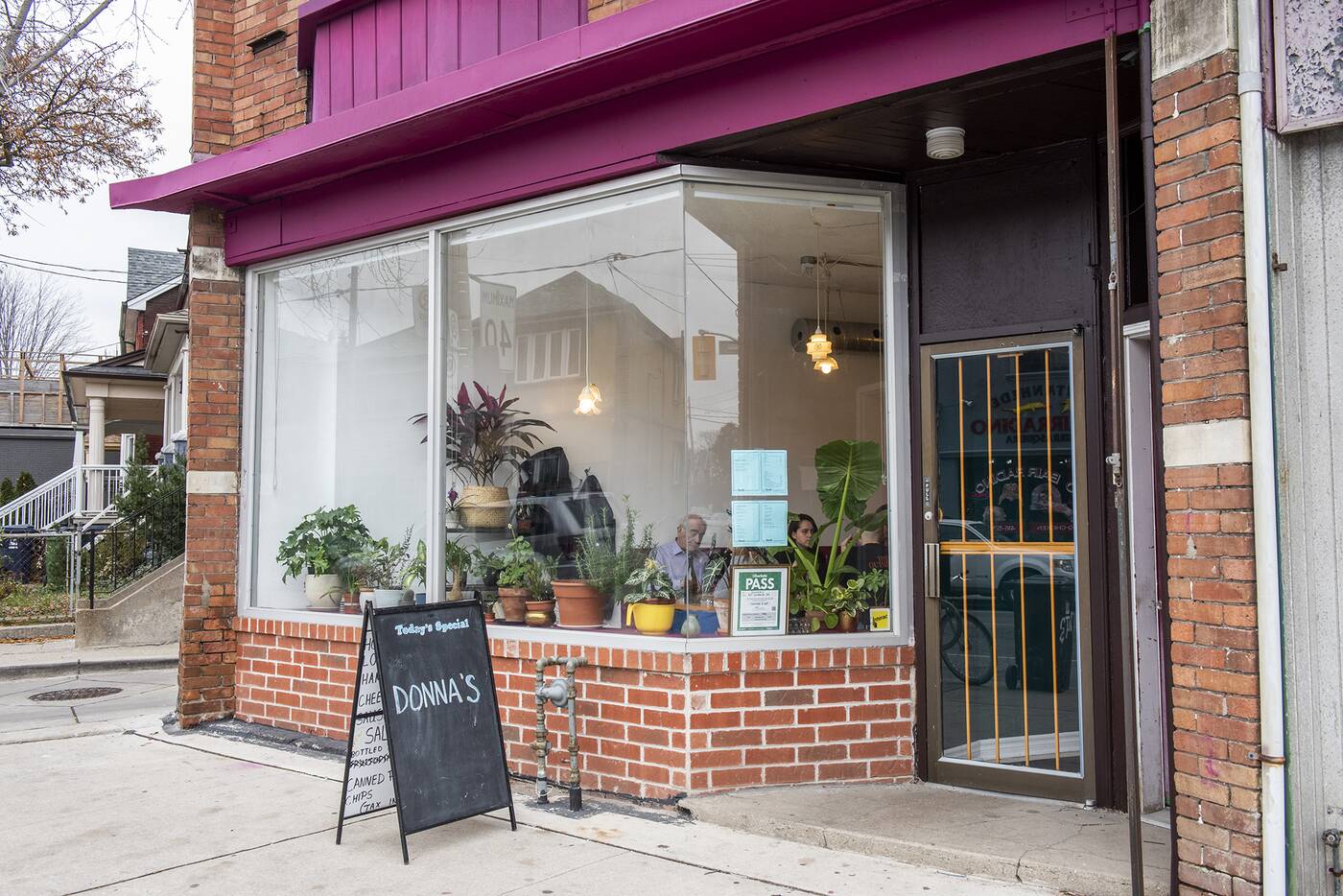